Trade tensions supported the dollar in recent weeks. A reduction in uncertainty should reverse the trend and weaken the US currency over a 12 month period.

The US dollar had been relatively range bound in July, trading between 1.16 and 1.17 versus euro. In early August, amid tensions between the United States and Turkey and uncertainty surrounding US tariffs, the global risk appetite shrunk, leading to higher demand for the USD. The EUR has since recovered part of its losses but remains sensitive to investor’s sentiment and to the geopolitical news flow. As we expect the trade tensions to endure in the coming months before agreements are found and as the US dollar should benefit from periods of risk aversion, we have reviewed our 3-month target to 1.16 (from 1.19 previously) (value of 1 EUR). Over a 12-month horizon and given an expected fall in political tensions, we think that the euro has room to appreciate versus the US dollar. Moreover, fundamental factors should start to re-assert themselves along the USD overvaluation and the lower monetary policy divergences. We target the EUR/USD at 1.22 in 12 months.

The British pound depreciated in July and August, going from around 0.88 to 0.90 versus euro. The pound started to fall after that Prime Minister Theresa May, who had finally disclosed her plan for a soft Brexit, appeared to make concessions to hard Brexit supporters. The GBP was then affected by various UK officials pointing to the increasing probability of a no-deal Brexit. The GBP recovered part of its losses in early September following conciliatory comments from the EU Brexit negotiator. Overall, few progress has been made in the past couple of months while the date set to finalise the Withdrawal Agreement is fast approaching (mid-October). Our base case scenario remains one where a relatively soft Brexit prevails. We however think that the pressure on the GBP could be material in the coming months as negotiations intensify. As a result, we now target the GBP at 0.90 in 3 months (from 0.88 previously) and maintain our 12-month target at 0.88 (value of 1 EUR).

The Swedish krona bounced in early July, on the back of upbeat inflation data and reduced short SEK positioning, but the appreciation failed to hold when the global risk appetite deteriorated in August and investor’s turned more cautious as Swedish election approached. The SEK currently stands around 10.5 (value of 1 EUR), close to levels not seen since the 2008 crisis, while the country’s situation is very different from what it was ten years ago. We are still positive on the SEK but reviewed our targets given investor’s cautiousness and the fact that trade tensions could persist for some months. We now target 10.3 in 3 months (from 9.8 before) and 9.80 in 12 months (from 9.30) (value of 1 EUR). 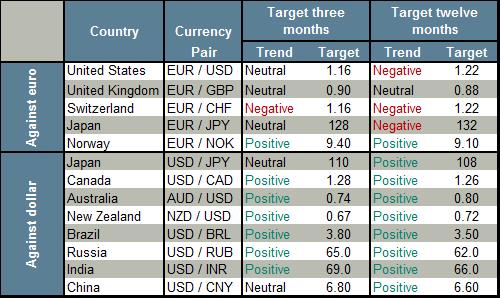