Following the regulatory tightening in the internet and fin-tech sectors, Beijing announced tightening measures on the country’s for-profit tutoring sector.

As the crackdown is far more drastic than widely expected, this triggered a collapse in investor confidence and a big slump in Chinese equity markets, particularly growth stocks.

The series of policy actions – first with the Ant Group IPO, followed by anti-trust fines for the big techs, then post-IPO investigation into Didi, and the most recent the private education companies – would just amplify investor concerns over who will be the next candidate(s), and when will this end.

What are the key driving factors of the regulatory changes?

In the short term:

(1) The economic impact of the clampdown on individual companies and sectors as well as the recent equity rout should be limited and would not derail the cyclical recovery in China. Exports remain near record levels. Vaccinations are accelerating and any increase in virus cases are to be watched as services growth has lagged among high savings rates.

(2) The impact of the shakeout in stock prices on the stability of the financial system should be minimal as margin debt is only 2.2% of total domestic market cap. After the recent RRR cut, the PBoC may ease liquidity sooner than expected if required amid concerns over short-term liquidity drain. Local government spending budgets are still under allocated and could be accelerated.

(3) The weakness seems to be ring-fenced in companies and sectors that are under strong Chinese government scrutiny. There is not much evidence of direct global equity and commodity markets contagion so far, a signal that the market does not see great macro consequences to the government crackdown. For example, economically sensitive base metal prices have risen during the current period of uncertainty as well as global equities.

In the long term:

(1) Inequality policy issues remain a headwind. There is potential for more swift decisions by Beijing to maintain social cohesion. Chinese companies with a monopolistic advantage or are seen as exacerbating socio-economic issues could be subjected to significant regulatory oversight. This is also a growing global trend in the technology sector, but moving faster in China.

(2) In the short  term, the regulatory uncertainty raises the risk premium of Chinese companies. Private businesses looking to raise capital could find it more difficult amid growing investor concerns over an unsteady business operating environment, which in turn could have a negative impact on economic growth. At the same time, Hong Kong would benefit as a listing centre for capital. Attracting foreign investment and currency stability are also medium-term policy goals.

(3) It remains to be seen whether this is a systematic retreat from market-oriented reforms or just an effort to rectify bad market behaviours. Anti-monopoly measures and other regulatory changes, if enacted, could be beneficial in the long term and boost innovation. In addition, don’t forget China’s dual circulation strategy which emphasizes indigenous innovation. The private sector would still likely need to play a key role in this regard. Therefore, the proper lens could be shades of grey rather than a black and white outcome.

China internet sector’s boom and bust in 2017-18 was related to the government’s measures to limit the impact of mobile and video games on the younger generation. The policy tightening was milder, but the sector still corrected by 42% from its peak. The internet sector stayed flat for about 2 months after the big decline and then regained traction. However, for other policy-driven meltdowns, such as Macau gaming due to the anti-corruption campaign in 2014 and the pharma sector on drug pricing reform in 2018, it took about 9 months for re-rating catalysts to emerge.

This time, the policy risks are more widespread and persistent. The overhang on China’s growth sectors could sustain longer than our previous expectations. Furthermore, given the still high earnings forecasts, we should expect a period of earnings downgrade in the near term. In the medium term, value could be emerging in selected technology companies and related sectors. 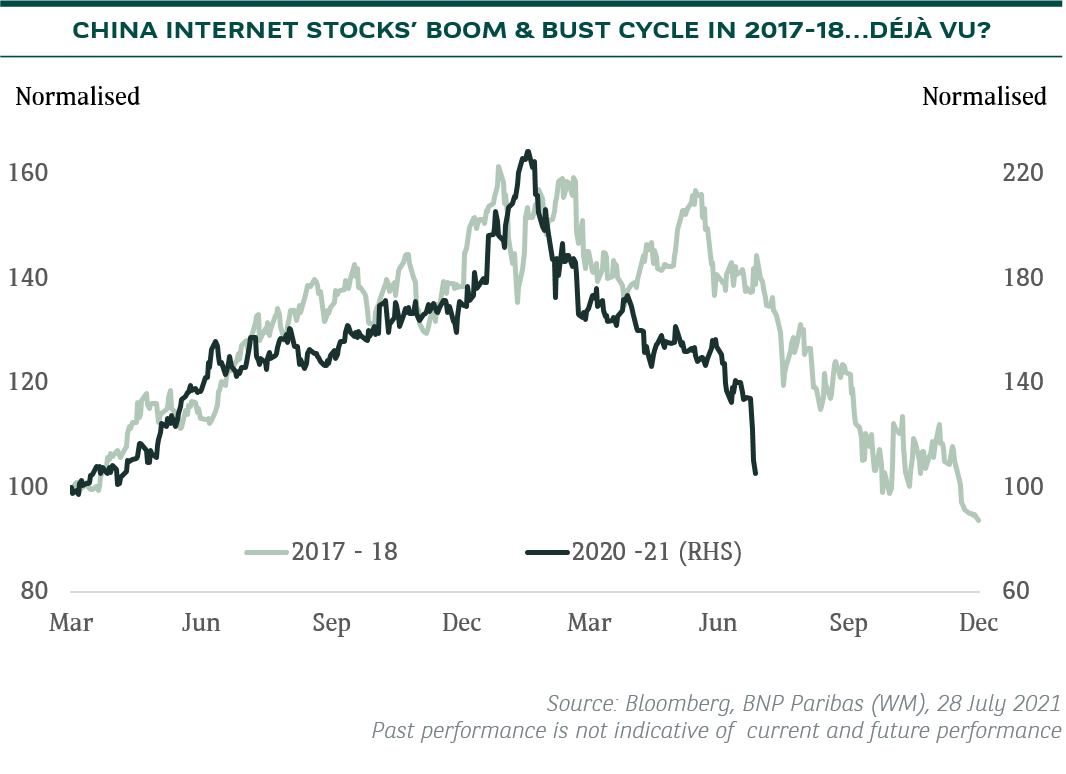 As regulatory uncertainty remains high and short-term catalysts are lacking, it seems premature to bottom-fish the heavily de-rated growth stocks at this moment despite more attractive valuations.

Markets need clarification in terms of details and scope of the administrative control measures. It may take a longer period of time for policy uncertainty to subside and market to re-gain confidence. That said, there will be some short-covering and opportunistic buying especially if there are further liquidity easing measures.

Domestic A-share markets with only tiny exposure (~1%) to the internet, fin-tech and education sectors would be fundamentally less affected. Nevertheless, as key technical levels of both domestic and offshore Chinese stock indices are broken, market sentiment onshore and offshore may continue to be weak in the near term. 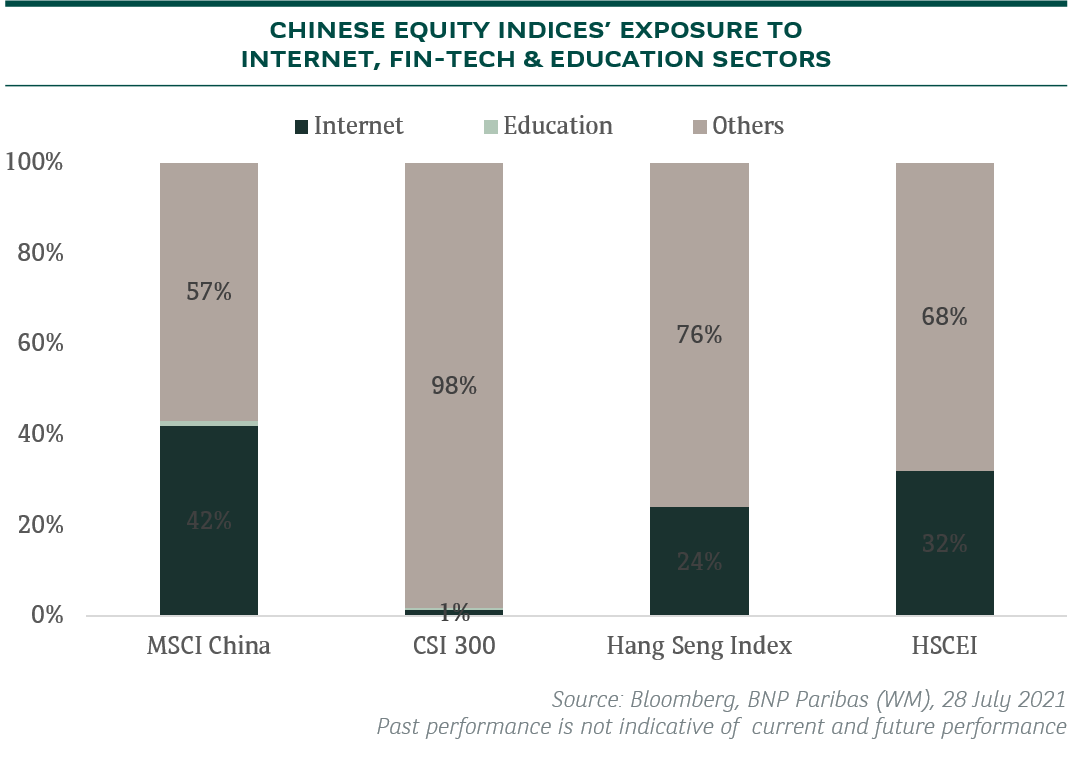 In view of market volatility, we recommend a more defensive stance on Chinese equities, focusing on high dividend and value stocks. Severe weaknesses are buying opportunities for “green” megatrend themes, such as 5G, AI, electric vehicles, selective materials and consumption sectors. These sectors have performed well and are seen to benefit from current policy stance.