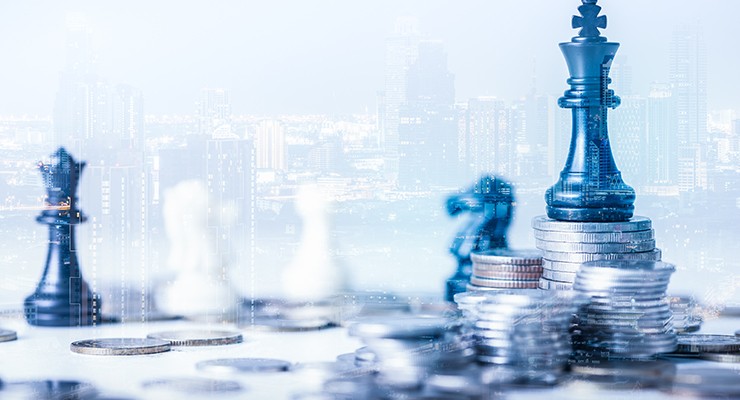 ·       In early 2020, equity markets continued rallying but this momentum was abruptly stopped by the double black swan,  i.e. Covid-19 and the excess supply of oil in global markets due to Russia and Saudi tensions. The oil price collapsed. Consequently, we downgraded risky cyclical sectors, i.e. US Banks and US Energy from + to = as they shall be badly hit by the adjustments expected in the oil market and by credit defaults.

·       We have become more defensive in our sector allocation with Health Care globally upgraded from = to + and Consumer Staples from – to =. We also like Insurance globally (+) because it is too cheap as well as the European Energy, Technology and Construction Materials for similar reasons.

·       We still recommend caution on Industrials (-) as it will take time for many companies and consumers to repair their balance sheets and invest again. Cost-cutting is now across the board.

·       We are reaching the height of the earnings season for 1Q20 in the US. Corporate results and, more importantly, guidance provided, could affect our sector recommendations.

The economic and equity market dislocation provoked by the Covid-19 have prompted us to modify our sector allocation to a more defensive stance.

·        US Energy from + to = (Energy overall stays at + as the sector is cheap, mainly European oil Majors and we expect an oil price recovery by the end of 2020): not much has been done recently to support the US oil & gas industry following the recent “double black swan” (Covid-19 & political tensions between Russia and Saudi Arabia precipitating the oil price collapse). It could be that the US administration prefers oil prices to stay low for a while to support the recovery (?). The international agreement to reduce oil supply from 1 May by around 10 million barrels/day seems insufficient compared with the ongoing collapse of demand, estimated in April at between 20 and 30 million barrels/day. Supply will have to shrink further. US shale oil (and the US Energy sector in general) will suffer more, especially in the absence of significant government support. European oil Majors (+) are barely exposed to shale oil, they have strong(er) balance sheets and pay better/more sustainable dividends.

We recommend sticking with the strongest companies as these have more chances to survive the crisis, not only in the Energy sector but in all sectors.

Other recent changes (made on 9 March):

·        The Health Care sector was upgraded on 9 March from = to + after a weak performance at the beginning of the year. Mr Sanders threw in the towel ahead of the US presidential election. Therefore, no far-reaching reforms in the sector are currently expected. Moreover, the market correction had been too steep in this sector, considering that it will suffer less from the crisis, and even benefit from it in some instances.

·        Consumer Staples were upgraded from – to =. This sector also fell during the general equity market dislocation whereas some segments (in particular food retailing, but also household & personal care products, healthy food, snacks, etc.  on the back of the ‘Stay at home’ campaign) should perform well in the current environment.

·        Conversely, we downgraded US banks from + to = (and the financial sector in general). Although the financial sector is generally not expensive, the economic crisis will affect it, particularly US banks due (among other) to their exposure to shale oil and gas. Energy sector will face bankruptcies as well as other sectors (leisure, transportation, aeronautics and other industries, etc.). Nonperforming loans shall rise. Given that the extent of the crisis remains unknown, it is better to stay cautious, especially as the US yield curve is much more unfavourable now compared with early 2020. US banks are booking huge provisions and reserves. Among financials, we prefer the Insurance sector (+) that at the trough of the markets this year dropped by -40% (which we considered ad too excessive) before many companies and analysts confirmed the strength of the sector. Solvency has in some cases doubled over the last 12 years (from around 100% to 200%)! P/E ratios in Europe are now around 7-8x and dividend yields look relatively secure at around 6.6% (though many dividends could be paid only at the end of the year).

March was extremely volatile and started very badly. Later on, huge monetary and fiscal policies measures were voted on both sides of the Atlantic, cushioning the economic shock. This allowed the market to stabilise in the short term, and recover somewhat since the low of 23 March. Since the beginning of the year and particularly in March, defensive sectors have clearly outperformed. Technology is also holding up relatively well.

Healthcare (+), was the best-performing European sector in March (a similar picture in the US) whereas most cyclicals performed poorly. Furthermore, the Consumer Staples (upgraded from – to =)  did well. In early March we turned more cautious on Finance overall (from + to =) due to the looming economic crisis. Whereas US banks (=) will face bankruptcies in the Energy and other sectors, many consumers will not be able to pay back their loans and credit card bills. European banks (=) are also suffering from the ECB’s decision to ban the payment of dividends this spring (see our recent Strategy Flash on our general expectations of dividend payments). Albeit likely a temporary situation, European banks have lost one of their key attractions. Visibility on dividends has deteriorated and some banks could been tempted to structurally ‘reset’ their dividends at a lower level.

In tech, we continue to favour Europe (+) as well as the 5G and e-commerce themes globally. Consumers and employees are confined to their homes. This requires better internet connections, and is leading to an accelerated development of leisure and shopping on the web.

As the global economic recovery looks too weak at present to support significant increases in raw material prices, we remain neutral on the Materials sub-sectors such as Chemicals, Mining, Steel and Metals. But we like European Construction Materials (+), because they are expected to benefit from public spending plans and are cheaper than their US counterparts. Gold mines also have potential, in accordance with our positive stance on gold.

For other sectors, the medium-term impact is less clear and we are not changing our views. The Industrial sector (negative opinion) remains very risky and will take longer than other sectors to recover. In addition to the ailing Aeronautics sector, we expect a postponement or even a significant decline in industrial investment in the private sector. The final impact of Covid-19 is still very uncertain and we therefore expect persistent volatility at least until we have more clarity during the ongoing 1Q20 earnings season.

The Consumer Discretionary sector (neutral opinion) is also at risk but the impact of the current crises on final consumption is still uncertain while the drop in oil prices shall support the economic recovery. As mentioned many times, this is a very disparate sector today. It has several 'big winners' of new consumer trends. Conversely, in the short term, we would continue to avoid stocks linked to traditional leisure (restaurants, cinemas, theme parks, etc.) and travel in general. It is necessary to be selective and to favour a thematic approach for this sector, as well as for Communication Services, Utilities and Real estate (neutral recommendations).

Please find attached the PDF that contains all annexes.