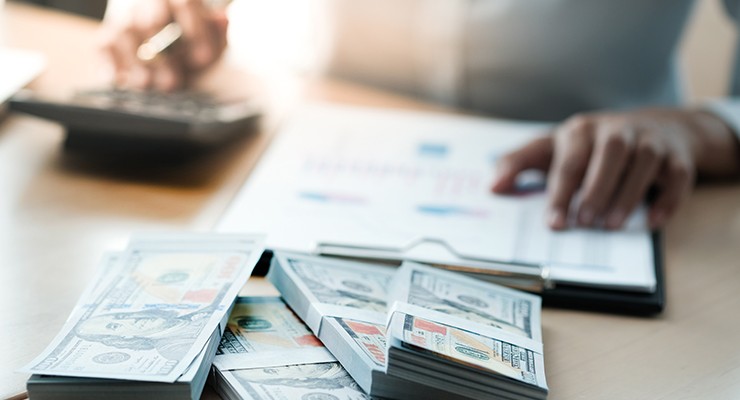 The EURUSD was almost flat in December around 1.13. It has broken the 1.12 level at the end of November and rose since then. We see the 200 day moving average around 1.14 as a strong resistance and the 1.12 level as a key support.

US Inflation remained high in December, reaching 7%. At its December 15th  meeting, the Fed announced the end of its pandemic-related purchasing program.

During its January minutes, the Fed announced that the labor market was tight, and that inflation was highly concerning, implying a more aggressive monetary policy than expected. We now expect the Fed to hike rates as early as March 2022 (from June previously). In total, we now forecast four rates hike (three before) by the US Federal Reserve in 2022 followed by four more in 2023, with quantitative tightening (reduction of the balance sheet) that should be announced in July and should be started in August. The high inflation in the Eurozone in December at 5% year-over-year increases the pressure on the ECB. It has announced the end of the PEPP for March and will replace it by the APP for 6 months. We forecast a first ECB rate hike of 10 basis points in June 2023.

Mobility restrictions in Europe will affect economic growth in the short-term and reduce the likelihood of economic momentum catching up relative to the US. This is consistent with the dollar remaining  strong.

Some appreciation in December

The GBP appreciated against the euro in December in the context of a 15bps increase in the policy rate by the Bank of England (BoE). 67% of of analysts expected the Bank Rate to be unchanged at 0.1%. The GBP broke our 0.84 target and the Pound is near a two-year high.

The inflation rate in November reached 5.1% and should peak around 6% at the end of Q1 2022 driven mainly by energy prices. The BoE policy rate now stands at 0.25% and we expect another sequence of increases throughout 2022 and 2023. The next rate hike could be as early as February if inflation pressures remain as strong.

The December services PMI came in at 53.6, a ten-month low explained by lack of staff and Omicron uncertainties. Business managers note that export sales are strongly affected by the pandemic restrictions. The UK GDP is still 1.5% below pre-pandemic.

The higher interest rate differential seems to be largely priced and we expect EURGBP to remain stable around 0.84. The European Central Bank is likely to be less accommodative in its tone due to the high inflation in Eurozone and it should sustain limit the strength of the GBP relative to the euro.

We forecast the EURGBP at 0.84 (value of one euro) over the coming year (lateral move).

Regarding the GBPUSD, our 3- and 12-month targets are at at 1.33. This suggests a slight depreciation of GBP.

Recent CHF strength should be temporary

The Swiss Franc appreciated in December and fell below 1.04 (value of one euro) for the first time since January 2015.

Several Eurozone economies will be heavily impacted by the Omicron variant. In this context, the good fundamentals of the Swiss economy are reassuring and therefore the CHF has appreciated. Moreover, the Swiss economy continues to have strong momentum. The inflation rate for 2021 should stand around 1.1%, far below other developed markets.  The December manufacturing PMI business reached 62.7 explained by strong employment. Delivery times continued to decrease.

We however remain bearish  on the Swiss Franc for two key reasons. The economy should normalize in 2022 in the Eurozone and services should regain economic momentum. Secondly, the Swiss National Bank has given no indication of a future rate hike and thus remains the central bank with the most negative rate, standing at -0.75%. The SNB reiterated that it considers the CHF to be « highly valued ». It will probably remain vigilant and could intervene in case of a too strong appreciation as exports represent more than 65% of GDP.

We keep our 3-month EURCHF target at 1.06 and our 12-month target at 1.08 We thus see a potential for euro appreciation.

The JPY depreciated by almost 2% in December, due to the Bank of Japan’s ultra loose monetary policy that contrasts with the FED increasingly restrictive policy.

As long as the 2% inflation target is not reached, the Bank of Japan will keep rates at their current levels or lower. On a year-on-year basis, inflation reached 0.5%. It could accelerate in the short-term due to energy prices. At its December meeting, the Bank of Japan announced the end of emergency measures concerning the purchase of corporate bonds at the end of March 2022. It will however continue to provide support to smaller companies until next September.

The December Composite PMI reached 51.8 against 53.3 in November suggesting a weaker outlook. Companies cited slower growth in order books, supplier shortages, and the uncertainty of the pandemic. The reassuring points are the strong demand and the job creation. The finance minister Shunichi Suzuki recalled that the Yen needed stability and that the current low level threatened the cost of imports.

The JPY could rebound in 2022, with uncertainty and volatility decreasing only gradually. In addition, the normalization of the global trade should benefit Japanese exports.

We keep our 3-month and 12-month USDJPY targets at 111 (value of one dollar). This suggests some appreciation of the JPY from current levels.

Limited potential for the SEK

The SEK depreciated slightly in December as the central bank (Riksbank) is now expected to remain dovish for a while. The Swedish currency is thus one of the worst performing G10 currencies in 2021.

The inflation figure for November was 3.6% on a  year-on-year basis, the highest level in 28 years. It was mainly driven by electricity and fuel prices. The government reintroduced mobility restriction measures and extended the support to companies.

On November 24th, the central bank announced that they will probably leave the policy rate unchanged in 2022. Indeed, the unemployment rate is still above 8% and the fiscal policy could be needed to relaunch the economy. Policymakers have also announced that they may modestly reduce the size of the balance sheet starting in 2023. However, inflation is expected to be higher than the target in 2022 and it could push the Riksbank to be a bit less accommodating. The Riksbank and ECB should tighten at about the same time. In that context, we do not expect a rise in the rate differential with the euro and the EURSEK should remain close to 10.

We keep our EURSEK targets at 10.00 over the next 3 and 12 months (value of one euro). This suggests a marginal appreciation for the SEK.

Continued strengthening over the long-term

In December, the NOK appreciated by more than 3.5% mainly due to a 0.25% increase in the target rate.

The inflation rate reached 5.1% in November year-over-year. Inflation in electricity prices, imported goods and wages are expected to remain high in the coming months. The country has returned to full employment with less than 2.5% people unemployed, another condition for a restrictive policy. A third rate hike is expected in March and two others in 2022.

The December Manufacturing business survey (PMI) remained high at 58, a strong decrease from the 63.7 level of November. It reflects delays in the production and distribution of goods but it suggests in expansion thanks to strong demand. In Q4, trade surplus set a new record driven by gas prices.

The medium-term policy rate forecast of the Norges is 1.75% and it should be reached in the next few years according to the bank. We forecast that the rate differential with the ECB will result in an appreciation of  the Norwegian Krone.

We maintain our 3-month EURNOK target (value of one euro) at 9.75 and our 12-month target at 9.60. This suggests an appreciation of the NOK.

Limited upside for the AUD

The Australian dollar appreciated in December as the Omicron variant had  a smaller than expected negative effect on the economy. The Australian currency has seen a lot of volatility recently. It broke a key support at 0.7 recently before recovering and moving closer to our target of 0.72 (value of one euro).

The Reserve Bank of Australia should continue to purchase bonds until at least mid-2022. It recalled its willingness to purse highly supportive monetary policy as inflation is lower than in other countries, with a 12-month rate of only 2.1% in December, and with its objective to achieve full employment. No rate hikes are expected before 2024.

Monetary and fiscal support announced in China should support Australia’s exports. Demand from Asia for coal, iron core should remain strong in the coming months. The expected normalization of world trade could be a further support.

Therefore, we maintain our 3-month and 12-month AUDUSD targets at 0.73 (value of one AUD). This implies a limited appreciation potential for the AUD over the coming year.

The Kiwi appreciated in December with fears related to Omicron diminishing. The number of Omicron cases remains very limited in New Zealand.

The central bank has started its hiking cycle and the NZD should perform well over the coming year. The  high interest rate differential will give it an advantage compared to other G10 currencies. At the last meeting in November, the central bank lifted rates by 25bps, seeing sufficient strength in the economy. The official cash rate is now at 0.75% and should rise to 2% by next year and 2.5% by 2023.

With less than 3.5% unemployment, the labor market is tight. Rising house prices are also a concern. It reached 15% in 2020 and more than 25% in 2021, making property inaccessible for part of the population. These two factors argue for further rate hikes. The NZD should also benefit from better monetary conditions in China and the normalization of global trade.

We keep our 3-month and 12-month NZDUSD targets to 0.70 (value of one NZD). This implies a moderate appreciation potential for the NZD.

Small upside for the CAD

The CAD appreciated in late December. The USDCAD has been quite volatile throughout the end of 2021 due to uncertainties related to the pandemic and central bank meetings.

The Bank of Canada maintained its policy rate in December as was expected by investors. Moreover, the tone was quite dovish and Bank of Canada should remain accommodative until the  GDP recovers from Q4 2019. The Central Bank expects the inflation rate close to 2% in second half of 2022. We expect a first interest  rate hike in March or April. There is less need for monetary support given the tight labor market. We expect two more increases in 2022. Economic growth was strong in the third quarter reaching 5.5% thanks to consumption and services.

Despite uncertainties in the coming months, demand for oil (WTI) is expected to remain strong and this will be another factor supporting the currency. With monetary policy expected to be more restrictive in both the USA and Canada, we do not expect a significant rise in the interest rate differential. We expect three rates hike of 25bps in 2022 from the Bank of Canada.

We maintain our USDCAD (value of one dollar) target for the 3-month and 12-month horizon at 1.25. This suggests a  small upside for the CAD over the next year.

The USDCNY was more volatile than usual breaking temporarily the 6.35 level, a level not seen since early 2018.

The year 2021 has been marked by increasing regulations on a few sectors contributing to a real estate crisis and high energy inflation. More monetary and fiscal support is expected in 2022 as measures already announced. We look for simplified financing conditions for small and medium-sized enterprises and more subsidies for R&D. The Communist Party of China suggested that the stability and inclusion of all economic players is a key objective.

Over the first 9 months of 2021, exports were strong. This remains a key pillar of Chinese growth.

We maintain our 3- and 12-month targets for USDCNY at 6.50. This suggests a slight weakening for the CNY over the next year.