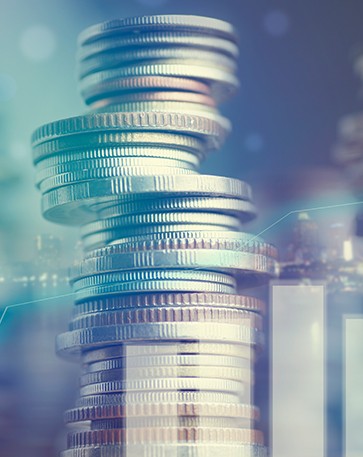 Central banks around the world are in difficult positions. Inflation is high single digit in most of the countries in our coverage while business surveys (PMIs) indicate a slowdown in new orders and activity in the global economy. Fiscal and monetary policies must therefore manage the slowdown and the sharp rise in prices. Labor markets continue to perform well in most countries,  reinforcing the risks of an inflationary spiral, especially in the US.

The euro has dropped below 1.05 again since the US inflation figures of May. The ECB confirmed its willingness to gradually exit negative rates with a first rate hike in July. The ECB will also stop its net bond purchases.

We are more skeptical about the 12-month outlook for the British currency given the risk of recession in the UK. We change our 12-month target from 0.82 to 0.84. It is now aligned with our 3-month target.

In China, lockdowns have affected the economy and exports. The yuan depreciated slightly in May. We remain prudent on the yuan in the short-term. Australian and New Zealand economies depend on imports from China and their currencies were also affected negatively. Commodity currencies start to look attractive against the dollar.

Oil-related currencies such as the NOK and CAD have the potential to appreciate in the current environment. Indeed, the central banks in these countries are among the most inclined to hike rates.

More upside for the EUR

The euro fell back below 1.05 following US inflation figures on June 10th. Price inflation in the US reached 8.6% in May at an annual rate, and investors are now expecting more aggressive rate hikes in upcoming meetings. We expect inflation to be close to peaking in the US while it will probably take September before we see this in the eurozone. This suggests that the Fed could be slowing the pace of rate hikes by autumn while the ECB will be pushed to hike already in July. We forecast less rate hikes in the US compared to market expectations. This should lead to a reduction in the yield spread between the US and the eurozone countries.

We expect a more positive environment for economic growth over the second half of this year as uncertainties regarding inflation and global supply chains recede. Government expenditures will also be a key support, especially in Europe.

The british currency depreciates further of the past month. The market now expects fewer rate hikes than the Bank of England suggested.

In May, inflation reached 9% year-on-year. Unemployment is only at 3.8% due to a shortage of workers. This creates second-round inflation effects that reinforce the income squeeze for households. The government has announced a 15 billion support plan to deal with the rising cost of living. UK companies are experiencing squeezed margins and weaker order books. The May Composite PMI continues to suggest expansion with the latest index value at 51.8 but has fallen sharply (58.2 in April).

Compared to other G7 countries, the British economy is expected to underperform. The Bank of England should raise rates by 25bp at its next meeting in mid June. We could see less rates compared to previous expectations.

In this context, we no longer expect the GBP to appreciate from current levels. We change our 12-month target from 0.82 to 0.84. It is now aligned with our 3-month target. Compared to current levels this suggests a slight appreciation of the GBP.

Looking for a weaker CHF

The Swiss franc has remained quite stable over the last 30 days at around 1.03. We remain cautious on the CHF over the coming year as the Swiss National Bank remains probably the most accommodative central bank in the world with a prime lending rate at -0.75%. Inflation is much lower in Switzerland compared to G7 countries, reaching 2.9% in May on an annual basis. At some point, it could push pressure on the SNB to increase rates but far less than for the ECB. A first rate hike of 25bps could occur at the end of September.

Swiss growth is robust at 4.5% and GDP is now 2.4% above its pre-covid level. The Manufacturing and Services PMI, while declining in May, remain at high levels with 62.5 and 56.2, respectively.

In the short term, the franc should continue to move close to its 50-day moving average at 1.03 due to the global uncertainties.

The Yen was quite stable around 130. The yen is still down more than 10% compared to the end of February and close to multi-year lows.

The weakness is clearly related to the relative rate hike expectations. For the Bank of Japan, no rate increase is expected in 2022 and the first one may not occur until late 2023. Inflation remains fairly low at 1.9% but is expected to approach or even exceed the Bank of Japan's target of 2%. Indeed, the weak Yen is a source of imported energy inflation. This should not lead the Bank of Japan to raise rates as it will only hike if inflation is structurally above that threshold. Japan is also affected by the lockdowns in China and the war in Ukraine. We expect some gradual improvement over the coming months.

There are strong arguments that point to an improvement for the Yen. The currency is structurally undervalued, and the country's current remains positive. The Fed should slow the pace of rate hikes by autumn.

We therefore maintain our targets of 124 and 120 for the 3- and 12-month horizon. We thus expect a gradual appreciation of the Yen over the coming months.

Most good news are priced

The SEK depreciated by 1.3% over the month of May. The decision by the Riksbank to hike rates by 25bps at its April meeting marked a significant shift in its monetary policy after a sharp acceleration in inflation.

The Riksbank stopped buying Swedish government treasuries following its last meeting and announced the reduction of its balance sheet by SEK 37 billion in the second half of the year. Inflation rose to 6.4% in April from 6.1% in March. The manufacturing PMI accelerated slightly in May from 54.9 to 55.2. The Swedish industry continues to perform well although international uncertainties present a downside risk to manufacturing activity in the near future.

The market is already pricing in 9 rate hikes of 25bps by the end of 2024. Thus, there is little appreciation potential for the SEK at this stage.

We therefore maintain our targets of 10.4 and 10.7  for the 3- and 12-month horizon. This implies a slight depreciation of the SEK the coming year.

The Norwegian currency depreciated by more than 2.5% over the past month. This is due to a moderation of rate hike expectations by the market.

At its May meeting, the Norwegian Bank kept its key rate unchanged at 0.75%. The labor market continues to be tight, and unemployment is below expectations. Domestic prices have recently risen at a slower pace than expected, but future wage growth and imported inflation should drive price up more in the future. The Norges Bank could now raise rates by 25bp at the end of June.

In view of the good economic figures, Norway could implement a more restrictive monetary policy than the ECB and this will be an additional support factor for the Norwegian krone.

High petroleum gas and crude oil prices, which account for 29% and 26% of exports, respectively, should allow the NOK to appreciate over the one-year horizon.

We maintain our 3- and 12-month targets at 9.6 suggesting a potential for NOK appreciation from current levels.

Looking for a rebound

After falling more than 5% in April, the Australian dollar appreciated around 1.5% in May. Global uncertainties and particularly around China were a key drag.

Australian exporters point to logistical difficulties related to the war in Ukraine as well as sanitary restrictions in China. At its June meeting, the Reserve Bank of Australia announced a 50bps hike, higher than the market expected, and is forecasting further tightening in the second half of the year. The cash rate, currently at 0.85%, is expected to rise to 2% over the next year. Inflation is currently at 5.1% annualized and should continue to rise in the coming weeks.

Australian GDP surprised on the upside in the first quarter reaching 0.8% growth quarterly against 0.5% expected. The labor market is also strong with unemployment at only 3.9%. The household and business balance sheet are also in good shape.

We maintain our 3-month AUDUSD target at 0.73 (value of one AUD) and we keep our 12-month target to 0.76. This implies an appreciation potential for the AUD over the coming year.

The NZD has appreciated by 0.8% over the past 30 days. Over the last month, New Zealand's trade has also been hurt by the slowdown in China and this explains the weakness of the kiwi from its annual highs reached at the end of March.

Rate hike expectations are high with an expected terminal rate close to 4%.  A further 50bp increase is expected at the July meeting. Inflation at 6.9% remains well above its sustainable level while the labor market remains very tight. Domestic demand remains very strong. Wage growth is below inflation and could lead to second-round effects. The Reserve Bank of New Zealand (RBNZ) is also concerned about halting the high house price inflation that the country has experienced since the Covid.

The manufacturing business survey index (PMI) continues to suggest expansion with a level at 55.3. Food prices tend to rise after the increase in energy prices and this is another supporting factor for the currency. The labor market remains extremely tight in New Zealand. Many companies point to the difficulty of recruiting.

We keep our 3-month and 12-month NZDUSD targets to 0.70 (value of one NZD). This implies a lateral movement of the NZD over the coming year.

The Canadian dollar is down over 1.6% this month.

The Bank of Canada raised rates by 50bps at its June meeting as largely expected. With inflation on the rise, the central bank may act more decisively at future meetings. Although a 75bps hike is unlikely at this point, there should be another 50bps hike at the July meeting and 25bps in September. There could then be a pause in the rate hike cycle depending on the inflation data. This would bring the overnight rate to 2.25%.

Rate hike expectations between Canada and the USA are quite similar and we think that the recent CAD weakness is not justified.

We maintain our targets at 1.25 at 3 and 12 months. This suggest a stronger CAD.