Risk sentiment should be more supportive

Market sentiment has been hit in November as the trade newsflow sent a mixed message. However, the comeback of risk appetite should drive most currencies up against the US dollar over the foreseeable future. Risks seem more balanced as European political risks fell, global growth is expected to stabilize and a US-China trade ceasefire remains our central scenario. On the monetary side, a pause of the easing cycle has been broadly observed.

The euro retraced more than half of losses seen in November and temporarily broke above 1.11. The Economic Surprise differential supports the idea that the euro block could have bottomed out. Moreover, political risks surrounding the Brexit remain capped low. On the trade side, Trump sent mixed signals. We however still believe in a likely ceasefire over the upcoming period. Hence, we continue to see an upside potential for the euro short term as we believe in an improvement on the trade side and a stabilization of the European momentum. We keep our target at 1.12 in a 3-month horizon. Medium term, the main drivers are still oriented in favour of an appreciation of the euro. Indeed, the 2-year yield spread narrowed and we expect this trend to continue. In addition, the overvaluation of the US dollar compared to its fair value (purchase power parity) level makes it more vulnerable. In this context, we maintain the EURUSD target around 1.14 over the next 12 months.

The British pound fell below 0.85 in December as investors bet on a large victory of the Conservative party. Johnson promised an orderly departure from the EU in case of victory. This would be positive for markets. We maintain our probability of 55% for a deal, 35% for a revocation of the A50 and 10% of probability for a no-deal. However, we cannot rule out the risk of another hung parliament leaving the UK in much the same position as now and possibly requiring a further extension of the Article 50. In case of successful deal, uncertainty may linger as negotiations on future trade relationship between the UK and the EU could run longer than expected in case extension of the transition period beyond December 31 2020 . In this context, we remain cautious as too much optimism seems to be priced. We keep our EURGBP targets at 0.88 over the next 3 and 12 months.

Recent Australian economic figures highlighted a mixed picture. The manufacturing PMI fell below 50 in October. Indeed, despite an improvement of the risk sentiment, the lack of impetus of the Chinese economy keeps undermining the Australian economy. Although the central bank unexpectedly kept interest rates on hold arguing that the easing monetary stance is beginning to bear fruits, Chinese demand will remain subdued, in particular over the first part of 2020, weighing on the AUD. We thus revise down our 3-month target to 0.68 (value for 1 USD).

Medium term, the central bank expects the domestic growth to pick up by 2021. The environment of easing financial conditions and higher public spending fueled forecasts of a domestic recovery over the next two years. However, external headwinds will continue to curb the AUD appreciation potential. Hence, we keep our expectations of a slight strengthening of the AUD over the next 12 months (0.70).

The New Zealand dollar kept recovering on the back of a broad decline of risk aversion so far. On the domestic side, the central bank sent a positive message by surprisingly keeping rates on hold. It noticed expecting positive developments for the domestic economy supported by the ongoing monetary easing and a likely stronger fiscal stimulus. While the labor market remains tight and employment is close to record high levels, low interest rates are expected to drive inflation towards the central bank target over the next two years. We however see the NZD positive trend capped by the slowdown of the Chinese economy which should trough over the first semester of 2020. We hence think the NZDUSD will trade around current levels, 0.65 over the next 3 months. Medium term, the brighter economic outlook combined to an expected weakness of the USD should drive the upside of the NZD. Nevertheless, the appreciation should be contained by lingering trade uncertainty and the lack of yield compared to US bonds. We keep our 12-month target at 0.66.

In November, the Canadian dollar retraced gains of the previous month, driven by the central bank’s dovish comments. Since then, the governor moved to a more positive outlook and kept interest rates on hold. Consumption and housing activity should continue to be well oriented supported by high wage growth and low rates while the manufacturing sector sentiment keeps recovering. The main downside risks are related to global uncertainty. As we do not expect an escalation of tensions and global growth should stabilize in 2020, we maintain our view of a strengthening of the CAD. We keep our 3-month target at 1.30 (value of 1 dollar). As we expect the Fed to lower the target rate next year, the monetary policy divergence should persist. The yield differential should keep widening as the CAD would keep a small premium compared to the US rates. As the top attractive G10 yielder, we believe in the upside potential of the CAD. We maintain our 12-month target at 1.28 (value of 1 dollar). 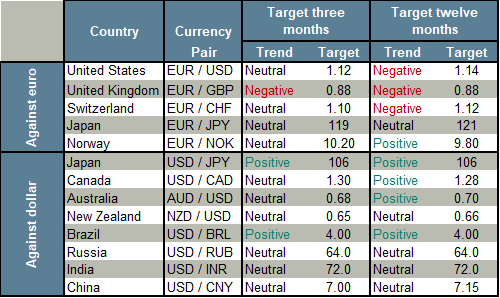