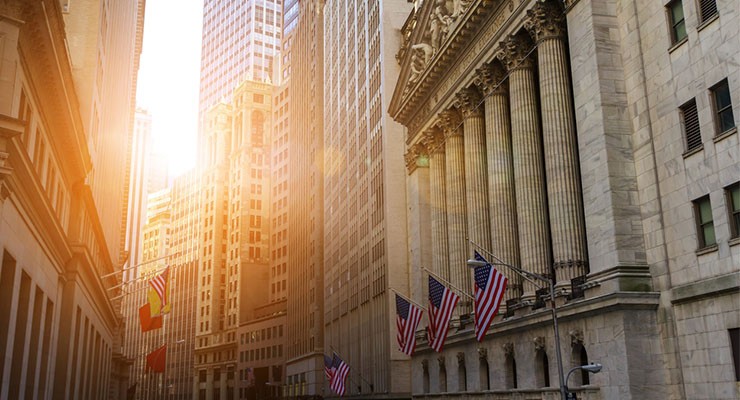 The Fed hiked rates by 25 basis points (bps) yesterday, to 0.50% as inflation is soaring. It raised its inflation forecast for this year and the next two years. It also revised down its growth forecast, but only for this year. All this was expected.

The surprise came from the Fed’s projections for rate hikes. It changed its forecasts substantially from the December projections. The Fed now expects a steeper and shorter rate hike cycle with 6 additional rate hikes this year, i.e. one at each meeting. It expects the policy rate to peak at 2.75% as early as 2023 and to be maintained over 2024. That level is higher than the expected long-term rate (2.38%), suggesting that the Fed has moved from wanting to remove excess liquidity in the system to actually tightening financial conditions. The Fed is convinced that the economy can take it. It seems that the Fed is now focusing solely on fighting inflation, ignoring the labour market, at the risk of causing a recession.

In the US, past recessions have usually been preceded by an inversion of the yield curve (long-term rates becoming lower than short-term rates). This inversion triggered a recession 12 to 16 months later. Currently, the differential between the 10-year rate and the 3-month rate, which is the yield curve used by the Fed in its recession model, is 175bps, indicating a very low risk of recession in one year (5%). The market focuses more on the difference between the 10-year rate and the 2-year rate. It is currently 22bps, which suggests a non-negligible risk of recession in one year (25%), as in the past recessions have occurred on average when this probability was above 30%.

Change in our scenario

We have revised our scenario given the hawkish Fed, its determination to return to price stability and its willingness to tighten monetary policy faster and harder than originally expected. We now expect the Fed to raise rates 5 more times this year instead of 3. We maintain our assumption of 4 rate hikes next year. It means that we are raising our 12-month target for the US 2-year rate from 1.5% to 2%. As the 2-year rate is currently very close to this target, we have a positive stance on US short-term government bonds, especially in light of current geopolitical events as these assets are considered as safe havens as they are safe and liquid.

Our 12-month targets for long-term rates are 2.25% for the US 10-year rate and 0.50% for its German peer. We see rates rising moderately as monetary policy normalisation takes place.

For the ECB, inflation is also a concern. At the March meeting it revised its inflation forecast sharply upwards for 2022 and slightly upwards for 2023 and 2024. The medium-term inflation forecast is very close to the 2% target. The ECB is in an uncomfortable position, with current inflation well above its 2% target on the one hand, and growth weakened by geopolitical uncertainty and the consequences of sanctions against Russia on the other. Faced with this dilemma, the ECB has chosen to prioritise the fight against inflation. The normalisation of monetary policy is therefore underway. The ECB will stop the net purchases of the pandemic asset purchase programme PEPP in March, accelerate the taper of the APP programme and, in principle, stop the net purchases of the APP in Q3 and raise its policy rates some time afterwards. We expect the first rate hike to come in December given that it is only towards the end of the year that we should see inflation translate into wage increases.