2018 Mid Year Investment Outlook
YOUR WEALTH
HAS A VOICE.
LET IT BE HEARD.

There is an aging bull market in the U.S. equities, ongoing geopolitical risks, potential for trade wars and pressure on some of the Emerging Markets currencies. Furthermore, oil remains a wildcard. What should investors do for the second half of 2018?

At the beginning of 2018, we mentioned that market volatility was too low across asset classes, and interest rates could increase further after the “Goldilocks”* environment in 2017. Hence, we started the year with a short-term neutral on equities, which we opportunistically reverted to a moderate equity overweight after the February sell-off in equities.

In addition, we felt the USD was too weak at the start of the year and expected a USD snap back which has now occurred, and was definitely not consensus at the time. We believe the USD will weaken moderately in the second half of the year, in particular, after trade tensions ebb.

Finally, we were underweight fixed income expecting higher interest rates.  As expected, the bond market had a moderate correction and the Federal Reserve delivered two rate hikes, with two more expected for this year. We maintain a fixed-income underweight view. However, there are pockets of opportunities opening up in selected Asia bonds and Emerging Market bonds.

Could the risks be better balanced now in markets with still solid global economic growth? Where are the opportunities to embrace as well as what to avoid for the second half of 2018? 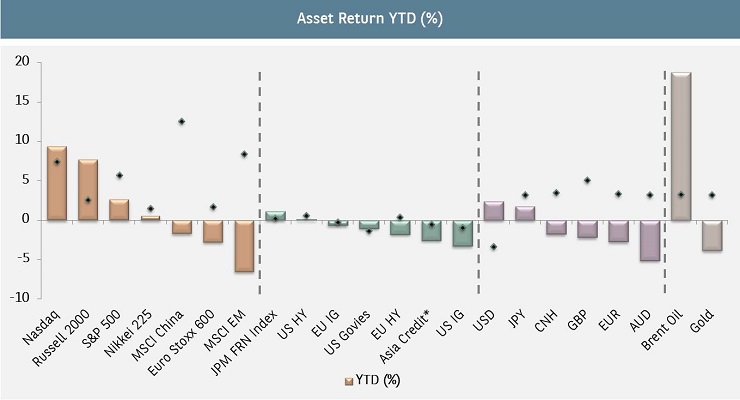 Dots in the chart represent asset performance through end January 2018 whereas the asset return YTD is as of 30 June 2018. Source: BNP Paribas Wealth Management; Bloomberg, 30 June 2018; The JP Morgan JACI Composite Index is used for calculating return on Asia Credit

After a strong start in 2018, asset markets have become more volatile as investors concern about risks of a full-blown trade war, an aging US economic cycle, geopolitical events and pressure on some of the Emerging Markets currencies amid USD strengthening.

Rising protectionism is the number one risk factor for global growth. Economies such as Europe and Asia, which are more open, could suffer more than the US from a full-blown trade war as world trade could see significant decline.

We are hopeful that a major conflict can still be avoided, though the risks have risen. Importantly, the economic data has not weakened thus far, as global economic growth remains resilient and forecasted to be greater than 3%, a positive surprise in terms of trade deals could boost the confidence of businesses and drive up investments. 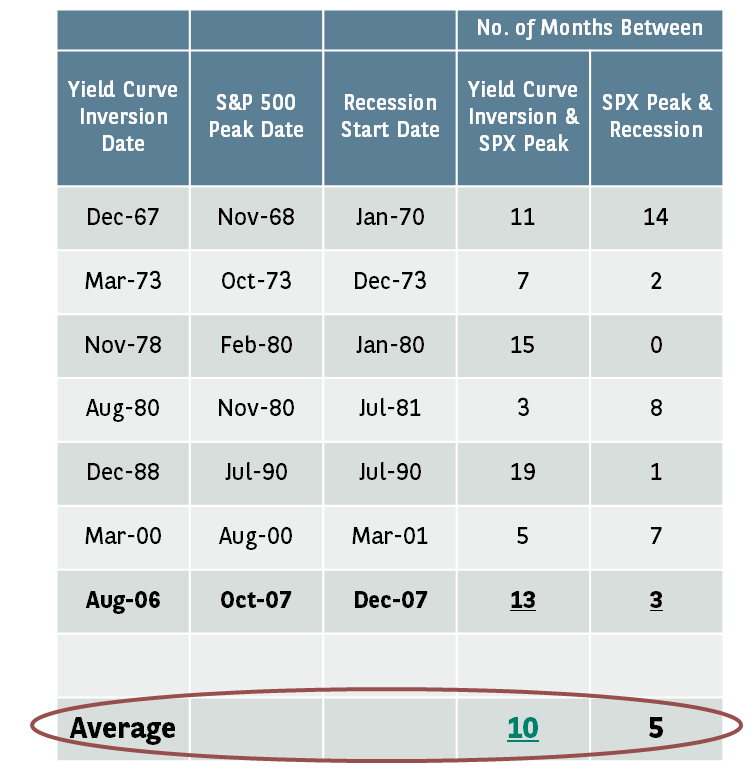 CHART 2: US Yield Curve Inversion vs S&P 500 Peak vs US Recession

Italy’s political tensions have eased after a new government has been formed by two Italian populist parties. However, they maintain their will to implement an expansionist fiscal policy when Italy’s net debt is already very high and the country is still in budget deficit.

There is a risk of sovereign rating downgrade by credit rating agencies. Crucially, our base case scenario is that market tensions over Italy will persist but not result in any euro crisis. The new Italian government has reaffirmed its commitment to the common currency.

The increased volatility has created an opportunity in European equities given its attractive valuation and dividend yield.

The USD appreciation in recent months is a clear factor behind pressure on EM currencies, in particular on those countries with twin deficits (current account deficit and budget deficit) and high external debt. However, in aggregate, EM countries have better financial positions than during the “taper tantrum”**.

We still expect a renewed modest USD weakening in coming quarters amid the USD overvaluation and structural weaknesses (rising debt and negative current account) exacerbated by the US tax cuts, which should provide support to EM currencies again.

We see current market pressures as a story of differentiation rather than a more systemic crisis.

Valuations of Value Stocks can be attractive, as their relative performance hit the lows during the Internet Bubble in 1999/2000 (chart 3). Firstly, Energy Stocks remain a good hedge against rising uncertainties, as the sector benefits from high and secure dividend yield, solid free cash flow and attractive valuations. Oil prices should remain elevated which will drive increase in rig count. Our forecast remains at USD 65-75 per barrel for the rest of the year. Secondly, Financial Stocks look set to benefit from rising inflation expectations and thus higher interest rates. This in turn will bring higher net interest margins and more solid credit growth and thus higher earnings for banks. Finally, we expect market performance to broaden in the second half of the year. 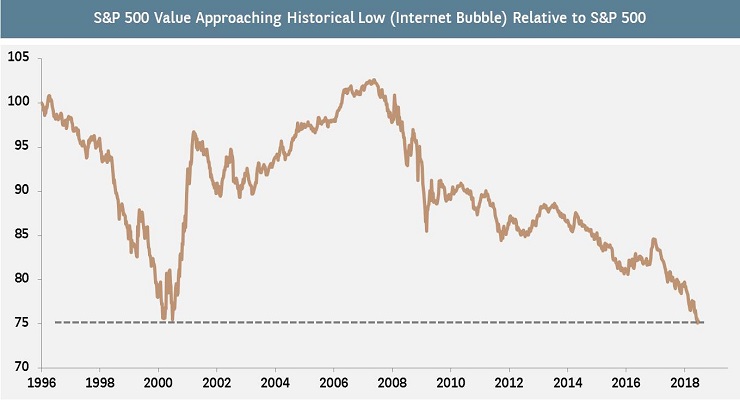 ADD DOMESTIC EQUITIES IN THE US & ASIA

Given concerns over escalation of trade tensions, US companies, which are more domestic focused, have outperformed since early March this year, thanks to tax reform and strong domestic growth.

Similar to Asia, the regional stocks with US exposure underperformed the broad Asian Index in recent months. Diversification can be achieved by adding these exposures for investors who own global names in their portfolios.

Alternative strategies tend to have lower correlation with the markets. Historical data also suggests that they can give better risk-adjusted returns against traditional assets. This is especially important as we are in the late stages of the economic cycle.

We keep a preference for Global Macro, Long-Short Equity and Event Driven strategies.

The weakness in gold due to a stronger USD is creating a tactical opportunity. We like gold as a diversifier against inflation and geo-political risks. Historically, gold price tends to move up in line with the rising US budget deficit. For the coming 6 to 12 months, we expect the price of gold to move towards the upper end of the USD 1200-1500 range.

China currently accounts for 15% of global GDP. However, the country remains under-represented in the global equity (4%) and bond (below 1%) benchmarks*. With Beijing’s internationalization policy to open up its financial markets, and further onshore equity and bond inclusions into global indices, flows into China are expected to increase significantly over time. Volatility in the China equity market in the near term creates good entry points for the long term. 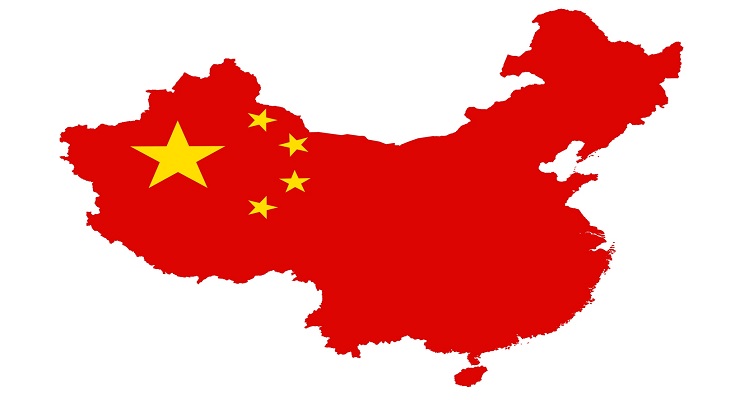 Despite our short-term cautious view on credit markets, we are starting to see value in bonds, which is the most important parameter for long-term investors with a hold-to-maturity view. Bond prices have come down a lot over the past one to one and a half year.

In addition, Emerging Markets Local Currency Bonds was under pressure in recent months, as the market focused on vulnerabilities of those EM countries with a large current account and fiscal deficit. However, Emerging Markets fundamentals in general are in better shape today than before in the form of lower external financing needs, larger foreign reserves and relatively tame inflation in most places.

Both nominal yields and inflation-adjusted yields are getting more attractive in terms of carry. The trade tension is a headwind in the short term but this also creates good buying opportunities for longer term investors.

*Goldilocks economy: an economy that is not too hot or too cold **Taper tantrum: the surge in US yields in 2013 in reaction to the Fed’s comments that it might taper the rate of bond purchases in its quantitative easing program.