HOW DOES ASIA PACIFIC EQUITIES REACT IN TIMES OF RATE RISES?

Once upon a time in a land far, far away there was a strange phenomena called interest rates, and that bizarrely, they could rise over time and not just fall.

Once upon a time in a land far, far away there was a strange phenomena called interest rates, and that bizarrely, they could rise over time and not just fall.

It feels like a very different world now, post the Great Financial Crisis, where we have had only one rate rise in the past ten months, as the Federal Reserve struggles to raise rates a second time. For example, in the last “normal” interest rate cycle from 2003 to 2007 the Federal Funds Rate moved from 1% to 5.25% with 17 separate interest rate rises!  I still remember perhaps too fondly, the old days of Chairman Greenspan when rate expectations were not telegraphed to the market as the FOMC raised rates surprisingly in February 1994, and eventually from that time a record low of 3% to 6% leading to sharp sell-off in the 10-year Treasuries from less than 6% in late 1993 to 8% twelve months later.

Will history repeat again with investors addicted to super low rates and when they rise the impact will result in unexpected losses?

This could be the case in government bonds where we remain underweight. Recently, there has been a sell-off in developed country bond yields despite interestingly, no change in Fed rate rise expectations. This is a direct result of the ECB and BOJ not acting to further ease at their recent meetings. Hence, it illustrates how the super low rate environment was due for some normalization.  For a holder of a US 10- year government bond, the capital loss would be circa 3% on the recent sell-off in yields in the last few weeks. Hardly risk free return! Short-term yields are getting near our 3-month targets after the sell-off. 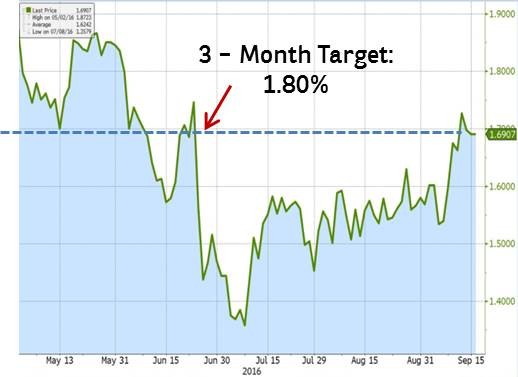 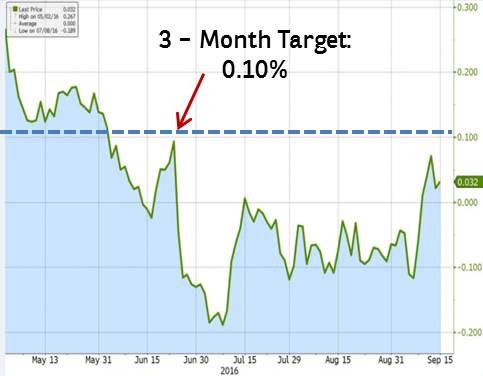 Firstly, when looking at prior cycles, generally equities correct into the first rate rise then rally afterwards. It is logical early in the interest rate cycle that rate rises are a sign of economic growth and still moderate levels of inflation. The normal playbook is later in the cycle and after many rate rises to quell inflation, tips the economy into recession and a bear market in equities starts to discount this well in advance. However, this rate cycle is very different and the debate over the neutral rate and what level it is, was a topic, recently at Jackson Hole. However, no one knows precisely the neutral rate presently, and we are awash in negative rates, low inflation, and moderate growth.  In short, a very different economic cycle.

What are the implications of Asia-Pacific equities of rate rises?. Is history at all a good guide or even relevant? In both, 1994 and 2004, rates were hiked and markets bottomed as well around one month after the first hike which also coincided with the second rate hike and subsequently MSCI Asia ex. Japan rallied by +19.9% and +28.5% respectively. What about this cycle? Similarly, MSCI Asia ex. Japan, bottomed in January 2016, one month after the December 2015 rate hike as well, thereafter rallying +27.2%. Hence, history has been a good guide with regards to the performance into and shortly after the first hike, even for this cycle. Of course, one important difference there has been no second rate hike. We have been overweight Asia Pacific equities the entire year.

Hence, we could see some moderate correction in Asia Pacific equities in advance of a second rate hike as we saw recently ahead of the September Federal Reserve Meeting. But we believe that would be a buying opportunity as we are overweight Asia ex. Japan equities.   Why? (1) GDP growth is bottoming relative to Developed economies, this drives relative EPS finally back in Asia’s favour after many years of decline. (2) US rates are expected to be raised gradually, hence, not destabilizing for Asian equities. (3) Valuations are attractive after a four year bear market at 13x earnings. (4) Asia Pacific equities have lagged the EM counterparts partly due to underperformance of Chinese and Hong Kong equities.

However, the underperformance of Chinese and Hong Kong equities is changing. China has a number of catalysts, (1) SDR inclusion this quarter. (2) Earnings momentum is bottoming and the latest earnings season beat expectations (3) Old economy industrial profits are positive at +11%, and PPI is about to turn positive ending years of deflation. (4) Shenzhen – Hong Kong connect is likely to be introduced in November.