Why is the renminbi weakening? Is this the new normal? Should we be worried?
YOUR WEALTH
HAS A VOICE.
LET IT BE HEARD.

Why is the Renminbi weakening? Is this the new “Normal”? Should we be worried?

Earlier this year, many in the market feared a large, one-off devaluation of the RMB. Instead, the PBOC has improved its communication strategy and the direction of the currency has been gradually influenced more by market forces: China’s current and capital accounts. This fits squarely into the Chinese government’s key long-term policy objectives of forex and capital account liberalization. Hence, the markets have gotten more used to a fluctuating RMB as opposed to a managed one-way direction. In this regard, they are also getting the market used to viewing fluctuations of the RMB against its trade-weighted basket, rather than purely versus the dollar.

To understand the RMB weakness, one needs to be aware there has been broad dollar strength against most currencies since May. Hence, it is important to note that the CNH currency is moving in lockstep with dollar strength, in general, i.e. the dollar's appreciation against a trade-weighted basket of currencies (DXY index). This is a direct result of rising Federal Reserve rate expectations for December and higher Treasury yields.

Chart 1 below illustrates this point, the DXY index against all currencies (Blue line) alongside a chart of CNH (Red line). 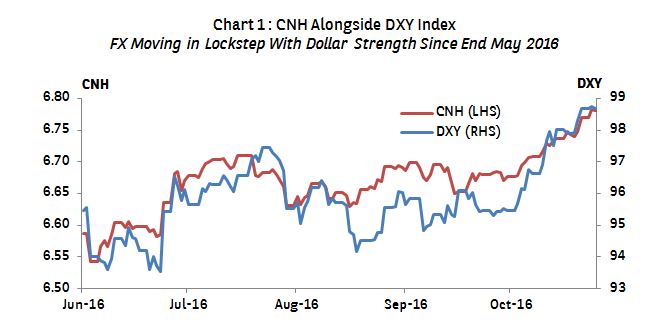 However, against RMB's trade-weighted basket, the Chinese currency is not depreciating overall as it has been range bound since this July. For example, the RMB has been appreciating against the Euro and Yen over the past few months.

This is illustrated in Chart 2 below depicting the trade-weighted basket of Chinese currency (CFETS RMB Index) which has been consolidating in the past three months.

Chart 2 : Trade-Weighted Basket Of Chinese Currency (CFETS RMB Index)
CNY Versus a Basket of 13 Currencies Based on International Trade

What about increasing capital outflows?

Capital outflows were a legitimate fear earlier this year to pick up more moderately to a six-month high only recently. Overall, China’s balance of payments have narrowed over the past few years as the services sector deficit has grown. This is due to the broader rebalancing in the economy towards services, consumption of service imports, and growing tourism. Another structural shift is in net foreign direct investment in China relative to overseas direct investment from China to the rest of the world, which dropped from 4.8% of GDP in 2006 to 2.3% of GDP at end of 2015. With the government's encouragement including the One Belt One Road initiative, foreign takeovers, and the excess capacity in sections of the domestic economy, capital outflow figures are likely to continue to be volatile.

Presently, there are no signs of stress as illustrated by the stable onshore vs. onshore currency spread. 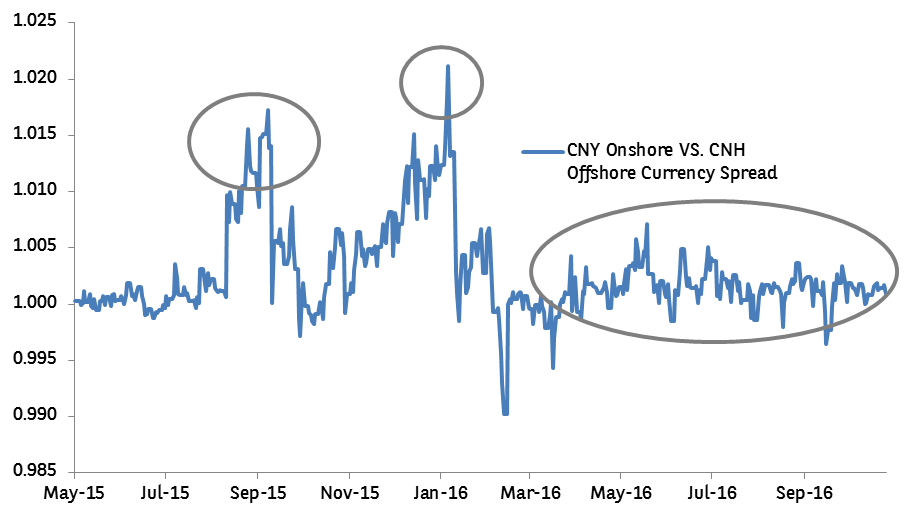 Our target for RMB is 6.8 presently.

As CNH approaches our 12-month target of 6.8, it is important to note the dollar has had a move against all currencies on the back of expectations of a December Federal Reserve rate rise which has been our base case. Many short-term currency pairs are approaching our targets given the dollar move as that expectation was embedded in our FX targets. Hence, the dollar could have a breather and consolidate in the near-term, and further gains will be dependent on the ongoing economic data and upcoming US elections.