With elevated volatility, higher rates and uncertainty on the Fed’s course of action in 2022, investors placed more scrutiny on bank capital structure.

Given the complexity of Basel III rules and the corresponding bank capital structures across jurisdictions, we would like to highlight a few key considerations for investors in the bank capital space:

Capital underpins banking regulations. At the core, banks exist in order to raise money (e.g. by taking deposits) and lend money (e.g. by making loans).  As such, banks have to balance the credit risk from lending money against the returns available by making a spread between the borrowing rate and the lending rate.

At the same time, banks fulfil an important role for savers as a place to safeguard money (instead of lending to a business) – not all lenders to a bank will be willing to take losses should the bank be loss making in its regular activities. This is where bank capital comes into play, where certain lenders to a bank would be first at risk against others with the overall aim of protecting depositors’ money.

Bank stock/common equity is the simplest form and lowest layer in the capital stack. Apart from that, banks fund themselves in the wholesale markets (excluding deposits) broadly by the four categories below (in descending order of risk):

Categories (a)-(c) fall under Total Loss-absorbing Capacity (TLAC) and/or Minimum Requirement for Own Funds and Eligible Liabilities (MREL) in the European Union. While AT1/CoCo can be converted or written down to zero without affecting normal operations of a bank, a holder of bank T2 or senior TLAC takes a risk on bank liquidation/winding up, with recovery (if any) being after senior preferred creditors and depositors. 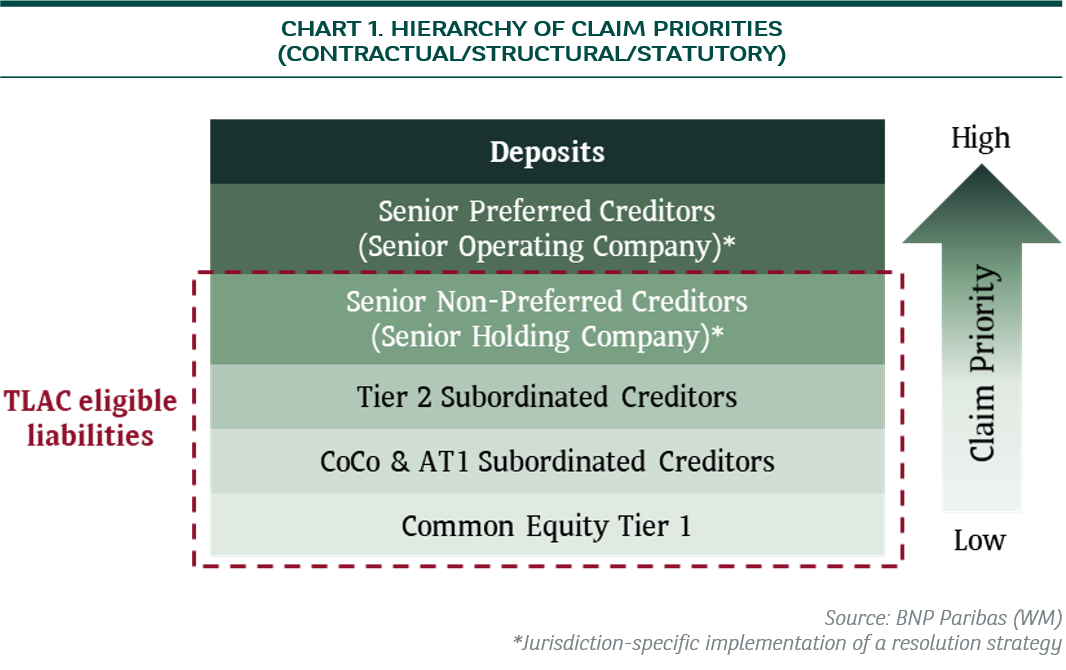 Like all things, bank capital instruments offer varying levels of risk and reward.

Aside from being comfortable with a bank’s credit quality, investors should also be aware of an issue’s structural features such as seniority, coupon reset, extension risks, and coupon cancellation as such factors may come to the fore in a volatile market.

Overall, regulators prefer T2 and AT1/CoCo to have a high degree of permanence in order to maintain the high quality of the capital base. As such, T2 and AT1/CoCo are not allowed to have features such as step-up reset margins that will incentivise banks to redeem them at first call date and/or create an expectation that they will be called.

Theoretically ranked above a bank’s common equity capital, AT1/CoCo does not have any fixed maturity date (i.e., perpetual). They take the first hit if the bank doesn’t have enough common equity capital as determined by the regulator (i.e., at the point of non-viability) and/or common equity Tier 1 ratios falling below a specified threshold.

Such impact includes a partial or full write-down, which may be permanent or temporary.  Depending on the terms of the issuance, they may also be converted into equity, typically at a high strike. Banks typically have the right, but not the obligation to redeem their AT1/CoCo at each call date. We saw such instances with a UK banking group’s USD AT1 Perp that had a coupon reset from 6.409% p.a. to floating rate 3m$L+1.51% in January 2017 and with Banco Santander redeeming its EUR1.5 billion 6.25% Perp AT1 CoCo only in 2020, a year after its first call date.

Banks may also skip coupon payments with no penalty, either at their option or as mandated by regulators. Historically, we have seen banks skip dividends while maintaining AT1/CoCo coupon payments. For example, in April 2020, Rabobank decided to not pay distributions on their deeply subordinated certificates for three quarters following ECB’s announcement asking EU banks to suspend dividend payments at the height of the pandemic. Nonetheless, Rabobank did not cancel payments on their AT1 CoCos during this period.

AT1/CoCo is considered to have the highest beta, being the most volatile and also susceptible to liquidity risk among bank capital. Its performance is often aligned with a bank’s equity movements. As of year-to-date 2022, the Bloomberg European Banks CoCo Tier 1 Index shows a -17.80% total return.

T2 capital instruments rank above AT1s/CoCo and below senior debt. T2 debt may be written off at regulator’s discretion in the event of a bank still remaining non-viable following the loss absorption applied to equity capital and AT1 subordinated debt. Unlike AT1/CoCo, T2 bonds have a maturity date. Meanwhile, T2 bonds do not allow deferral on the coupon payments just like senior bonds.

T2 capital treatment is amortised over the last five years to maturity. While this may be deemed as a motivation to exercise the call to keep funding costs low and/or its capital structure efficient, regulators can choose to reject a bank’s approval request to call the bond for economic/regulatory reasons, for example if raising a new debt would be more expensive than extending the existing T2 paper.

Market confidence can impact a bank’s access to capital / funding. A non-call event on T2 and AT1/CoCo could either be an early sign of trouble, or it could just be a reality check on the economics of the call as a sign of the times. At the moment, the market is pricing in a higher extension risk on AT1/CoCo and T2 with low coupon reset margins amid today’s higher credit spread environment.

Banks further beefed up their capital by including an additional layer of certain senior debt that will be eligible to absorb losses under the authorities’ bail-in resolution regime if a bank’s equity and subordinated debt instruments fail to support its recapitalization.

Some countries chose to build TLAC/MREL buffers through senior non-preferred (SNP) debt, which is contractually subordinated to senior preferred debt. In some cases, senior debt was designated as non-preferred by legislation – German legislators subordinated all bank senior bonds to help German banks meet MREL and TLAC in 2015. This was amended in July 2018 to allow banks to issue senior preferred and SNP bonds. Yet others (e.g. Switzerland and the UK) adopted the approach of having a single bank holding company (i.e., “senior holdco”) as their preferred resolution strategy (see Chart 2), as a holdco debt is structurally subordinated to operating company debt.