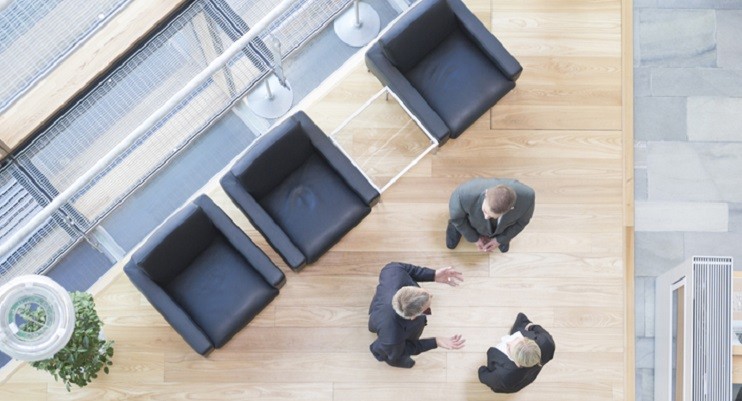 We mentioned in early February that the market looked overbought and complacent that a  correction was long overdue. Hence, the recent correction since mid-February did not come as a surprise to us. Concerns over spike in US yields, tighter China liquidity conditions, tightening in China’s property sector, and the anti-trust rules targeting China’s tech giants all served as triggers of the recent drawdown.

The onshore A-share market, which is largely driven by retail investors, could be even more volatile. This is the major correction for the CSI 300 Index (-15%) since its rebound in March 2020 (+59%). Historical corrections in A-shares tend to take 2-3 months with over 15% drawdowns. We do not expect significant downside from here but the consolidation may take for a while longer with turnover to shrink further in coming weeks. As the domestic stock market is more sentiment-driven, new catalysts are required to boost confidence.

Some areas that worth closely watching are:

(3) Any soothing comments from the PBoC.

China’s economic and earnings fundamentals are expected to continue to improve. There is still a lot of pent up demand to be released going forward, especially in private sector capital spending and household consumption.

The PBoC stressed that there will be no sharp U-turn in monetary policy. In the recent National People’s Congress (NPC), one of the key economic targets is for M2 and credit growth to move in line with nominal GDP growth (our estimate is 11-12%, down slightly from 13% last year) to stabilize the debt to GDP ratio.

China did not embark on super easing during the Covid crisis, and hence, the ongoing policy normalization when the economy is recovering with no inflationary threat at the moment would be gradual, except in a certain areas, such as the property sector where the government worries about bubble (administrative measures have been used rather than macro tightening) and some areas in shadow banking where government would allow some non-profitable SOEs to default on their onshore bonds in an attempt to break moral hazard.

There are also no signs of tightening in China’s monetary conditions. Despite the sharp spike in US yields, China’s government bond yields and interbank rates have stayed steady. The 7-day SHIBOR rate, widely viewed as one of the PBoC’s policy reference benchmarks in its interest-rate corridor operations, has eased considerably after the Lunar New Year holiday. 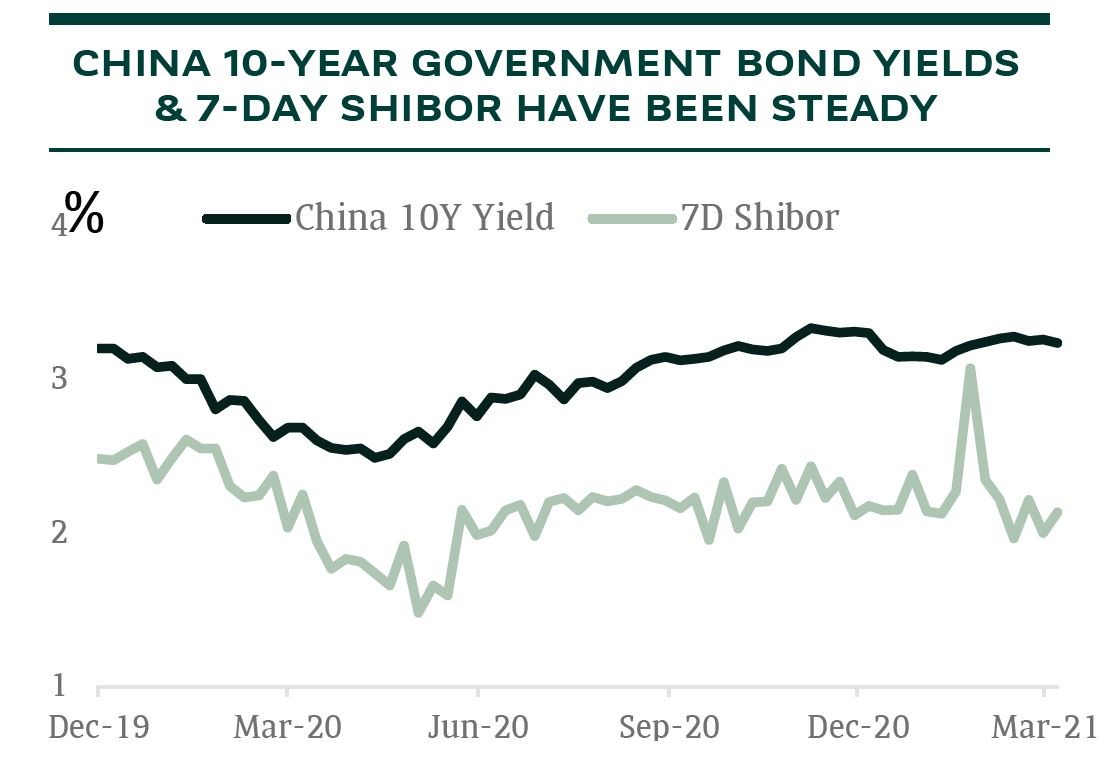 Source: Bloomberg, BNP Paribas (WM), 25 Mar 2021 Past performance is not indicative of current and future performance 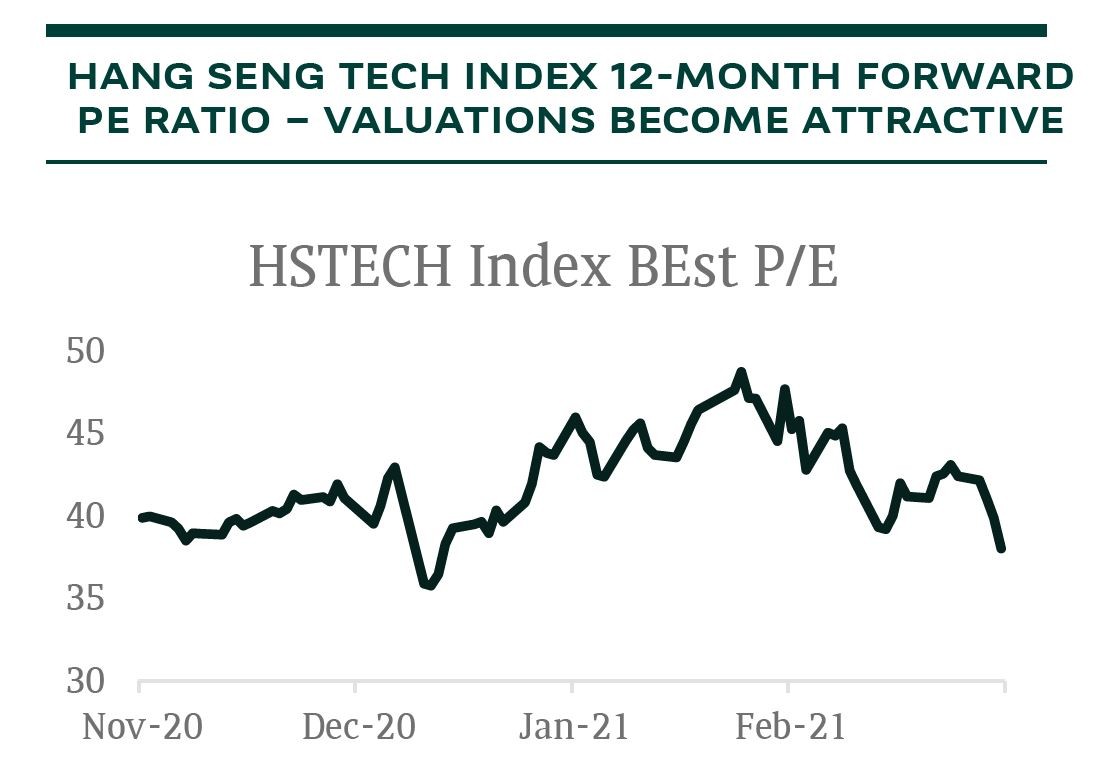 Source: Bloomberg, BNP Paribas (WM), 25 Mar 2021 Past performance is not indicative of current and future performance

A lot of negative newsflows have been priced in China techs

We downgraded Asian tech sector from positive to neutral in early February after the spectacular rally, and we will look for opportunities to upgrade the sector again. While further anti-trust regulatory guidelines to rein in powerful internet platforms is not ruled out in the near term, we believe that the Chinese authorities do not aim curbing the development of internet companies or fully breaking them up given that the platforms bring innovation and digitalization to the overall economy. This is one of the top priorities that had been reiterated during the latest NPC. We believe the aim is to shape a more balanced and competitive landscape to achieve a more sustainable growth.

We also expect the risk has been increasingly priced in and revenue impact on the sector as a whole should be manageable. Hence, the deep corrections offer good re-entry points for medium-term investors to accumulate select, high quality tech names in tranches, particularly in grocery e-Commerce/food delivery, mobile gaming, online entertainment, online travel agency and advertising.

Following the inclusion of some “new economy” stocks in the Hang Seng Index (HSI) and the launch of Hang Seng Tech Index last year, which drove significant inflows into the HK stock markets, Hang Seng announced recently the proposed enhancements to the HSI which would further increase weighting to “new economy” sectors (IT, consumer and healthcare) from 44.5% to 52.4%.

Some key changes are:

(2) to expand representation to 7 industry groups;

(3) to shorten inclusion of new listings to 3 month.

Overall, these changes not only would attract more advanced companies to listed in HK, but also engage more global asset allocators to track HSI. In addition to the continued “Homecoming” theme with the China ADRs listed in the US returning to HK for secondary listings, we expect significant inflows into HK stock market in the years to come (Hong Kong has seen 29th consecutive week of foreign net inflows as of 19 Mar 2021).

Cyclical and structural factors are in place to drive the uptrend of domestic A-shares, Hong Kong-listed China equities, and select high quality tech companies. Weaknesses are good buying opportunities to re-enter the Dragon!