Global equity markets recovered meaningfully in June from the previous month’s turmoil, partly due to optimism about trade talk between President Xi and President Trump at the G20 at end of the month, and partly due to anticipation of more supportive Chinese policy actions.

Although both sides expressed their wishes to continue the high-level negotiation and agreed to refrain from further escalating the tension, we see the handshake agreement largely a can-kicking exercise.

We anticipate relatively less positive market reaction compared to the previous meeting in December 2018, as the market is now fully aware of how progress could shift the other way round, regardless of how close an agreement could be reached, especially with Trump’s administration practices to use tariff as a means to address non-economic issues.

In China, the takeover of Baoshang Bank on 24 May 2019 caused serious concerns by investors, but the Chinese administration launched a series of policy actions immediately after and had successfully drove a market recovery.

On the other hand, May macroeconomic data came in mixed, which confirmed our view that the recovery seen in 1Q19 was rather fragile and had not reflected impact from the trade tension.

While the China-US relationship will continue to dominate investors’ sentiment for the rest of the year, we also see positive market supports from

We believe that earnings downside risks in HK/China market are relatively low when compared with the U.S in 2019.

We think the possibility to see HK/China equity markets to drop below 2019 bottom is rather low on the back of the much lower interest rate outlook, which provide the markets with significant valuation supports. Technically speaking, both Hang Seng Index and MSCI China had formed double-dip in late May 2019, which supported our argument.

A YEAR OF TWO HALVES?

We also projected at the beginning of the year, 2019 could be a year of two-halves – a volatile first half followed by a recovery in the second half, which seems to be an accurate description of HK/China equity market performance year-to-date.

With a relatively more positive second half outlook, it is natural to ask “Are we going to re-test 2018 peak?”

In our view, the answer largely depends on the development of the China-US relationship.

On the positive front, although it is our base-case scenario that the current situation, i.e. no trade deal but no additional tariff would last till the year-end, we see higher chance of trade tension de-escalation when we get closer to the US presidential election time.

As mentioned before, dovish central banks plus additional policy stimulus should provide both valuation and earnings supports to equity market performances.

The true question is, after all, whether the trade tension has already resulted in significant enough drag to the trajectory of global economic growth, and accelerated the end of the current economic cycle.

SIGNS OF WEAKNESS FROM RECENT US DATA

Although the overall performance remains solid, the recent US economic data have shown signs of softening, from manufacturing activities to consumption confidence.

Moreover we observe that small-cap and transportation sectors have underperformed significantly, which normally are signs of US domestic economic weakness. 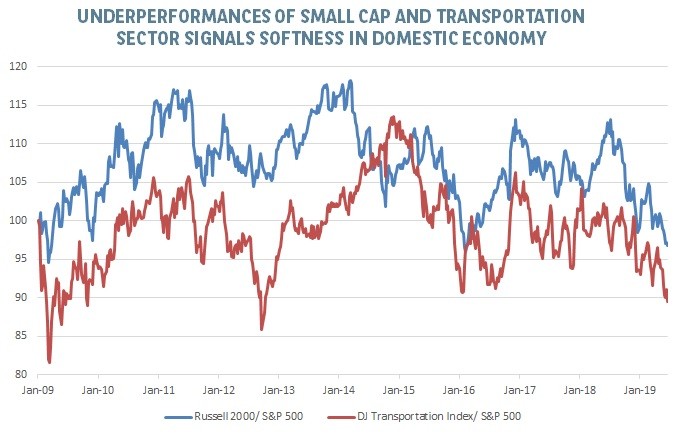 IS THE TECH SECTOR A CONCERN OR THE BELLWETHER OF THE MARKET RECOVERY?

We are particularly concerned about the technology sector, especially in the semiconductor sub-segment. The recently imposed sanction against Huawei has further delayed the recovery of the semiconductor industry, with a few leading chip-makers cited slowing demand from China as the key reasons for them to revise down their 2019 earnings guidance.

If such sanction is being extended to other Chinese technology companies, and ultimately restrict Chinese companies to participate in the US 5G infrastructure developments, we would see significant earnings downside risk on semiconductor companies, and further pressure on their already high valuations.

In our “Investment Perspectives – Equity” published in January 2019, we expected technology sector to be the bellwether of the market recovery in the second half of 2019. While it is still possible, it largely depends on the development of the China-US relationship.

On the other hand, with global central banks now adopting a more dovish stance, the lower interest rate outlook and the on-going sluggish trading environment also means that banks, being one of the largest sectors globally, also cannot be relied on to drive the equity market rally.

To conclude, while we are confident that we have already seen the market-bottom in 2019, there is good chance that we may also have seen the market peak of this late cycle as well.

The key to the second half performance in 2019 will largely dependent on the binary outcome of the China-US relationship.

ADOPT A BARBELL STRATEGY DURING TIME OF TURBULENCE

We strongly believe that a barbell strategy is still effective given the binary outcome of the on-going trade negotiation.

On one hand, we think investors could consider increasing positions in defensive sectors, such as consumer staples, real estates through REITs, telecommunication, as well as utilities. 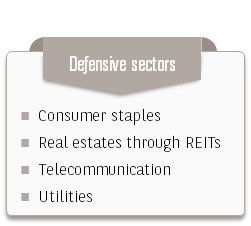 Among companies within these sectors,

- we particularly favour those offering high dividend yield of more than 4.5% (i.e. above the average dividend yield of both Hang Seng Index and HSCEI, according to Bloomberg consensus estimates as of 3 June 2019),

- as well as those with their operations mostly based in Hong Kong or other overseas markets, or focusing on China domestic market with limited exposure to US exports, in order to avoid downside risk and volatility due to the on-going trade tension. 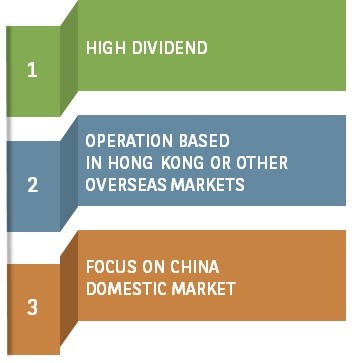 On the other hand, we reiterate our stance that we do not think investors should forfeit all their exposures to high beta sectors such as technology sector, which has seriously got hit due to the US sanctions against Huawei, in order not to miss out the potential sharp share price rebound once a trade agreement is reached.

We also do not expect major HK/China indices to retest the previous trough level. Given the limited potential downside risk, in order not to miss out the potential sharp share price recovery, we recommend investors to adopt a disciplined buy-on-dip approach: to buy in tranches at every 4-5% share price corrections high quality stocks identified.

Source for the charts: BNP Paribas, Bloomberg, as of 30 June 2019. The above charts are for reference only and do not represent current or future performance.