Sentiment can change fast. European stocks enjoyed a remarkable summer bounce. From the lows in early July 2022, the STOXX 600 rose 10.7% by mid-August 2022.

2Q22 earnings were also better than feared. Earnings per share (EPS) rose 16% year-on-year, a positive surprise of 3% versus consensus, driven by energy. Stocks that beat estimates were rewarded more than normal. Many companies from consumer goods to manufacturers were able to pass through higher prices, while automakers shifted production to higher-margin models. In general, earnings estimates were being raised after solid 1H22 numbers.

But the market rally rested on shaky foundations. The STOXX 600 has since broken the July 2022 lows (and the psychological 400 level), driven by higher expectations for European Central Bank (ECB) rate hikes and increasing fears of a recession.

The macro narrative has become more challenging. Encapsulating that was worse-than-expected Eurozone PMI (Purchasing Managers' Index) data in August 2022, the third decline in a row and indicating that business activity has been contracting throughout the quarter.

The energy crisis remains front and centre of the macro story, driving an inflation picture that led the ECB to raise interest rates by 75 basis points in September 2022, its single biggest hike since its formation in 1998. Eurozone inflation hit a new high for the 11th consecutive month as energy prices continued to rise. European governments are mobilising to shore up supply and storage, and limit the impact of reduced Russian energy supply. But more than 90% of the gas consumed in the euro area is imported. It is the primary energy source for the industrial, services (non-transport) and household sectors. This suggests the market cannot escape some broad-based effects. Already, countries are preparing for a tough winter.

Much of this is already being reflected at the stock level. For example, Germany’s heavy reliance on Russian fuels has left its corporate heavyweights vulnerable.

And this has played out in its stock market, the weakest performer of the major European markets over the last three months. Cyclical German stocks are particularly at risk from this cocktail of soaring energy, inflation and recession risk, with chemicals, automakers and industrials making up about 45% of the DAX.

Currency has also become a bigger part of the conversation, in the wake of the weakness in the euro. The upside from the currency decline was that a rebound in visitor numbers over this summer provided support for tourism and leisure stocks. Exporters can also call on a more favourable currency environment. But the temporary holiday season boost has passed. And exporters still face the supply chain and input cost pressures. The broader deteriorating growth picture across the region does suggest scope for consensus EPS expectations to be revised lower.

We expect Europe to enter into a recession in the coming months, the depth and duration of which will be partly determined by how the energy crisis evolves.

The STOXX 600 still trades at an undemanding 2023 estimated price-earnings ratio (P/E) of 10.1x (see Chart 1). Companies providing 3Q22 earnings updates get the opportunity to reset market expectations. Although there may be market volatility as we approach the year-end, we still see selective value within European equities for investors with a long-term investment horizon. 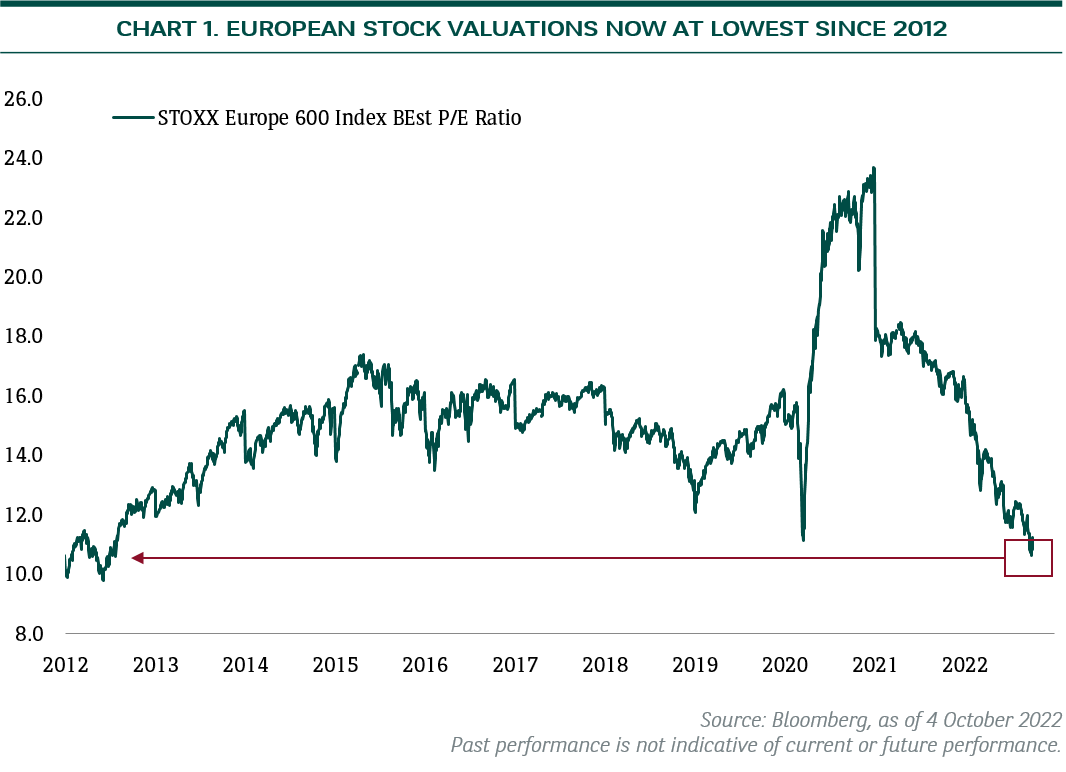 Liz Truss became the UK’s new Prime Minister, and in the process inherited a host of major challenges.

While inflation and increased borrowing costs are hurting companies across Europe, the financing situation is especially acute in the UK. At a time when households were already struggling with rising food and petrol costs, utility bills were set to rise by as much as 80% in October 2022 due to Russian energy supply restrictions.

The new Prime Minister’s first major act was to set out a huge energy support package. But the market’s bigger focus was the new Chancellor’s tax cut proposal to support the economy – the largest cut in 50 years. The market response was undeniably negative, sending sterling to a record low against the dollar and leading to a collapse in the gilt market. The instability prompted several mortgage lenders to withdraw new offerings, adversely impacting domestic bank stocks.

A possible surge in government borrowing that could stoke even higher inflation may also make the Bank of England’s task harder. The central bank delivered a 50 basis-point rise in interest rates in September 2022 to 2.25%, the seventh consecutive rise at a meeting. But the bank may not yet be at “peak hawkishness”.

Profit warnings by some retailers reflect the pressures on domestic consumers. Yet, the FTSE 100 has continued to hold up in spite of these crosswinds, outperforming other major markets. The index’s overseas bias (70% of revenue) has been key to this.

The FTSE 100 is less exposed to the domestic narrative and imported inflation. Thanks to its higher bias in healthcare and consumer staples, and significant exposure to energy and commodities, the FTSE 100 is down only 6.8% year-to-date. But the recent currency slide has had a notable impact on the relative performance in dollar terms against global peers.

Also, almost half of dividends of FTSE 100 companies are paid in dollars and this cash flow revenue stream appeals. The risk premium may have risen on the back of events, but the FTSE 100 trades on a 8.3x 2023 estimated P/E and remains favoured over Continental Europe.