French vineyard markets: what are the key figures for 2016 ?

With the French vineyard sector in better financial health, barely any appellations saw a fall in the price of land in 2016. 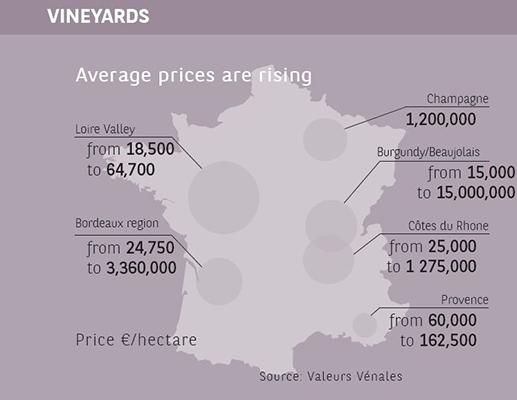 Although land prices are broadly flat at the entry level, average prices have been rising for the best part of ten years. This increase is chiefly thanks to the Champagne appellation, but also to other regions such as Bordeaux (the leading market by value), Burgundy, the Rhône Valley and Provence. Over the last ten years, prices for all appellations have progressed by 6.7% per year, or excluding Champagne, by 3.8% on average. As is the case in agriculture, almost one in three hectares is sold with a tenant in situ, and transactions represent less than 2% of the total vineyard area. The average price of vine is around €140,000 per hectare, but this varies considerably between region and appellation.

The market for vineyards is particularly buoyant in Bordeaux. Around 2% of its 115,000 hectares of vineyard is sold each year, amounting to some 2,500 hectares. There is a wide range, accessible to all types of buyer: from €15,000/ha in the Bordeaux appellation to more than €3.3 million/ha for Pomerol. Prices are on the rise in the most prestigious appellations. At €1.5 million/ha, the price for Saint Emilion shot up by 21.3% compared with 2015. Pomerol, which holds the record for the most expensive land, rose by 15.6% year-on-year. For Saint Estèphe, prices climbed by 10%, to €732,000/ha, from €663,000/ha a year earlier. Margaux and Saint Julien are valued at more than €1.5 million/ha. Pauillac no longer holds the price record, but still fetches €2.75 million/ha. At the bottom end, prices are rising less rapidly. Prices for Bordeaux and Fronsac are now picking up, posting a 5% increase in 2016, having fallen by more than 50% over the previous 20 years.

Vineyards in Burgundy are rare on the market and very diverse, with 101 appellations and 1,247 “climates” recognised by UNESCO. Major past transactions have created an ever-growing enthusiasm. In the “Village” appellation, vineyards cost between €0.8 million and €1.3 million per hectare, while the best “Premier Cru” appellations fetch between €2 million and €3 million per hectare and prices for the very rare “Grands Crus” are rocketing. This tension at the top end is having repercussions across the whole region, and Côte-d’Or winemakers look out for less expensive vineyards, at between €20,000 and €100,000 per hectare, in Saône-et-Loire and Beaujolais. Demand is growing, boosted by a shortage of grape supply.

Demand is mainly local. External investors do not show much interest in this region, which nonetheless offers a number of advantages. Vineyard prices have barely risen in the last ten years. They currently stand at €18,500 per hectare in Anjou, and at €64,700/ha for Saumur-Champigny.

In the north of the region, the market is very limited, and prices in Côte-Rôtie and Hermitage can rapidly top €1.2 million per hectare. Prices in the Hermitage appellation went up 5% in 2016 to €1.27 million/ha, while in Côte-Rôtie, the year-on-year increase was 4.5%, to €1,23 million/ha. In the southern Côtes du Rhône area, the Côtes du Rhône appellation commands a price of €15-25,000/ha, while Côtes du Rhône Village costs €25-30,000/ha. Prices for the region’s Cru vineyards are high and continue to gain momentum. Châteauneuf du Pape edged up by 2.5% in 2016, and remains the sector’s most expensive appellation at €433,000/ha.

Provence rosé is growing in popularity, including at the international level. Entrepreneurs in the wine business in Champagne, Bordeaux, Burgundy and Côtes du Rhône are looking to add Provence rosés to their range. Prices for the Cassis appellation, especially Bandol, continue to show steady growth. In 2016, prices in Bandol rose by 2.5% to €162,500 per hectare, compared with €144,500/ha in Cassis.

This market is the leader in value terms. It is boosted by the sale of small surface areas averaging around 15 “ares” (1 are = 100m²). This makes them accessible to a large number of buyers, who are mostly established winemakers. The average price per hectare of vine in the Champagne appellation is approximately €1.2 million. After reaching a high in 2014, it fell in 2015, but edged up by 1.8% in 2016. Despite everything, the price of vines in Champagne has grown by 3.3% per annum over the last ten years. In the highly prized Côte des Blancs area, prices fluctuate between an average of €2 million/ha and a maximum of €2.2 million/ha.

For the in-depth analysis of the wine market, read Agrifrance 2017's report