Despite ongoing challenges in the retail sector, global commercial real estate markets enjoyed another stable (or strong) year in 2018.

This is an extract from our Global Real Estate Report 2019 H1: Do Property Cycles Still Matter?

Will the current property cycles in Europe continue?

The positive momentum for commercial real-estate investments in Europe continued in 2018, with an investment volume of EUR 264bn in 2018 for all commercial property segments combined, only 2% below 2017, which was a record year.

“On the back of a stable occupier market, European commercial real estate enters 2019 with some of the strongest fundamentals ever seen on the continent.” (source: BNP Paribas Real Estate, At a glance: European Property Prospects – February 2019).

According to BNP Paribas Real Estate, gross initial prime yields (GIYs) in some core markets stand at a historically low level, so there is little room for further compression, bar the logistics sector.

Let’s take the European office market as an example. “For 70% of the office markets that we cover in our report, prime yields will remain stable in 2019. We do see potential for property yields to start unwinding from mid-2020 coinciding with resurgence in core inflation and thus monetary policy tightening. Even so we think the increase will be gradual, with the cumulative average rise in yields over the 5-year forecast period expected to be +50bps for offices and +35bps for logistics.” (source: At a glance: European Property Prospects – February 2019).

Forecasts for office rental growth in Europe range from virtually non-existent, to around 8% this year. Berlin is expected to enjoy the strongest growth in office rents of 8%.

Even though Spanish cities have already experienced sharp growth, they still have some potential with expected average annual growth exceeding 2% over 5 years. French office markets are projected to generate stable or slightly higher rents, while London’s could decline initially due to Brexit.

As we wrote in our previous property report published in October 2018, capital appreciation returns are set to slow further. Values of tier-1 offices cannot go up much higher, because GIYs would be ridiculously tight.

As a result, total returns booked by first-grade offices—after adding net rental income—are expected to be in the single digits for most office markets in 2019. One exception is Berlin (+11%), a market supported by an expected growth in rents, despite carrying the lowest real-estate yield in Europe (2.7%).

“In contrast to the prime segment, the broader market (including secondary assets) will have a higher level of return. The total return here will average +6.75% in 2019. There are only three markets: Berlin (+16%), Marseille (+11%) and Amsterdam (+10%) with double-digit returns."

"A large part of this is due to the higher yield, providing a higher income return relative to the prime segment. In the case of Berlin, again the expected strong rental upswing is supporting higher capital growth.” (source: BNP Paribas Real Estate, February 2019).

How did European debt pricing look at the end of 2018? Senior debt contracted in first-class European offices and the loan-to-value ratio (LTV) was below 65% in many markets.

Borrowing costs for commercial real estate generally decreased in 2018, due to lower swap rates and margins. "From the lenders' point of view, risk undoubtedly increased in 2018; yields decreased, underlying values increased and key risk measures appear to be tight in some markets, with costs generally below 2.5% and very often below 1.5% all-inclusive." (source: CBRE, European debt, 2018 in review, Outlook for 2019, March 2019).

For borrowers, lower debt costs mean that there are many markets which offer them the required IRRs. 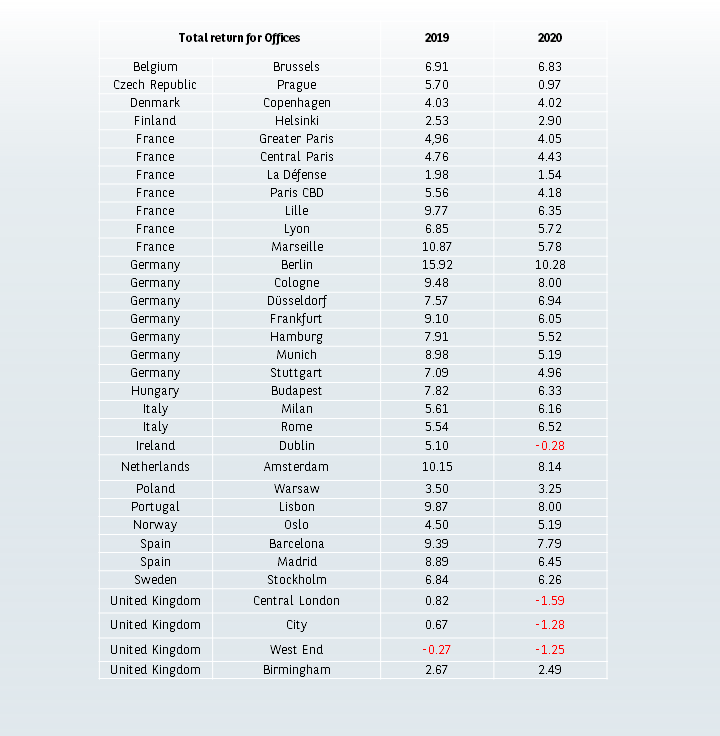 In 2015, the government introduced the ‘non-resident capital gains tax’ (NRCGT), which applied to all individuals, trusts and companies having non-residency status. However, at the time, commercial properties were not affected by the NRCGT.

As a consequence, non-residents did not pay any tax on UK commercial property (retail, offices, hotels, etc.) whether they owned the property directly or through a company between 2015 and 6 April 2019 (the start of the new tax year).

NRCGT on the taxable gain made from selling commercial property. Where applicable, the NRCGT will be applied to any taxable gain realized between the future disposal point and the new base date of 6 April 2019 (source: BNP Paribas Real Estate, April 2019).

Retail under pressure but not catastrophic

The retail segment is still under pressure. However, the newly-coined term, 'disruption', may not be appropriate to describe in detail what is happening in Europe (and indeed in other parts of the world).

Online sales do not necessarily pose a threat to the existence of physical stores. In fact, they can support them when retailers adopt a so-called ‘omni-channel’ approach. Retailers in Europe have developed a unified supply chain, where physical and online stores use the same distribution systems (with 'click and collect').

E-commerce and logistics companies will continue to play a leading role in the industrial real-estate industry, with 'last mile delivery' becoming increasingly important.

‘Last mile’ is a term used in supply chain management and transportation planning to describe the movement of people and goods from a transportation hub to a final destination in the home.

Expectations of the RICS: Focus on Southern Europe and Germany

Europe continues to deliver the best results in absolute terms, both in terms of investor and occupier markets, with Greece, Hungary, Portugal and Spain ranking as the best-performing European countries.

The Netherlands and Germany continue to generate considerable interest, although the latter is considered to be closer to the top of the cycle and generally tighter from a valuation point of view.

The picture is rather bleak in the retail sector. “Changes in consumer behaviour and the shift to online sales, in particular, have a negative impact on retail occupants (margins under pressure), with vacancy rates increasing across the sector in Europe as a whole. In France, the retail sector, particularly in secondary locations, is also facing more difficult conditions. Indeed, investor demand remains in decline, due to the deterioration in occupants' fundamentals and the resulting increase in vacancy rates.” (source: RICS Global Commercial Property Monitor, 26 February 2019).

What are the trends in the US commercial real estate markets?

The National Council of Real Estate Investment Fiduciaries (NCREIF) has published the first quarter 2019 (1Q19) results for the NCREIF Property Index (NPI). The NPI's quarterly total return—generated by a combination of offices, retail, industry, hotels and apartments—was very good in the first quarter.

Industrial properties, which are primarily warehouses, remained the best-performing property asset class, with a return of 3.02% for the quarter although down from the prior quarter’s return of 3.40%.

Office activities took the second spot with a return of 1.63% that was just slightly less than its 1.65% return in 4Q18. Returns from Apartment activities were unchanged at 1.35% while total returns from the hotel business dropped from 1.21% to 0.44%. Remarkably, returns from Retail rebounded during the quarter from a negative 0.43% in 4Q18 to a positive 1.74%.

In 2018, the performance of the office leasing markets remained solid, with full-year 2018 volumes up by 21% over 2017. Flexible office space was one of the main drivers of rental activity.

So, there may be opportunities among developers in the Tokyo office market, where demand is strong for new buildings.

Office rents in Asia Pacific remained steady, although they grew at a slower rate of 1% quarter-on-quarter in 4Q18 (vs. 1.2% in the previous quarter). Rents in Hong Kong Central continued to slow due to weaker demand from financial companies in Mainland China.

In addition, quarterly rental growth in Shanghai’s Central Business District decelerated as well because of a significant amount of new supply in Pudong. In Seoul, quarterly office rents declined slightly in 4Q18. However, office rents in Singapore continued to climb during the quarter (source: The Office Index, Jones Lang LaSalle, 4Q18).

Hong Kong is seeing sustained demand for investment opportunities in self-storage. By definition, a self-storage facility is usually divided into small units (some of them may be climate-controlled), and are also called mini-storage facilities or mini-warehouses. Warehousing storage and services are often provided to multiple customers.

Undoubtedly, Hong Kong commands the highest residential prices in the world, with the average resident living in only 160 square feet (15m²). Hong Kong was already undersupplied in self-storage rental units due to a terrible fire in June 2016 that resulted in the closure of more than 100 facilities, representing approximately 25% of ‘the self-storage market’ (source: Infrared NF Hong Kong, March 2019).

Actually, self-storage facilities could be considered as a way for residents to extend ‘residential space’.

We favour offices and logistics over retail investments—for the time being—regardless of geography. It is clear that we are in the ‘late’ property cycle in many markets, though we believe that investors will not get stuck at the losing end of cyclical swings in the property market.

Capital markets remain very supportive indeed. However, investors should take out moderate levels of debt to avoid a ‘fire’ (i.e. forced) sale at the end of a market downturn.

Caution is needed for lower-tiered markets. It is better to invest in properties that can be repositioned in prime locations. Investors cannot afford to ignore lower capital appreciation returns in the coming months.