While a global synchronised monetary easing is gaining momentum, it may not be sufficient to reverse the trend of a synchronised global slowdown, especially given the headwinds from lingering uncertainty in trade tensions. Also, some developed countries are reaching their limits to do further monetary easing.

No doubt that any sustained resolution of Sino-American trade conflicts will remove the uncertainty, boosting business confidence and reviving the economy. However, a major trade deal between the US and China seems more remote though a limited trade deal or trade truce are still possible.

Therefore, fiscal policy is important and is believed to be a more efficient counter-cyclical tool to stimulate aggregate demand and raise inflation expectations. In fact, fiscal stimulus has already been underway, driven mainly by China and the US. There have also been increasing evidence of fiscal stimulus in Asia in recent months.

US: a big fiscal boost is less likely before election

Following a massive tax cut in 2018, a budget deal was passed in early August 2019 to eliminate spending caps, suspend the debt ceiling until July 2021 and increase spending allocations over the next two fiscal years. However, the latest move will only avoid a significant fiscal contraction rather than stimulating growth.

Some small fiscal stimulus through executive action similar to the recent farm bailout are possible before the November 2020 election. Nevertheless, a major fiscal boost is less likely with Democrats in control of the House of Representatives.

After running 5 years of fiscal surpluses, market expectations are growing for fiscal stimulus by Germany, which traditionally has been more reluctant to make aggressive use of fiscal tools. However,  policy makers are likely to be reactive rather than proactive.

They may only take fiscal actions when the economy is in recession. Hence, implementation lags implies that the positive impact of fiscal measures on the economy may not arrive in time for 2020. 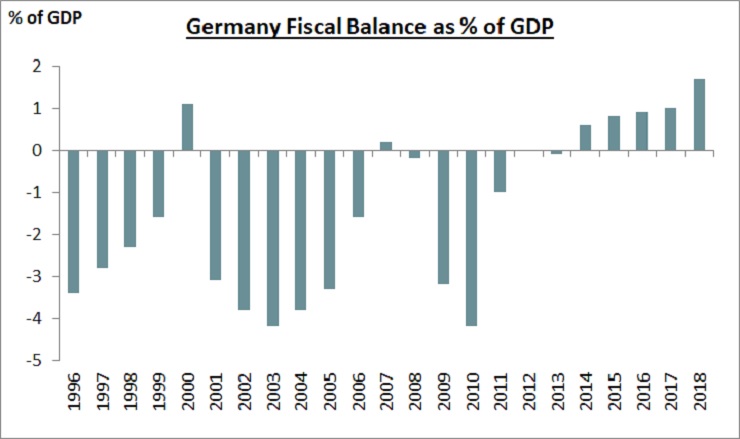 UK: fiscal stimulus in the event of “no deal” Brexit

In the event of “no deal” Brexit, a potential recession will likely be counteracted by fiscal stimulus, further interest rate cuts and a restart of QE. If the UK leaves the EU with a deal or ends up remaining in the EU, we expect some expansionary fiscal policy accompanied with rate cuts.

After the consumption tax hike kicking in from 1 October 2019, government agencies and ministries have requested a new record high budget of near JPY 105 trillion (USD 986 billion) for FY2020 after an all-time high budget of JPY 102.7 trillion for FY2019 to avoid the contractionary effects arising from the tax hike.

Fiscal spending has played a leading role in the latest round of policy easing, including the announcement of RMB 2 trillion in tax and fee cuts (USD 298 billion) last year. More efficient use of special local government bonds and easing on credit financing will boost infrastructure further in 2020. While China’s official fiscal deficit has been capped below 3% of GDP, it is estimated that the country’s overall fiscal deficit (official plus off-budget) runs around 10-11% of GDP. 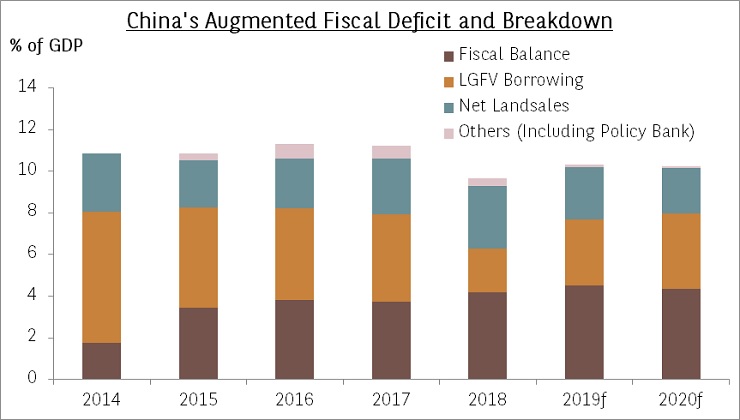 Apart from China, a growing number of countries in Asia are engaging in ambitious fiscal plans. India announced surprise headline corporate tax cuts from 30% to 22%, worth INR 1.45 trillion (USD 20 billion) and 0.7% of GDP. Indonesia is planning to cut corporate tax gradually from the current 25% to 22% in 2021 and 20% in 2023. Thailand announced a THB 316 billion (USD 10 billion) stimulus package in August 2019 aiming at spurring consumption among mid- to low-income earners. South Korea proposed a record-breaking budget of KRW 514 trillion (USD 424 billion) for next year, representing a 8% increase from this year’s expenditure when supplementary budget is taken into account.

In an attempt to benefit from US-China trade war, India allows new manufacturing companies to pay corporate tax at only 15% effective 1 October 2019, a measure that could attract some investment from companies looking to shift their supply chains out of China. Thailand also announced a 50% tax cut for businesses moving out of China, while Taiwan’s “homecoming” policy with provision of industrial land and tax breaks announced in November 2018 has so far been successful in facilitating the return of 142 companies with approved investment projects valued at TWD 611 billion.

Fiscal policy is “less expensive” during a rate cut cycle

With diminishing returns from cutting interest rates particularly as rates move deeper into negative territory, fiscal policy will be more effective in reviving growth. Implementing fiscal measures during a monetary easing cycle is also “less expensive” as borrowing costs as well as impact of fiscal expansion on debt sustainability are lowered.

Fiscal stance globally in general is likely to be at best, just moderately expansionary in 2020. A sizeable widening of the fiscal balance (mega stimulus) is unlikely in the absence of recession. Even if there is a strong consensus to use the fiscal tool, implementation is likely to take time.

Therefore, the global economy is likely to get bleaker before it gets brighter. Investors should stay invested in a diversified portfolio which includes not only the traditional equity and fixed income assets, but also some alternative investments such as exposure to gold and hedge funds.