How is it that real-estate returns have continued to increase in recent years in most residential and commercial property markets worldwide? Why haven’t we seen a real correction, as in previous decades?

“ These are fascinating times for property investors, with real estate and macro-economic factors coming into play.

The decline of 10-year nominal interest rates booked by sovereign bonds was a remarkable and somehow unanticipated trend in the first quarter of the year.

At present, real rates — adjusted for inflation — remain negative in a number of economically mature markets, such as Europe and Japan, with the US being an exception.”

The German 10-year government bond yield temporarily fell to -8 basis points at the end of March on fears of weaker economic growth re-emerging in Europe (source: TradingEconomics, 27 March 2019). So, growth worries are back, and obviously, the Brexit saga is not helping things along.

This fall came after the US Federal Reserve Bank (Fed) changed its monetary stance at its March meeting, by reducing interest rate projections from 2 to 0 hikes this year, with Fed Chairman Jerome Powell justifying his cautious position by the global economy’s headwinds.

In fact, fears of a slowing economy started to dominate inflation concerns. The Fed's fund rate is expected to remain unchanged at 2.50% for the rest of this year. US sovereign bonds also reflected

North America’s maturing economic growth cycle, with the spread between the 10-year and 3-month Treasury Notes falling briefly below zero on 25 March. This led to an inverted yield curve for the first time since 2007 (source: TradingEconomics).

However, at the end of April, bond yields inched up again, driven by reasonable economic growth projections for China. In April, BNP Paribas Wealth Management lowered its 12-month targets for 10-year sovereign bond yields to 2.70% for the 30-year US Treasury Note, and to 0.30% for the 10-year German Bund. 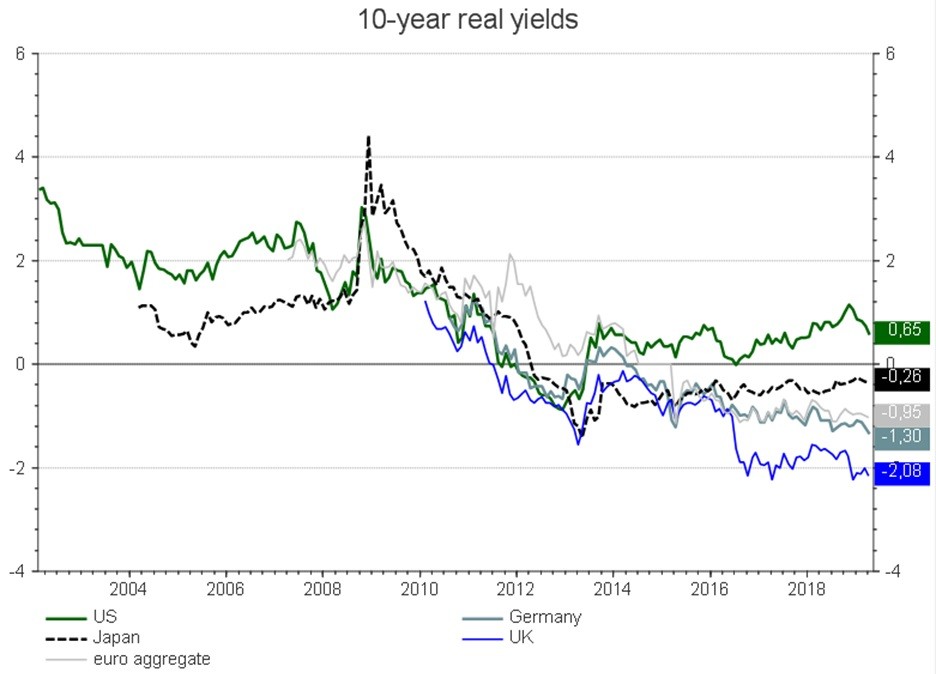 Whether or not fears of weaker economic growth are justified, and whether the European growth scenario is increasingly flirting with Japan's scenario, this does not matter to property investors.

Today, there are different degrees of uncertainty in the investment market. For example, what will be the outcome of the ongoing trade negotiations between the three biggest economies of the world (US-China, US-Europe)? And how will the endless Brexit saga unfold?

Of more relevance to property investors is global real interest rates. We assume the latter will remain reasonably low or outright negative for quite some time irrespective of economic trends, but we do not exclude a modest increase in the coming months.

Listed Real Estate Investment Trusts (REITs) are in a good position to demonstrate the correlation between interest rates and returns (although the correlation is usually short-lived). The majority of returns (share price evolution + dividends), generated by REITs, ended in negative territory last year.

Continental Europe saw a bad performance, with losses of up to 16% in France for instance (though the disparity in total returns between European countries was staggering, for example France vs. Belgium and Germany). Incidentally, the modest increase in nominal interest rates definitely had some influence on this outcome in 2018.

What a difference this year! Since January, REITs have been experiencing a spectacular recovery overall, mainly in anticipation that interest rates will remain low for quite some time. Ironically, fears of a slowdown in the economy appear positive for REITs at first glance.

Meanwhile, what has happened in the global occupier markets? Worldwide, commercial real-estate markets enjoyed another stable (or strong) year in 2018, despite ongoing challenges in the retail sector. Yet, data were steady for other commercial markets, with little change from a year ago.

The logistics sector continued to be bolstered by a shift to online sales whereas many office markets posted attractive returns (regardless of geography). Remarkably, in the US, returns from retail activities mildly rebounded during the fourth quarter of 2018.

Furthermore, global housing markets either remained resilient in most parts of the world despite price disparities observed in specific countries (US, France, Germany) while some country/regional markets continued to recover (Southern Europe, Singapore). However, house prices started falling in ‘overvalued’ markets such as Australia, Canada, Switzerland and, amazingly, Hong Kong.

The risk premiums ‘required’ by real-estate investors are currently quite low. In some gateway cities, they may be uncomfortably low, although the gap between risk-free rates and rental yields is still at least 200 basis points.

Indeed, monetary policy—as described above—remains flattering to property investors, allowing them to continue to allocate funds to real estate. We do not expect this to change soon.

So what do we expect for this year? Although we refuse to speak of a ‘disconnection’ between capital markets (driven by an abundant supply of capital) and the space markets (occupier markets), we believe that property yields (capitalization rates) cannot decline indefinitely at a time when rental growth is modest or flat.

The logistics sector is an exception to the rule, as is a number of specific prime office markets, like Berlin and Singapore.

To cite but one example, even though the European prime office markets are fully priced, this segment is expected to deliver a 4% unlevered total return on average in 2019.

Gross initial yields (GIYs), carried by offices, may slightly expand by roughly 50 basis points (bps) while the increase in yields should be even more modest for logistics assets.

In a nutshell, yes. We believe they are still relevant, but perhaps a little less than before. Even though investors try to avoid buying near the peak of property cycles, it is not the end of the world if they do.

Probably the most important cause of investors being forced to sell in a downturn is the use of (too much) debt, as seen during the previous credit crisis of 2007-2009.

But investors with acceptable loan-to-value (LTV) ratios can usually ride out any downswings, even prolonged.

As such, our real-estate investment strategy is consistent and unchanged, with a particular recommendation for the ‘value-added’ property segment, especially in Europe (including the United Kingdom).

Nonetheless, real-estate investments in top-tiered locations remain attractive, even though trophy bricks are quite pricey as we are nearing the last stage of the property cycle in some areas.

The focus should therefore be on the net rental yield, i.e. on the tenant, and less on capital appreciation return prospects