China’s GDP growth accelerated to 4.8% year-on-year (yoy) in Q1 2022 from 4.0% in Q4 2021. Though still shy of the 2022 growth target of 5.5%, Q1 2022 GDP growth rate managed to beat market estimates. But monthly economic data such as industrial production and service output painted a less rosy picture. The latest wave of Omicron-variant outbreaks that swept across China is expected to deal a heavy blow to the economy in April. Although infrastructure investment growth has sped up since March, we believe the gained momentum will not be able to fully offset the decline in manufacturing and property investment growth.

Since the government reiterated its objective of “keeping economic growth within a reasonable zone” at the Two Sessions this year, there has been high hope for large-scale policy stimulus which is necessary for achieving the 5.5% GDP growth target. So far we have seen mostly monetary policies, but few fiscal policies. The PBoC2 announced to lower RRR3 on 15 April 2022 and lower foreign exchange deposit reserve on April 25. On 18 April, PBoC and SAFE4 jointly unveiled 23 measures to revive the economy. Yet, it has all been quiet on the fiscal front. With the “dynamic zero-COVID policy” still in place, it is understandable that government officials may prefer to put stimulus on hold. However, we remain hopeful for synchronised monetary and fiscal stimulus soon after the COVID outbreak in mainland China is brought under control.

Where Do We Go From Here?

China’s GDP growth accelerated to 4.8% yoy in Q1 2022 from 4.0% yoy in Q4 2021. Though still shy of the government’s 2022 growth target of 5.5%, Q1 2022 GDP growth rate managed to beat market estimates. However, monthly economic data such as industrial production and service output painted a less rosy picture. Industrial production growth was 5% yoy in March, down from 7.5% yoy in January-February this year. The monthly service output index fell from 4.2% yoy in January-February to -0.9% yoy in March. On the demand side, retail sales yoy growth slowed from 6.7% to 3.5% with a notable contraction in discretionary consumption. The latest Omicron outbreaks which have swept across China were expected to deal a heavy blow to the economy in April. Although infrastructure investment growth has sped up since March, we reckon the gained momentum will not be able to fully offset the decline in manufacturing and property investment growth.

Since the government reiterated its objective of “keeping economic growth within a reasonable zone” at the Two Sessions in early March this year, there has been high hope for large-scale policy stimulus. We believe it is absolutely necessary to provide major boosts to the economy in order to achieve the 5.5% GDP growth target this year. So far we have seen mostly monetary policies, as we predicted last month, but few fiscal policies. The PBoC announced to lower RRR on 15 April 2022 and foreign exchange deposit reserve on 25 April 2022. On 18 April, PBoC and SAFE jointly unveiled 23 measures to revive the economy. In contrast, the fiscal front has been quiet – we do not see any initiatives to underpin consumption, industrial activities or private investments. With China’s “dynamic zero-COVID  policy” still in place, it is understandable that government officials may prefer to put stimulus on hold. However, we remain hopeful for synchronised monetary and fiscal stimulus soon after the COVID outbreak in mainland China is brought under control.

The National Press and Publication Administration (NPPA) resumed handing out new game licenses on 11 April 2022, after having halted the issuance of new licenses since July 2021. The regulator published an approval list of 45 domestic titles on its website. The approval freeze lasted for about nine months, similar to the previous freeze in 2018.

While China’s two largest video game developers/publishers were noticeably absent from the latest list of approved game titles, the long-awaited resumption essentially dispelled fears about the authorities’ intentions for the video game sector. In our view, the resumption suggests that the overall online gaming industry has likely met the compliance requirements on minor protection and clean-up of game content, and potentially marks the end of the regulatory reset. Judging from what transpired in the previous regulatory cycle, it is likely that more titles will be approved in the coming months. In the last round of game approval suspension and resumption in 2018, large players were also not included in the first batch of approvals but in subsequent rounds within 1-2 months. Chart 1 shows the share price performance of the leading China game developers in the 6 months before and after the resumption of license approval in 2018. 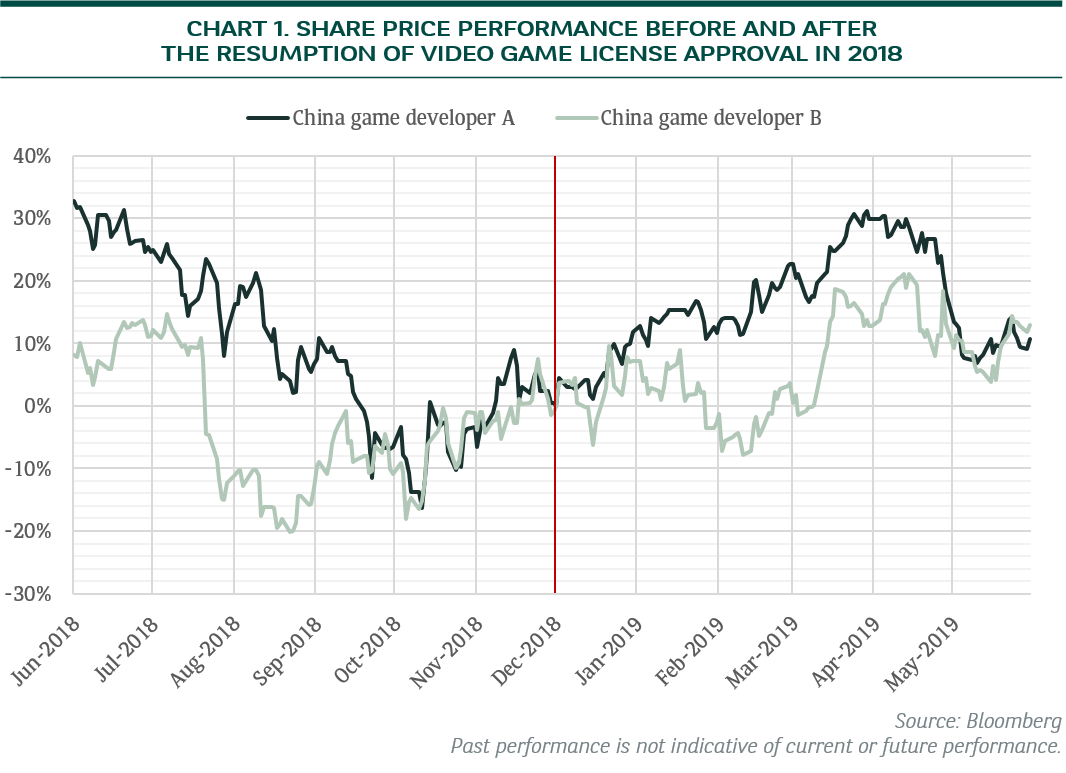 The resumption will also benefit gaming ads, with beneficiaries being video streaming platforms. Finally, this should bolster investor sentiment towards the China internet sector, as it may be interpreted that regulatory scrutiny has plateaued.

China NEV sales continued to register triple-digit volume growth and stole market share from traditional internal combustion engine (ICE) vehicles. According to the China Association of Automobile Manufacturers, unit sales of NEV passenger cars surged 140.7% yoy in Q1 2022, whereas unit sales of ICE vehicles fell by 5.4% yoy over the same period. But the share prices of NEV and ICE makers declined indistinguishably year-to-date (see Chart 2). On top of a market-wide underperformance of growth stocks in the face of sooner-than-expected tapering by central banks, investors were worried that the ongoing tight supply of auto chips and escalating cost of lithium battery could choke off NEV industry growth. However, in our view, investors underestimated premium NEV brands’ ability to pass on rising costs. We believe the China NEV sector is becoming more attractive after the share price pullbacks.

Among the leading NEV makers, we notice that shares of plug-in hybrid electric vehicle (PHEV) makers outperformed battery electric vehicle (BEV) pure plays. And among ICE makers, shares of those lagging behind in EV development outperformed those with clear ICE-to-EV transition strategies. The market showed a distaste for NEVs, despite NEV market share ratcheting up to a record high of 25.1% in March 2022, from 21.3% in December 2021 and 11.0% in March 2021. This could be explained by market fears that BEV gross margin would deteriorate rapidly due to rising battery material costs. However, we have a sense that such fears are due to ignorance of the facts that (i) higher costs are passed onto consumers, and (ii) strong NEV shipment volume growth continued after the price hikes. So far, the increase in NEV prices has not become a speed hump to the China NEV industry. Bear in mind that the key profit drivers for EV makers should be volume growth and cost efficiency gains through economies of scale. As long as the NEV makers can defend unit gross margin, we are not concerned about rising raw material costs. 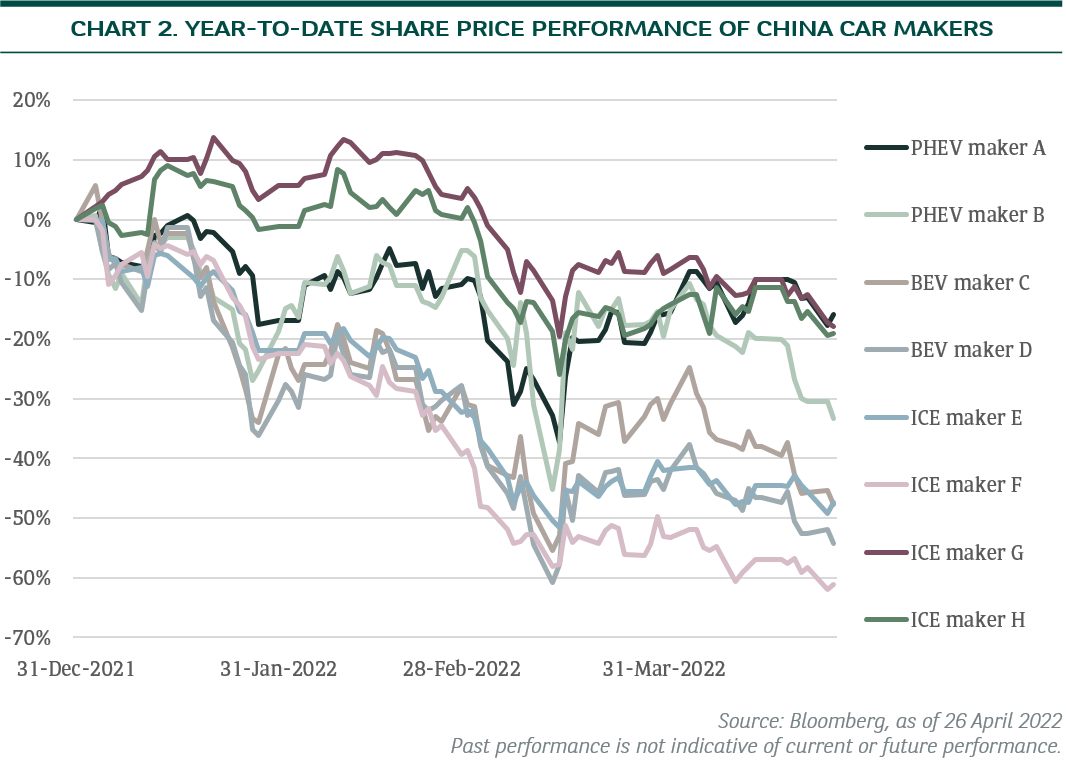 Meanwhile, the supply-chain disruption due to COVID-lockdown in Shanghai is still a near-term concern. Several car makers have resumed productions, but only to a limited scale. At the moment, visibility remains low.

In early March 2022, we were unnerved by the government’s public request that financial institutions should lower loan interest rates and cut fees. Various government bodies had reiterated the request, but nothing concrete was announced until mid-April when the State Council hinted strongly at an RRR cut, which PBoC subsequently did by 25 bps, effective 25 April. City commercial banks that had operations only in one province and rural commercial banks subject to an RRR of above 5% were entitled to an additional 25 basis point cut. After the cut, RRR for large banks stood at 11.25% (see chart 3), and midsized banks at 8.25%. RRR for small banks that had already implemented a 5% ratio remained unchanged. The cut was expected to inject RMB530 billion liquidity into the banking system. This round of RRR cut was smaller in magnitude than what the market had expected, i.e. 50 bps, which has been the norm for years. We think the seemingly cautious move by PBoC indicates the room to slash RRR is limited, as once mentioned by senior PBoC officials. It is warranted to maintain a certain level of RRR for the purpose of risk prevention. 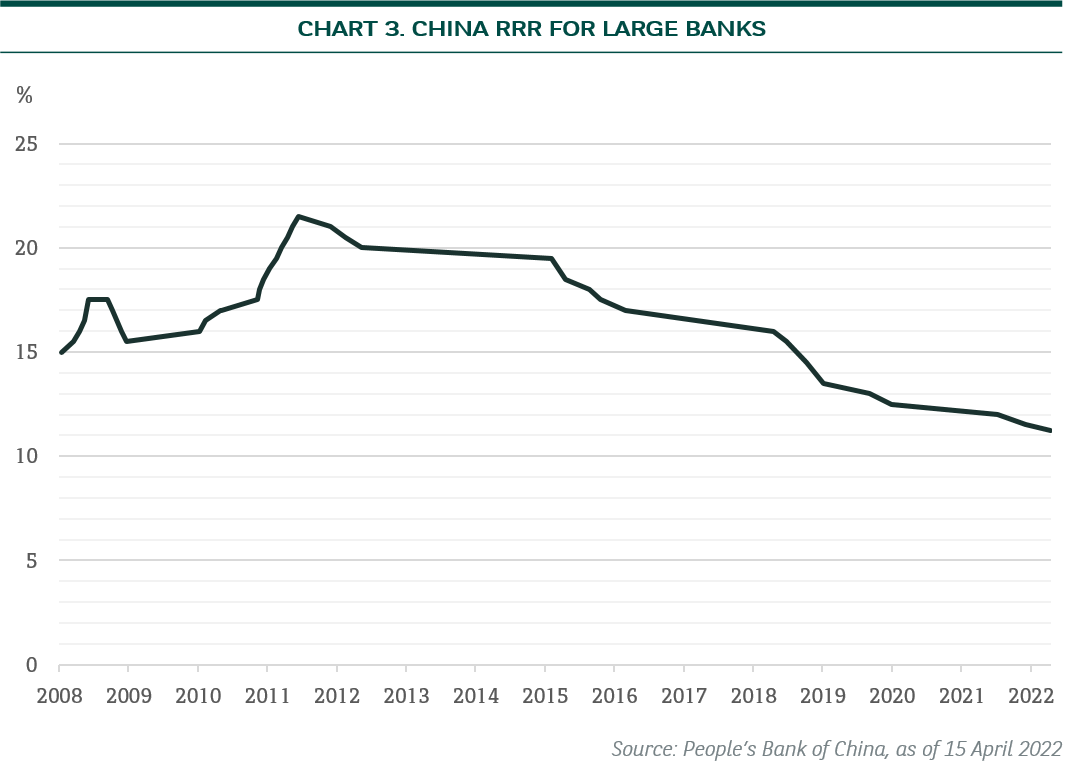 After the RRR cut, the market once expected an imminent interest rate cut, which did not materialise. Instead, PBoC and SAFE jointly published a notice on pandemic-related measures and financial services for economy development. There were 23 directives in the notice, which echoed a similar list of policies released in February 2020 to counter the initial COVID outbreak. In short, banks are encouraged to grant loan extensions and discouraged from trimming lending limits on loans. We are relieved that, unlike 2020, the notice did not contain an explicit target of profit transfer from the banking sector to the economy. On 25 April 2022, PBoC reduced foreign exchange RRR by 100 bps to 8%. However, we believe the pressure to lower interest rates is mounting day by day.

China sportswear brands registered strong sales growth in the first two months of 2022, but sales have fallen off the cliff since late-March 2022 amid lockdowns. Both offline and online sales were under pressure due to reduced traffic in shops and logistic interruption – goods were not delivered to warehouses/consumers’ hands on time. The leading sportswear makers are guiding for a far weaker Q2 2022 than Q1 2022, but remain confident in achieving double-digit sales growth in 2022. We believe the ongoing COVID-related logistic interruption, combined with a high comparison base from the cotton controversy last year, will push down the sportswear sector’s sales growth in the short term. That said, we believe the leading domestic sportswear brands can weather the challenges with solid financials and still-healthy inventory turnover as of March 2022. The long-term investment theses of (i) consumers trading up to premium quality sportswear and (ii) domestic brand preference due to national pride are still intact in our view.