On the Verge of Bold Stimulus

The threat of a synchronous global downturn may be looming, but we argue that China, more precisely China’s equity market, is about to turn the corner soon. Undisputedly, the global economy has slowed in recent months on monetary tightening, elevated energy and food prices, and weakening consumer confidence. The exceedingly weak economic data in China have added fuel to the flames.

At our recent meetings with investors, we noticed growing frustrations towards China’s economy and the downsides of its dynamic zero-COVID policy. We reckon now is the “be greedy when others are fearful” moment. In our view, it is hard to believe that the Chinese government will sit on its hands, especially before the 20th National Congress of the Chinese Communist Party in 2H22. As the government is running out of time to win this uphill battle, bold stimulus program should be launched as soon as possible. In our experience, the equity market always reacts positively to massive fiscal stimulus.

Indeed, we have seen flows of positive announcements since mid-May 2022:

i) Shanghai is exiting lockdown gradually;

iii) Vice Premier Liu He reiterated the supportive stance towards the digital and private sectors;

v) the State Council outlined 33 specific measures in six aspects to further stabilise the economy; and

vi) PBoC and China Banking and Insurance Regulatory Commission (CBIRC) urged lenders to go all out to boost loan growth.

On the Verge of Bold Stimulus

The threat of a synchronous global downturn may be looming, but we argue that China, more precisely China’s equity market, is about to turn the corner soon.

Undisputedly, the global economy has slowed in recent months on monetary tightening by major central banks, elevated energy and food prices, and weakening consumer confidence. The managing director of the International Monetary Fund (IMF), Kristalina Georgieva, warned that the global economy is facing its “biggest test since the Second World War.” The exceedingly weak economic data in China have added fuel to the flames. China’s core consumer price index (CPI) inflation slid below 1% year-on-year (yoy), housing sales shrank more than 30% year-to-date, purchasing manager’s index (PMI) nosedived to the weakest level since the peak of the first COVID wave in Wuhan in February 2020; and monthly new loan growth was less than half of what the market had expected. Economists at investment banks are busy cutting their China gross domestic product (GDP) growth forecasts further below the official target of 5.5% for 2022.

At our recent meetings with investors, we noticed growing frustrations towards China’s economy and the downsides of its “dynamic zero-COVID” policy. We agree that it is sensible to stand on the sidelines when risks are unfolding, which has been the case in the past few months, but we also reckon it is now the “be greedy when others are fearful” moment. In our view, it is hard to believe that the Chinese government will sit on its hands and let the economy free-fall, especially before the 20th National Congress of the Chinese Communist Party in the second half of 2022. We think as the government is running out of time to win this uphill battle, bold stimulus programmes should be launched as soon as possible. In our experience, the equity market always reacts positively to massive fiscal stimulus without fail.

Efforts to spur economic activities would be in vain when stringent COVID measures are in place to minimise in-person interactions. As the number of new COVID cases in Shanghai has fallen considerably with no signs of new outbreaks in other cities, the window to repair damage is opening. Indeed, we have seen flows of positive announcements since mid-May 2022:

Having said that, we do not believe there are silver bullets to rejuvenate GDP growth immediately. China’s economy may continue to gravitate towards a soft landing in the near term. The fact that most central banks in developed countries, except the Bank of Japan, are draining excess liquidity in the capital market is not helpful either. However, the equity market is a voting machine on future prospects, rather than a price maker of recent trajectories. As long as the Chinese government is still committed to its ambitious GDP growth target, we believe its equity market is tilted to the upside. Nonetheless, China equities and other equity markets have shown weak correlations over the years (see Chart 1). We recommend investors to opportunistically accumulate high-quality H-shares and A-shares, when the global market is likely to be choppy. 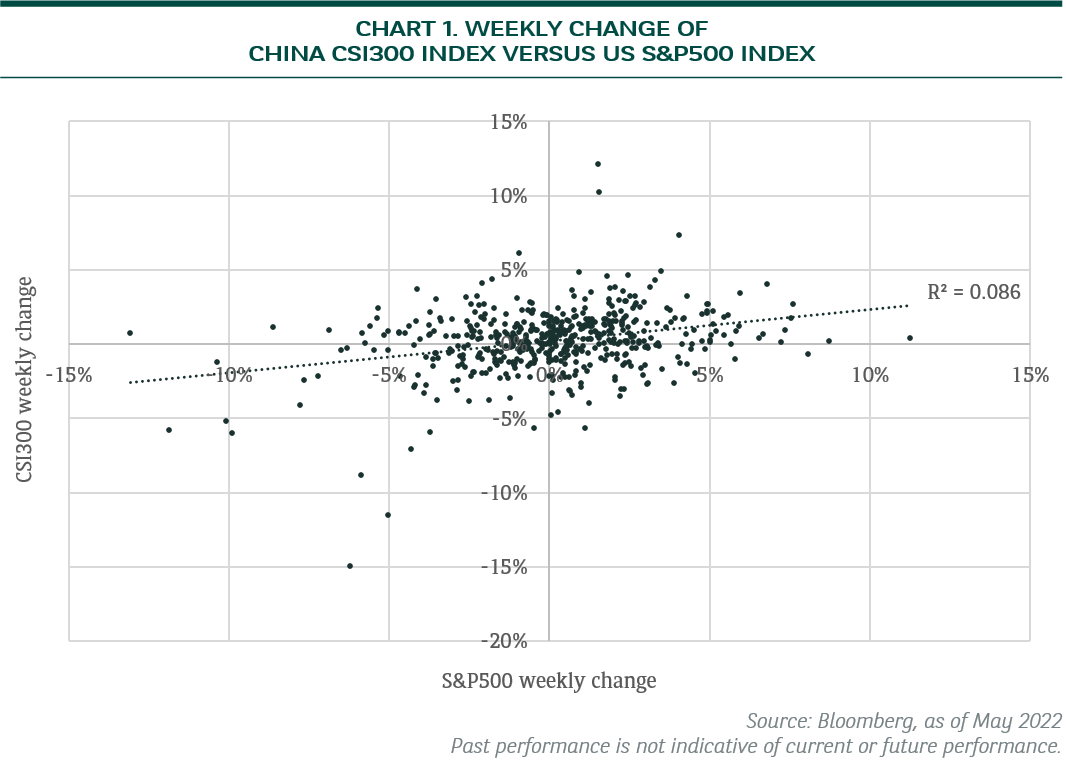 We expect an imminent infrastructure boom will be one of the major tools to reflate China’s economy, which bodes well for the public construction sector.

At central government meetings in early May 2022, President Xi called for an “all-out” effort to develop infrastructure. A large array of infrastructure projects, including waterways, water supply and sewerage, smart grids, cloud computing and artificial intelligence, airports and railways were highlighted. Various state media suggested that the country may accelerate issuance of special-purpose bonds to aid the economy. According to the Ministry of Finance (MOF), local governments issued RMB200 billion worth of special-purpose bonds in April, even though overall bond issuance hit a speed bump due to the resurgence of COVID in Shanghai, Beijing, Jilin and other cities. Between January and April 2022, RMB1.65 trillion worth of special-purpose bonds were issued, amounting to 45% of the RMB3.65 trillion issuance quota for 2022.

In fact, the idea of boosting economic growth through infrastructure investment has been on Beijing’s plate since December 2021, but the implementation was probably interrupted by a country-wide COVID outbreak since late-March 2022 (see Chart 2). 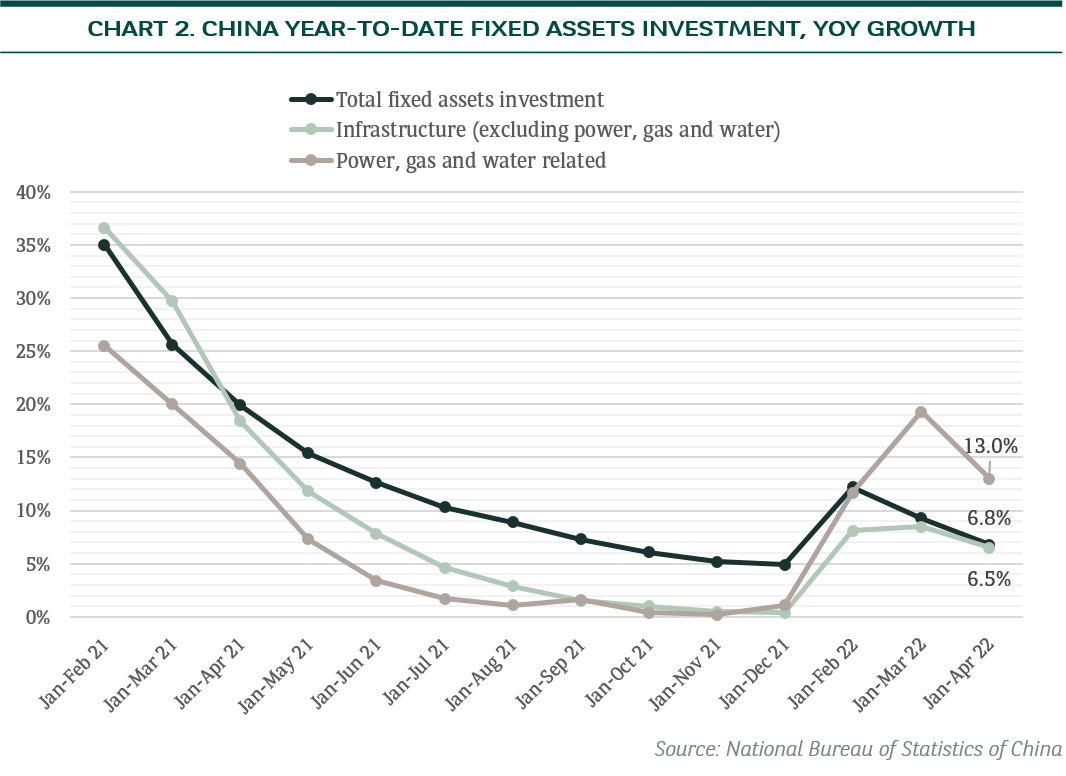 Now as COVID outbreaks have been contained in major cities, we believe the government is eager to jump-start the economy by cranking up infrastructure investments. We expect construction service companies and equipment makers to bulk up their order backlogs in the coming quarters. Steel mills and utilities may also benefit from favourable policies that encourage construction of new capacity.

In our view, the supply-demand dynamics of the steel industry is becoming particularly interesting. China’s total steel production capacity has been on a downward slope due to tightening carbon dioxide emission regulations. In April 2022, the National Development and Reform Commission (NDRC) and Ministry of Industry and Information Technology (MIIT) jointly announced that China should continue to reduce crude steel output in 2022. Meanwhile, iron ore prices have dropped significantly since the last peak in mid-2021 (see Chart 3) due to high inventory levels. On the other hand, infrastructure constructions should bolster demand for steel bars. We think the compulsory shutdown of inefficient steel mills owned by small operators, iron ore prices and benign steel bar demand are supportive to gross margin expansion for the China steel industry. 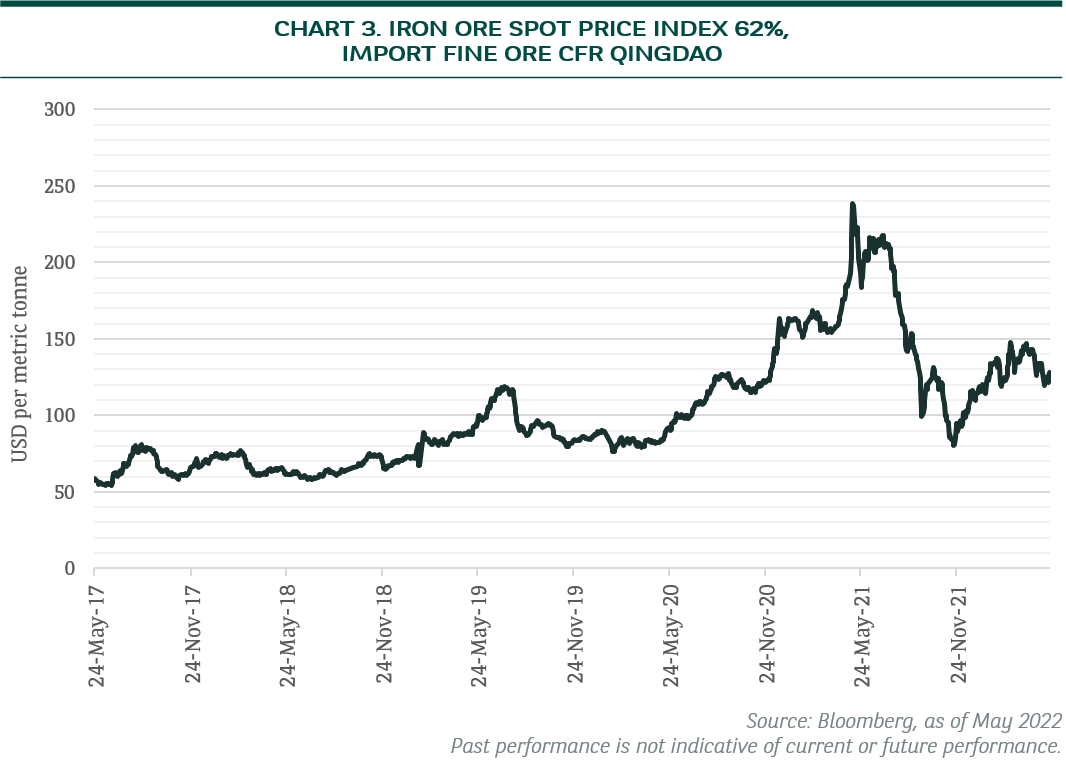 In mid-May 2022, the state-owned China Securities Journal reported that a new round of car purchase subsidies could be launched in early June. Cars, including both new energy vehicles (NEV) and internal combustion engine vehicles (ICE), with a price tag below RMB150,000 will be eligible to a subsidy between RMB3,000-5,000 per vehicle. It is estimated that this round of subsidies will boost NEV sales by 300,000-500,000 units and ICE sales by 200,000-300,000 units. According to the China Passenger Car Association, 20 million units of passenger cars, comprised of 3 million units of NEV and 17 million of ICE, were sold in China in 2021.

The latest COVID outbreak had hit the China auto industry badly. Many carmakers were forced to reduce production because they were not able to source sufficient semiconductors and other components from suppliers. The China Automobile Dealers Association said the inventory of auto dealers were at relatively high levels in April 2022, and expected that inventory levels would not normalise in May in spite of improving auto sales.

In our opinion, it is an excellent timing for launching car purchase subsidies and tax cuts  to kill three birds with one stone:

(ii) to help auto dealers clean up excess inventory, and

(iii) to encourage carmakers to resume production as soon as possible.

The auto industry has a long supply chain such that higher auto sales would cascade down to many other segments of the economy, including basic materials, machine tools & robots, auto financing and insurance, etc. In April 2022, China’s total passenger vehicle shipment fell off the cliff (see Chart 4), decreasing by 40% yoy and 46% month-on-month. 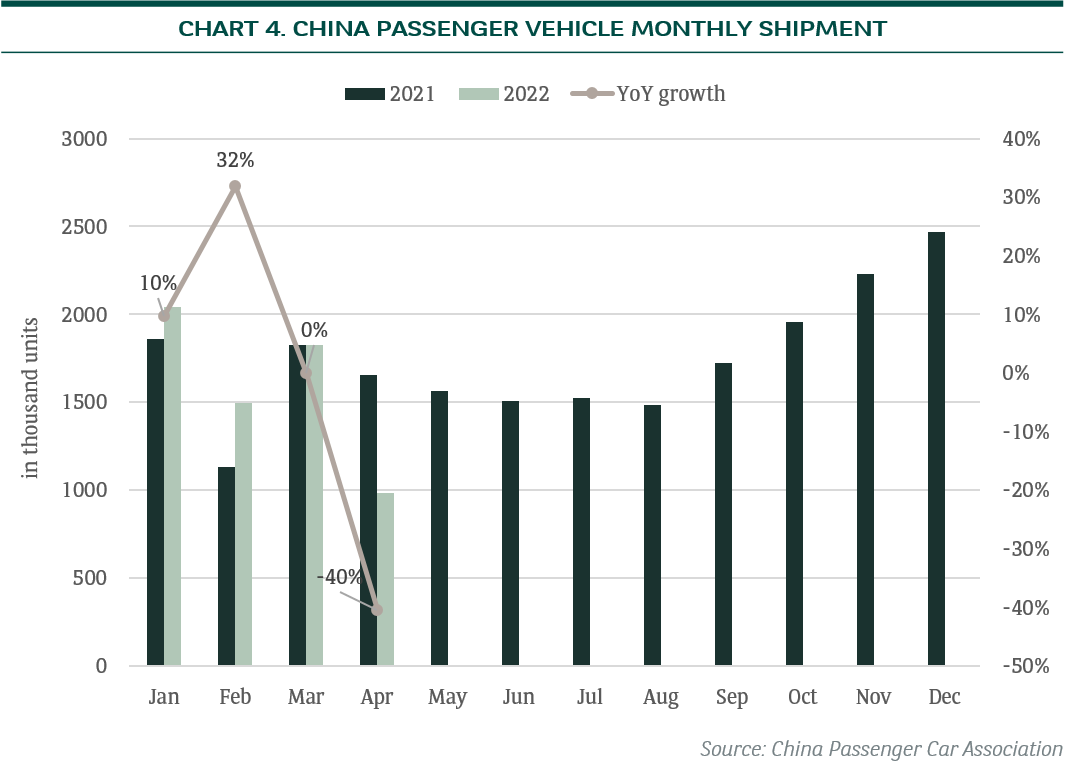 Most of the leading China internet & e-commerce companies had reported 1Q22 results at the end of May 2022. Broadly speaking, China internet & e-commerce companies were able to uphold revenues on a yoy basis against a stricken macro environment. Another positive takeaway in common was that they managed to mitigate lockdown disruptions through cost control. Looking ahead, the COVID situation remains fluid and continues to cast uncertainty over 2Q22 earnings. However, our general impression after the result conference calls is that companies’ management are cautiously optimistic about an improving business environment for the rest of 2022.

For the online game business, the two industry leaders are planning to narrow down their game development into fewer but higher quality titles. Despite the National Press and Publication Administration (NPPA) resuming new game approval, which is a positive sign in revitalising the industry, the industry insiders commented that the game approval process is still under stringent scrutiny. They expect the new approval lists will be more limited as compared with the period before the suspension in July 2021.

As for e-commerce, the Omicron-variant outbreak has impacted more cities and consumers compared to the initial outbreak in 2020. There was also higher strain on the supply chain, resulting in order cancellation spike in April and May 2022. On a positive note, things are gradually normalising (ex-Shanghai) into May. Platforms with strength in logistics are able to gain market share.

Stars Aligning in the Year of the Rabbit - HK China Equities