Is China Running Out Of "Chips"?
YOUR WEALTH
HAS A VOICE.
LET IT BE HEARD.

Is China Running Out of “Chips”? 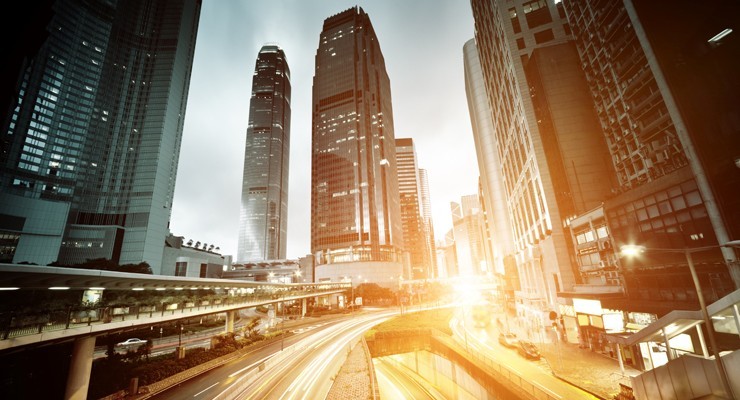 China is Rebooting While the Western World has Halted

Thanks to the stringent quarantine measures undertaken by the Chinese government, China has been recovering ahead of its western peers. On 24 March 2020, the central government has approved to end the lockdown for Wuhan (the epicenter of COVID-19 outbreak in China), and lifting travel curbs for other parts of Hubei on 25 March 2020.

In Wuhan, local authorities are also allowing real estate companies to resume operation in batches, and the Wuhan branch of ICBC has agreed to offer no less than RMB 100 billion to help enterprises resume operation.

In short, manufacturing and commercial activities are resuming gradually and in a controlled manner. Coal power consumption has reached 75% of January 2020 level while national work resumption rate has already risen to above 70% in February 2020. (Diagram 1) 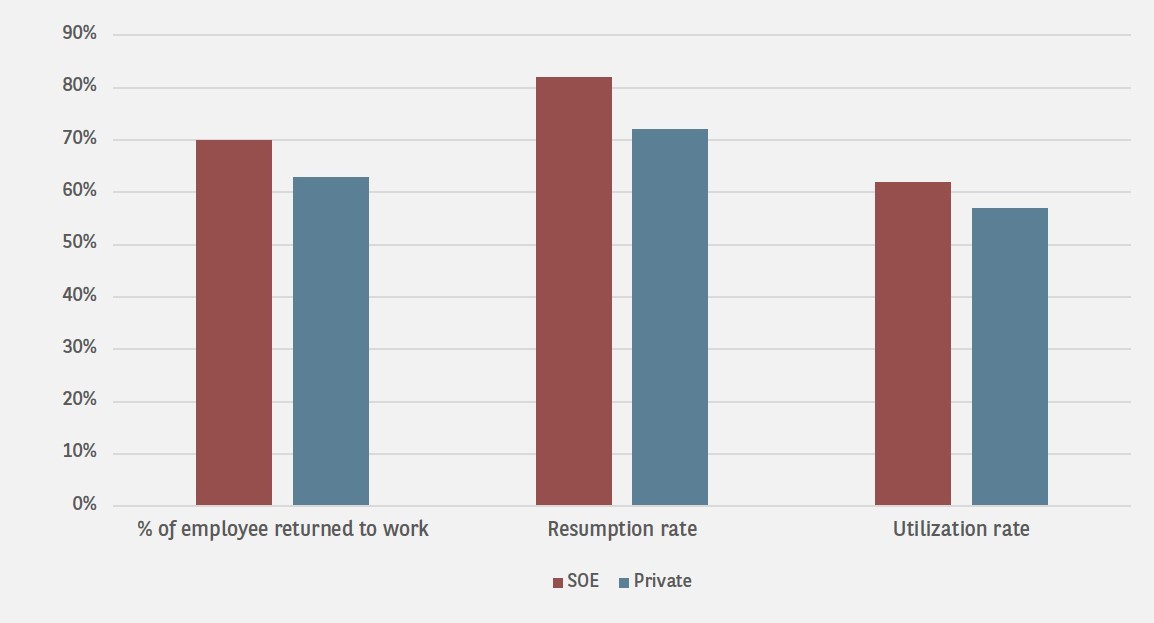 Source: China Enterprise Confederation Note: For top 500 manufacturers The above chart is for reference only and does not represent current or future performance.

Consumption Sector Recovery May Lag the Industrial and Commercial Sectors

Nevertheless, movie theatre’s box office and dine-out ratio are still very low, which suggests that people are still worried about the virus spread. More importantly, many workers have lost 2-3 months of income and are struggling with financial difficulties, so they prefer to save than spend now.

We expect balance sheet of the general working class takes time to repair, and the risk of more consumer loan default is on the rise, especially with the P2P online platforms. Thus, full recovery of overall consumption sector will take much longer time than the commercial and industrial sectors. This would be a short-term negative to consumer discretionary sector in particular.

Economic Damage is Yet to Be Seen. Downside Risk to Full Year GDP Growth

On the macro-economic front, China Q1 GDP growth will inevitably suffer. For the first two months combined, major indicators of China fell by more than 13% year-on-year (YoY), with industrial value-added tanked by 13.5% YoY, fixed asset investment by 24.5% YoY and retail sales by 20.5% YoY.

Property and auto sales, arguably the two biggest economic sectors in the country, fell by more than 40% YoY. Some analysts started to revise down their FY2020 China GDP growth forecast from around 6% to  around 2.5%. The most bearish ones even expect there is a chance of China reporting negative GDP growth in 2020.

Whether this will come true largely depends on the shape and strength of the recovery – i.e. V-shape, W-shape, U-shape, or in worst case L-shape. Recently released Purchasing Managers' Index (PMI) of 52 in March (from 32.7 in February 2020) suggests industrial activities are back to expansionary phrase (above 50), which is an encouraging signal in our opinion.

Still Plenty of "Chips" on Hand

On the fiscal front, China could follow the examples set by the US with USD2 trillion stimulus package to support lending and consumption activities; it could also revive the Pledged Supplementary Lending (PSL) which facilitate lending to select infrastructure projects (which was used to stimulate economic growth in 2015 slowdown).

Its huge financial and foreign exchange reserve accumulated throughout the years allows it to take a more aggressive fiscal policy. On the monetary front, solid balance sheet of Chinese banks and the China’s financial system stability also gives People’s Bank of China (PBOC) much higher flexibility in applying various monetary tools, such as cutting interest rates and/ or reserve requirement ratio.

We also expect industry-specific support policy to be launched successively on the strategically important sectors, such as auto, consumption and property.

Although China will step out from the virus-induced crisis very shortly, it is, however, now facing two key structural challenges:

2. Long-term challenge – Maintaining its role as The World Factory

Signing of ‘phase one’ Sino-US trade deal (Diagram 2) in mid-January 2020 was originally regarded as lights at the end of the tunnel. The pandemic outbreak, however, has significantly complicated the ‘phrase two’ trade negotiation, especially ahead of the US Presidential Election in November 2020. 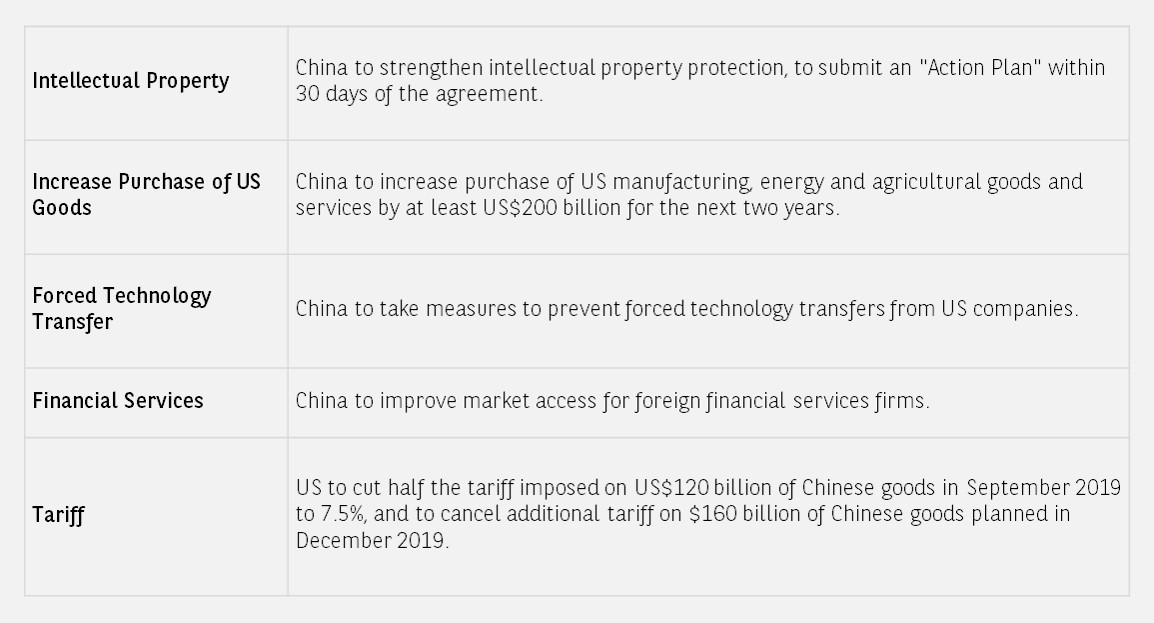 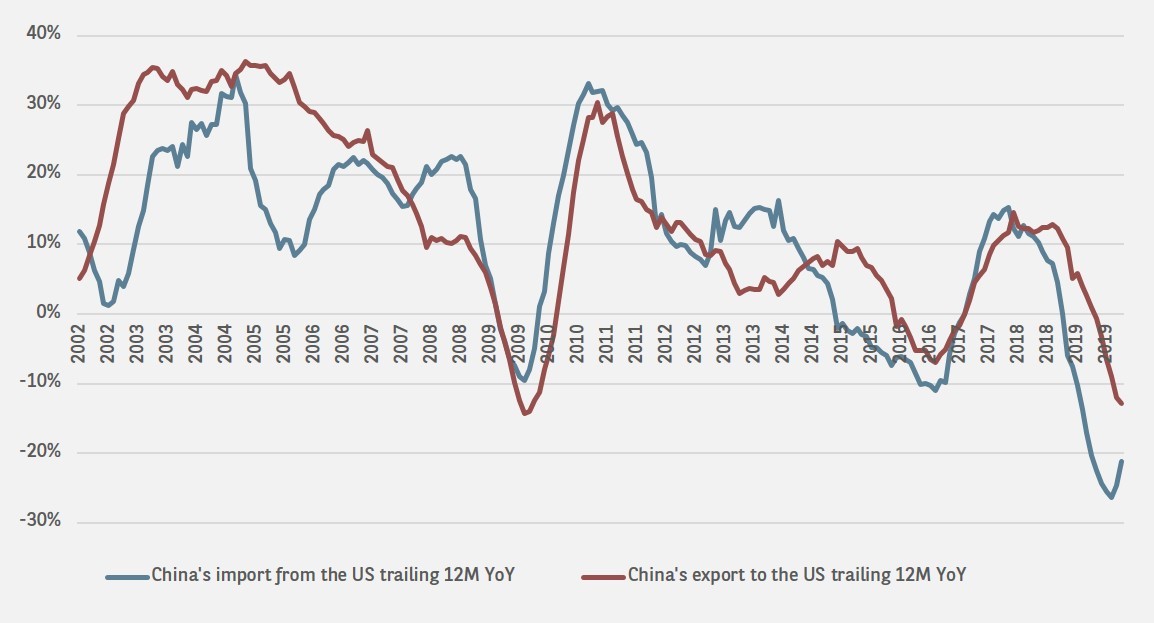 Source: Wind, Bloomberg, as of 1st April 2020. The above chart is for reference only and does not represent current or future performance.

On the one hand, mutual trust and goodwill between American and Chinese people has been significantly undermined. Faith in Chinese government from general Chinese has grown, as the Central government has quickly and successfully brought COVID-19 under control (compared to the Western countries).

At end-March 2020, number of infected cases in Italy and the US has already surpassed China. In the US, some politicians have blamed China’s information censorship and lack of transparency as the root of the pandemic outbreak. The spread of anti-China sentiment would definitely give President Trump more support to be even harsher on the trade deal.

On the other hand, the recent lockdown measures have put the execution of ‘phrase one’ trade deal at risk. China’s industrial and consumer demand has weakened significantly in Q1 2020, which makes it difficult to honour the agreed amount (especially on energy, agricultural and aerospace products) under ‘phrase one’ trade deal. Lockdown induced supply disruption locally may also make the US technically infeasible to deliver even if they want to.

Global supply chain has been severely interrupted in the past one year due to the Sino-US trade war. Adding salt to that, lockdown of China, and subsequently most of the Western World, has almost put a complete halt to the global supply chain.

Combined effect of the trade war and the pandemic has exposed the weakness of a global supplier chain, especially on critical components. We expect localisation trend to accelerate post COVID-19.

We also expect more international manufacturers to relocate part of their production base from China to their home country (i.e. reshoring), and/ or to other developing countries like Vietnam and Cambodia. Significant technology advancement in recent years, in particular in industrial automation, has lowered the cost of production in the developed countries.

The rise of ESG (Environmental, social and corporate governance) requirement also gave the listed companies a legitimate reason to move out from developing countries like China (which are generally believed to be less ESG compliant).

However, this process may not happen immediately as most companies’ cash flow and balance sheet have been severely damaged in the pandemic. Large-scale new capital expenditure plan seems unlikely in the near term. In the long run, this will reshape the world’s economic landscape and possibly reverse the secular deflationary trend as cost of production escalates.

To combat this de-globalisation trend, China needs to accelerate the country’s value-chain upgrade in technology sector, especially on critical tech components, to reduce its reliance on the strategically important equipment/weapons.

As China’s research and development capability gets mature, one should not be surprised to see China as a net exporter of hi-tech components (see Diagram 4).

China’s leading position in 5G currently sets a good example for other Chinese companies to replicate this model to other technology area, such as electric value or artificial intelligence. In the medium-term, Chinese government also needs to give a harder push on China’s overall consumption upgrade. 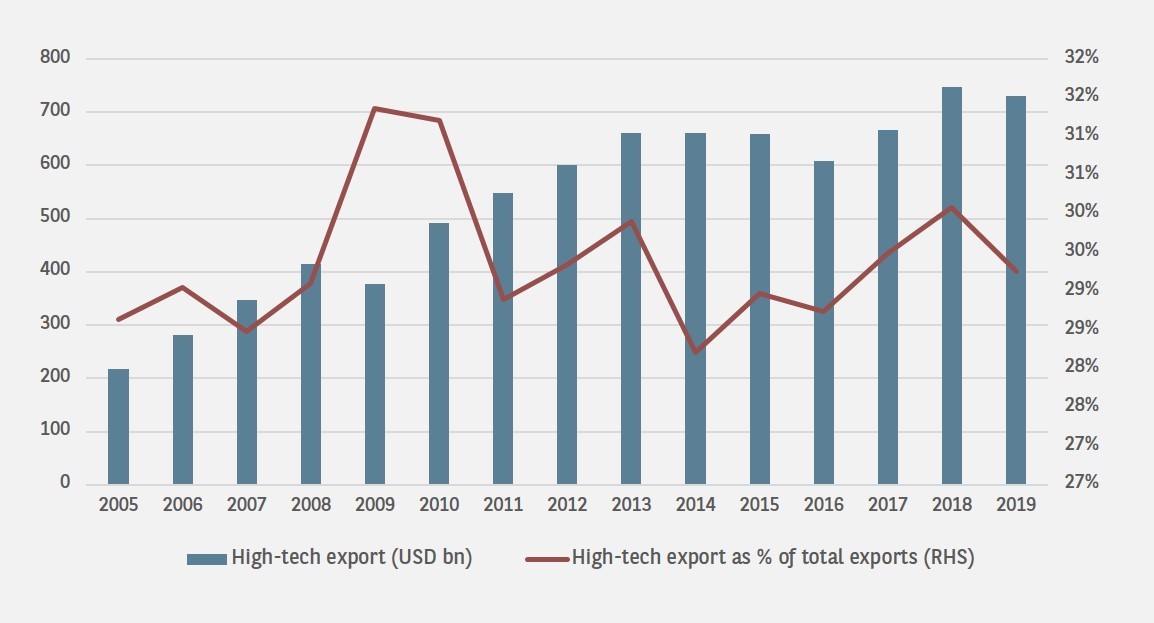 DIAGRAM 4: CHINA’S HIGH-TECH EXPORT IS EXPECTED TO GROW IN THE LONG RUN

Source: Bloomberg, As of 1 April 2020 The above chart is for reference only and does not represent current or future performance.

Chinese Banks are a Good Source of Funding

Based on PBOC’s stress test, assuming a linear correlation between gross non-performing loan (NPL) formation and decline in GDP growth, each 10% slowdown in real GDP growth would lead to an increase in the NPL ratio of 1.7%. We expect COVID-19 outbreak will lead to a spike in NPL in the banking system, putting banks’ earnings at risk in both 2020 and 2021.

As such, we think unloading Chinese banks on market rebound is a way to raise cash level as Chinese banks’ loan quality, net interest margin and earnings outlook are all worsening alongside with a significant slowdown in China GDP. When the equity market rebounds, Chinese banks are also expected to underperform the overall market, especially the new economy stocks.