Hong Kong China Stock Market December 2019
YOUR WEALTH
HAS A VOICE.
LET IT BE HEARD.

The Hong Kong equity market exhibited strong resilience despite the on-going social unrest. Indeed, in November, the market had been more reactive to global macro news than domestic political issues.

With investors’ sentiment improved post Hong Kong District Council elections, as well as liquidity being released after Alibaba’s mega-size IPO in Hong Kong, we stay positive about the market momentum towards the end of the year.

In our view, the two biggest factors that are dictating HK/China market performances are:

Over the last six months, investors have well experienced the chronicle changes in sentiment towards whether a trade deal, no matter it would just be a partial or “Phase One” agreement, could be reached.

We are a little surprised by how these news continue to have significant impact on market performance, but they do (see diagram 1).

Looking ahead, even though a deal may not be signed in the near-term, we believe the trade tension between the two largest economies of the world is unlikely to escalate from here.

From the US perspective, the increasingly hostile domestic political environment may lead to a potential impeachment process, it would be unwise for President Trump to poke the economy and the stock market in the election year, which their strong performances are apparently his biggest achievement so far.

From the China perspective, given the slowing economy, it is well reported that China demands to lower existing tariff and a confirmation from the US that there will be no new tariffs, as pre-requisite conditions for a trade agreement. 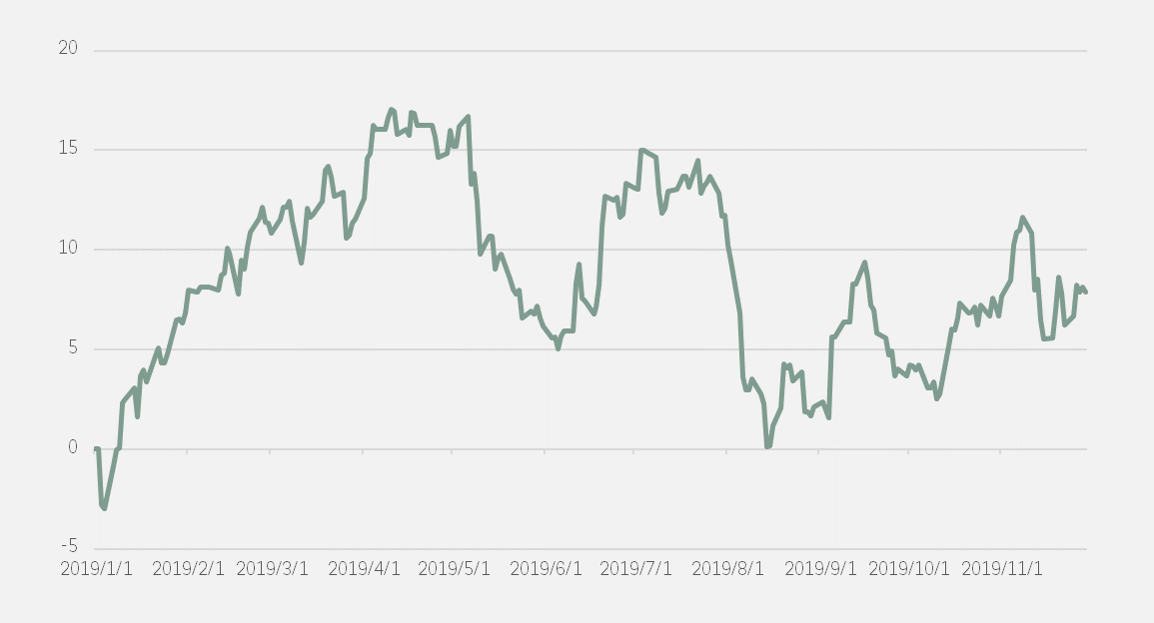 On the other hand, we will pay close attention the annual Central Economic Work Conference, an annual meeting to be held in late December 2019, which will set the national agenda for next year’s economic and financial policies.

In our view, if a partial trade deal can be reached, the Chinese government will be able to return focus to SOE reforms, particularly through mixed-ownership to improve their efficiency. 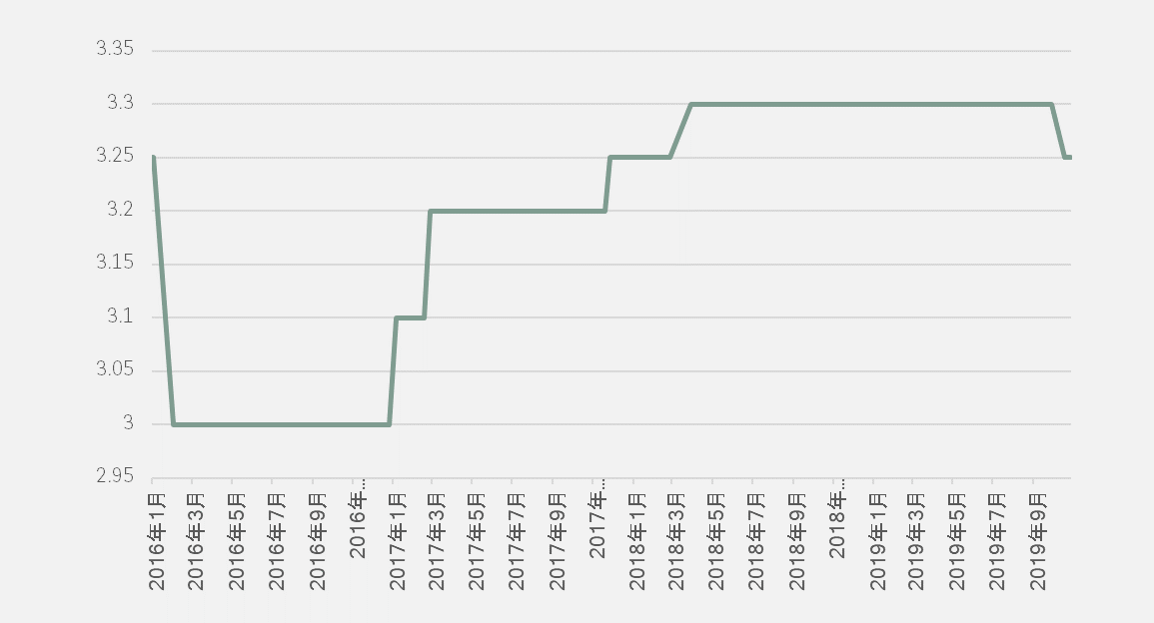 Another key supporting factor to the Hong Kong equity market is the strengthening RMB. With the increasing representation of Chinese companies, the Hang Seng Index exhibits a high correlation with RMB/ USD exchange rates (see diagram 3). 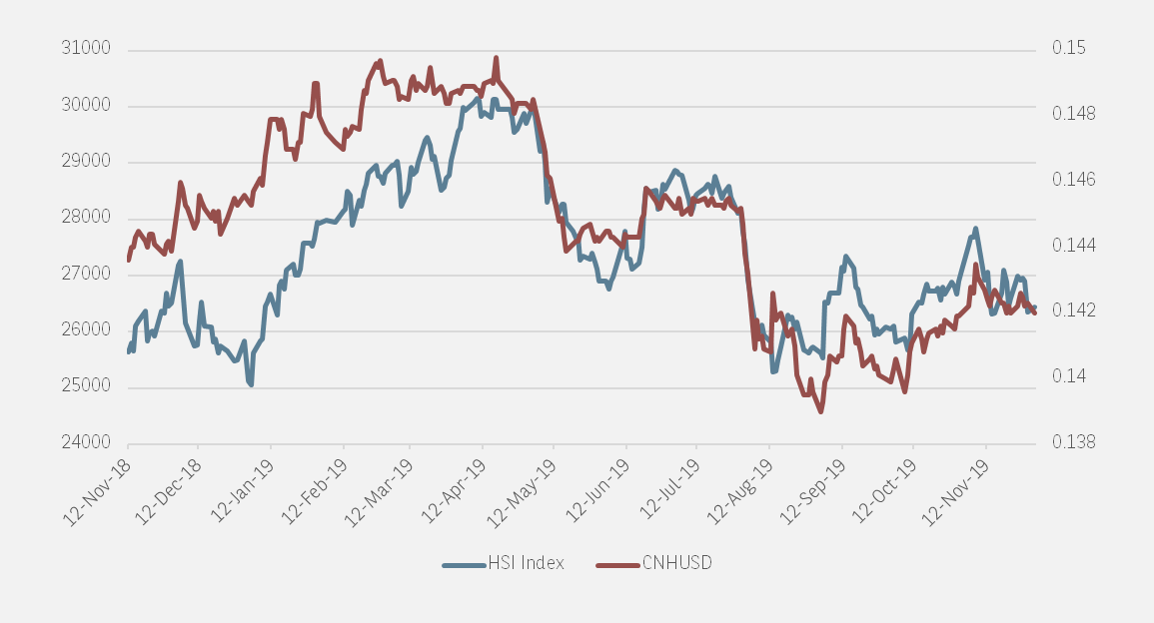 Our CIO anticipates there will be two more rate cut by the US Fed in 2020.

Even though we also see potentials for China to reduce LPR as previously discussed, the magnitude of rate cut will not be symmetric, which should provide some supports to the RMB/USD exchange rates.

On the other hand, since September 2019 when RMB started to strengthen against the US dollar, we observed accelerated inflow from Chinese investors into the Hong Kong equity market through the Stock Connect program (see diagram 4) .

Despite the slow start of the year and a short period of outflow in April and May, 2019 may set a record of year in terms of achieving the highest net inflow through Stock Connect program if the current trend sustains. 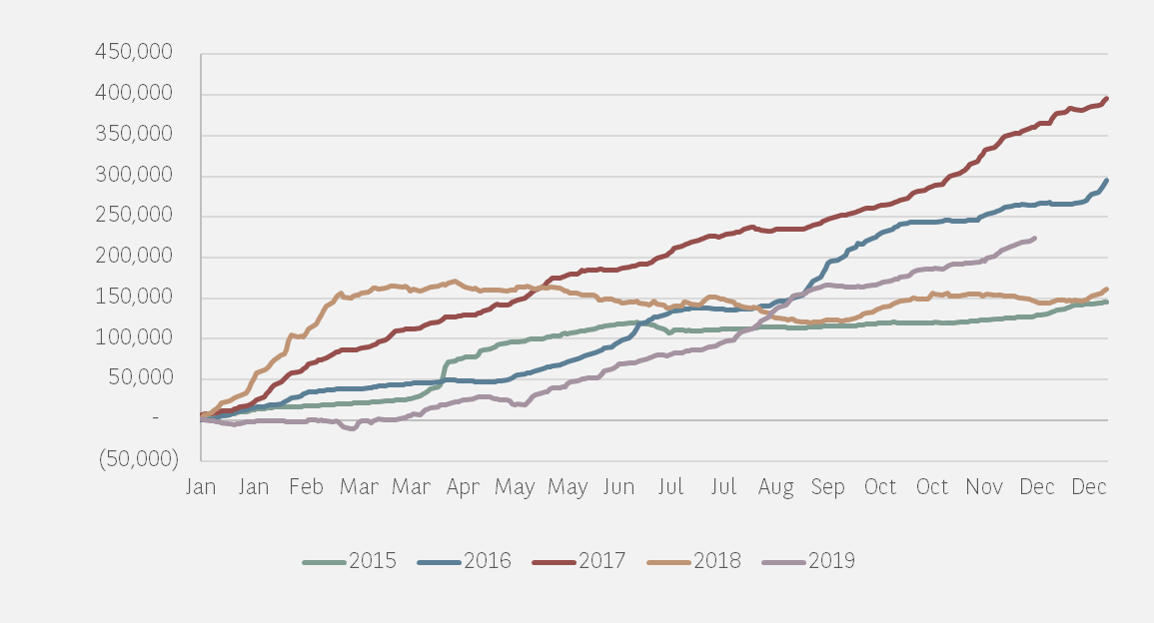 “Given the improved investor sentiment, supported by a strengthening RMB, a potential partial trade deal between China and the US, and likely more pro-growth economic and financial policies from China, we are confident that the trend for similarity of market patterns between 2011-12 and 2018-19 will continue and point to a potential year-end rally.” added Gabriel Chan, Head of Investment Services, Hong Kong. 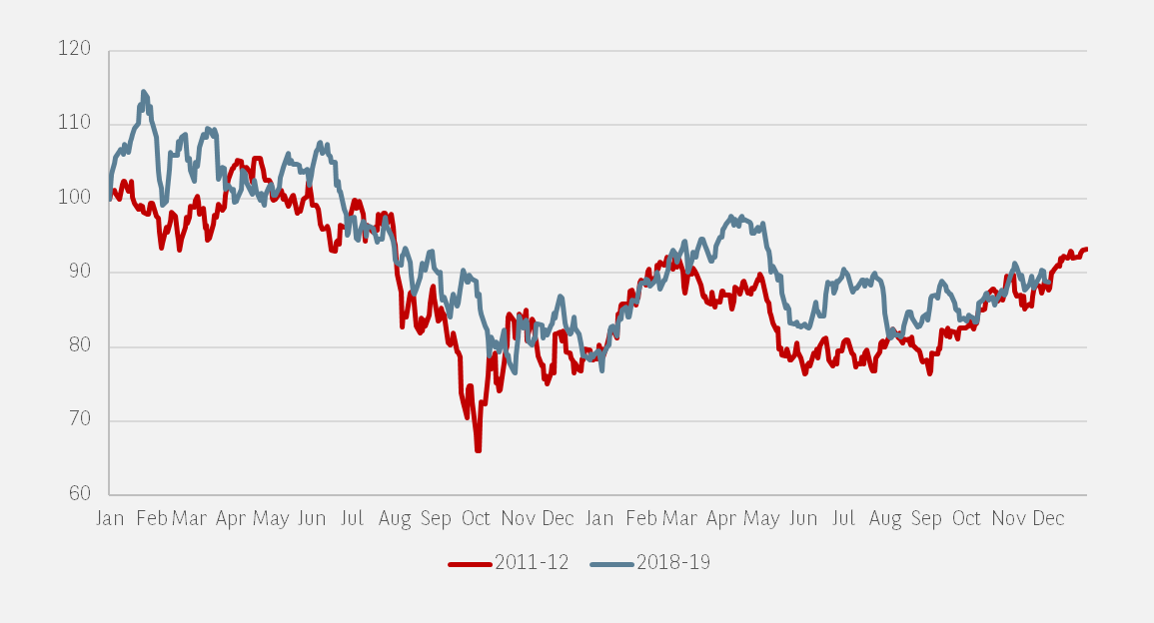 Source: BNP Paribas, Bloomberg, as of 2 December 2019 The above chart is for reference only and does not represent current or future performance.