Hong China Stock Market February 2020
YOUR WEALTH
HAS A VOICE.
LET IT BE HEARD.

Finding The Elephant Cubs in The Room

A Fruitful Start in January

In January, HK China market initially came under pressure after a US drone killed an Iranian general.  It then rebounded later in the week as Iran’s retaliation was weaker-than-feared and risk of a war subsided.

On the other hand, China said to promote the conversion of household savings into long-term capital market fund and confirmed that Liu He’s trip to Washington on 13-15 January 2020 to sign Phase 1 deal. Both helped improve the market sentiment.

Week of 20 January 2020 was the largest A share lockup expiry of RMB300 billon (bn) (v.s. RMB96.1 billion  a week before), which is 8% of the full year. Shares supply will be under pressure but liquidity remains abundant, thus expecting limited impact to the market.

Expectation for weak recovery will likely be enhanced and inventory cycle switch to restocking as supported by December 2019 data and producer price index (PPI).

February 2020 will be another testing point to watch out for. Foreigners’ interests in A share remain robust. This is evidenced by the RMB165 billion of A-shares being bought by the northbound Stock Connects in the December quarter, which is a record high since the stock programs began (Diagram 1 & 2). 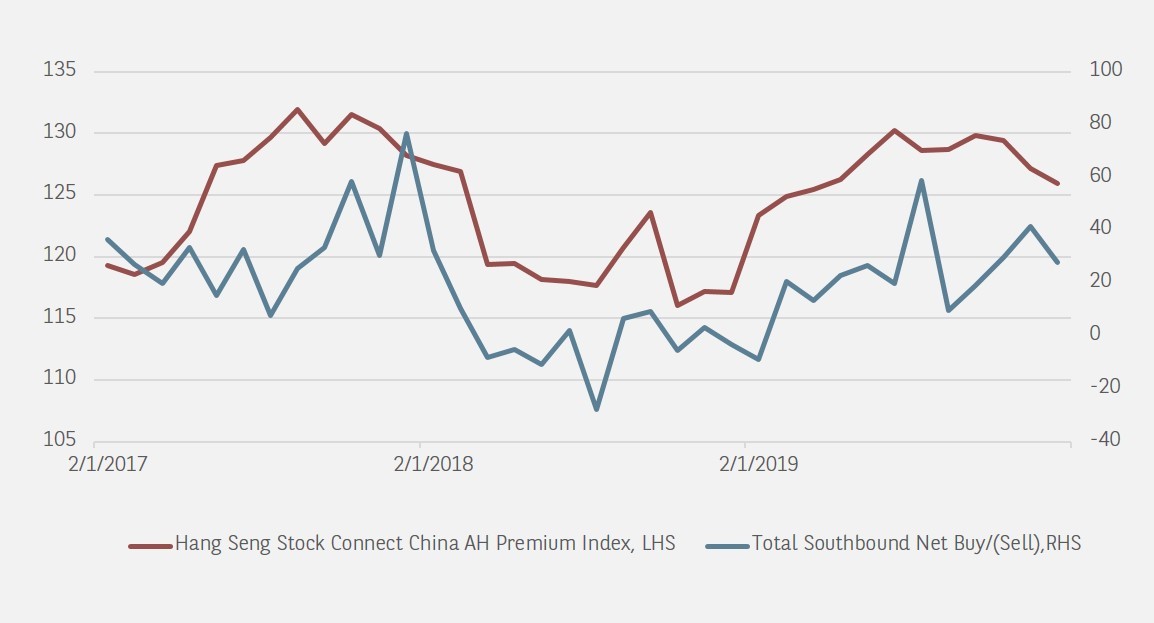 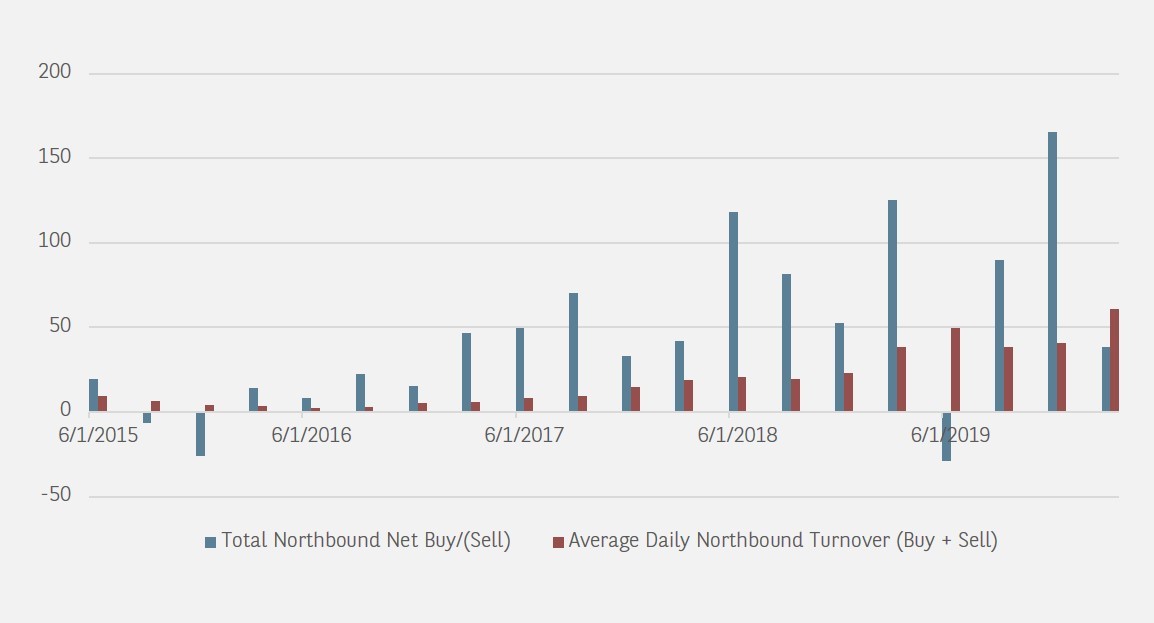 Source: BNP Paribas (WM), Bloomberg, as of 31 January 2020 The above charts are for reference only and does not represent current or future performance.

Looking into 2020, we expect positive foreign investment sentiment towards A share to persist, backed by rising A share inclusion in MSCI, FTSE and S&P Dow Jones emerging market stock indices.

An Opportune Phase One Deal

In regard to the US China Trade talk (Diagram 3), in the Phase 1 deal, China agreed to buy USD200 billion extra American goods & services in 2020-2021 from the 2017 level. China also said it will not increase annual import quotas farm products.

The US said that China no longer a currency manipulator. US President Donald Trump said Phase 2 could happen after the US presidential election in November 2020. However, the US remains defensive on 5G development, as it pressed Dutch to cancel chip-equipment sale to China on top of all trade agreements thus far. 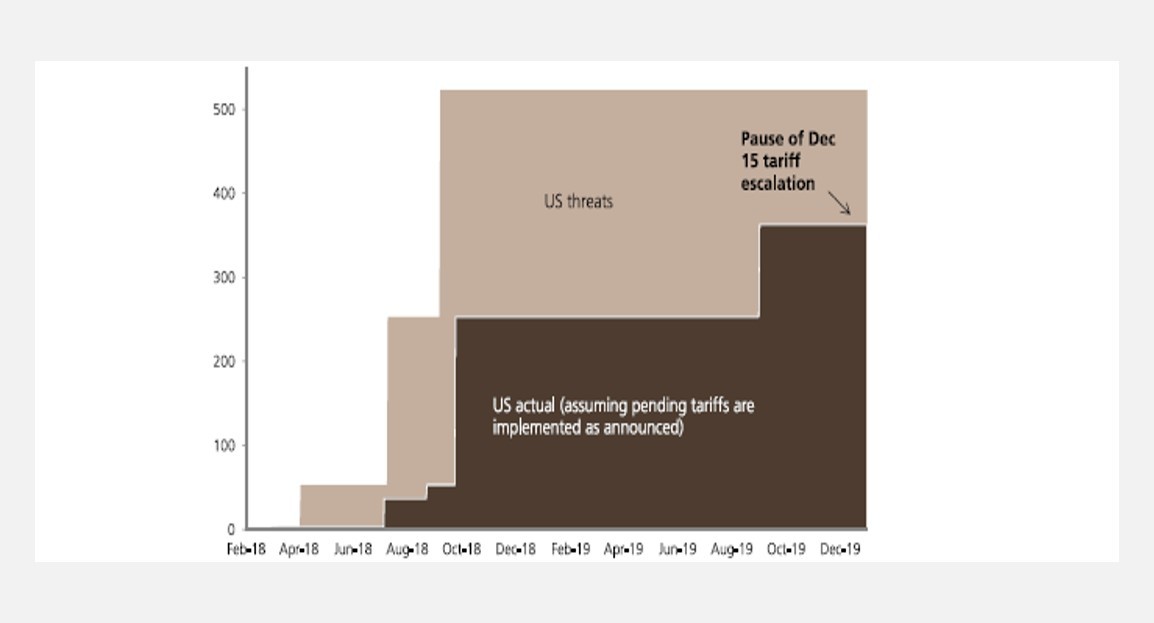 Source: UBS. The above chart is for reference only and does not represent current or future performance.

Pre-emptive Move of the PBOC

On the macro front, on an adjusted basis, GDP growth picked up to 6.1% Quarter-on-Quarter (QoQ) annualised in 4Q from 5.7% QoQ annualised in 3Q. Headline Industrial Production growth rose visibly to 6.9% in December, from 6.2% in November 2019, thanks to the recovery of export-oriented sectors and some of the cyclical industries.

The Loan Prime Rate (LPR) decision in January 2020 (unchanged at 4.15%) was a slight disappointment compared with market expectations of a 5bp cut (Diagram 4). Such PBOC inaction on the LPR perspective could be due to the fact that economic data have shown signs of stabilisation since mid-November.  Consequently, interbank liquidity has remained largely stable ahead of the Chinese New Year (CNY) holiday.

Meanwhile, local government bond issuance expanded notably Year-on-Year (YoY) in early-2020. Overall speaking, monetary policy stance remains pro-growth at this juncture. In terms of timing, the pace of LPR cuts depends on the domestic cyclical recovery and inflation trajectory, as well as the timing and magnitude of the Fed’s rate cuts this year.

Our CIO Office expects the US Federal Reserve (Fed) to stay put on monetary policy this year. This is, though, different to general market consensus, which expects the Fed to cut rate in 1H 2020, and the time window for evaluating the effectiveness of domestic growth-stabilisation policies also lies in 1H. 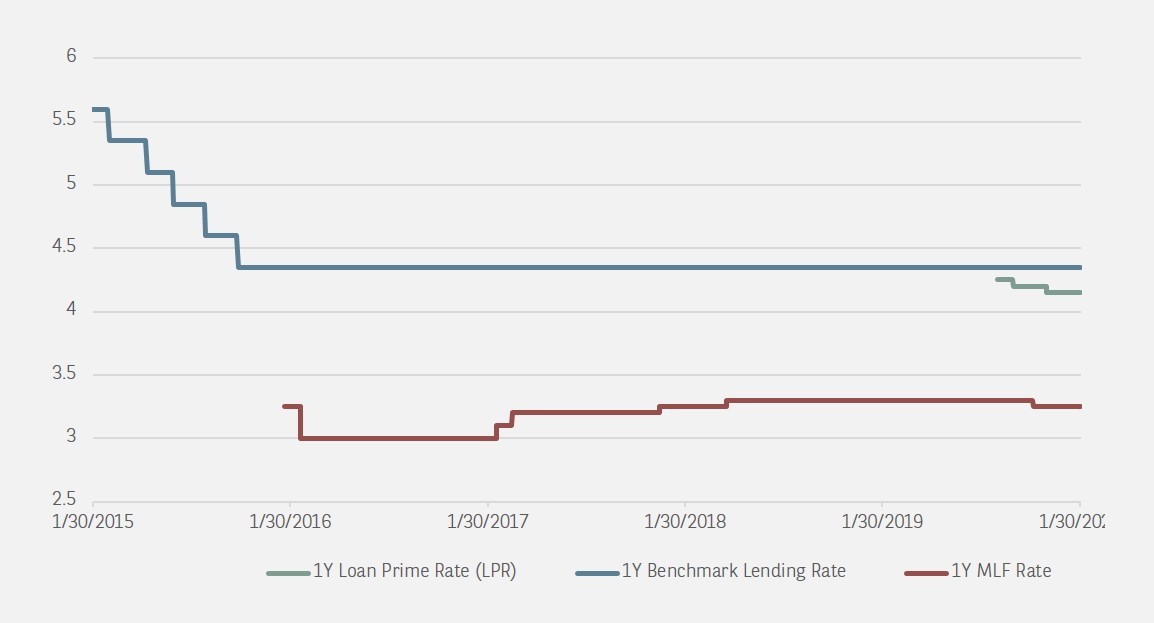 Source: Bloomberg, as of 31 January 2020. The above chart is for reference only and does not represent current or future performance.

The Wuhan Abattoir Has Turned Market Sentiment Upside Down

HK China market sentiment turned negative swiftly on 20 January 2020 on China coronavirus outbreak. SARS had a sharp but only transitory impact on China’s economic growth in 2003. The virus did not dent GDP growth, which rose from 9.1% in 2002 to 10.0% in 2003 and 10.1% in 2004, thanks to aggressive policy easing by Beijing (Diagram 5 & 6). This time we expect similar policy stance to happen.

This is because the policy goal of doubling real GDP growth this year from 2010 has been highly emphasised by the Central government and GDP needs to grow by 6% this year in order to achieve this.

The Purchasing Managers’ Index (PMIs) are usually valued as being among one of the first pieces of data released for an economy each month. But China’s PMI surveys have been taken by subsequent events.

The PMI surveys ended on 20 January 2020, the same day that Xi Jinping publicly stated that the virus outbreak was “serious”.  The official manufacturing PMI fell from 50.2 in December 2019 to 50.0 in January 2020.

One interesting trend we observed is the construction PMI, which jumped from 56.7 to 59.7, hinting that local governments have been quick to break ground on infrastructure projects in the Chinese New Year despite the virus outbreak has emerged quickly. 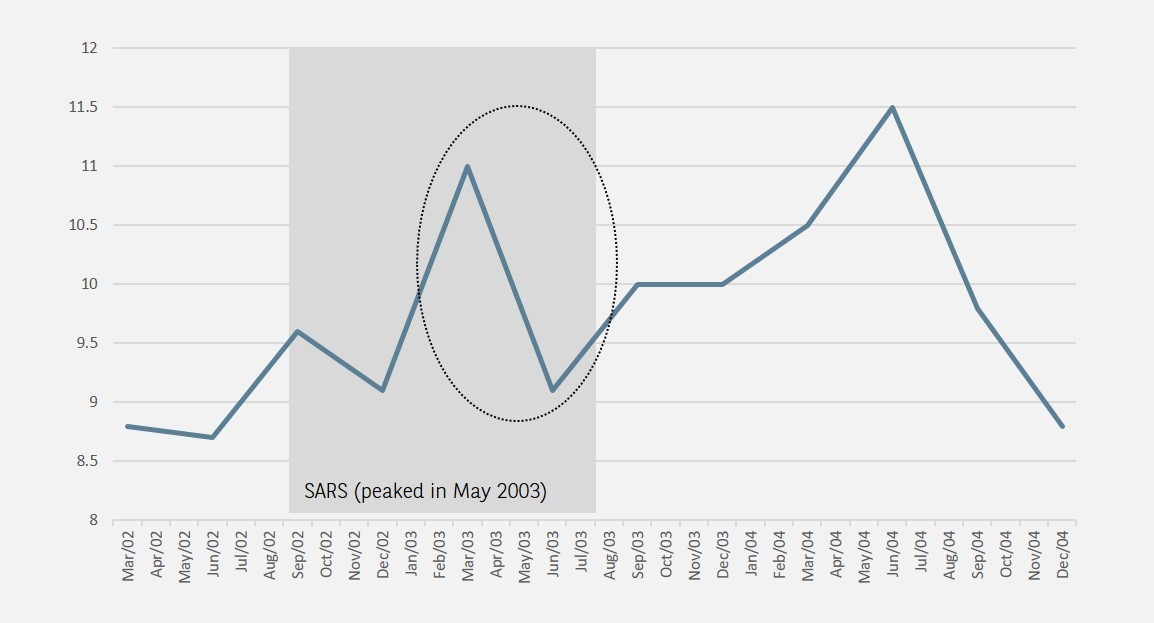 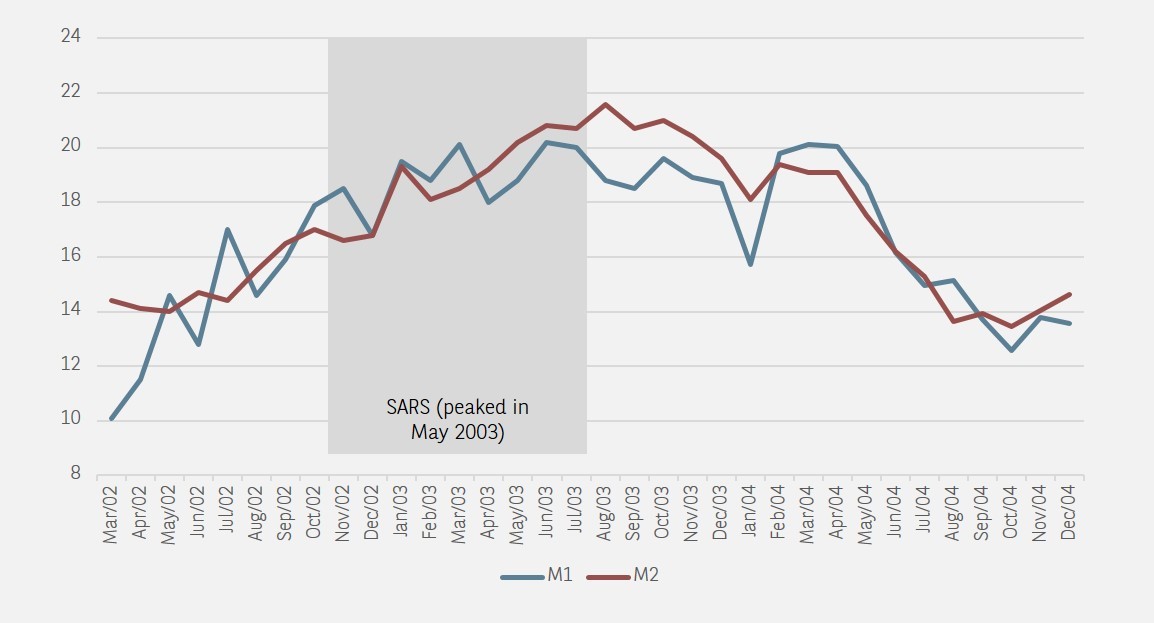 Given the experiences we have during SARS outbreak (Diagram 7), retail sales, tourism, hotel & catering, transport and the leisure sector are likely to underperform other sectors, especially in 1Q and 2Q this year. E-commerce, online video, PC/mobile games, packaged food and food retailers are likely to benefit, as people avoid interactions and outdoor activities.

The healthcare sector may also benefit due to increased demand for vaccines/health check-ups, though no drugs/vaccines are yet available to directly treat or prevent this new virus. 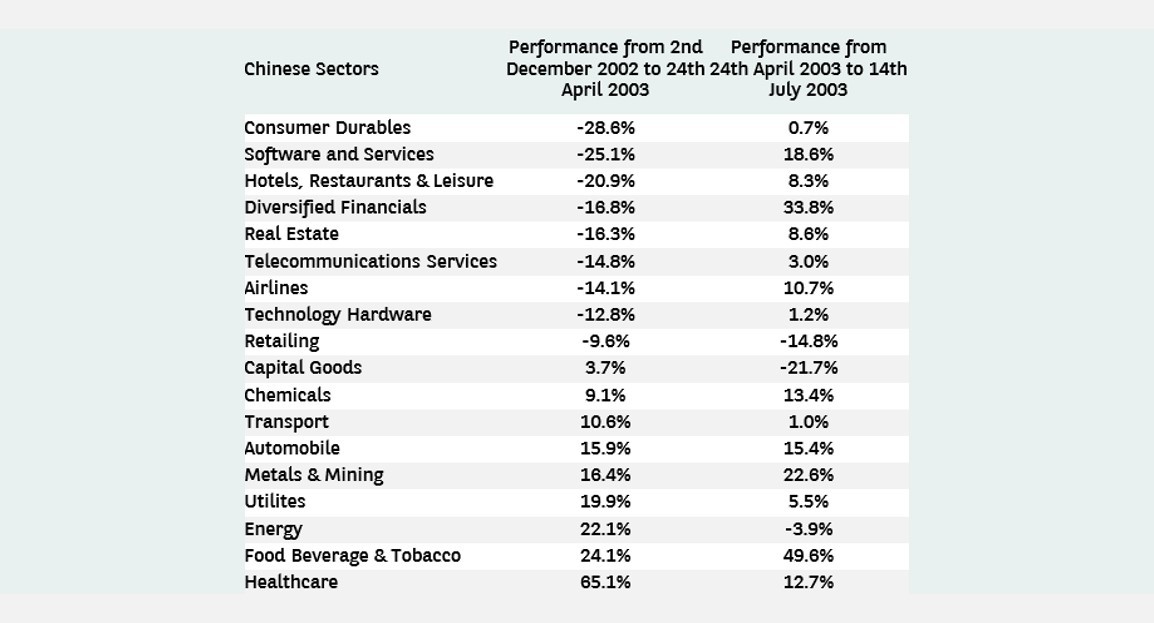 Coronavirus Outbreak is Expected to be Short-lived

Looking ahead, although we expect the epidemic to further dampen risk sentiment in the immediate future, we do not believe the virus will derail market directions in the medium term.

So far, general market consensus expects the reported cases to peak around 10 March 2020. Our rationale is that based on SARS experience, it could possibly bottom 1.5 months after reported cases peaked (adding on 1.5 months to 10 March will come to 25 April).

Given the SARS experience that the market bottomed around the reported cases peaked, we do not rule out the possibility that history will repeat - only differences are the magnitude of the correction would be smaller whereas the timing of rebound would come earlier.

Finding the Elephant Cubs in the Room

For the rest of 2020, we continue to explore opportunities to ride on long-term structural themes such as Artificial Intelligence (AI), 5G beneficiaries, cloud computing, and China chipset localisation.

On the same token, we see more opportunities in Shanghai A Share market than Hong Kong H-shares. That said, we will steer our portfolio weighting towards China A share in nearby future.