China Bull – Healthy or Sick?
YOUR WEALTH
HAS A VOICE.
LET IT BE HEARD. 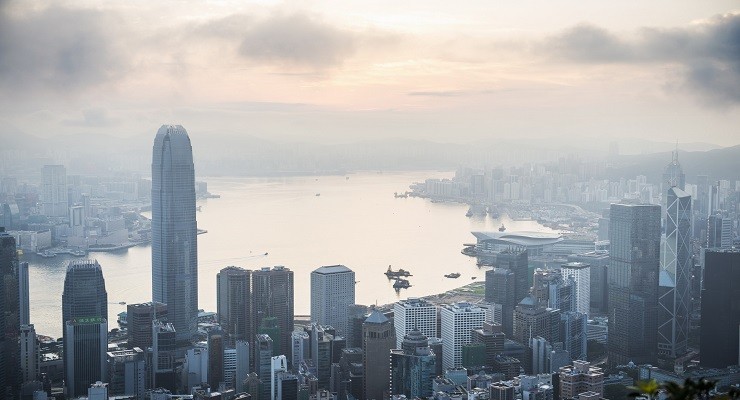 As we step into July 2020, both Hong Kong and China onshore stock markets staged a strong run. Turnover in both markets spiked, with total turnover in Shanghai and Shenzhen alone amounting to more than RMB1.5 trillion, marking the highest level in 5 years. The China market’s bull run has started since 30 June 2020. It accelerated after getting the Central government’s semi-official “endorsement”.

Officially Endorsing the Beginning of a Bull Market

On the front page of China Securities Journal (a semi-official government media associated with Xinhua News Agency) on 6 July 2020, it said China A-share markets “have to be, have the criteria and have the foundation” to have a “healthy” bull market, which is needed to promote economic recovery, to attract foreign investment and to compete with the other countries.

In fact, it is not surprising that Beijing wants to replicate President Trump’s big success in creating a V-shape rebound in the stock markets. The resultant wealth effect and sentiment boost have proven to be an effective way to resolve many domestic economic challenges amidst COVID-19 disruption.

Unlike the 2015 A-share bull run (which was driven by leverage and margin financing), the A-share rally so far seems to be driven mainly by fund switching from onshore bonds and bank deposits into equities.

With the falling domestic bond yield as well as deposit rate (Diagram 1), local investors have been trying to find a good investment vehicle to park their money. In the past decade, they have been purchasing wealth management products (WMPs) issued by the Chinese banks, which used to yield 6%+. However, return of these WMPs have dropped significantly, making them no longer attractive. 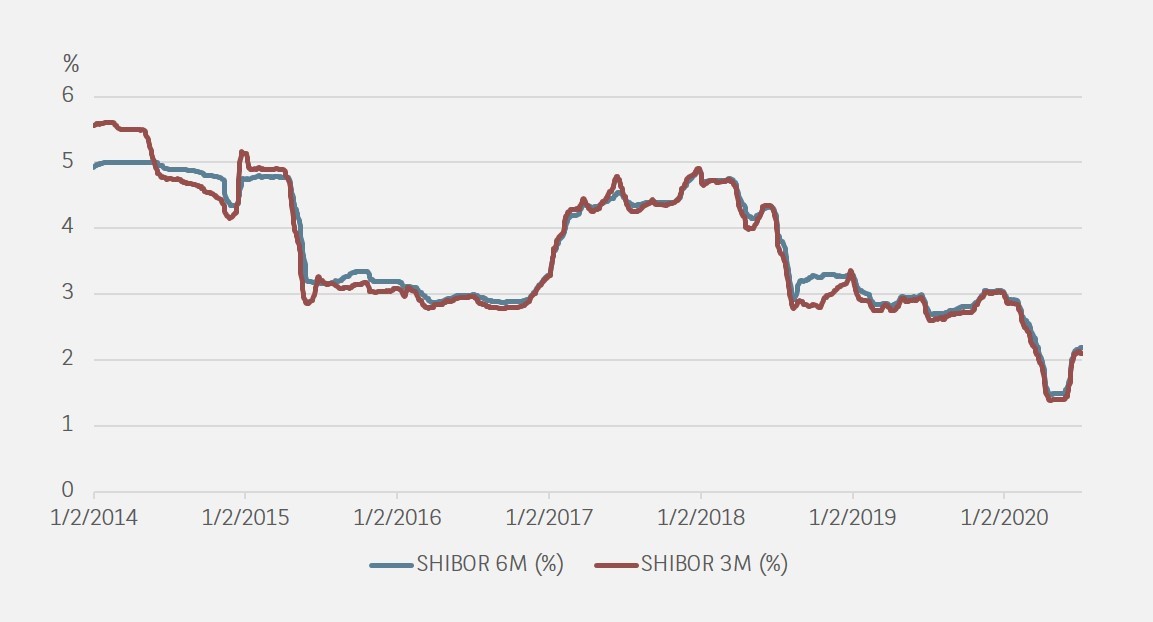 Source: Bloomberg, as of 7 July 2020 The above chart is for reference only and does not represent current or future performance.

China-version QE Infinity in the Form of Total Social Financing

The People’s Bank of China does not guarantee a Quantitative Easing (QE) infinity in China, unlike its counterpart in the US. Neither has it announced any massive stimulus package. Nevertheless, it injects market liquidity in the form of accelerating total social financing (TSF), as deferred repayments from bonds and loans has been rising significantly for the real economy.

Moreover, until recently commercial banks are also allowed to participate in brokerage business. This is interpreted as another positive signal to the China equity markets, as investors can now leverage on the huge balance sheet of Chinese banks for stock investing, in particular margin financing.

Margin financing so far amounts only to RMB1 trillion, much less than around RMB2 trillion recorded in 2015 (Diagram 3). Not to forget that the market cap of A-shares have expanded significantly over the past 5 years and therefore there should still be more room for expansion in TSF. 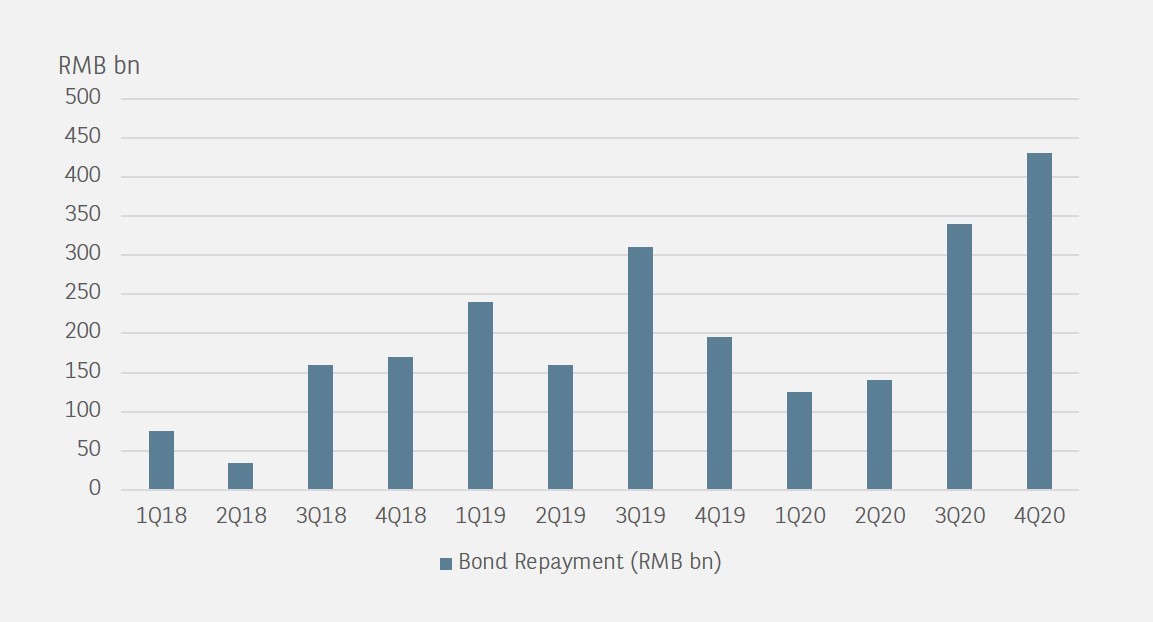 DIAGRAM 2: COROPORATE BOND REPAYMENT IS ESTIMATED TO SPIKE IN H2 2020 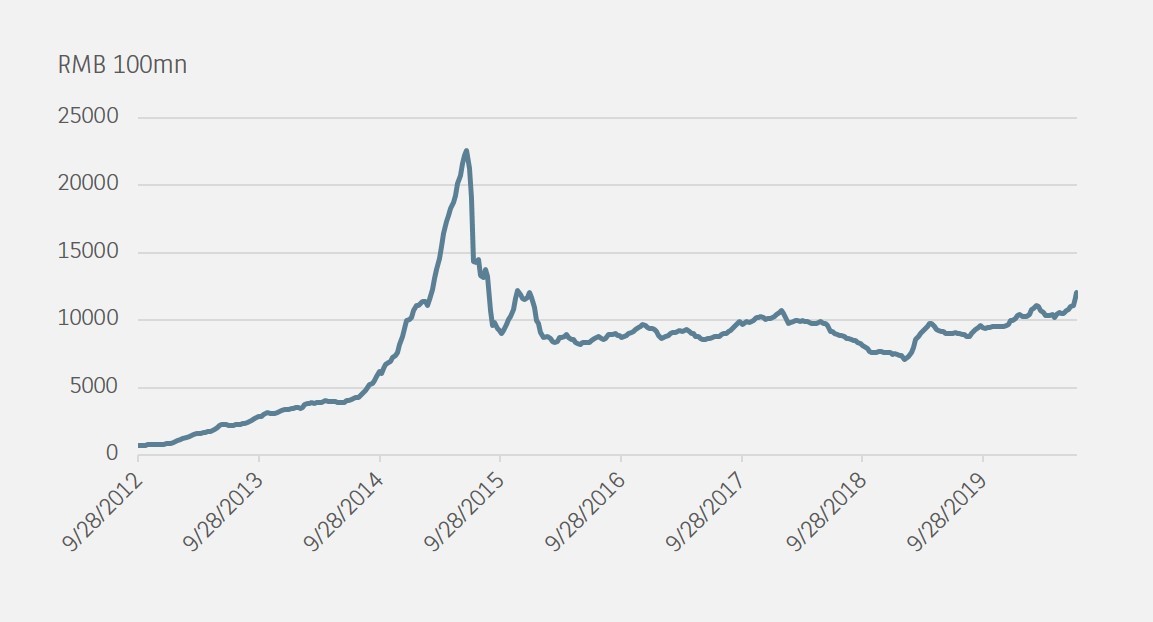 While this “healthy” bull just started to run, it could become a “sick” bull later as history usually repeats itself. Investors who have participated in the 2007/08 and 2014/15 China A-share bull market should be aware of the nature of China’s equity market – it comes fast, and leaves fast (Diagram 4). 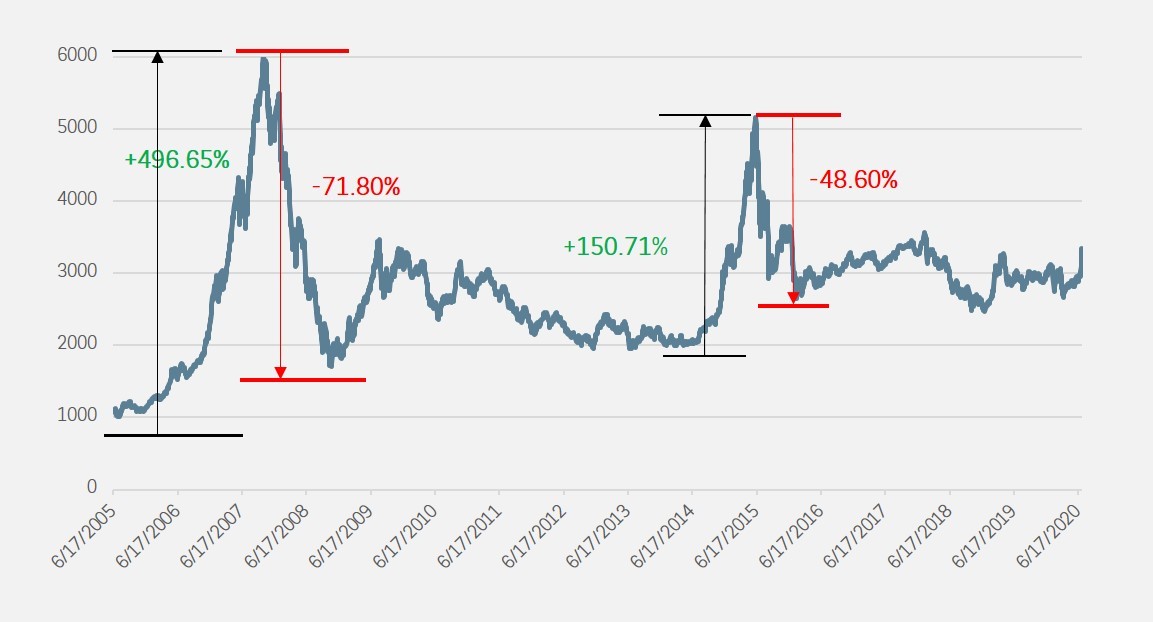 After a strong rally in early July 2020, the Hong Kong/China equity markets seem to be overbought in the near term.  In this recent rally, high quality technology companies actually took a breather, while low-growth old economy companies (such as insurers and banks) staged a strong rally.

This anecdotal evidence suggests that funds are rotating amongst different sectors and are chasing the laggards. As such, we expect a near-term consolidation driven by profit taking.

We continue to advise investors to take the forthcoming consolidation as a re-entry opportunity to rebuild position in China equities. Despite recent reforms, China onshore equity market is still relatively closed and largely dominated by local retail investors (with about ¾ market share). Investors should act quickly.

More importantly, investors also need to make sure they are not the last to jump off the boat. The Shanghai Composite Index lost ~70% and ~50% respectively in the 2008 and 2015 correction.

With the unusual “endorsement” by the Central government, this healthy bull seems to be able to last for a while after a healthy consolidation. However, it should also be noted that it is common for the government to try to talk down the market if the bubble runs too big/ fast. We expect this would bring heightened market volatility in the near term.

At the end of the day, a bullish stock market and the wealth effect are one of the most important elements to save the Chinese economy. Thus, we do not expect policy to derail until we see a significant and promising rebound in Chinese economics data.

Despite uncertainties in competitive landscape, we believe leading securities firms should be more capable to capture new opportunities on institutional business.

In a liquidity/policy-driven bull market without strong fundamental corporate earnings support like the current one, market sentiment tends to be fragile. Here are the potential risks highlighted which may lead to high market volatility:

3) Deterioration of flooding in China

All the above charts are only for reference and do not represent current or future performance.

On the Verge of Bold Stimulus - HK China Equities