Rebooting the World's Factory - An Update and Reality Check

Chinese economy continues to strongly rebound post COVID-19. As expected, the recovery is initially driven by the supply side – coal consumption and steel mill operations are moving up (diagrams 1 and 2).  Industrial production is also expected to accelerate to ~5.5% in May (diagram 3).

On the demand side, unemployment/ salary cut remains a major psychological overhang for most Chinese consumers, as illustrated in the Year-on-year (YoY) decline in May retail sales.

China’s export sales, despite holding up well in April (+3.5% YoY1), may face more downside risk as the backlogs are being cleared and the delayed impact of order cut from US/ Europe gradually emerges. 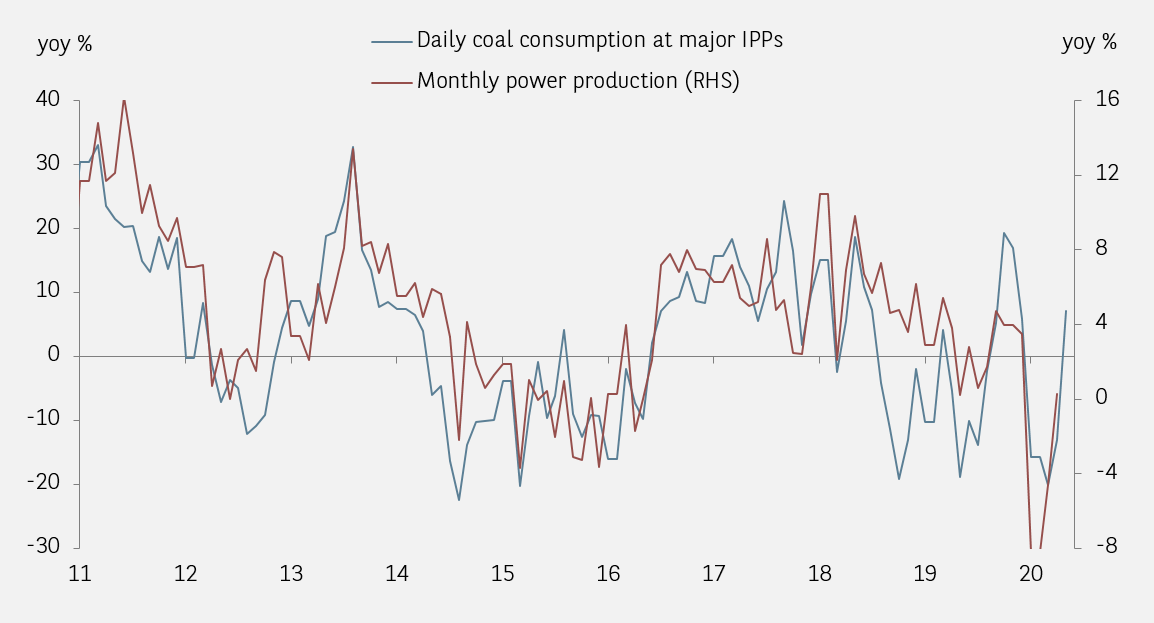 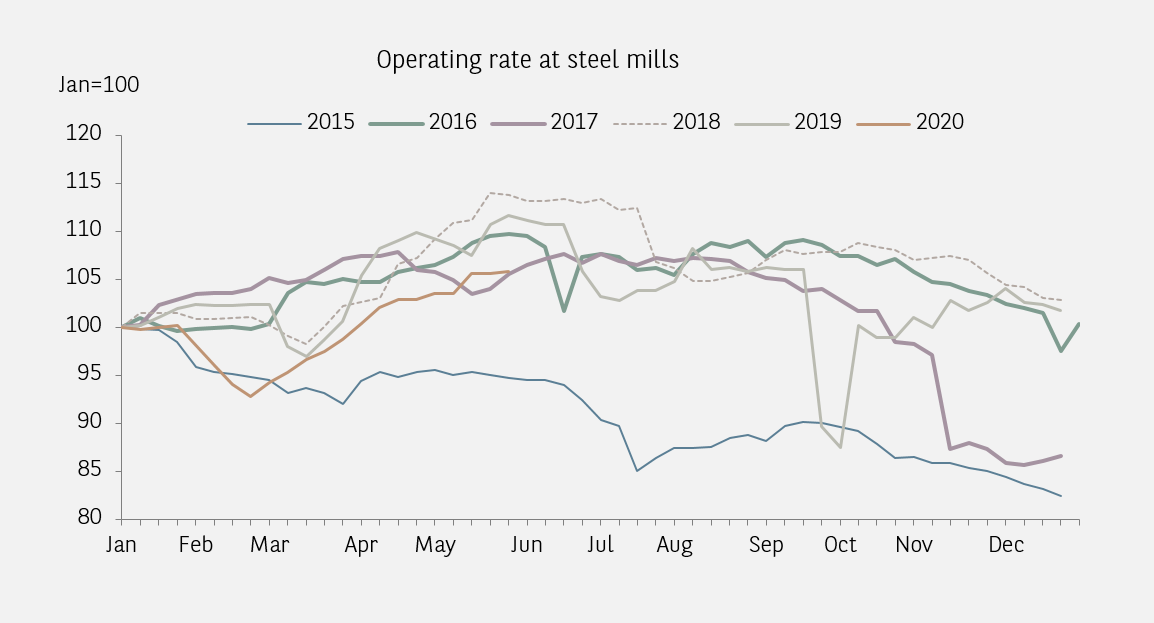 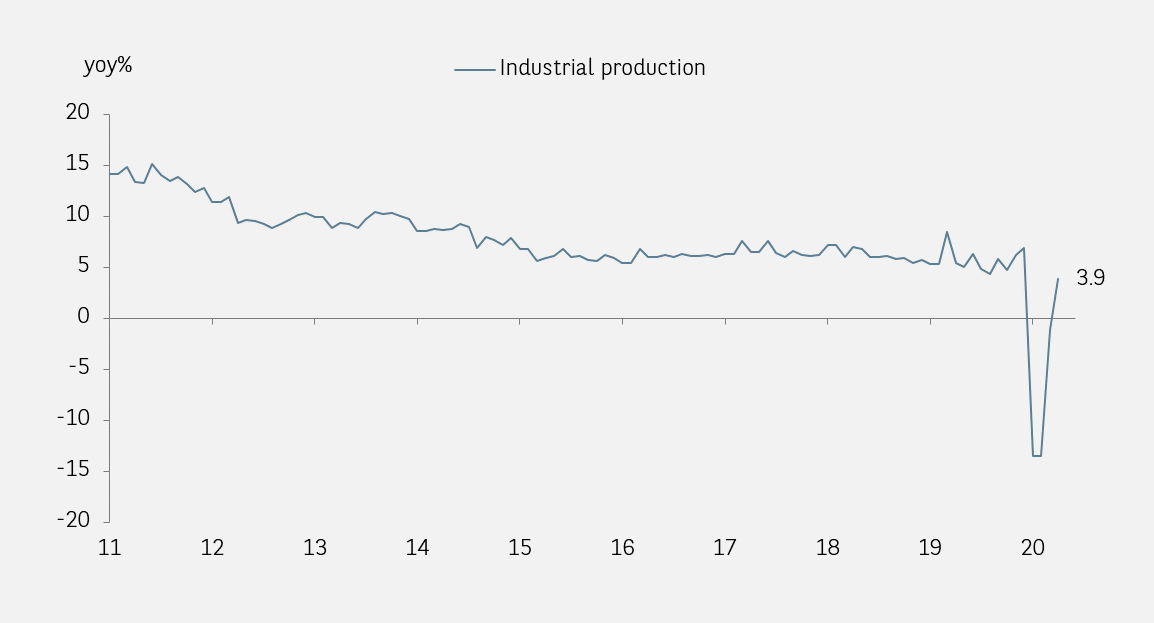 Source: NBS, Wind, Macquarie, May 2020 [1] Customs General Administration PRC The above charts are for reference only and do not represent current or future performance.

On the policy front, the China National People’s Congress (NPC) in late May mapped out the government targets and policy framework for the rest of 2020.

Without surprise, under the severe disruption by the pandemic, the central government has not set any specific target for 2020 GDP growth. This should leave policy makers with more flexibility in the implementation of creative stimulus measures.

In general, the broad deficit is planned to rise to 8.2%2 of 2020 GDP (from 5% of 2019 GDP). More support, especially on the provision of loans (diagram 4), are expected to be targeted to businesses (especially small businesses), livelihoods and employment.

A recent example is the “street stall” economy concept advocated by Premier Li, which has been well received by investors. 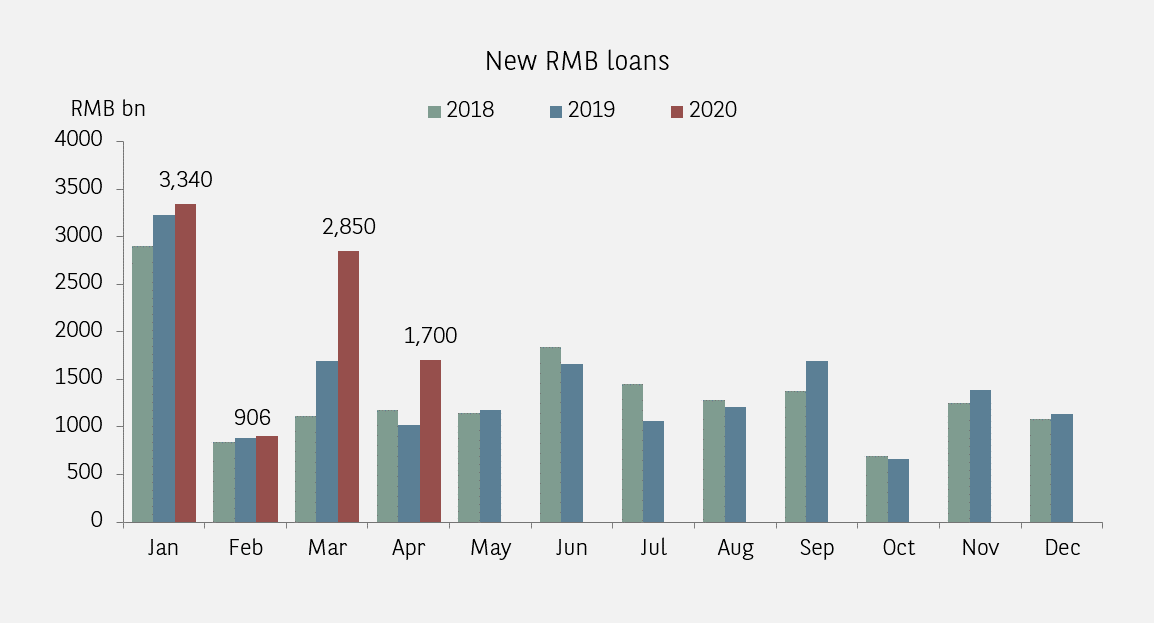 China Onshore A Share May Be Due For A Re-rating

Despite the deteriorating underlying economic growth, global equity markets continue to rebound strongly. The China onshore A shares is no exception.

This is largely triggered by hopes of

1) massive government stimulus measures, which subsequently lead to huge liquidity spilling over into the stock market, and 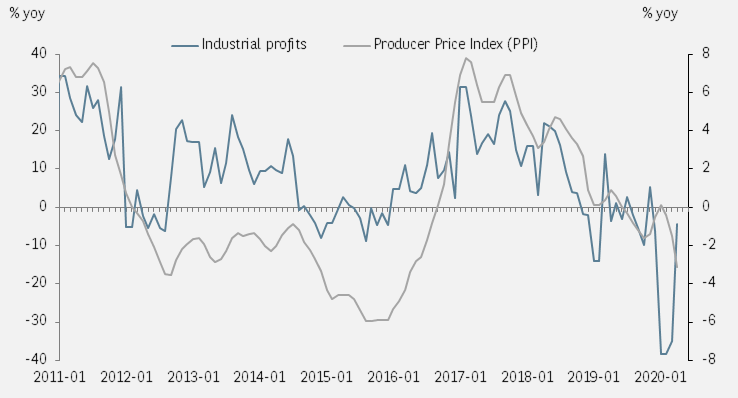 Source: NBS, WIND, Macquarie, June 2020 2 National People Congress (NPC) The above charts are for reference only and do not represent current or future performance.

On the other hand, Phase 2 Sino-US trade deal negotiation has always been an overhang for Chinese stocks. With the US now facing more severe domestic social unrest, it is generally believed that the Trump administration will focus more on domestic issues rather than opening fire diplomatically with China.

This should lead to a smoother trade deal negotiation process, and a deal completion earlier than expected. The terms are also more likely to be in favor of the China side. This serves as a strong catalyst for China stocks, which is still far from being priced in in our view.

China economy has almost fully resumed post COVID-19, and massive stimulus measures have successively kicked in. We believe this will be translated into corporate profits soon (likely in a few month’s time).

Relatively speaking, China onshore A shares is still under-owned by global investors (diagram 6). Further MSCI inclusion will drive more fund into A shares in the medium and long term.

Technically A shares Moving Average Convergence Divergence (MACD) is at an inflection point and ticking upwards, suggesting momentum is coming back and is due to break the resistance at 4000 points for CSI300. 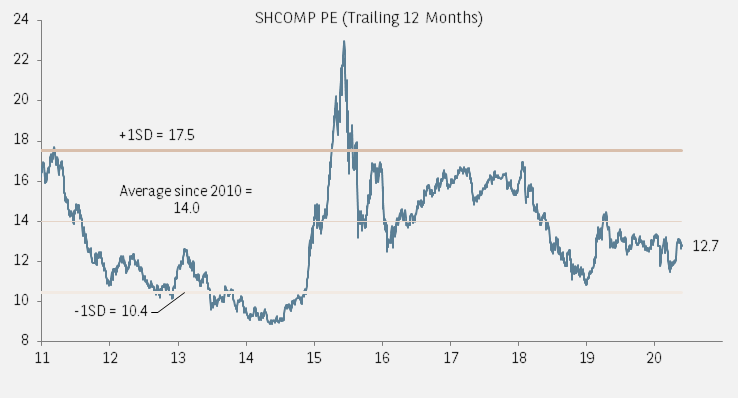 Source: Wind, Macquarie, June 2020 The above chart is for reference only and does not represent current or future performance.

"Coming Home" Theme for China ADRs will be Accelerated

China American Depository Receipts (ADRs) coming home has been the key market focus since May 2020. Stellar dual-listing performance of China’s largest e-commerce platform in the HK Stock Exchange in 2019 successfully paved the way for other large cap China ADRs.

This trend of going home is likely to continue on the back of a strong push factor and a pull factor.

PUSH FACTOR - The US Passed Bill to Delist Chinese Companies

On the one hand, the US Senate has passed a bill to delist Chinese companies from the US Stock Exchanges. The bill says that if

(i) a foreign company will not certify that they are not owned/controlled by a foreign government or more importantly, and

(ii) the Public Company Accounting Oversight Board (PCAOB) is not able to audit the company for 3 consecutive years, then these companies will be banned from trading on US exchanges.

At issue is China’s longstanding refusal to allow the PCAOB to examine audits of firms whose shares trade on the New York Stock Exchange, Nasdaq and other US platforms. This issue has flared up again in the wake of Luckin Coffee’s admission of fraud. A quick glance at PCAOB’s list showed all the major China ADR names will be impacted.

There are views that the bill is unlikely to become law except in a heavily watered down version.  We note that such delisting is a complicated process and comes with serious concerns of disrupting markets and seriously hurting US investors.

Even if set in stone, i.e. it becomes law, this would have to be gradual process taking several years. Some analysts estimated that the Chinese ADRs will be forced to delist in 2023. The Senate bill says the three-year period commences when the bill is enacted.

On the other hand, China is also keen to let its tech giants to return home. Hong Kong and China regulatory bodies/ Stock Exchanges have never been so supportive, as the threats from US politicians escalate and the US-Sino trade war intensifies.

Looking at the numbers, there are over 200 China ADRs listed in the US (primary listings only) with a market cap of ~US$1 trillion which is equivalent to 8.5% of combined A and H Chinese-listed companies.

Although the numbers involved in relisting seem daunting, given that any delisting law that passes will provide a lengthy transition, this should be manageable.  Moreover, the top 5 names are the bulk of the potential overhang cap (over 2/3 of market cap and trading volume, with China’s largest e-commerce company constituting ~50% of this) (diagram 7).

For the management of China ADRs, they are also keen to seek a dual listing in HK, which serves as an “insurance” in case there are further sanctions from President Trump.

This also, in the longer run, represents an important stepping stone for China ADRs returning to the onshore A share markets ultimately. Not to mention that share price usually gets a strong boost before its Hong Kong IPO debut, leading to a rise in the major shareholders’ personal wealth.

The silver lining in this is that the “Going Home” theme will continue for China ADRs, which should drive positive rerating of upcoming dual-listed shares. 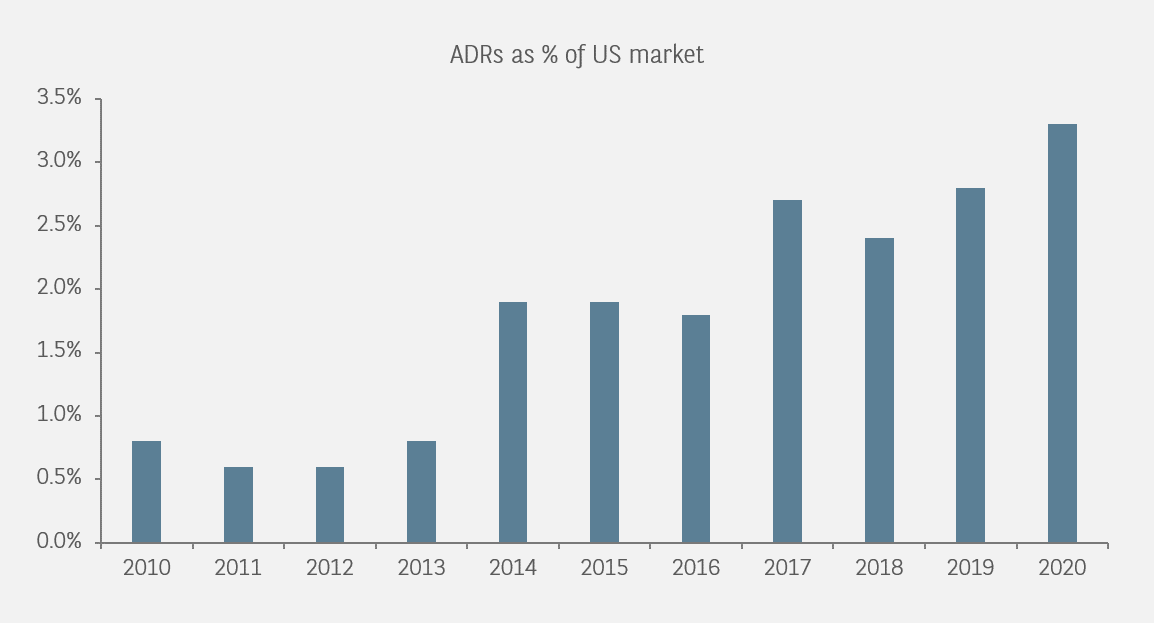 Source: Goldman Sachs The above chart is for reference only and does not represent current or future performance. 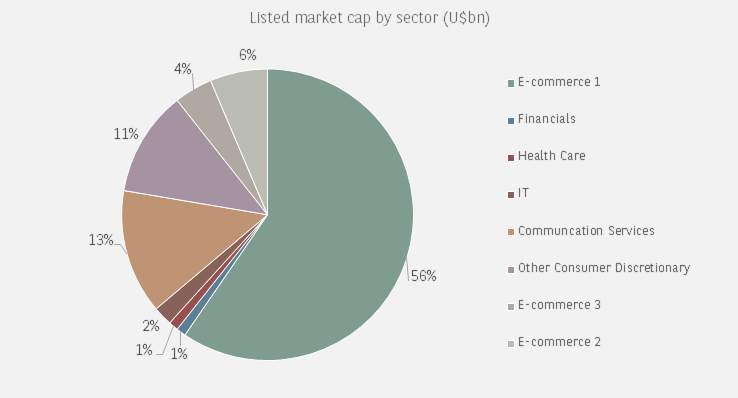 DIAGRAM 7: CHINESE ADRS - ADRS AS % OF US MARKET

Source: Goldman Sachs The above chart is for reference only and does not represent current or future performance.

How Important are ADRs to the US Exchanges?

There are currently 233 Chinese ADRs listed in the US (primary listings only), with an aggregate listed market cap of ~US$1 trillion, representing ~3% of US equity market cap (diagram 7).

On average, they collectively trade ~US$8 billon a day, comprising 6% of total US turnover or 50% of total ADR turnover.  China ADRs accounted for 50% of all ADR capital raising (US$10 billon) in 2019.

Delisting of Chinese ADRs would imply a sizeable loss in secondary and primary trading revenue to NASDAQ as well as a drop in market cap. It is estimated that US investors currently hold US$350 billon worth of Chinese ADR equities, translating into roughly 1/3 of ownership in the ADR universe.

Where are the Alternative Exchanges for these ADRs?

For the A share market, only the Nasdaq-style tech board — the Science and Technology Innovation Board, or “STAR Market”, allows listing of companies with dual-class share structure, and that is not accessible to foreign investors freely through Stock Connect.

It is also not easy for foreign investors to participate in IPOs onshore.  Therefore, Hong Kong is expected to be a preferred venue unless companies choose to list on both A and H share markets, or there is explicit government pressure to list on the onshore market.

What is the Impact from the Index Weight Loss?

We think the impact from index weight loss e.g. MSCI/FTSE indices are unlikely in presence of fungibility of US/HK listing, where the US-listed ADR can be replaced with the HK-listed counterpart, if the former is delisted.

Meanwhile, given its large market cap, the HK-listed share of China’s largest e-commerce company will likely be added to FTSE China 50, HSI and HSCEI indices in 2H2020.

Furthermore, we think the southbound inclusion process for dually-listed China ADRs will likely be expedited in order to support Hong Kong liquidity.

Currently the requirement is 6 months +20 days of listing time before eligibility; hence the earliest timeline of inclusion for the first returning China ADRs stands at 23 June 2020.

In general, the listing of China ADRs should be a positive development for the Hong Kong Equity market. This could not only boost the Hong Kong market’s turnover by as much as 30% (diagram 8), but also lead to a structural re-rating of the Hang Seng Index (HSI) as more high growth/ high Price-to-earnings ratio (P/E) China ADRs are admitted to the HSI.

HSI is currently trading on a forward P/E of 11x. We should not be surprised to see its P/E ratio expand to 12-14x in the next few years, as the weighting of low PE, old economy stocks (e.g. Chinese banks and energy) subsides. This is exactly the key reason why the equity indices in the US have enjoyed a nice rally and multiple P/E expansion in the past decade.

As such, we are increasingly confident about our Overweight call on China. 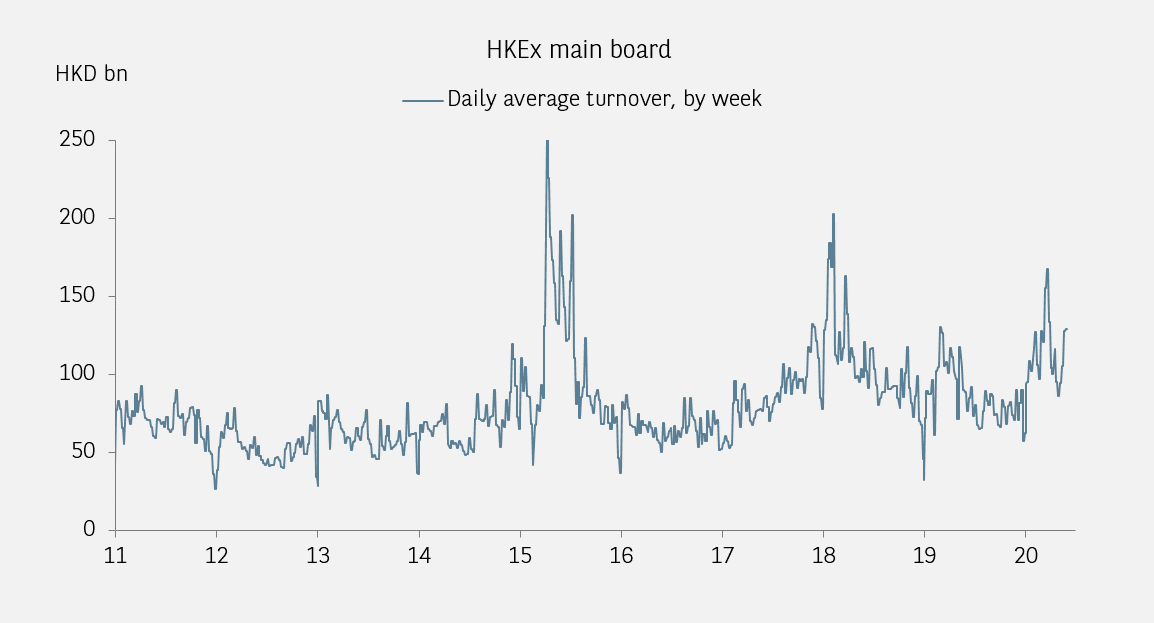 Source: HKEX, Wind, Macquarie, June 2020 The above chart is for reference only and does not represent current or future performance.

Waiting Silently Is Just the Hardest Thing of All