HK China Stock Market November 2019
YOUR WEALTH
HAS A VOICE.
LET IT BE HEARD.

HK/China Equity Perspectives [Nov] : Return of the Bulls & Potential of a Year-end Rally

All major global equity indices reported decent returns in October (see diagram 1), with transaction volume improved slightly on a month-on-month basis. These, in our view, are partially due to seasonality and improved investor sentiment. 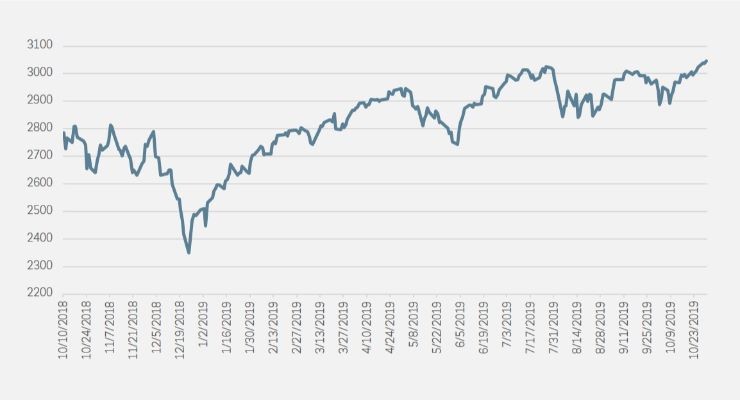 THE UK: With the EU now extended the deadline by three months to allow time for the UK Parliament to discuss about the new agreement, also a general election date being confirmed, the chance of an orderly Brexit has increased.

While uncertainties remain, sterling has risen against the US dollar by 5.20% during the month (see diagram 2), and companies with high UK exposure also experienced meaningful re-rating. 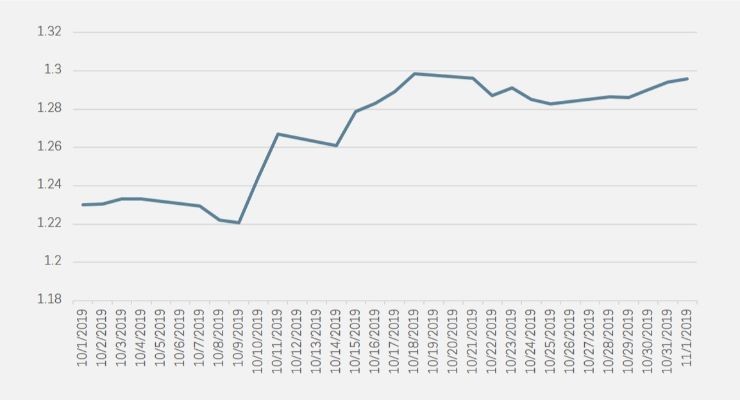 THE UNITED STATES: US 3Q19 results came largely better-than the lowered estimates. As of 30 October, 60.9%/78.4% of the reported companies reported revenue/ net profit better-than consensus projection (see diagram 3). While we are not surprised by the result, as the same pattern has been repeating in the last three quarters, we consider it an important piece of evidence that the US economic status remains solid. 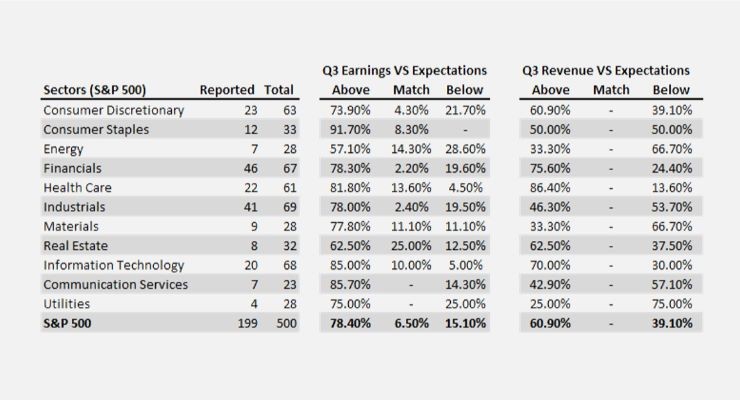 The US FED cut interest rate again by another 25bps. Although the post-meeting message suggest the mini-cycle rate cut is likely to pause from here (see diagram 4), we expect the FED to act promptly if future data shows any weaknesses in the US macro economy. 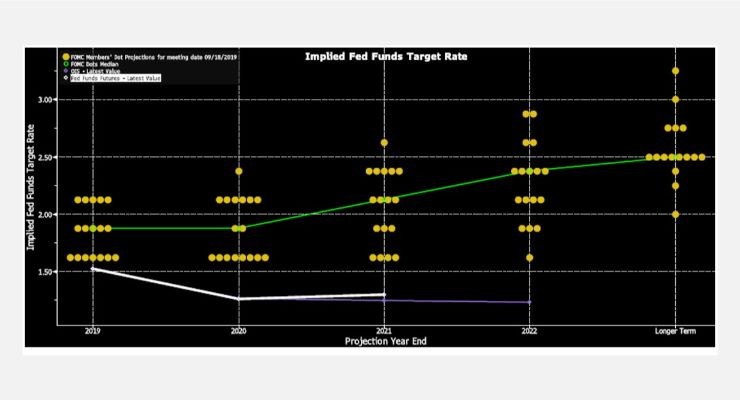 CHINA: With China’s 3Q GDP growth came in below expected at only 6% (see diagram 5), which is considered the bottom-line set by the government, while industrial profit continues to see weaknesses, some investors are taking the view that “bad news are good news” and expect more economic stimulus to be launched by the Chinese government in the near-term. 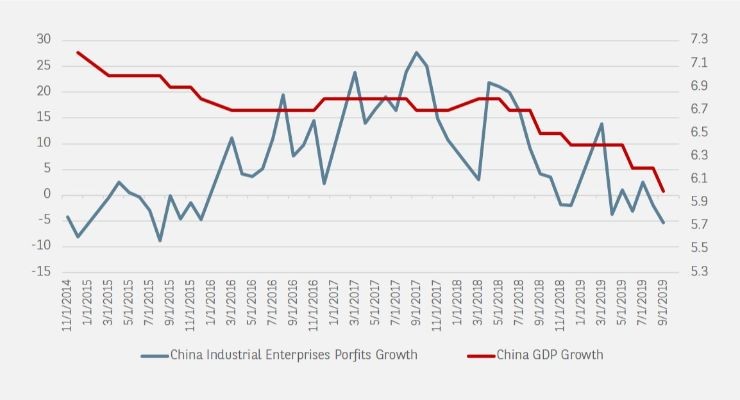 INTERESTS IN HONG KONG IPOs IS BACK

Nevertheless, interests in new share issuance is back, and Hong Kong has beaten other major equity markets in terms of amount of funds raised over the last three months (see diagram 6).

The strong interests did not only come from institutional investors, retail investors also actively participated in recent Initial Public Offerings (IPOs). We saw a few cases that public offerings (also known as the retail trench) received over 100 times or even 500 times over-subscriptions.

In our view, in an equity market that lacks particular investment themes, a strong interest in new listing is a sign of positive change in sentiment towards equity investment.

Given the improved investor sentiment, supported by the factors mentioned above, and with no sign of imminent economic downside risk, we see decent chance the trend will continue and point to a potential year-end rally. 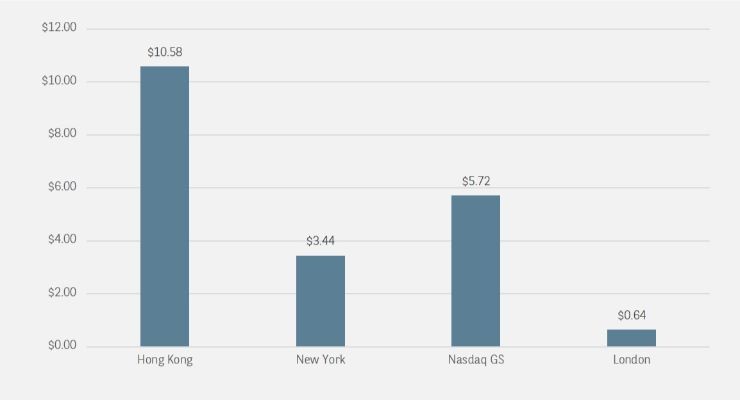 Sources: BNP Paribas, Bloomberg, as of 25 October 2019. The above chart is for reference only and does not represent current or future performance. 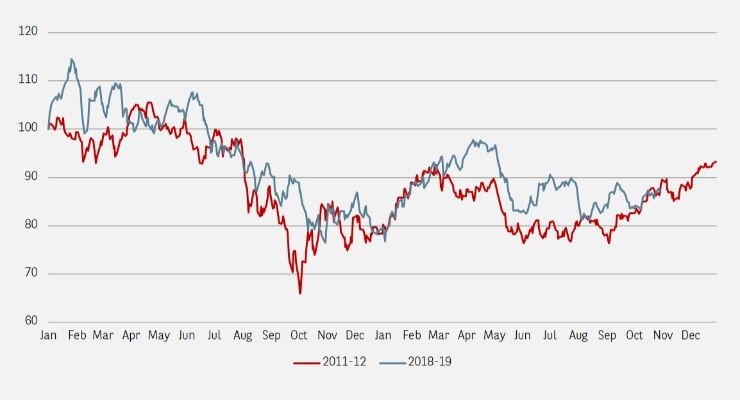 Source: BNP Paribas, Bloomberg, as of 31 October 2019. The above chart is for reference only and does not represent current or future performance.

REAL ESTATE – CHINA IN AND HONG KONG OUT

We previously reduced the degree of overweighting in the Real Estate sector on the back of less favourable policy stance in China as well as impacts from the local political unrest in Hong Kong on property demand (both office rental and residential purchase).

However, we have decided to increase our exposure to the sector again. On one hand, valuations have become attractive after the recent consolidation. On the other hand, we expect policy stance to become more favourable.

In China, given its large contribution to GDP, policy tends to loosen in time when China needs a boost to stimulate the economy. On the other hand, the dovish Federal Reserve (FED) also eases the depreciation pressure against RMB, which serves as another positive to Chinese property developers, especially those that are highly geared.

Nevertheless, similar to our comments in our last publication about Hong Kong versus China consumer sectors, in real estates, we also have a preference for Chinese developers over their counterparts in Hong Kong.

Firstly, we believe policy stimulus would be more effective in China. The policy relaxation recently introduced in Hong Kong, in our view, should help to cushion further price decline in physical property market. However, it also raises supply in the second hand market as it releases pent-up demand from upgraders, therefore increases competition against primary market.

Secondly, Hong Kong developers have a higher proportion of their income from rental business. As there is no clear sign how long the political unrest will last in Hong Kong, rental income, particularly from retail business is likely to remain under pressure.