China Equities – Lingering Uncertainties
YOUR WEALTH
HAS A VOICE.
LET IT BE HEARD.

With policy headwinds hitting most of the “growing sectors”, we believe a preference for value over growth is the more prudent strategy at this point. We advocate three strategies for different sectors/investors:

2. Accumulate on weakness – Stocks trading at distressed valuation, but will take time to recover: tech (the worst has passed, but takes time for restructuring), Macau gaming (focus on local players) and automobile (limited impact from power shortage/supply chain disruptions).

Common prosperity, tech/education crackdown, Macau Gaming Law revision, property developer defaults and now power shortage - it seems that Chinese Equities cannot take a breather from one headwind after another. Despite the appealing valuations of HK-listed Chinese stocks (H-shares / red-chips), we do not see strong near-term re-rating catalysts given concerns over property developer defaults (and their subsequent impact on China’s financial system), worries about supply shortage and margin squeeze, and an expected cautious 4Q21 outlook guidance during the 3Q21 reporting season (which will start very soon).

The government’s stringent decarbonisation pledge to meet its year-end energy intensity reduction target, surging coal prices, declining coal imports, and the lack of hydropower usually do not come at the same time. But this year, such unusual concurrence has led to the current nationwide power outage in China spreading across factories and homes – which not only disrupts the already strained supply chain for semiconductors (risking a potential economic slowdown), but also adds further risk of social instability. Factories have been forced to cut production which means lowered utilisation rates and production volumes, while limiting electricity usage of shopping malls and homes also brings downside risk to consumption growth.

Although the government has shown strong determination to ensure electricity supply for winter and will not accept a large-scale power outage, it is undeniable that the supply is still well below optimal levels and power rationing should persist in the months to come. While factories’ utilisation rates fall, we do not expect a linear drop in production volumes but instead believe diseconomies of scale will come into effect. Margins, especially those of upstream players, will be under pressure as energy typically makes up a higher portion of their cost of goods sold (COGS) (see Chart 1). We also see attempts to outbid for the limited supplies, causing prices to soar past previous record highs. 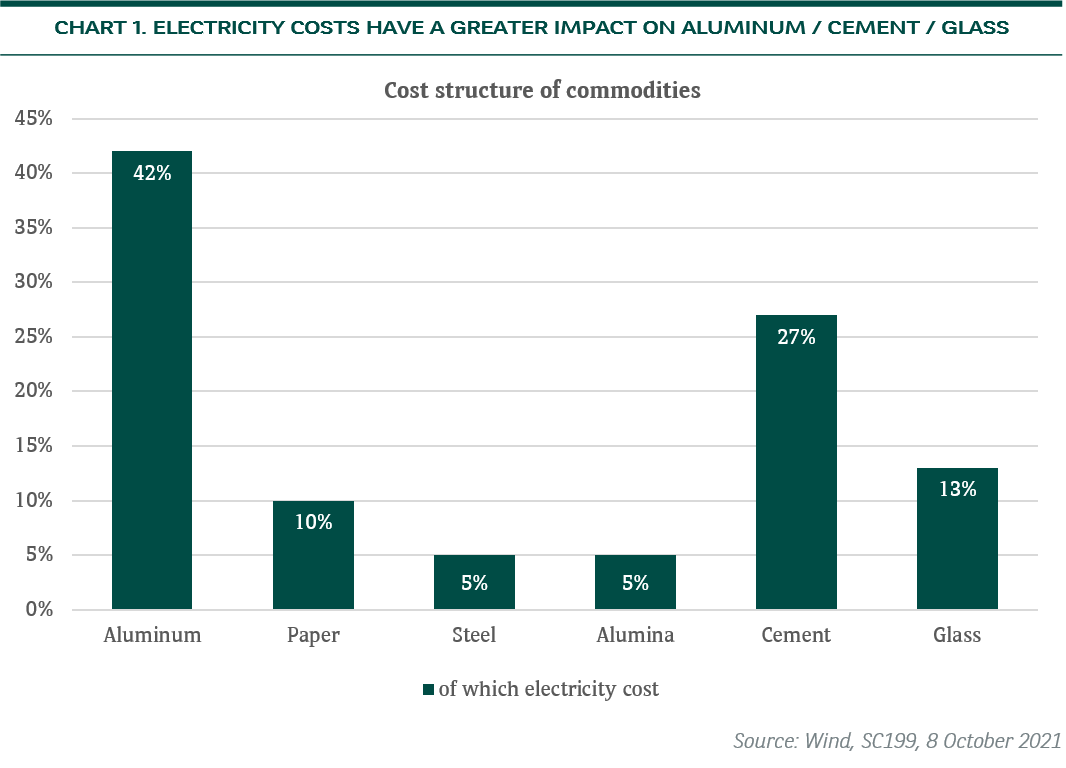 If the current production cut continues or even accelerates, it could bring downside risk to Chinese corporates’ earning growth, and hence de-rating of China equities (see Chart 2). MSCI China 2021 EPS growth currently stands at +16% YoY. The magnitude of earnings downgrade could surprise the market, as the negative wealth effect caused by weak manufacturing activities and property sector starts to ripple through consumption. 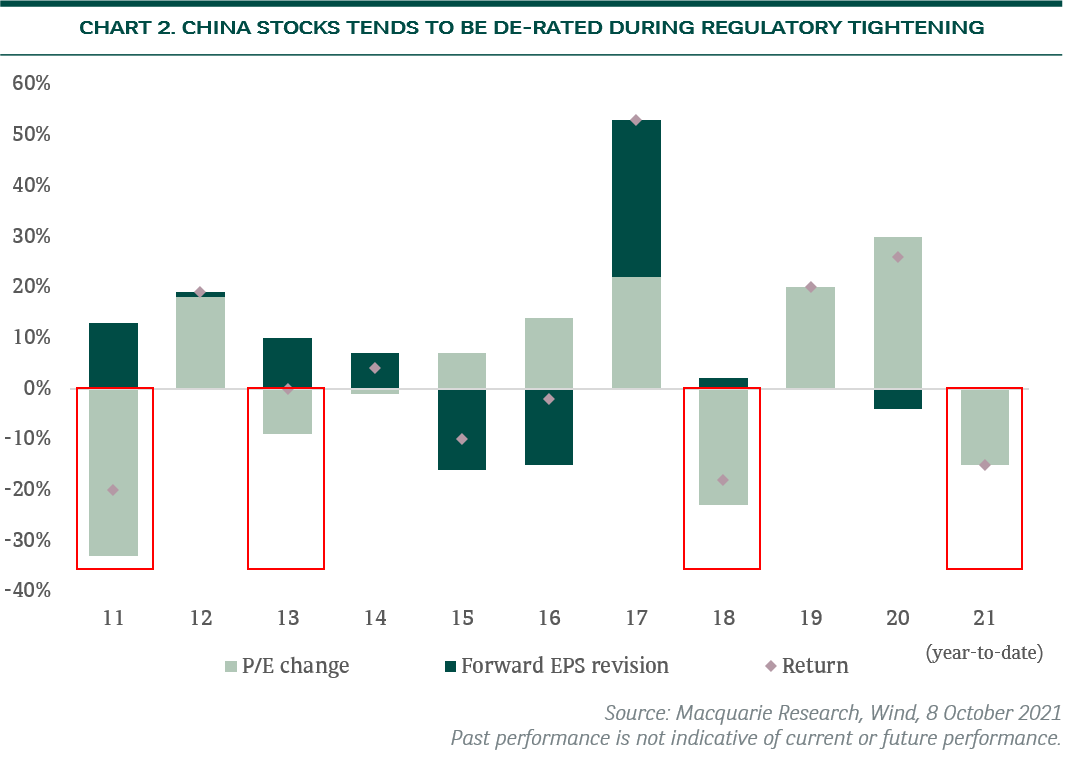 With policy headwinds hitting most of the “growing” sectors, we believe that a preference for value over growth is the more prudent strategy at this point in time. Within Chinese value stocks, we like renewables, oil and gas and telco.

Telco – The China Telco story revolves around capex, with the sector’s capex incurred in 1H21 representing only 36% of the full-year 5G capex budget. We expect a strong influx of 5G-related contracts in the rest of 2021 as operators rush to finish their network rollout projects meant for the year. Another positive catalyst for the sector would be potential dividend hikes after a telco giant announced a significant payout ratio bump from 40% to 60% to support its valuation. Competitors are likely to follow suit and an increase to the same level of payout ratio could put other players’ dividends well within the attractive range of 8-9% for FY221. Potential yield reversion to historical mean suggests further upside.

Oil and gas – With the recent heightened volatility in oil prices and concerns over global growth/inflation balance, risk-averse investors can consider stocks with stronger share price rallies within the sector. They can also lighten positions in companies vulnerable to a Chinese economic slowdown, power shortage and margin squeeze.

Renewables – Utility and renewable energy stocks have been outperforming the main indices and are contenders for the best performing sectors of 2021. Both sectors logged positive returns even in September 2021 as they were the defensive choices for investors seeking safe haven from China’s property developer defaults and regulatory overhang. We expect more supportive measures for the renewable energy space, otherwise China’s aggressive decarbonisation target can hardly be achieved.

Within green energy, we prefer wind to solar. We think the impact of power outage on the market has been relatively muted and would in fact bring opportunities to the renewable energy space.

Strategy 2: Accumulate on weakness – stocks trading at distressed valuation, but will take time to recover

Tech – Fundamentally, we maintain our overall long-term positive view on the China Internet sector given its exposure to the China consumer story as the economy rebalances away from investments, more affordable valuations and, for the longer term, a lower probability of regulatory shocks. However, we do not see many catalysts in the near term as sentiment remains extremely cautious and we expect more volatility. While 2Q21 results were mostly beats, forward guidance points to slowing growth in 2H21 in view of both regulatory and macro impact. We think the Hang Seng Tech Index may have seen the worst (i.e. may not make a lower low), and may be trying to form a bottom, with key support at 5500-6000. Hence, we do not see an immediate need to add on to existing exposure, and highly leveraged investors should consider deleveraging. Over the next 6 months, investors should also be selective, with a focus on stocks with valuation support.

Macau Gaming – Among the nine areas of focus in the Consultation Paper on the revision of the Macau Gaming Law, we see three key concerns that could weigh on valuations given the uncertainties, namely stricter control on capital, increase in share ownership of locals, and stronger government oversight. Within the sector, there could be some divergence in performance after the initial negative knee-jerk reaction. We continue to prefer local players which have a lower risk of not receiving license extension in the upcoming negotiation. Dividend expectations are also not high.

Automobile – The impact of power shortage on China autos should be minimal as any effect would be cushioned by the already impacted supply chain where auto factories are already producing below full capacity due to ongoing disruptions. Besides, automakers have been improving efficiency of their factories. Power utilisation of some key players has remained relatively unchanged, despite increasing production volumes over the past years.

Property – Market sentiment on the China property sector deteriorated rapidly in September 2021 due to default concerns, resulting in a broad-based sell-off in China property stocks and bonds. A near-term catalyst for the China property sector could come with more clarity on the troubled developers’ debt restructuring plans and any supportive measures from the government. However, there remain few structural rerating catalysts for the sector amid policy headwinds, despite the seemingly attractive valuations. Worse still, China further announced on 23 October 2021 that it will roll out a pilot real estate tax scheme in some regions. We remain selective and believe developers with stronger balance sheets and land bank flexibility would be better positioned to weather through the current backdrop of policy headwind.

Financials – The volatility of Chinese banks and insurers is highly correlated to the unfolding of the China property situation, and the sector will continue to suffer from its collateral damage. Property investments, of which insurers and banks have a good size in their investment profiles, have been considered relatively stable. The banking system has an estimated 40% direct and indirect exposure to property and its related sectors, including non-standard assets that may take forms such as debt schemes, wealth management products, perpetuals, unlisted equities etc. Moreover, escalating “National Service” burdens, including the following, are other reasons we do not like the banking sector as a whole: 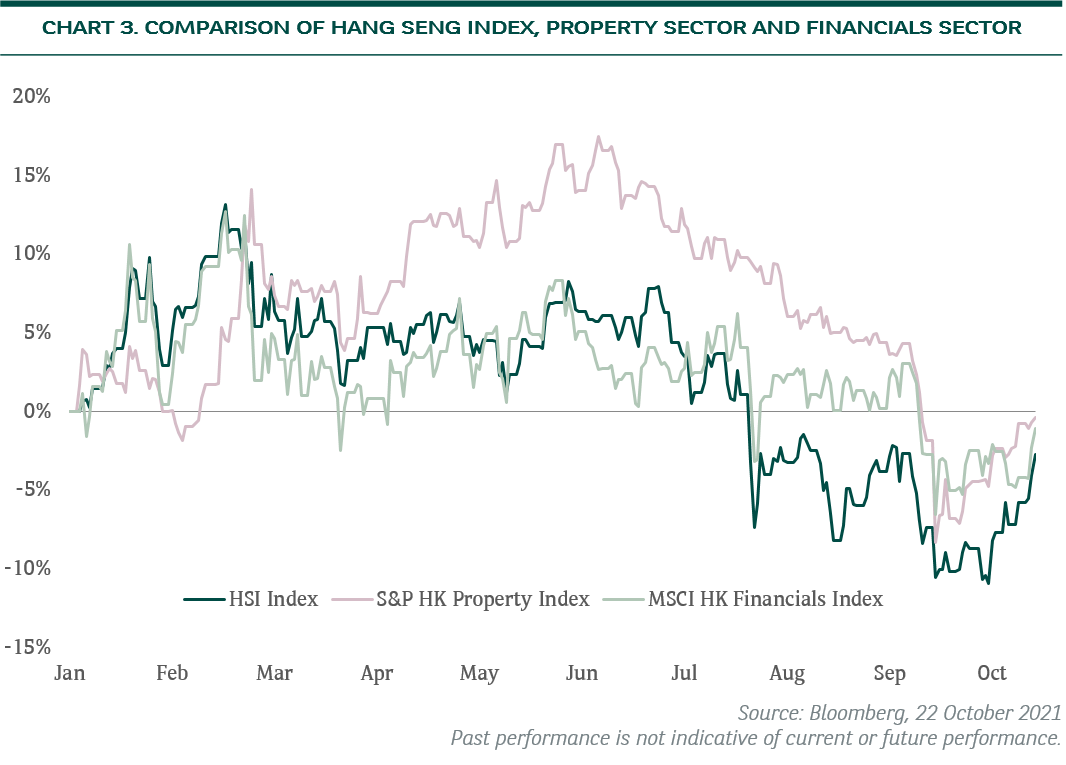