We are reducing exposure to the Hong Kong property sector given policy headwinds, while taking profit on renewable energy stocks. We are parking our investment in the safe-haven China telecommunication sector, as well as the cement sector which has received policy support.

Market sentiment on one of China’s largest property developers deteriorated rapidly in September 2021 due to looming fears of default. This resulted in a broad-based sell-off in the China property sector with the baby being thrown out with the bathwater. Even defensive/state-owned developers with strong balance sheets were not spared. China property high yield bonds were equally hard hit.

Policy support from the Chinese central government is needed to stop the bleeding, but that has not happened yet. With the troubled developer’s fundraising initiatives underway, whether banks are willing to extend credit is key, as this could otherwise translate into a negative feedback loop that leads to rising default risk for the developer, which is how the situation is unfolding.

In terms of social impact, the developer controls ~4% of China’s property market, with ~800 unfinished projects and 1.2 million people waiting to move into their new homes. A collapse could thus leave homeowners, suppliers and investors with big losses. With potential debt restructuring, the risk of operations halting should be lowered. Our base case remains that of an orderly restructuring of the company’s debts, and any deviation from the base case may lead to a further sell-off.

Property sales in China in the first week of September 2021 remained weak, as the sales volume in 15 key cities decreased by 14% on a year-on-year basis. We expect property data to continue to weaken in the next few months as the government is determined to march towards “common prosperity” and provide affordable homes for the masses. Together with slow property sales and weak mortgage loan growth, any default risk can be contagious for the broader property sector.

A near-term catalyst for the China property sector could come with more clarity on the distressed developer's debt restructuring plans and a supportive stance from the government in managing the issue and systemic risk in general. That said, there remain limited structural rerating catalysts for the sector amid policy headwinds, despite the seemingly attractive valuations (see Chart 1). For the sector to rerate sustainably, we need to see signs of policy easing towards developers. 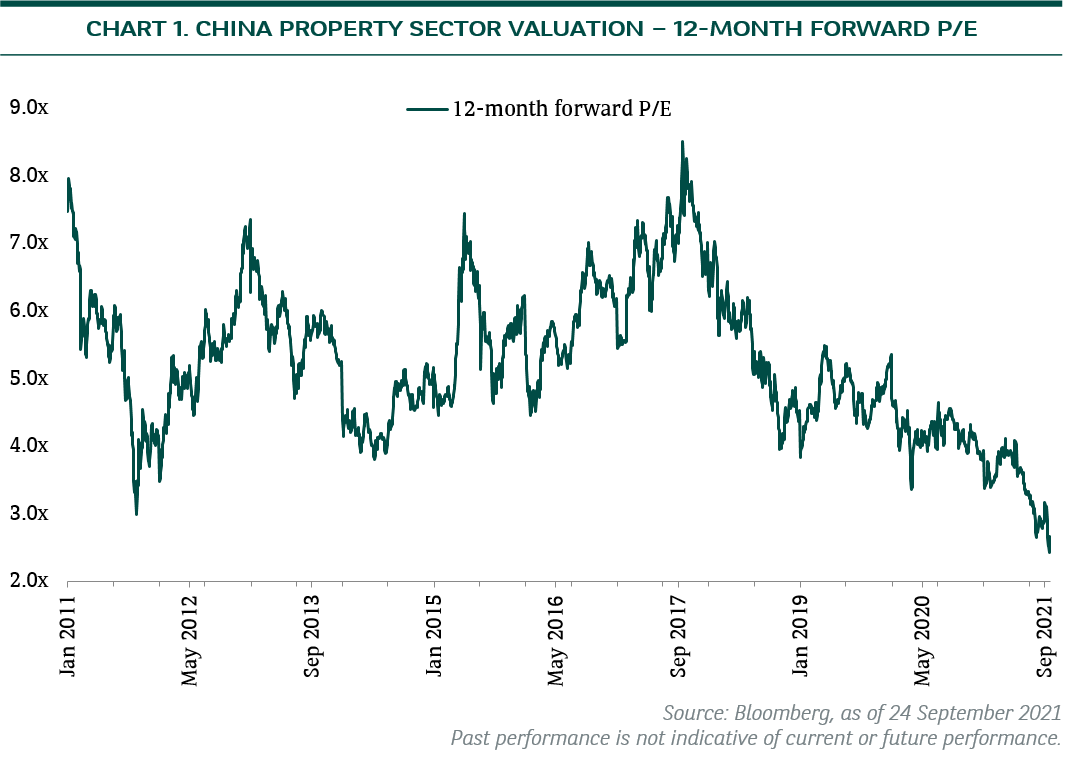 We remain selective and believe developers with stronger balance sheets and land bank flexibility would be better positioned to weather the current policy headwinds. We continue to favour China large-cap quality names (especially state-owned enterprises) with stronger balance sheets, which are possibly the only companies that will see limited financing impact from policy tightening. Over the long run, they may even emerge as winners as they gain market share by acquiring the land resources from the troubled developers at distressed cost.

Will Hong Kong property developers face the same fate as their China peers?

Hong Kong property developers are generally perceived to be a relative safe haven versus their China property peers – in terms of balance sheet strength, policy risk and corporate governance. However, they were also sold off starting from mid-September 2021 (see Chart 2) in reaction to a Reuters’ report that Beijing had imposed a new mandate for HK developers to help solve the housing supply/demand imbalance in HK1. Although the central government does hopes to fix the city’s housing problem, it has denied the news that it has delegated such mission to HK developers in a closed-door meeting2. Nevertheless, it is widely believed that the intention of mitigating high home price pressure is clear, as the same “common prosperity” philosophy gains traction in HK. 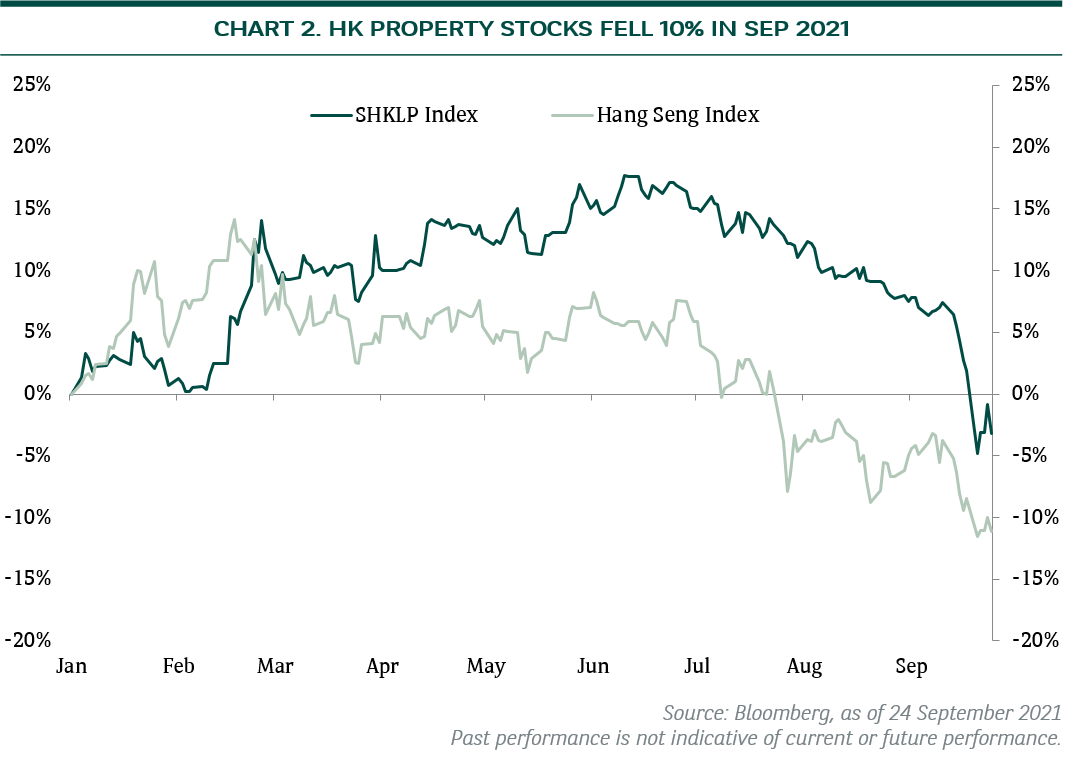 Compromises may be required

In light of the recent regulatory storms seen in various sectors such as China education, ecommerce and property, the worst case scenario for HK developers is as follows:

1. Future Net Asset Value (NAV) growth may fall to zero as developers may be required to sell their residential land bank at cost or below market price;

2. Developers may be required to donate their land bank (especially agricultural land), or the government may take them back.

Future earnings growth of HK developers will heavily depend on their participation in public housing developments with the government and/or semi-government entities. The objective of the HK government is to provide sufficient safety net for the population in need while they are also free to trade the public housing in the private market if they are willing to pay the premium. We envisage some of the developers may reduce exposure to the lower-ROIC HK property development business, which has already slowed down recently along with reduced land supply (see Charts 3 and 4). 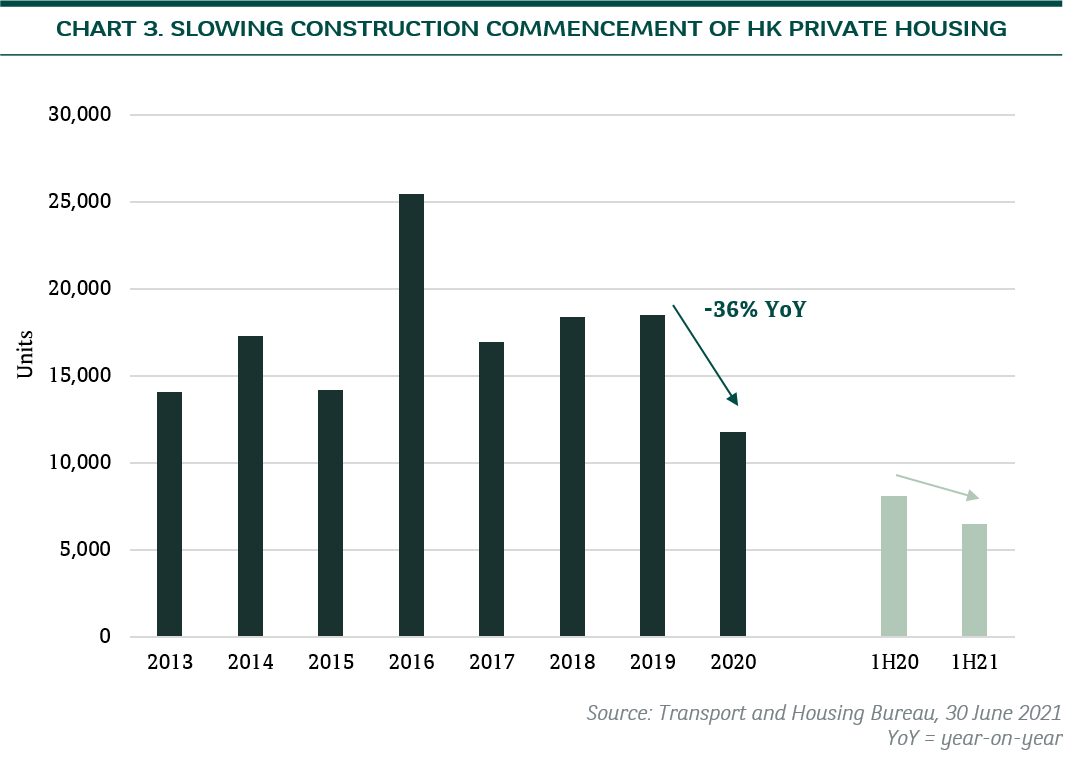 The good news is that most of the HK developers are overcapitalised. The possible fall in earnings per share (EPS) can be neutralised by: i) re-deploying assets in high-ROIC projects overseas; and/or ii) capital management (i.e. share buyback).

Inevitably, policy risk in relation to residential developers has increased and they may instead focus more on investing in commercial properties and/or overseas expansion. Thus a higher risk premium on the overall HK property sector is justified, leading to a general cut in the target prices of HK property stocks.

We are turning more cautious on HK developers with relatively low share buyback capability and those with a larger proportion of agricultural land in their land bank. We prefer developers with lower exposure to HK residential and/or higher exposure to investment properties. In general, from the perspective of asset allocation by fund managers, fund flows will likely switch from HK developers to landlords in the near future. 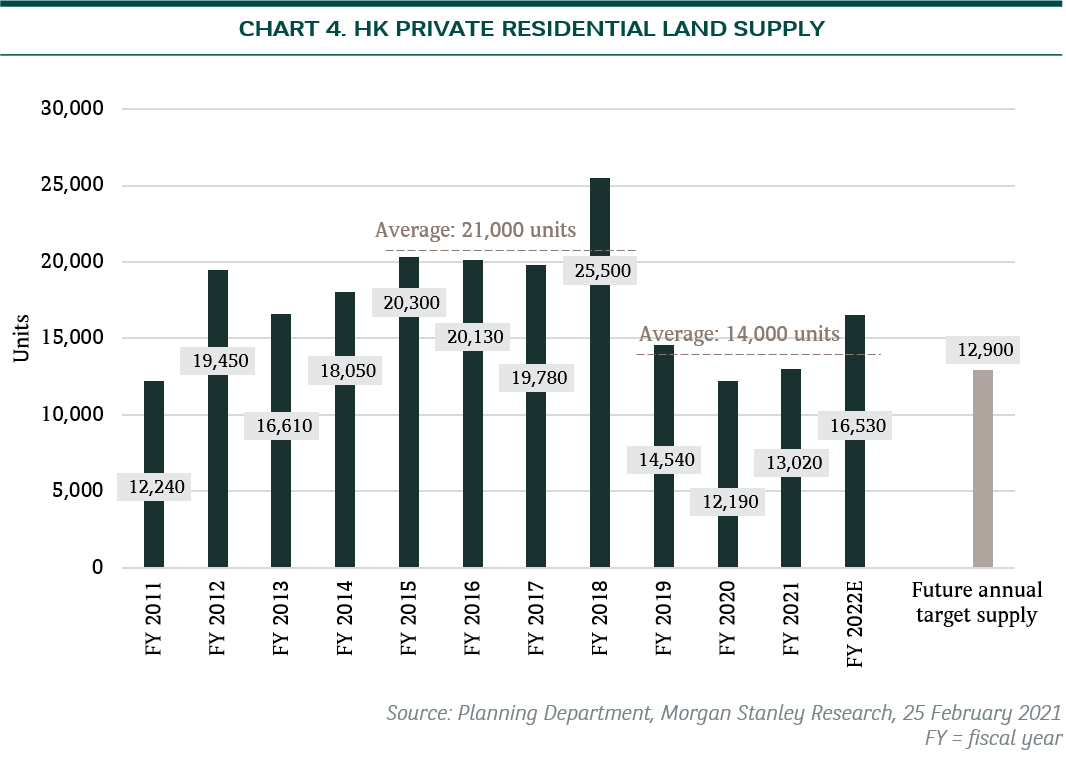