Is a year-end rally still on the cards?
YOUR WEALTH
HAS A VOICE.
LET IT BE HEARD.

2018 Mid Year Outlook: Is a year-end rally still on the cards?

2018 has so far been a tricky year for equity investors. Despite the solid macroeconomic and corporate earnings outlook, most major equity markets, with the exception of the US, failed to reach new highs, amid concerns about global trade tensions and flattening of the US yield curve.

Is such a decoupling, as well as a compression in valuations, an early sign of an upcoming recession, or does it present a buying opportunity ahead of a late-cycle rally? 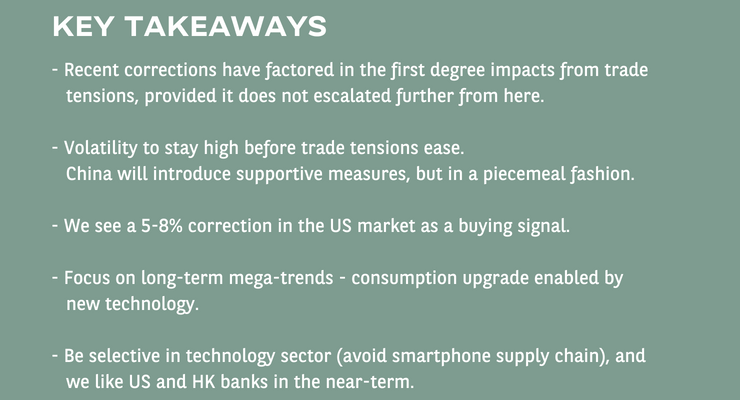 From the macroeconomic perspective, we expect the existing above-trend growth momentum to continue, on the back of:

Of course, the above expectations are contingent on the assumption that global trade tensions do not escalate further from here. On the other hand, we believe the moderated equity valuations have more than priced in the first degree impact from the trade war, which is estimated to cost less than 0.5% GDP.

Summer is usually the typhoon season in tropical Asia. Typhoons may cause major flooding, landfall and disruption of transport services, but fortunately, the impacts are typically short-lived with limited long-lasting damages. In our view, equities markets are in the typhoon season with the on-going trade tensions between the US and China.

US is unlikely to detour

We do not expect any agreement to be reached any time soon. Particularly, we do not anticipate the Trump administration will back down from its current position given the strong outperformance of the US stock market, which has decoupled from the rest of the world, as well as the supports it receives from American voters ahead of the US congress midterm election in November 2018, as evidenced by President Trump’s rising approval ratings.

On the other hand, we do not expect China, which is facing a softer domestic economy, with impact from trade tensions yet to be reflected in macro figures, while having a difficult yet necessary de-leveraging mission on hand, will escalate the situation by deploying drastic non-tariff measures like depreciating the RMB massively or selling US treasuries to rock the boat further from here. It is likely that the Chinese government will introduce supportive measures to offset any negative external shocks and to stabilise economic growth.

Nevertheless, we are cautious not to have too high an expectation about the size and scope of these supportive measures. We believe that the timing and scale of these measures to be introduced will be targeted, gradual, and data-dependant, as de-leveraging and supply-side reform will remain the centre of the Chinese government’s agenda.

That said, the announcement of these supportive measures might not act as significant catalysts to the equity markets.

Instead, the market may be disappointed by the Chinese government’s piecemeal approach.

Looking for the buy signals

We see the current trade tensions not entirely as an economic event but also a political one, ahead of the US congress midterm election in November this year. “It’s the economy, stupid”, an iconic phrase which helped former US President Bill Clinton to win the 1992 election, offers some insights as to when the trade tensions may turn the corner.

As long as the US economy and the equity market continue to perform and decouple from the rest of the world, we expect a modest chance to reach an agreement between the US and other countries in trade conflicts in the near-term.

Corporate tax cuts and the record high share buybacks may be enough to offset the first degree impacts from the trade tensions on the US economy (thus the decoupling and outperformance). However, if import tariffs induce an acceleration in inflation, and trigger a faster and steeper interest rate increase, the US economy and corporate earnings outlook could be impacted.

We see a more material, yet healthy correction of 5-8% in the US equity market as a buying signal which may also prompt the Trump administration to stop escalating the tension further or even back down.

Should we worry about the flattening yield curve?

Under the rising interest rates, the market has been worrying about the flattening yield curve which is often seen as a leading indicator of a coming recession. However, historical data* shows that in the previous cycles, it took, on average, ten months for equity markets to reach their peaks after the yield curve flattened.

We found that the level of interest rates relative to the pace of growth provides a useful barometer of financial conditions, and in turn economic growth prospects.  When the US Fed Fund Rate rises above the US nominal GDP growth, GDP growth is normally expected to decelerate.

The good news is, the gap is standing at 280 bps**, and even if another 100bps interest rate hike and some modest slowdown in the US economy are budgeted in, the gap is likely to stay above 100bps by the end of 2019.

US outperformance to continue

We expect share price volatility to stay high until the trade tensions ease, with heightened uncertainties about corporate earnings outlook putting a cap of equity valuations.

In the near-term, we see a high possibility the US equities will continue to outperform the rest of the world, on the back of their stronger economic momentum and better corporate earnings visibility. However, we find valuations of other markets attractive at the current level, and we expect better entry points in the coming months.

We continue to position China as a long-term investment target, on the back of the strong secular economic growth. We believe a successful supply-side reform, and the gradually inclusion into the MSCI universe, will elevate its valuations in the long-run.

We remain neutral on emerging markets overall, and will stay selective as some currencies exhibit high sensitivity to the US interest rate and economy, particularly those with existing current account deficits.

In terms of sectors, we focus on a few multi-year mega trends, which benefit from secular consumption upgrades, as disposable income reaches tipping points, while improvements in technology have enabled the mass dissemination of such services and products.

A question among investors is whether to take profit from the technology sector, which contributes a lion’s share of the equity market performance year-to-date.

Our short answer is NO, but we would be more selective. We are particularly cautious about the smartphone supply chain due to market saturation and a short-term bottleneck of new feature launches.

We see financials, especially banks as late-cycle favourites, on the back of rising interest rates. We would position in banks in the US and Hong Kong in the near-term, as their net interest margins (NIM) exhibit the highest sensitivity towards the US interest rates.

In the medium-term, we expect banks in Eurozone to catch up in performance when the European Central Bank starts to normalize interest rates sometime in the second half of 2019.