Is It Time to Bottom-fish In the Bond Market Yet?

As expected, the first half of 2018 was challenging for the bond market. Our defensive calls have been effective amidst significant correction. Is it time to bottom-fish yet?

A few key macro concerns including expectations of higher interest rates, Central Banks reducing quantitative easing (QE) measures, heavy supplies and expensive valuations have brought instability to the bond market year to date. Risks of both higher benchmark yields and widening credit spreads have played out but the extent of spread widening is sharper than anticipated. Large scale defaults are not expected generally but as CHART 1 shows, most asset classes recorded negative performance year-to-date. Our defensive strategies mainly focusing on floating rate notes and short-dated papers have proven resilient against this volatile market backdrop. 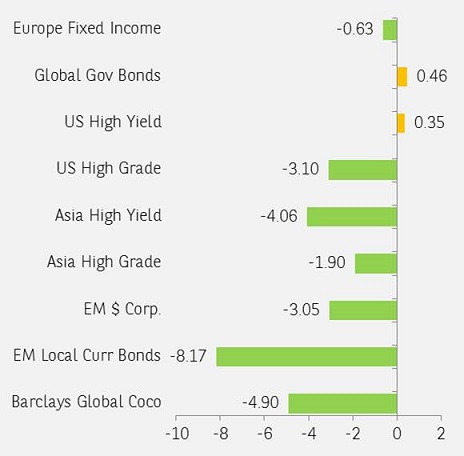 KEY FORCES BEHIND THE MARKET IN SECOND HALF OF YEAR 2018

Demand: There was a huge outflow in Q2 resulting in a negative number year-to-date.  Turnaround of fund flows are possible with a reversal of Central Banks’ policies and USD movement. For Asian credits, the China local bid has been the key source of demand in the past. However, we do not expect such local bids to come back in the near future, given the continued deleveraging process  in China.

Supply: Technical may turn more supportive. We expect slower supply in Q3. Chinese onshore funding should be cheaper than offshore.

WHERE DO WE SEE POTENTIAL OPPORTUNITIES?

After the significant correction in the first half of the year, although downside risk is reduced, the weakening trend may persist in the second half. In the short-term, although we remain cautious on the bond, we start to see value in certain bonds, which we believe is the most important parameter for long-term investors with a hold-to-maturity view.

Over the past one to one and a half years, bond prices have come down significantly which has given some investors the urge to switch some of their equity portfolios back to bonds:-

Given volatility is expected to continue, we think investment grade bonds should be included in core portfolios. For satellite portfolios, USD perpetual bonds issued by top quality banks, insurance companies or blue chip corporates could be considered.  We believe it is time to start locking-in  long-term coupon income. Within the high yield space, benchmark credits with solid operations and liquidity across the region are relatively more attractive.

We are negative towards credits with tight liquidity and potential event risks. It is particularly true for Chinese high yield bonds as some of the weak issuers may become “test cases” for controlled defaults.  Most investors think this will happen in an orderly fashion given there is expectation that the Chinese government would prevent a spill over to the broader economy.

WHAT’S NEXT - THINK THE UNTHINKABLE

Interest rate risk has recently dominated the news. Although we still expect USD yields to go slightly higher, we see less risk when 10Y US Treasury yield trades close to our 12 months target of 3.25%.

Two years ago, the media focused on deflation risk and disinflation scenarios.  All of the structural concerns including ageing population, slow wage growth, less productivity gains in developed markets remain the same. It would be more difficult for G3 countries to hike interest rates given the mounting government and corporate debts. Therefore Central Banks’ terminal rates for the developed market may be much lower than the pre-Lehman levels.

With both higher long-end benchmark yield curves and widening credit spreads, the prices of USD perpetual bonds of top quality issuers fell sharply over the past few months.  Many of these USD perpetual bonds are subordinated bonds, which are cheap, given the wide senior-subordinated spread differential.  Investors could consider accumulating these types of bonds gradually in the next six months. For millennium investors and retirees with longer life expectancy, diversifying part of their portfolios to long-dated bonds, including perpetual bonds could be a way to secure a long-term coupon income. 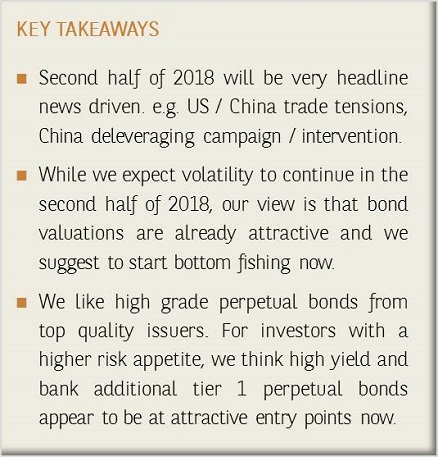