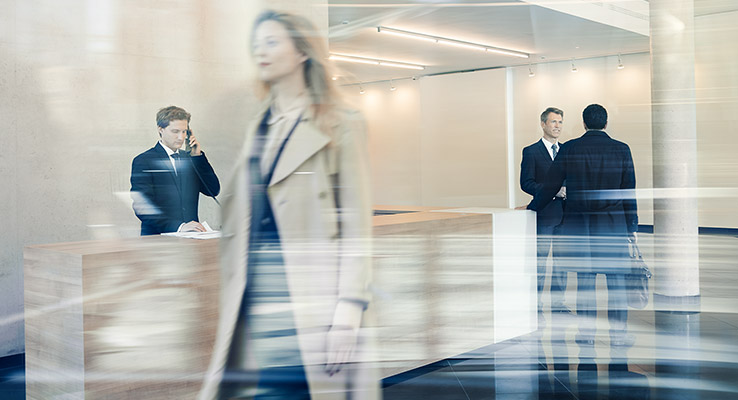 The positive trend of the US dollar reversed in June.

The greenback registered its worst performance of the year, weakened by the shift of the Fed, now focused on sustaining the expansion rather than normalising monetary policy.

We remain bearish on the USD as a number of factors should drive the EURUSD up (stronger EUR). The expected slowdown of the US economic activity should support the downward path of the dollar.

Declining treasury yields dragged down by the dovishness of the Fed  should lead to a lower yield differential and thus weigh on the dollar.

Regarding both the current account deficit and the fiscal shortfall, they should pressure the USD to the downside while the external balance of the eurozone continues to display a sizeable surplus.

Moreover, as a fundamental driver, the convergence towards the fair-value should pull the overvalued dollar down.

The political risk has increased significantly and will remain high over the coming months with politics on Brexit becoming more polarised, the ongoing Conservative Party leadership race, and time running out for the new Prime Minister to negotiate and ratify a deal with the EU before the 31 October deadline.

The most likely new Prime minister should not make things easier as he appears to be quite hostile towards the EU. Therefore risks of a no-deal have intensified.

We see a 40% probability of this to occur. Our base case however, remains a Brexit with an agreement but it will likely be delayed.

We keep our flat targets over the 3 and 12 next months, fluctuating around 0.88.

The Japanese yen followed the upward trend started in May as the dovish central banks and the gloomy global outlook have supported the flight-to-quality.

Despite the fact that the BoJ tilted towards accomodative policy rather than nomalization, a number of drivers support our bullish view for the JPY.

The weakening of the US economy in the coming months should push the dollar down and spur Japanese investors to withdraw their US asset holdings as well.

The overvaluation of the greenback compared to the fair value of the USDJPY should fueled the current downside trend.

Hence, we see a stronger yen than previously expected short term, hovering around 108 instead of 110 over 3 months and we keep our 12-month target at 106.

The Swiss franc kept strengthening against the euro as growing global tensions have undermined Eurozone growth outlook and spurred investors to run towards safe assets.

Moreover, European political jitters pushed the CHF higher. We think that the Brexit outcome and Italian budget discussions will worry markets over the next few months and avoid the euro to regain ground.

Hence, we revised down our 3-month target and see the EURCHF trading around current levels, 1.11 (value of 1 euro) instead of 1.12.

The guideline highlighted over the last central bank meeting late in June was roughly the same than the previous one. The monetary stance should remain in line with the ECB guidance.

The CHF remains very expensive compared to its fair value and this long-term driver endorses a weaker CHF against the EUR.

Moreover, the current environment of low FX volatility should support carry trades and leave the CHF vulnerable if risk appetite comes back later this year.

For these reasons, we continue to see a higher EUR medium term, although we remain aware of lingering political downside risks. Therefore, we keep our 12-month target for the EURCHF at 1.18.

The last inflation prints exceeded the central bank target, the activity seemed to recover as April GDP grow at a higher pace than expected. The labor market remains tight.

Moreover, the Economic Surprise index is more positive in Canada and suggests an improvement of the economic situation. We keep our 3-month target at 1.30 (value of 1 dollar). The increasing probability of US interest rate cuts suggests an ongoing shrinking of the bond yield differential.

Regarding oil market, our target range suggests higher prices over the year, supportive for the CAD.

On the trade side, the US-China conflict and the still not-ratified USMCA trade deal remain the main downside risks. We maintain our 12-month target at 1.28 as we see an appreciation potential for the CAD. 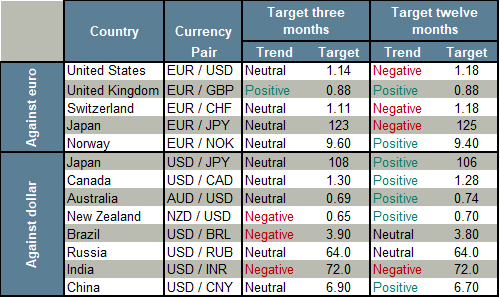