More Upside For The US Dollar
YOUR WEALTH
HAS A VOICE.
LET IT BE HEARD.

More Upside for the US Dollar 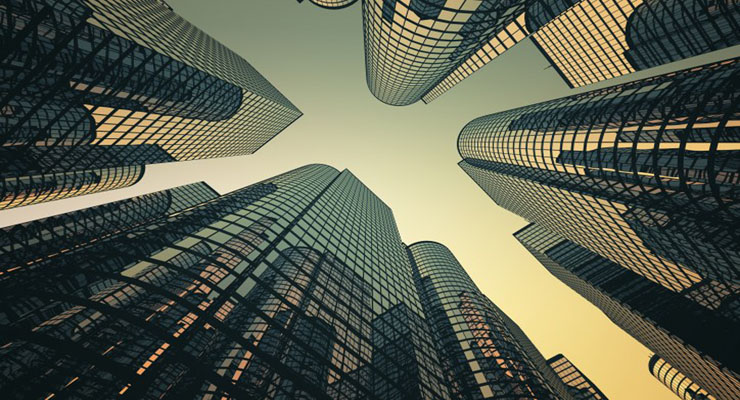 "After the election of Mr Trump, the USD appreciated.

The new US economic outlook and rate expectations suggest a stronger dollar."

Since the victory of Mr Trump the dollar has appreciated sharply to reach 1.055 (value for one euro) on 9 December, an unprecedented level since January 2003.

The outlook for the US economy and for interest rates has improved further, and expectations suggest a growing difference between US and European interest rates and thus a stronger dollar.

Looking at the long-term fair value (Purchasing Power Parity), the dollar is already expensive and we think that parity will not be reached.

The dollar started the year at 1.09 (value for one euro) but the US currency lost some ground over the first few months. The value for one euro rose as high as 1.15 in early May as expectations of the US central bank hiking the policy rate were revised down.

Since then, probabilities of rate increases by the Fed have been gradually revised up, allowing the dollar to make a gradual come-back. Since the victory of Mr Trump on 8 November, the outlook for both US economic growth and interest rates has improved further, and expectations suggest a growing difference between US and European rates. This has supported the dollar which appreciated to 1.055 (value for one euro) on 9 December, i.e. a 4.3% appreciation in 16 days, a level not seen since January 2003.

The dollar was in overbought territory from a chart analysis perspective at the end of November (Relative Strength Index). December).

Thus, a correction occurred, with the dollar depreciating to 1.07. The dollar has resumed an upward trend (1.055 on 9 December).

Key reasons for the dollar to rise further

The main reason why we expect the dollar to appreciate further is the expected increase in the interest rate differential between the US and Europe.

A useful indicator is the 2-year government bond yield. Indeed, it reflects the forecasted path of interest rates of a central bank. For the Fed, we expect one rate hike this year, two in 2017 and three in 2018. In Europe, the ECB is expected to leave its target interest rate unchanged for the coming two years. This differentiated path has already partially been priced in, but we expect a further upward move in the 2-year yield differential in the coming months (see chart). This is a key supporting factor for the dollar against the euro.

Finally, we expect a more favourable environment for the repatriation of cash by large US companies that Mr Trump will create as a supportive factor. However, the effect on the currency could be limited as a large part of corporates’ foreign earnings are held in US dollars, and non-USD-denominated cash might be kept for foreign operations. 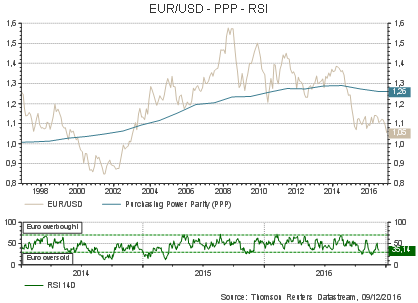 The dollar should be impacted upwards by:

A number of forecasters have mentioned the perspective of breaking the parity (one euro for one dollar). We do not share this view. To understand why, let’s take a look at the economic theory and long-term estimates.

The most common medium-term fair-value indicator is the so-called “Purchasing Power Parity”. In simple terms, this theory is based on the assumption that identical baskets of goods (usually the one used for the consumer price index) should be sold at the same price once they are converted into the same currency.

The fair-value exchange rate should show equal price levels in a given currency. Even though the logic is straightforward (if a basket is cheaper in one country, rational consumers would all buy the basket there) transport costs and differences in the composition of baskets may explain why some differences will persist over time. Most economists agree that even if the exchange rate may diverge from the PPP temporarily, some form of convergence should occur. This is especially true when the divergence becomes extreme.

Currently, one of the most used PPP estimates is the one calculated by the OECD. Its current estimate is 1.26 dollar against the euro, vs. the current level of 1.055 (9 December). This suggests that the euro should be worth 1.26 while vs. only 1.055 today. The dollar is thus overvalued based on this theory (see chart).

In the event of a sharp appreciation of the US dollar, the ECB and the Federal Reserve would probably intervene through an oral statement.

To conclude, even if we have seen parity, and even lower levels, in the period 2000-2002, current PPP estimates clearly suggest that the dollar is already expensive and we think that parity will not be reached in the coming year. 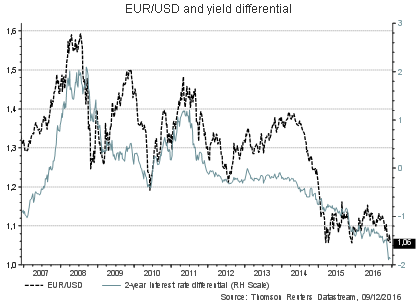 The dollar is already expensive according to PPP.

Parity will not be reached.