Inflation, Stagflation, Debt Ceiling Concerns – How to Position?
YOUR WEALTH
HAS A VOICE.
LET IT BE HEARD.

US Equity Markets – How High Can It Go?

The S&P 500 has had a 5% correction since September after 300 days without a 5% correction. This is the longest period in 15 years. Low interest rates, record earnings beats, cyclical recovery, and vaccine roll-outs have underpinned the market.

How long can the easy financial conditions last? After the recent FOMC meeting, the Federal Reserve is likely to announce tapering in November. In addition, our first rate hike expectation has been moved up by a quarter to 4th quarter 2022. Overall, we believe it will be a “tantrum-less” taper as the Federal Reserve is telegraphing well in advance their intent, unlike in 2013. Real rates still remain negative, nevertheless some volatility is possible.

In addition, the US Senate approved a bill to extend the debt ceiling through 3 December, but the delayed debt ceiling fight could add some volatility in coming months.

(1) The Democrats pass the debit limit along with their budget spending proposal of $3.5 trillion. Critically, the US budget is currently under Democratic negotiation between moderates and progressives. This $3.5 trillion number will come down but can it be done in tandem with a debt ceiling raise?

(2) The Republicans join the Democrats to pass the extension. At the moment, this seems unlikely, as the Republicans would like to show their disdain for the large spending program of the Democrats. However, when push come to shove, they could acquiesce closer to the deadline.

(3) Democrats pass it separately from the budget reconciliation bill.

Our base case is an extension of the limit and any volatility likely is a buying opportunity. The ceiling has been extended 78 times since 1960. The US has not in the modern era ever had a delay in a coupon payment. This is a low probability, high impact event. If it does occur, the rating agencies may lower the credit rating of US sovereign debt, causing volatility in bond and equity markets. For this very reason, a deal is normally achieved by one or both parties. Nevertheless, it could go down to the wire and spark some market volatility.

What About Surging Power Prices?

European and Asian natural gas prices have surged. In Europe, the increase in natural gas prices has been caused by a prolonged previous winter, and lack of LNG cargoes over the summer led to tight supply conditions. This was aggravated by poor domestic production and lower supplies from Russia. In China, electricity demand has increased double digit due to robust exports and coal supply by just 5%. As a result, natural gas as an alternative fuel has rocketed in price.

Also, rules to lower energy intensity may have to be loosened temporarily. Other measures to rectify the situation include state-owned companies could acquire coal/natural gas, subsidies to electricity producers, and rationing of power intensive sectors like cement, and steel. This will likely cause some disruption into year-end and fade by early 2022. The resulting downgrade to China for 2021 GDP is 0.3 – 0.4% as a base case. Winter is Coming!

What about higher oil prices due to more demand because of substitution from natural gas? There is no lack of crude oil in the world but the OPEC+ tight supply management and the disruptions due to hurricanes in the gulf of Mexico has pushed Brent prices above 80$/b. Prices should revert to the $70-80 range in the medium term.

However, in the short-term it could eclipse this range. The weather is a key unknown variable, a cold winter could result in further spikes in oil and natural gas, and a warm winter will lead to a faster normalization of prices.

The higher yields, inflation expectations, as well as steepening yield curve since the FOMC meeting favours selected cyclical/value sectors. One such example is EU energy companies, which have 15% free cash flow yields, attractive dividend yields, trade at a 50% discount to the market. Also, financials have benefitted from higher yields, and can now return capital via dividends and share buyback, while trading at an attractive valuations. 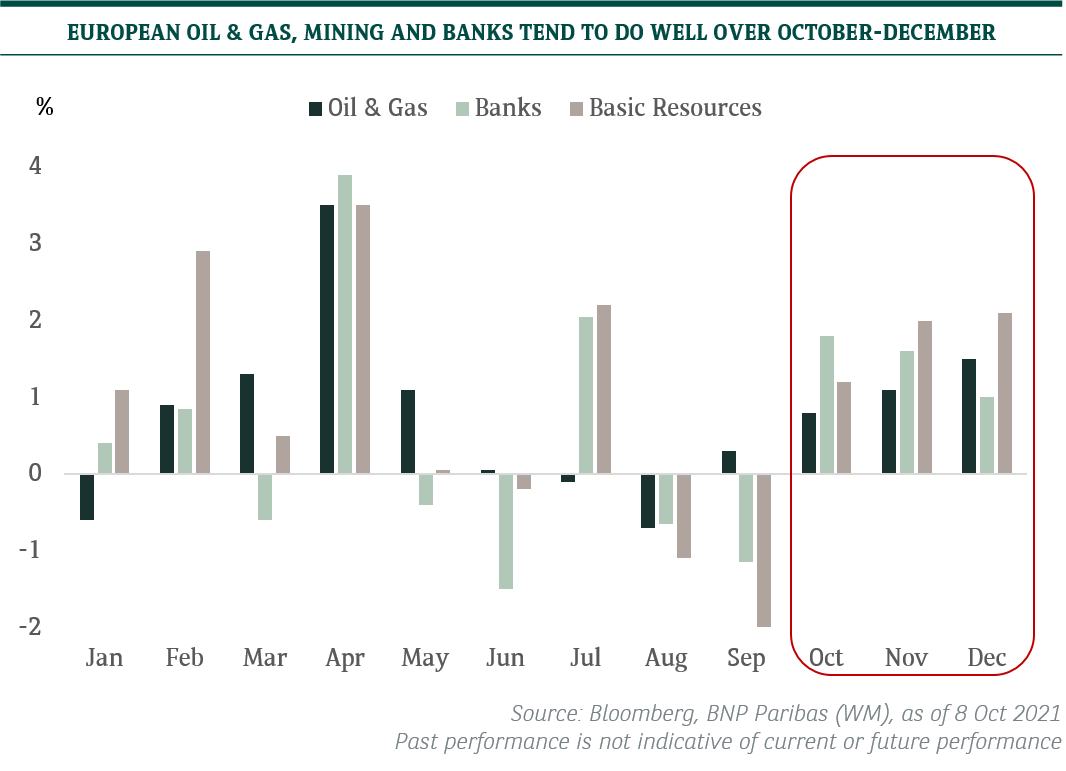 Geographically, both Japan and European indices have a high cyclical weightings. Investors can look towards these two markets as an alternative to US or China shares, particularly since majority are still underweight in these regions. European equities will likely benefit from rising yields and domestic reopening as consumption continues to improve with strong vaccine roll-out. Valuations are at a 30% discount to US equities, with attractive dividend yields and strong earnings momentum. Europe also has world-class multi-nationals and leading exposure to ESG trends.

For Japan, on the political front, the country has a new Prime Minister, which will likely lead to additional fiscal easing. At present, Covid restrictions are fading, which can aid the country in reopening. The currency also remains weak, while valuations are still attractive at nearly a 40% discount to US equities. 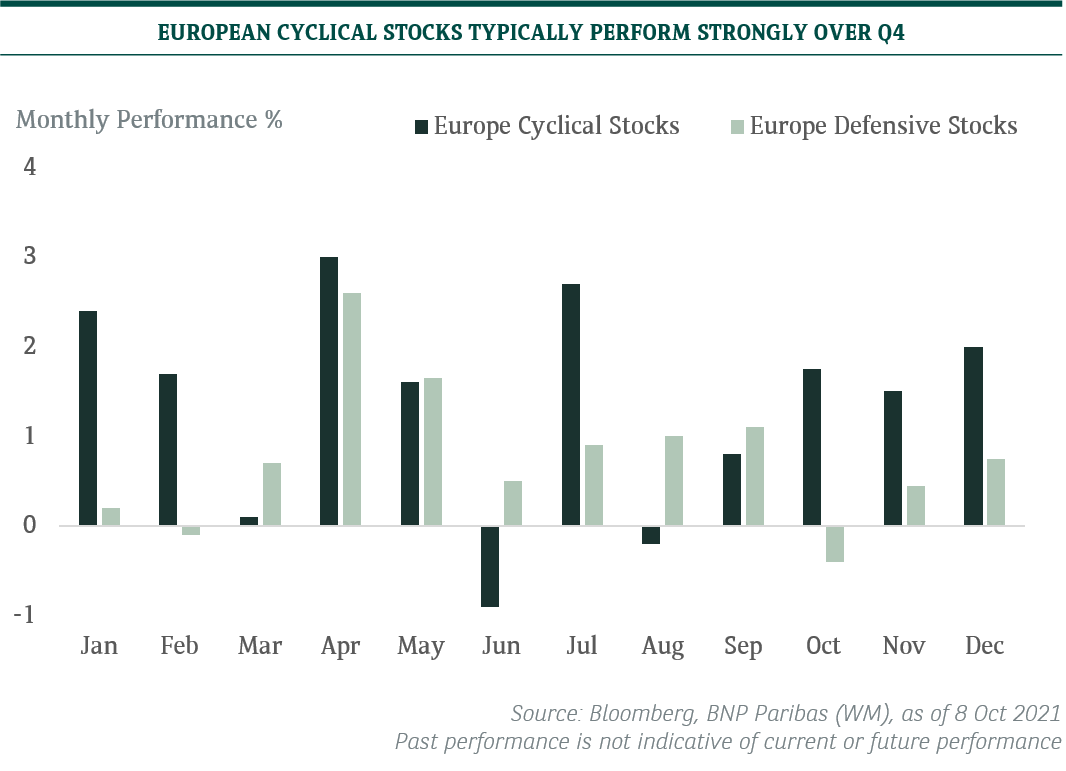 In addition, at the beginning of September, one of our themes we reiterated is on Real Assets (click here to read more). We continue to advocate greater exposure to real assets with positive after-inflation yields, and continue to see attractive income and diversification benefits from exposure to infrastructure, real estate and commodities.

US equities have had a 5% correction since September after more than 300 days without a 5% correction, the longest in 15 years, hence a correction would actually be healthy. There are uncertainties such as the debt ceiling extension, rising commodity and power prices due to shortages of coal and natural gas.  Our base case is the debt ceiling extension will eventually be agreed. The rising power prices are likely here to stay for several quarters with the winter period being crucial if it gets better or worse.

Post FOMC meeting, a steepening yield curve (as we expected) and higher yields provide opportunities in the EU energy and financials. Geographically, both Europe and Japan have superior valuation upside, higher cyclical component aided by higher yields, and catalysts for relative outperformance.  We maintain our positive stance on global equities and real assets (inflation hedge), namely commercial real estate and global infrastructure. We are buyers of dips.

We expect an announcement on the Fed tapering in 4Q, with implementation in December this year. The US 10y treasury yield is likely to rise, and we target 2% in 12 months, while retaining our negative stance on government bonds.

Read September Issue of Investment Navigator :  What to Do After the Recovery?

Overview of our CIO Asset Allocation for October 2021 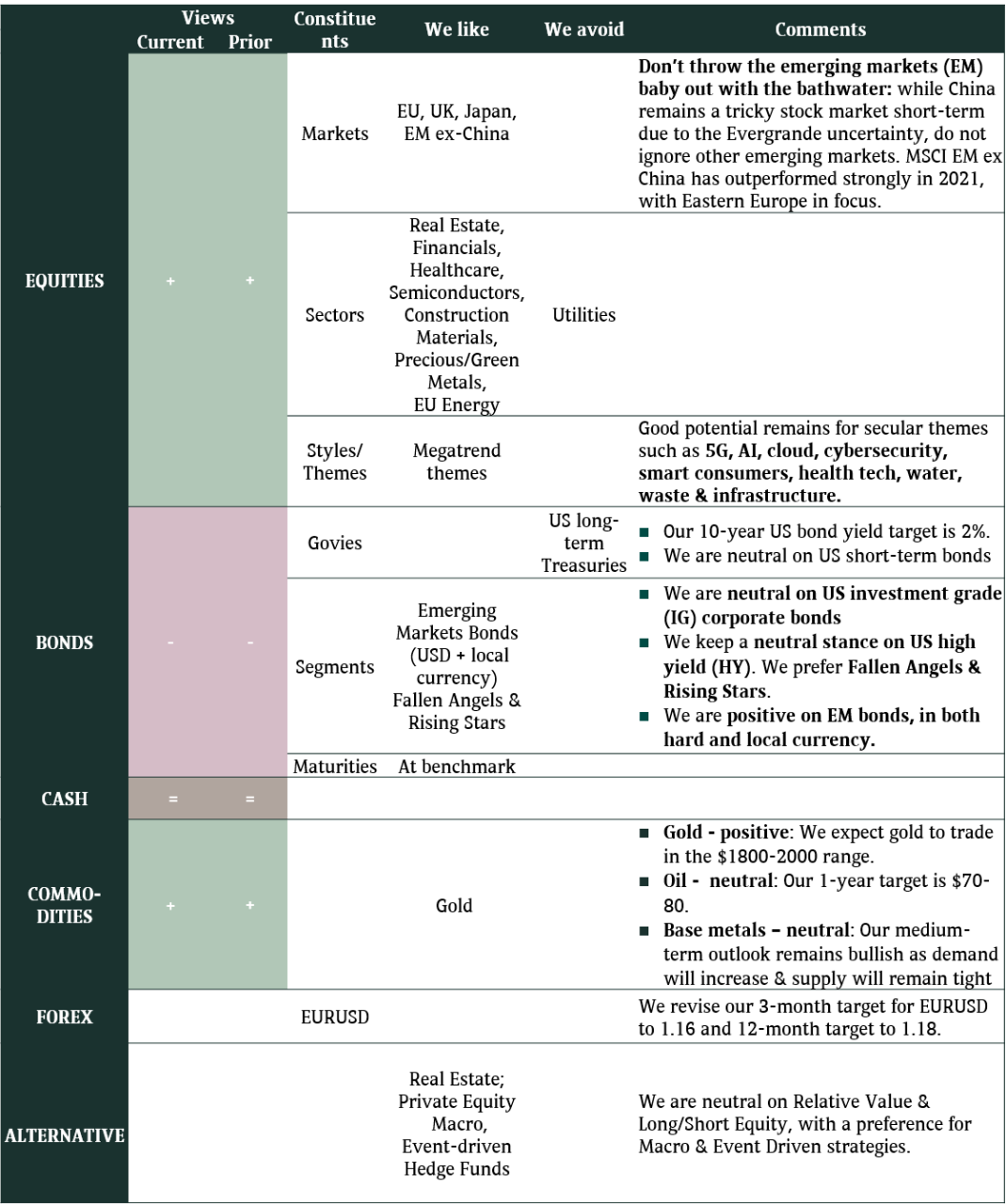 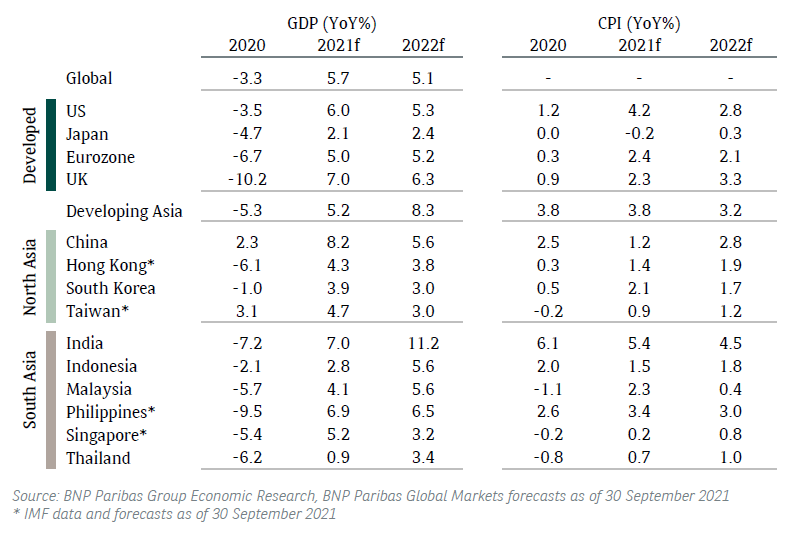 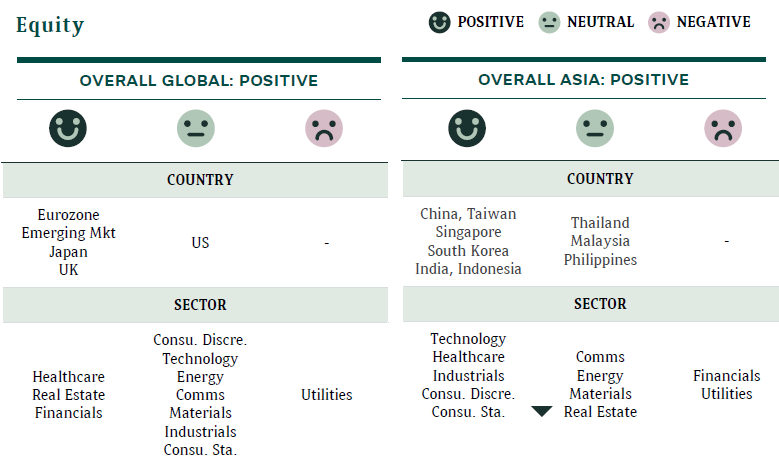 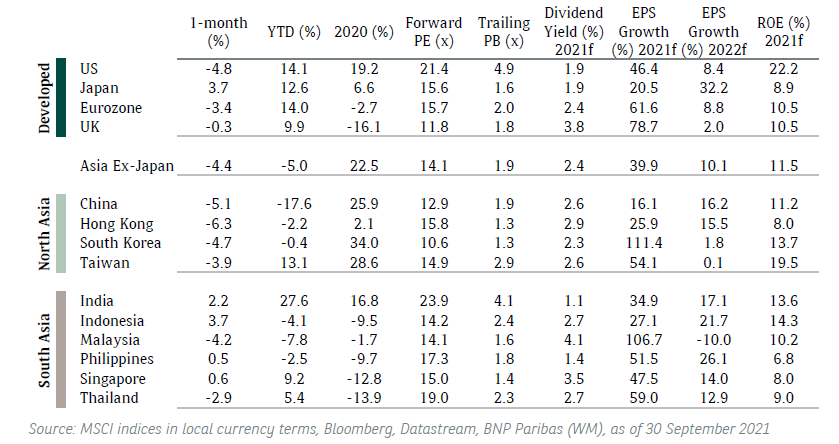 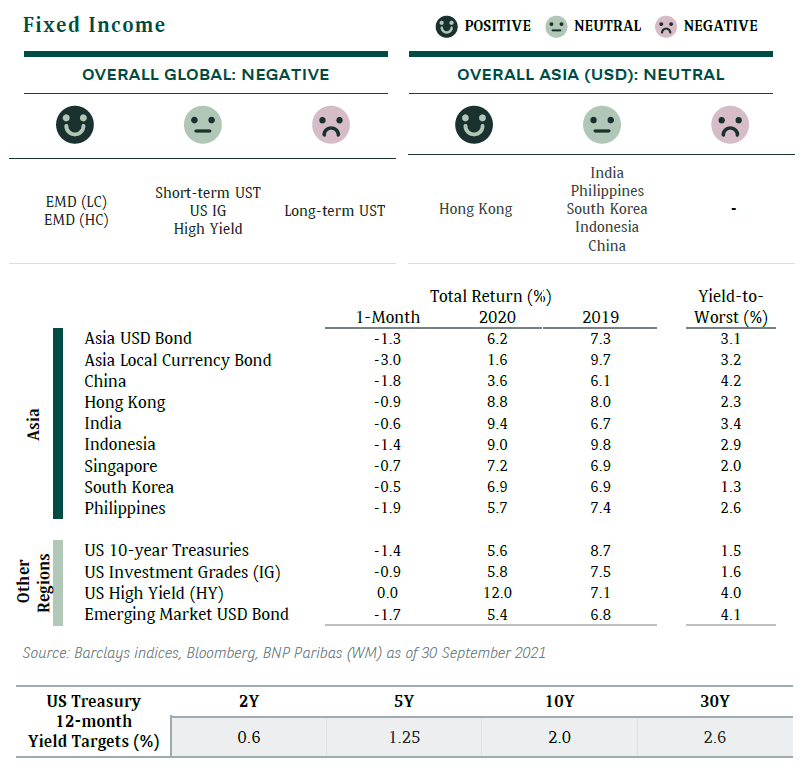 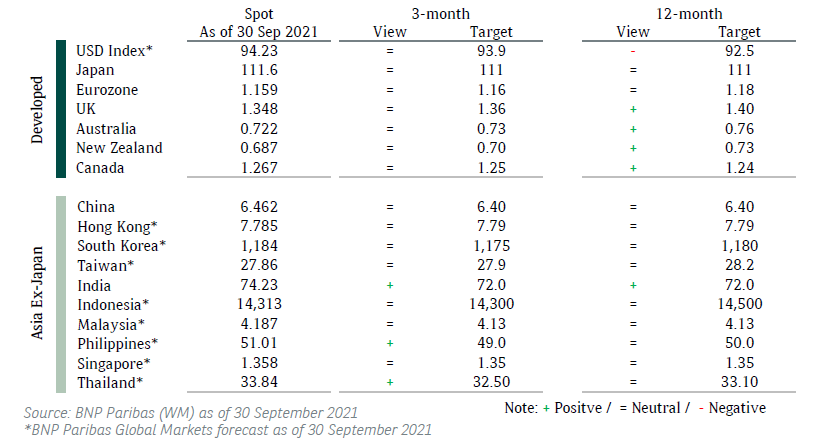 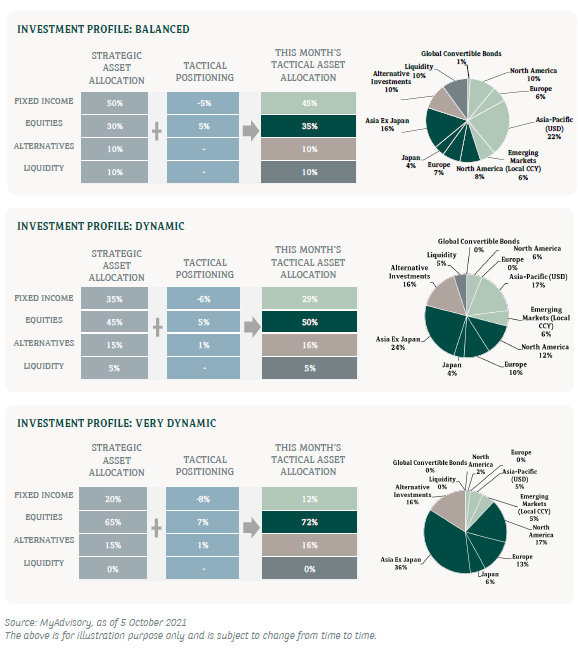 Yield Curve: What Is It Telling US?