Revisiting EM asset class Come for the Carry, Stay for the Growth
YOUR WEALTH
HAS A VOICE.
LET IT BE HEARD.

Revisiting Emerging Market Asset Class: Come for the Carry, Stay for the Growth!

The growth of EM countries has been subjected to a downtrend since 2011. Growth prospects were dragged down by the uncertainty in the Chinese economy and also the collapse of commodity prices. After Trump’s election, the market was concerned about protectionism and the use of aggressive fiscal policies which could drive US interest rate higher. EM was under pressure as most of these countries are export oriented and with US interest rates expected to move higher, these economies would suffer from tighter liquidity conditions.

On the contrary, the protectionist rhetoric from the Trump Administration has declined since he took office and commodity prices have stabilized. In addition, the expectation of a faster rate hikes in the US were scaled back somewhat after the Fed’s “dovish hike” in March. Furthermore, the fear of a dip in Chinese growth was averted after a surprise on first quarter’s GDP figures. Overall, the finances and balance of payment conditions of EM countries have improved in the recent years.. 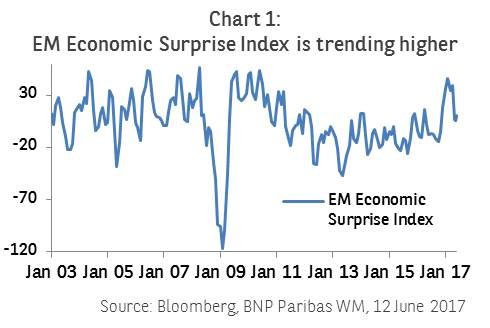 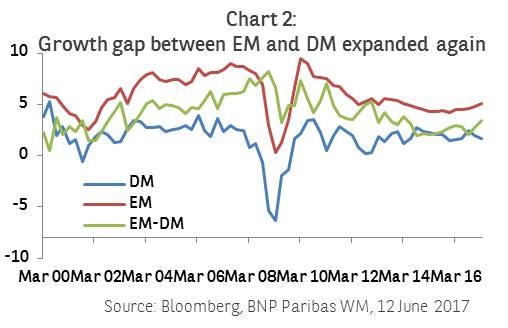 The EM economic surprise index levels are clearly at a level higher than the 2011-16 period (Chart 1). In fact, the recent published macroeconomic data are trending better for emerging market (Chart 2). EM economic growth is also accelerating versus DM.

Fund flows data (Chart 3) are also supportive and YTD inflow is one of the strongest in the past 5 years. 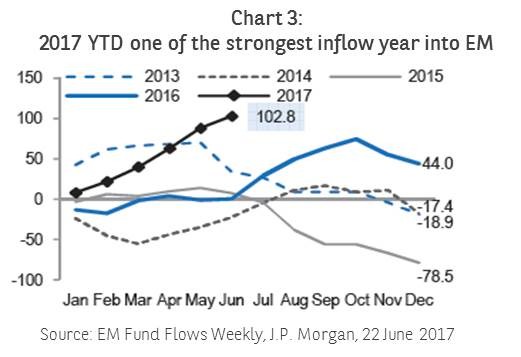 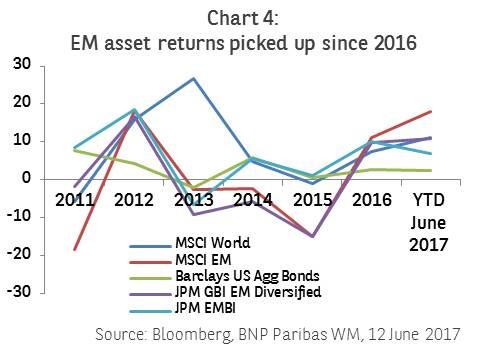 Against this backdrop, since 2016, EM asset returns outpaced the developed world (Chart 4). With developed markets economic growth brightening up the more export-centric and commodity based EM world, we should continue to ride on such positive trends.

The EM local currency asset class offers over 6% carry, and in a yield starved world this is significant (Chart 5 & 6). It will also help reduce the impact of the rise of the USD which we forecast. We turned positive on EM local currency debts in May, while we remain neutral on EM hard currency bonds. As inflation is forecasted to fall this should allow central banks to cut rates, especially for Brazil, Russia, South Africa, Chile and Colombia. The recent scandal about the Brazilian President has not been contagious. The resilience of Brazilian sentiment can be reflected by the recent rate cut (early June) while the move in Brazilian Real was very modest. 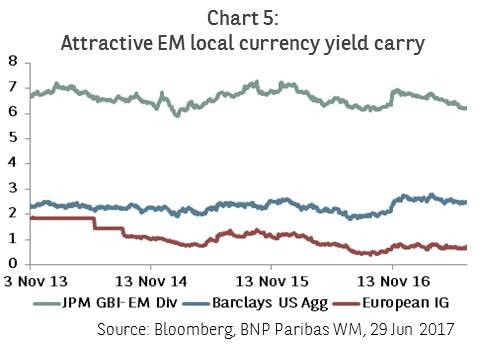 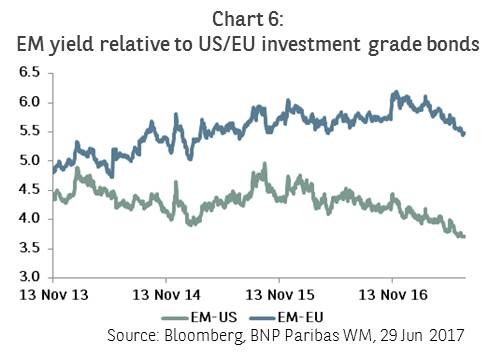 We are positive on Asian equities, in particular via China and India, even though we maintain an overall neutral on EM equities. Year to date, the overall performance was stronger than expected, aided by the bottoming of negative earnings revisions. Our view is to increase exposure, especially if there is a market correction.

The China factor will also be closely monitored as it has the largest influence on the EM story. The upshot is that China growth has been holding up after the surprisingly strong 1Q17 GDP. While we expect China growth to slow, the good news is that the transformation in the economy continues as the service sectors continue to expand and have already surpassed the industrial side of the economy. We continue to advocate investors to invest in China via “the new economy theme”.

India is expected to be one of the fastest growing economies in the world for years to come. Prime Minister Modi won in a landslide manner from a closely watched elections in India’s most populous state, cementing sentiment on policy progress. Another attraction of India is that this it is a country relatively insulated from evolutions in the rest of the world economy. This is always a good factor in the construction of portfolios as it brings de-correlation.