US China Trade Deal: The “Phase One” Trade Deal: Why It Matters?
YOUR WEALTH
HAS A VOICE.
LET IT BE HEARD.

US China Trade Deal - The “Phase One” Deal: Why It Matters?

What's likely to be included in the deal? What are the possible economic and investment implications?

The prolonged US-China trade tensions not only have hurt both US and China economies, but also deepened uncertainty, eroded business confidence and jeopardized global growth.

In fact, trade tensions have cost the global economy about 1.2pp of growth over the past 18 months. Therefore, it was not surprising to see both sides reaching a trade truce in October especially when there is still a remote distance to reach the comprehensive agreement.

The trade talks in October represents a breakthrough, as some progress has been made towards a potential “phase one” trade agreement which may be signed before the end of this year.

While the items were not new on the negotiations agenda, it is a positive step that the two sides are able to pick some low-hanging fruits and “lock in” some gains.

What will (likely) be included in the “phase one” deal?

·        China offers substantive opening up of its financial services market

·        A “currency pact” - US Treasury Secretary hinted that the currency agreement could be similar to Chapter 33 of the USMCA (US-Mexico-Canada Agreement) that it would entail both sides committing to market-determined exchange rates, denouncing competitive devaluation and disclosing monthly interventions (US may remove the currency manipulator label on China)

What are the economic impacts of the “phase one” deal?

It gives a breather to the companies that have been hit by tariff threats. Suspension of tariff hikes in October and potential suspension in December are estimated to benefit 4Q GDP by 0.1pp and 2020 GDP by 0.3pp from the exports channel.

With the worst case scenario being avoided for now, it certainty reduces the risk of a global recession in 2020.

However, the “phase one” deal is unlikely to lead to a restart of capex spending quickly as end demand will have to pick up and lift capacity utilization before capex cycle revives.

Without a full trade agreement, it would be difficult to revert capex to pre-2H18 levels.

China’s agricultural purchases are enormous, but it is mutually beneficial. On one hand, this will help ease China’s CPI inflation pressure due to a severe pork shortage.

More soybean imports are needed to resume domestic supply of pork. On the other hand, this will help US farmers and ease political pressure on President Trump. 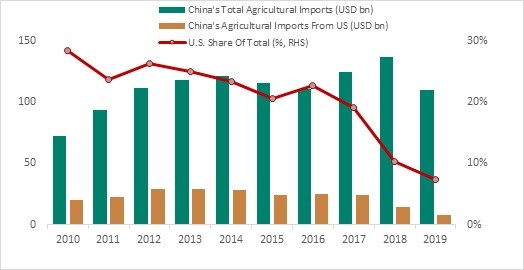 China’s imports of US agricultural products will be mutually beneficial

Market expectations of a ceasefire has been positive for the RMB. The local currency has appreciated 3% against USD from its trough in early September, as a result. With expectations of tariffs rollback in phases, we could see further appreciation of RMB in the near term.

A trade truce helps China to buy time for economic transition. In fact, China has been making some progress in structural reforms, such as passing new foreign investment law that banned forced technology transfers, revising rules to improve intellectual property protection, reducing subsidies in some industries and announcing a new accelerated timetable to further open up of its financial services.

Nevertheless, there is still risk of a breakdown once talks move on to highly contentious non-trade issues related to technology transfer and national security.

Our base case scenario is that the US-China tensions will stay, spilling over from trade to technology and potentially the financial market. The US has expanded its trade blacklist to include some of China’s top artificial intelligence startups.

There are also proposals to restrict US investment in Chinese companies. With US-China tensions still matter a great deal to the global economic outlook, we only expect a mild global economic recovery in 2020.

What are the investment implications of the “phase one” deal?

Despite the lack of resolution on the major issues, the “phase one” deal, together with the reducing risk of a “no-deal” Brexit, as well as the economic backdrop of global monetary easing policies and expectations of more fiscal policies, investor sentiment has improved significantly recently.

As global leading indicators are stabilizing and the US yield curve is no longer negative, fears of recession remain premature, assuming the political background will not deteriorate significantly from now.  Furthermore, global investors are still cautiously positioned, which is a good contrarian indicator.

A lot about the “phase one” deal may have been priced in given the recent rally, while any dips are good opportunities to add risks to the multi-asset portfolios. We have upgraded global equities from neutral to overweight with a positive stance on US, Eurozone, UK and EM.

Crucially, after an overly pessimistic 4Q 2018, we were overweight equities at the beginning of the year, capturing the strong markets returns in the 1st half of the year.

After taking profits and turning cautious at mid-year 2019 we upgraded US equities at the end of August after their correction before moving back to overweight global equities this month.