First Reaction on US Elections 2020: Déjà vu? Or Blue Wave…
YOUR WEALTH
HAS A VOICE.
LET IT BE HEARD.

First Reaction on US Elections 2020: Déjà vu? Or Blue Wave…

Presently, President Trump’s road to the White House depends critically on winning the battleground states. Ahead of the election, while Biden led in the national polls by 8%, double the percentage of Clinton in 2016, the swing states critically narrowed to within the margin of error ahead of the election. For the US Presidential Election, it is a winner takes all by state mechanism.

As of 2pm SGT, HKT, 7am CET, the overall battle for swing states has President Trump leading in many of them, with the exception of Arizona. However, the results are not nearly complete in many of these states.

The road to the White House is paved via these selected battleground states. Thus far, President Trump has been more competitive than the polls suggested initially. This has some echoes of 2016, as Trump is the projected winner in Florida, Ohio, and Iowa. In terms of comparison, Trump led Florida by +0.2% before the 2016 election and won the state by  +1.2%, illustrating a +1.0% pickup relative to the polls. In 2020, it seemed like a close call with Biden leading +0.9% before the election, although President Trump presently leads by 3.5%, illustrating a pickup of +4.4%.

Trump’s strong showing is likely due to a strong turnout on the day of voting, somewhat blunting Biden’s advantage given the number of mail-in votes casted early. However, important to note, counting of mail-in votes in a key state Michigan starts one day before election, while Pennsylvania and Wisconsin only starts on the day of elections itself. In addition, there are a number of lawsuits around extending the deadline for mail-in votes by three days in Pennsylvania.

Interesting, Pennsylvania has already stopped counting mail-in votes for the night. Hence, it is becoming unlikely we will receive an official result later today. The key question for today will be if it is possible for either candidate to win the election without winning Pennsylvania this evening.

It is increasingly likely to be a close election again and critically, and as mentioned before, mail-in votes may not be fully tabulated in the remaining key swing states today. Hence, we could still see President Trump’s lead narrow in these states as the day progresses. Ultimately, due to how close the votes are, it is still too early for a result to be called. Mail-in vote counting may still turn the tide for Biden. 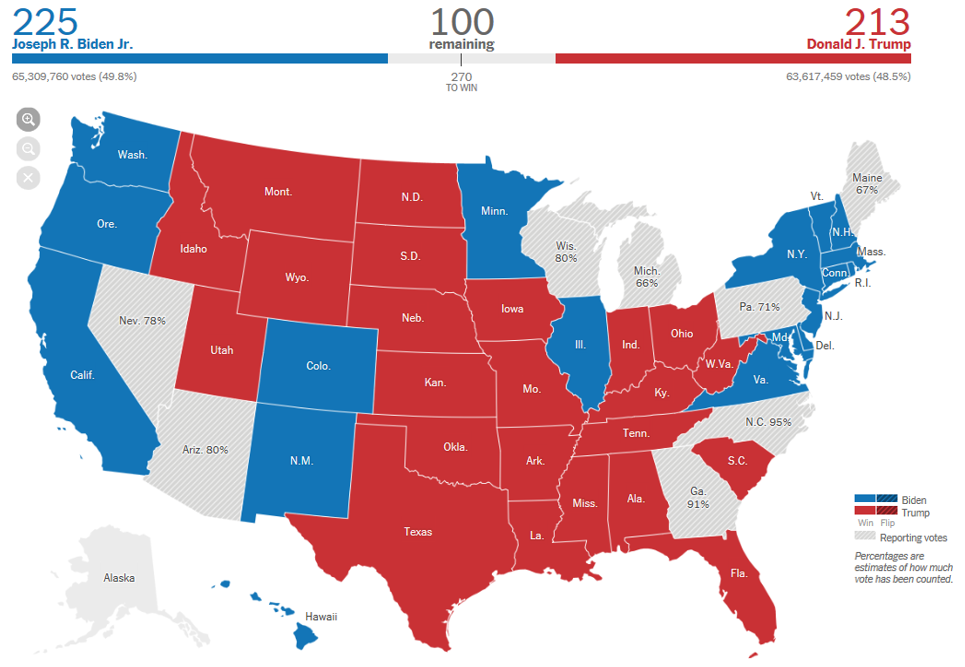 What about the Senate Race?

The five key races to watch for Senate control will be in Arizona, Maine and North Carolina. It’s also worth noting that in Georgia, one of the races is a special election in which numerous candidates are running from both parties (no primary election took place) and none are expected to get the 50% + 1 votes needed to avoid a runoff under Georgia rules. The other Senate race in the state is also very close, with a chance of a third-party candidate keeping the winner under 50%, triggering a runoff as well. Those runoffs wouldn’t take place until January 5, so in the event that control of the Senate were not clear, then majority control could come down to runoff elections in a single state in January. This has not been widely discussed.

What about the House of Representatives?

The Democrats have already retained the House of Representatives as expected. However, the number of seats is too early to call for their majority.

The market had a “Blue Wave” trade on the last few days:

As it has emerged the President is more competitive than the polls suggested, we have seen S&P 500 futures fluctuate over the morning, with presently a rise of +0.6%. In addition the Nasdaq futures are +2% after being up as much as +4% earlier. This is perhaps due to a close election thus far, and hence, lower chance of major changes in regulation. The interesting move is in Treasuries where yields have been rising, in anticipation of a Blue Wave and reflation.

As the race is close so far, this has reversed somewhat this morning with the treasury yields dropping with the 10-year Treasury yield down circa 4 bps to 0.81%. The dollar has strengthened by +0.5% as well after strengthening nearly 1% earlier in the day.  This situation remains fluid and the remaining swing states will be key to the election outcome.

Summary Of Post-election Scenarios: Focus On Policy Not Politics