US Equity Perspectives - Welcome to the Metaverse
YOUR WEALTH
HAS A VOICE.
LET IT BE HEARD.

Welcome to the Metaverse

Welcome to the Metaverse

What is the Metaverse?

The word Metaverse literally means a universe beyond the physical world. More specifically, it refers to a computer generated world, a fully immersive three-dimensional digital environment, with shared 3D spaces. It describes the concept of a future iteration of the Internet, the ultimate virtual reality, and a digital world to which anyone can connect.

Key elements of the Metaverse could include virtual identities, social networks, immersive experiences, diverse content (e.g. entertainment, gaming, lifestyle, education, financial services, etc.), being easily accessible anywhere and anytime, having a functioning economy and a virtual civilisation, and so on.

Many of these new virtual platforms will likely be powered by blockchain technology, using cryptocurrencies and non-fungible tokens (NFTs) as a medium of exchange, allowing a new kind of decentralised digital assets to be created, owned and monetised.

How far along are we in the development of the Metaverse?

At the current stage, we think the Metaverse can broadly be broken down into two distinct types of platforms.

The first centres around building a blockchain-based Metaverse, using NFTs and cryptocurrencies. Examples would be platforms like Decentraland and The Sandbox, which allow people to purchase virtual parcels of land and build their own environments.

The second group relates the Metaverse to virtual worlds more generally, where people can meet up for business or recreation, such as gaming platforms where users can compete/collaborate in games as well as creating their own games.

How big is this market and which companies stand to benefit?

We expect the Metaverse to create wide-ranging opportunities across multiple verticals, particularly for companies which develop virtual platforms and their components. ARK Invest estimates that revenue from virtual worlds could approach USD390 billion by 2025, more than double the approximate USD180 billion in 2021 (see Chart 1). 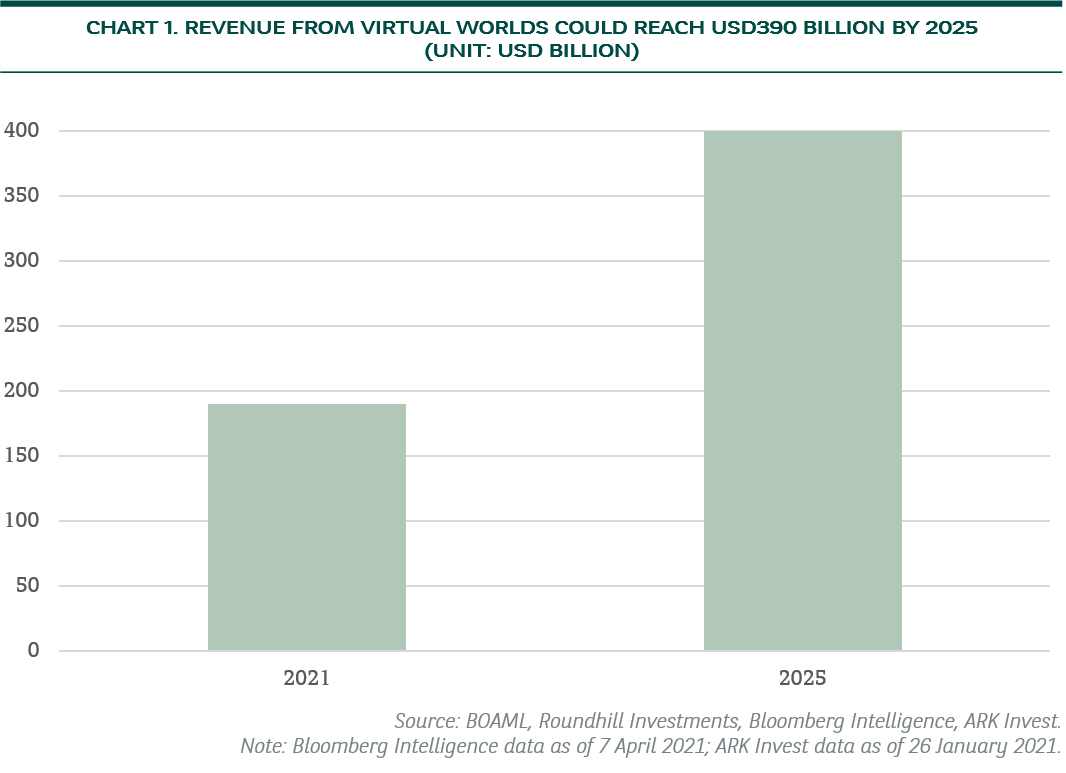 Key beneficiaries would be companies operating in the following sectors – social media, ecommerce-related, payments, augmented reality (AR)/virtual reality (VR), video games/interactive entertainment, as well as companies which build the infrastructure that the Metaverse runs on.

Ultimately, this new iteration of the internet will have massive implications for not just businesses, but also the broader society.

The Metaverse is often mentioned together with games, as games are closest to the Metaverse in its current form for several reasons – players have a virtual identity, and video games offer a more immersive experience vs. other platforms. Many key franchises by major gaming companies already have highly social, immersive virtual worlds, brand crossovers, and early beginnings of a virtual economy. Esports will also likely be a natural extension of the Metaverse, benefitting video game companies.

Advancement in technology is helping to transform 2D web content into fully immersive, holographic 3D experiences. Through software, users are able to play games with one another and socialise in hang-out spaces completely in VR. For example, a major social media company recently launched a VR-led solution that allows users to join collaborative work spaces virtually.

We are also seeing new experiences being made available on some of the most innovative platforms. An example would be mass concerts, where the virtual format allows events that are significantly larger than traditional in-person events. Over time, we expect platforms to move beyond just gaming/leisure and into other verticals like education, workplace and healthcare offerings.

Regardless of whether cryptocurrencies are becoming a common form of payment in the real world, they are increasingly being used in gaming via NFTs and blockchain-based studios for initial user payments, and as in-game currencies. As a result, the “crypto Metaverse” suffers from substantially less currency fragmentation than today’s gaming ecosystem (where individual gaming platforms have their own in-game currencies), supports 2-way exchanges (e.g. from USD to cryptocurrency and back), and is widely interoperable (i.e. can be used across different platforms). Payment solution providers with cryptocurrency angles would benefit.

The final group of beneficiaries would be companies which are involved in building the infrastructure that the Metaverse runs on. This include physical devices that would allow us to interact with or access the Metaverse, e.g. VR headsets, smart glasses, augmented reality tools and more. The computing power required to support a persistent, shared environment with unlimited users, in real time, will also grow exponentially. High performance compute and cloud plays in the semiconductor and data centre sectors are potential beneficiaries.

Next, we dive deeper into the semiconductor sector, one of the key pillars that constitute the backbone of the Metaverse.

Semiconductors have had a good run since the beginning of October 2021 as the market turned risk-on, with the PHLX Semiconductor Sector (SOX) Index up 22% (see Chart 2). 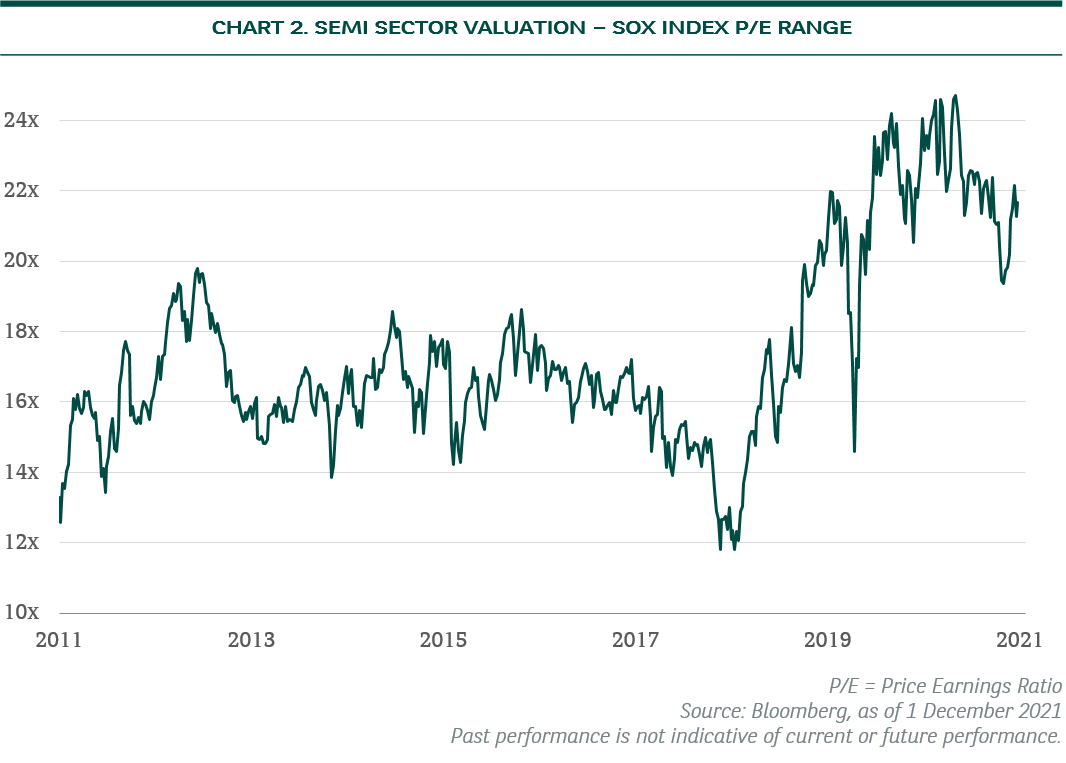 The semiconductor story, as we move past the 3Q21 reporting season, remains one of strong demand and troubled supply chains, with inventories remaining lean in most segments.

We expect the sector to follow the typical seasonal pattern of outperformance in 4Q21 and 1Q22, before taking a breather afterwards.

On the ground, we are seeing mixed performance in different segments of the industry. Strongest trends are seen in compute, while autos and semi equipment are likely to pick up as supply chain issues ease. We are neutral on smartphone and memory, though we think post-correction memory names look interesting.

As a case in point, one of the key hyperscalers in the US recently announced its 2022 capex target, which represents a 66% yoy growth, much higher than consensus expectations. This step-up in spending is a positive read for other hyperscalers engaged in similar artificial intelligence (AI)/machine learning. 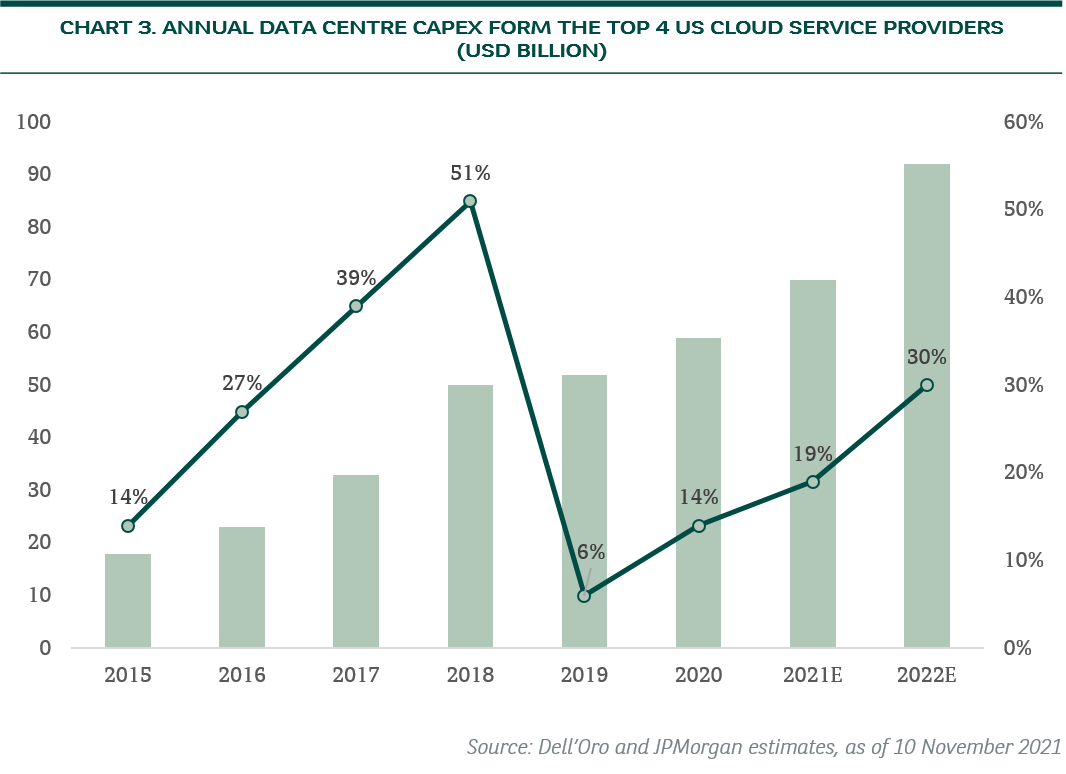 There have been market concerns on over-ordering of auto semiconductors due to the chip supply crunch which may result in unwelcomed inventory build-up down the road.

Auto semis are selling at above auto production rates, as the latter has been impacted by supply-driven shut downs. According to a sell-side report, auto semi production implies more than 90 million units for 2021 vs. auto production forecast of 77 million. Encouragingly, auto semi inventory levels remain below historical average.

Supply shortage issue should ease gradually going forward as foundry allocation to automotive is increasing. Beyond foundry, analog semis have been investing to increase capacity this year (capex has doubled yoy) and into 2022/23, which should have a positive impact on supply in 2022. Meanwhile most analog semi names delivered strong margins in 3Q21 due to pricing power.

Overall, we think auto semi names can continue to perform as production normalises, though price performance may lag that of auto original equipment manufacturers (OEMs). Over the longer term, auto semis are leveraged to rising automotive content as consumer adopt safer, smarter, and more energy-efficient vehicles.

Semiconductor production equipment (SPE) names are benefitting from an environment of strong demand for semiconductors, coupled with tight capacity at key foundries. The capital spending environment is also reinforced by technological transitions to more advanced nodes in both memory and logic spaces, and by tech sovereignty spending as multiple regions look to develop semiconductor manufacturing capabilities.

While 3Q21 results saw most names negatively impacted by supply chain issues, causing lead times to stretch and a push out in revenue, this is resulting in significant unmet tool demand exiting 2021.

Despite recent memory pricing weakness in the spot markets, a key semiconductor equipment company indicated no slowdown in the pace of memory equipment investments heading into next year. Moreover, the company believes that the level of investment needed to sustain the same level of bit growth will be higher over the next five years than the previous five years, with capital intensity being driven by non-linear process scaling and greater process steps. Meanwhile, foundry/logic equipment demand is expected to remain resilient in 2022.

Although revenue growth for SPE names will decelerate next year, visibility stays strong and 2022 will remain another year of growth.

Dynamic random-access memory (DRAM) spot prices have been falling due to a combination of component shortages associated with the PC/smartphone market, as well as weaker demand.

While memory names are likely to remain range bound until the cycle reaccelerates, we note a couple of positive points: (i) key memory companies have already had a sharp correction in share price; (ii) despite weaker PC/smartphone markets (45% of DRAM demand), memory chips should benefit from content gains from data centres (35% of DRAM demand) and autonomous vehicles markets; and (iii) industry consolidation has improved profitability across players.

Sell-side estimates point to an inflection point in DRAM prices in 1H22. Memory players’ share prices tend to discount the peak as well as the trough of the cycle ~3 months before average selling prices (ASPs) change direction. We do not rule out the risk however, that should the current down-cycle last longer or be more severe than expected (due to weaker-than-expected PC/smartphone demand), valuations from a P/B* perspective could derate further towards the lower end of the historical range.