US Equities: Q1 Earnings Sets the Tone for Robust Growth
YOUR WEALTH
HAS A VOICE.
LET IT BE HEARD.

US Equity Perspectives, May 2021

We expect financials to continue to benefit from increased buybacks, improving fundamentals, higher rates over time, and rotation into Value. Our preferred space within US banks stays with names that have a higher capital market bias.

Remain positive on equities, rotation from growth to value not over

The three key drivers for equities globally have not changed: 1) plentiful liquidity thanks to dovish central banks 2) negative long term real yields underpinning valuations and 3) strong rebound in earnings for 2021 and 2022.

We think the big rotation from Growth/Defensives towards Value/Cyclicals is not over. Vaccination, re-opening, and outsized fiscal stimulus will continue to support earnings momentum in these sectors.

With the USD1.9 trillion stimulus package (“American Rescue Plan”) signed into law, we expect the market’s focus to shift to upcoming infrastructure stimulus.

This translates to ~11% of GDP, or ~1.3% impact per year. In order to pay for the proposal, Democrats are proposing to raise the corporate tax rate to 28% and will strengthen the Global Minimum Tax for US Multinational corporations.

The proposed package will benefit broad sectors of the economy including construction materials, capital equipment, green/digital infrastructure, and domestic manufacturing (including semiconductors), amongst others.

The semiconductor sector has been in focus lately due to widespread chip shortages that have impacted global technology and auto companies.

Indeed, semiconductors have outperformed other tech segments by a significant margin year-to-date supported by the pro-cyclical nature of the industry. Our preferred exposure include auto and memory semis, as well as semiconductor equipment companies.

Rotation from Growth/Defensives towards Value/Cyclicals is not over. Vaccination, re-opening, and outsized fiscal stimulus will continue to support earnings momentum in these sectors. Focus on financials, infrastructure stimulus beneficiaries, and semiconductors.

1Q21 earnings season is off to an encouraging start, with 1Q EPS (earnings per share) beating consensus expectations by ~6% at point of writing, led by Financials.

• Trading and investment banking activities remain buoyant. This was reflected across the banks and provided a continuation of the revenue support seen in the last few quarters.

• This has helped offset challenges in loan growth and net interest margins. Excess liquidity and low interest rates have impacted those names with a higher bias towards net interest income.

• Positive outlooks. The overall tone was generally positive as banks indicated a continued improvement in economic conditions. This was reflected in the release of more reserves previously put aside for potential bad debts (see Chart 1).

Banks with a higher capital markets bias are in the sweet spot for trading and a booming investment banking advisory environment as businesses rethink business strategies post-pandemic. This is currently our preferred space within US banks.

Remain positive on Financials but performance will likely take a breather

Despite strong beats, Banks underperformed the S&P500 the day after results, likely due to high expectations already built-in. With rates taking a breather after a ferocious rally since the beginning of the year, we expect Banks’ performance (highly leveraged to rates) to do the same.

Nonetheless, we expect Financials to continue to benefit from increased buybacks, improving fundamentals, higher rates over time, and continued rotation into Value. 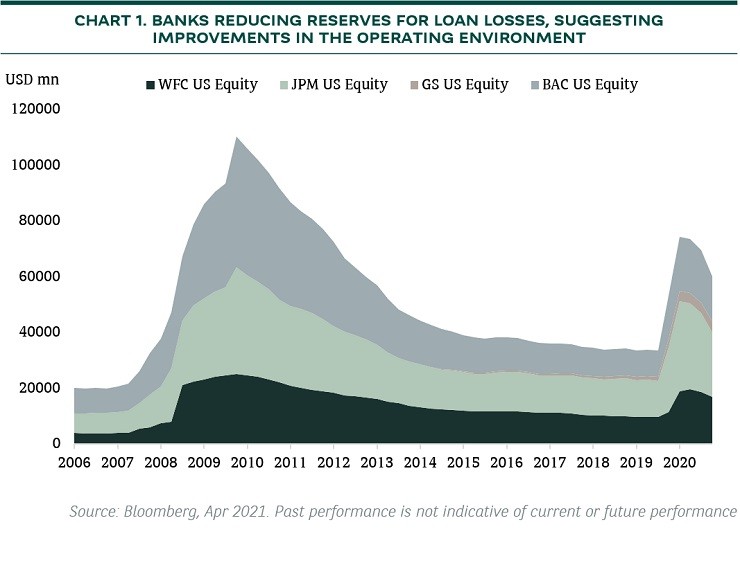 Value and Cyclicals still favored at this point in the cycle

The three key drivers for equities globally have not changed: 1) plentiful liquidity thanks to dovish central banks 2) negative long term real yields underpinning valuations and 3) strong rebound in earnings for 2021 and 2022.

US growth is expected to accelerate to 6.3% this year, with expected earnings growth of 37% for the S&P 500 Index supported by re-opening and fiscal stimulus. Though inflationary pressures will rise this year, the impact will likely be transient given high unemployment and low base effects which should fade by late 2021.

We think the big rotation from Growth/Defensives towards Value/Cyclicals is not over. Vaccination, re-opening, and outsized fiscal stimulus will continue to support earnings momentum in these sectors.

With the USD1.9 trillion stimulus package (“American Rescue Plan”) signed into law, we expect the market’s focus to shift to upcoming infrastructure stimulus.

The White House has announced high level details of President Biden's infrastructure plan, "The American Jobs Plan". The plan envisages spending USD2.25 trillion over 8 years on a wide range of infrastructure initiatives (see Chart 2). This translates to ~11% of GDP, or ~1.3% impact per year. In order to pay for the proposal, President Biden will raise the corporate tax to 28% and will strengthen the Global Minimum Tax for US Multinational corporations.

The bill will now face a tough debate in Congress, where funding from higher corporate and other taxes will surely face Republican pushback. We highlight here the key pillars of the proposed infrastructure plan and the key beneficiaries if the bill were to be passed.

Specifically as it relates to surface transportation, the bill proposes USD621 billion or USD78 billion per annum. Within the USD621 billion, USD115 billion is earmarked for repairing roads and bridges, USD85 billion to modernize transit, USD80 billion for rail and USD174 billion for EV development (grant and incentive programs for state and local governments and the private sector to build a national network of 500,000 EV chargers by 2030, electrify 50,000 diesel transit vehicles and 20% of yellow school bus fleet), amongst others.

The proposed spending amounts on roads and bridges, a key end market for cement and aggregates producers, looked lighter than expected, with broader transportation planned spending including rail, airports and ports, which are less materials intensive.

We assume that the USD115 billion in spending on roads over eight years (or USD14 billion pa) will be incremental to Fixing America’s Surface Transportation Act (FAST Act), the five-year current surface transportation plan. However, this could mean that spending for the new transportation plan replacing FAST Act (which expires in 2021) may be smaller than earlier plans for a 28%-42% increase.

With aggregate names, and construction equipment names running up strong ahead of the infrastructure plan announcement, we think they may take a breather for a while as we await more details of the size of the reauthorized FAST Act in the coming months. Nonetheless we remain buyers on dips, as combined construction spending will likely amount to very decent growth over the next few years.

The plan proposes USD300 billion to retool and revitalise US manufacturing, including investing USD50 billion in semiconductor manufacturing and research as called for in the bipartisan CHIPS Act. There is also USD30 billion proposal to invest in medical countermeasures manufacturing; research and development; and related bio-preparedness and biosecurity to deal with future pandemics. Key beneficiaries would include: (i) Semiconductor equipment companies, which will benefit from additional foundry capex; (ii) Factory automation and equipment plays, for which USD100 billion is set apart for bolstering 5G/digital infrastructure.

The Biden administration sees broadband internet as a basic need like electricity. The President’s plan prioritizes building “future proof” broadband infrastructure in unserved and underserved areas to reach 100% high-speed broadband coverage. About 10% of the population today have no reliable broadband at an acceptable speed. Increased focus on 5G coverage could be positive for 5G infrastructure vendors and the ensuing supply chain,  as well as telcos and telco tower companies.

The proposed infrastructure plan also include:-

USD111 billion for upgrading water systems. The plan includes USD45 billion investments in the Environmental Protection Agency’s Drinking Water State Revolving Fund and in Water Infrastructure Improvements for the Nation Act (WIIN) grants to eliminate all lead pipes and service lines in the country; USD10 billion in funding to monitor and remediate PFAS (per- and polyfluoroalkyl substances) in drinking water; and USD56 billion in grants and low-cost flexible loans to modernize aging water systems. Key beneficiaries include water treatment and water technology companies.

USD100 billion to re-energise America’s power infrastructure, including to modernise power regeneration and deliver clean electricity with a focus on a path to 100% carbon free electricity by 2035. Specifically, the plan proposed a 10 year extension and phase down of an expanded direct pay ITC (investment tax credit) and PTC (production tax credits) for clean energy generation and storage. ITCs, generally used for solar projects, allow taxpayers to deduct a percentage of the cost of installing a solar energy system from their federal taxes. PTCs, on the other hand, are more frequently associated with renewable energy wind projects.

PTCs are a per-kilowatt-hour (kWh) tax credit based on the amount of electricity generated and sold by qualified energy projects. Key beneficiaries include power utilities pivoting aggressively towards renewables. 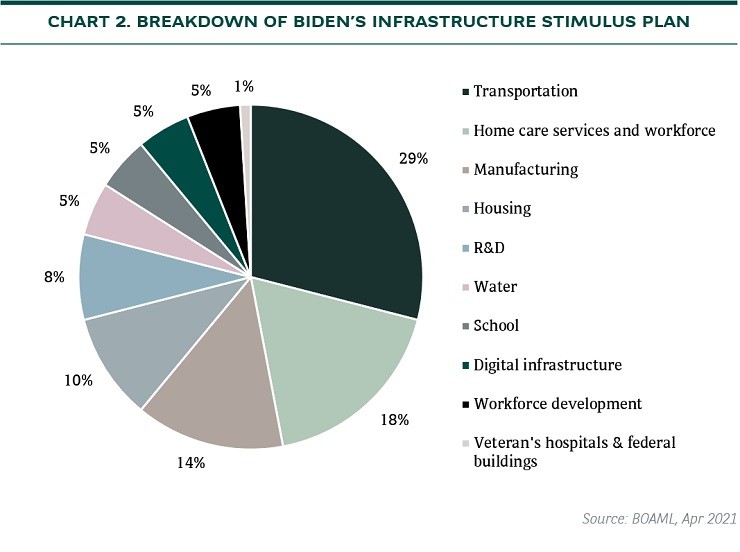 The semiconductor sector has been in focus lately due to widespread chip shortages that have impacted global technology and auto companies.

Indeed, semiconductors have outperformed other Tech segments (which by and large have been big Covid beneficiaries) by a significant margin year-to-date due to the pro-cyclical nature of the industry (see Chart 3). This is especially in segments like memory and auto semis, where the cyclical recovery is driving multiple spots of supply tightness stemming from foundry capacity constraints.

The recent semiconductor component shortages and geopolitical risks have underscored the importance of semiconductor self-sufficiency and the realization that semiconductors are the foundational technology for all innovations in the tech sector.

We believe semiconductor equipment companies will be one of the biggest beneficiaries as national governments (especially US and China) look to strengthen domestic semiconductor manufacturing capabilities, and as foundries expand capacity to meet strong industry demand. We also like auto and memory semis where positive cyclical tailwinds may not have been fully factored into share price.

EV semis – the heart of electrification

Given a typical battery electric car has twice as much semi content at ~USD800 as an ICE car, we believe that average semi content per car can grow from ~USD510 in 2020 to USD1100 by 2030, driving ~11% growth CAGR for the auto semi market over the next decade. 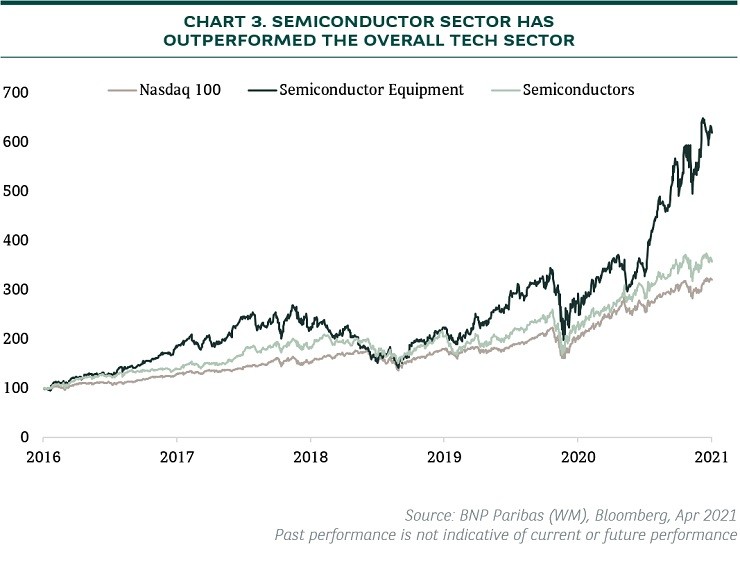 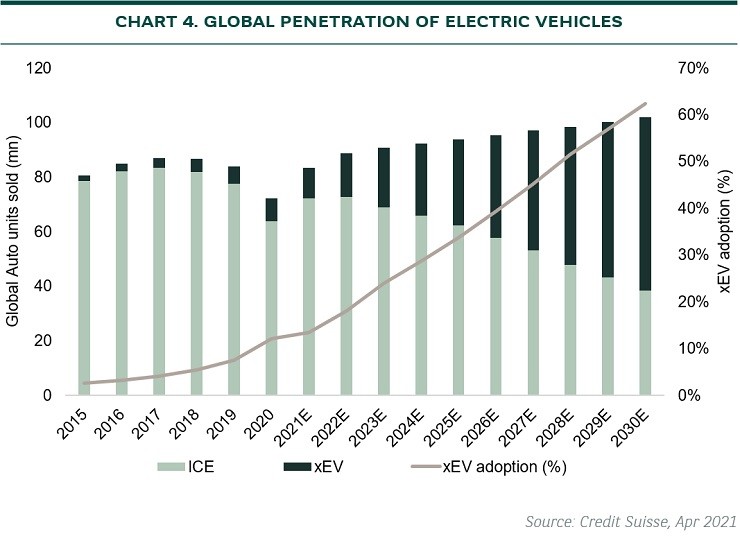