Get Prepared as Currents Collide

The market rebound off June 2022 lows has proven to be short-lived, with the S&P 500 Index pulling back sharply since mid-August after failing to break out of the 200-day moving average resistance.

In our August 2022 issue, we highlighted that the market might be getting ahead of itself anticipating an aggressive Fed pivot in 2023. With inflationary pressures remaining high, stocks and credit markets rebounding, and financial conditions improving, there is less reason for the Fed to back off on the policy rate front.

This has panned out to be true post the Jackson Hole Economic Symposium. Fed Chair Powell's speech has made it very clear that fighting inflation remains a top priority, indicating the Fed’s “overarching focus to bring inflation back down to the 2% goal”, and that “reducing inflation is likely to require a sustained period of below-trend growth”. Fed funds futures are now pricing in (i) a higher probability of a 75bps rate hike for September 2022, coupled with a higher terminal rate and (ii) rate cuts that will not take place as early as hoped. With inflation running well above target, a Fed pivot will likely require much weaker macro data.

On the back of a more hawkish Fed, US 10-year government bond yields traded back up above 3%, while growth stocks suffered a sharp correction. Nonetheless, between growth and value, as the macro environment turns more negative, the value/cyclical trade may start to struggle while we think the performance of growth stocks can gain relative strength, especially those which are reasonably valued. It is with this view that we maintain our neutral weighting on the tech sector. Within the sector, our preference stays with megacaps and software over semiconductors.

It is interesting to note that in terms of earnings revisions, while the earnings revision ratio remains weak, it has improved in August 2022 across all regions including the US (see Figure 1) – perhaps a sign that the number of earnings downgrades is stabilising as earnings cuts have temporarily priced in some deceleration, while we grapple with the depth and shape of the coming slowdown. Meanwhile, 3Q22 GDP forecast is tracking at +0.5% quarter-on-quarter (seasonally adjusted annual rate, SAAR) after two consecutive quarters of negative quarter-on-quarter growth.

Read August issue of US Equity Perspectives:  A Welcome Relief for Equities – Is It Sustainable? 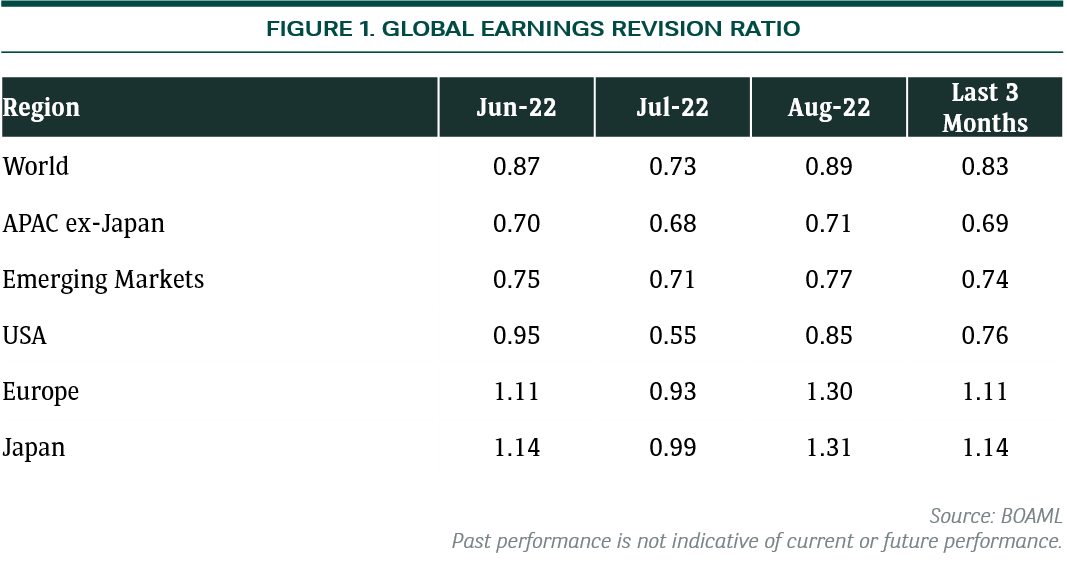 So far the sharp drawdown in S&P 500 this year has been driven by rate-induced valuation derating while the magnitude of earnings cuts at the index level remain muted (~2.5% downward revision for 2022). The path of stocks going forward will likely be determined by earnings, since the multiple adjustment has been significant (for example, at 3600, S&P 500 is trading at 16x P/E (Price Earnings Ratio), which is one standard deviation below historical mean).

The next significant catalysts for stocks will be the September 2022 FOMC (Federal Open Market Committee) meeting (where a smaller-than-expected hike may be construed positively, though this is data-dependent and the probability has shrunk sharply post August CPI data release), and the 3Q22 results season from early to mid-October. A key risk would be Europe, where the worsening energy crisis will weigh on growth in the region, and US stocks with more international exposure will be impacted.

The uncertain earnings backdrop is juxtaposed against seasonality trends. While September tends to be the weakest month of the year for US equities, seasonality tends to improve in Q4, especially in the midterm year of the presidential election cycle. A sell-side study shows that the midterm year tends to show erratic S&P 500 returns from January to September, prior to a strong rally in Q4.

Should earnings trends be not as bad as feared in the short term, markets may hold to a wide trading range (~3600 to 4300 for S&P 500), with the possibility of a rally into year-end.

We continue to favour more defensive positioning, with our preferred sectors being healthcare, selective consumer staples with pricing power, and green/traditional infrastructure plays.

In the following sections, we elaborate on our near-term view on the healthcare and semiconductor sectors.

Healthcare – Inflation Reduction Act does not change our positive thesis

The pharma space is back in the spotlight following the unveiling of the Democrats’ Inflation Reduction Act (IRA). The IRA is largely consistent with the drug price policies proposed, discussed and debated in the Democrats’ Build Back Better Act.

3) Limiting annual drug price increases above the level of inflation.

The Medicare negotiations will continue to garner the most attention as a potential headwind for the US pharma sector, even though they do appear manageable initially. The inflation cap on drug price increases may be neutral, while there may even be a positive tailwind from the Part D redesign.

Overall, there remain questions on the implementation of Medicare price negotiations and the extent of the drug price discounting.

Looking at the current top drugs within Medicare Part B and Part D, the majority targeted by this programme will be near the end of their lifecycles, so the impact would be more muted.

The pharma industry has long argued that allowing Medicare to negotiate drug prices would harm innovation and lead to fewer drug breakthroughs, and will use every avenue to litigate and push back in the coming years. This is likely to be strengthened by the political landscape.

With a conservative Supreme Court and the potential for the House to be overturned in November 2022, additional drug pricing legislation is unlikely in the latter half of Biden’s presidency. And while the expansion of the number of drugs covered is a longer-term risk element, that would again require Democrat control of Congress and a Democrat President.

Recent discussions have focused on the US government’s pricing reform, but the industry only has ~20% exposure to US government payers (Medicare and Medicaid) in aggregate, with a far smaller percentage impacted by the IRA. Companies with higher Medicare exposure could also introduce short-term price premiums on new drugs as an avenue to make up for drugs subject to negotiation.

Overall, analysts expect these reform proposals to only result in modest pharma earnings per share (EPS) dilution starting in 2026. The most significant drug industry concerns are largely focused on the potential for future expansion of Medicare drug price negotiations, which would be unlikely without the Democrats once again controlling both the White House and Congress. As such, the IRA is likely to be as bad as it gets for a while in terms of political pressure on drug pricing – and, fundamentally, it is really not that bad.

Sentiment remains high for US pharma, and we do not think the IRA drug reform will significantly change investor positioning in the group.

Semiconductors – not yet at inflection point

Earnings cuts for semiconductor companies are accelerating on deterioration of the operating environment and recent industry data points:

Inventory correction to last into 1H23

The world’s leading foundry has called for a semiconductor inventory correction from 2H22 into 1H23, as fabless customers are working down inventory due to weaker end-demand trends, elevated inventory build and easing foundry supply.

Estimate cuts are just beginning, and the probability is high that order cancellations may start to materialise when semi supply improves, leading to further inventory build. Further, recent geopolitical moves (e.g. US government limiting the sale of high performance GPU chips to China) may exacerbate the inventory situation. Overall, it is tough for the sector to perform as inventory levels continue to build.

Sub-trend GDP growth typically drives chip sales into negative growth territory, and expectations need to be reset before the uptrend resumes. Considering prior historical trends in a macroeconomic slowdown, current CY23 (Calendar year) consensus expectations (sales +7% year-on-year) could be inflated. We expect the sector to sustainably inflect only when the ISM Manufacturing Index moves to 50 and potentially below, and when inventories peak/show signs of rationalisation. We are not there yet.

Silicon is the new oil

The good news is that semis have already underperformed the broad market by a large margin, and valuations are by and large inexpensive. On the flip side, estimates for 2023 are probably much too sanguine. We think there is a high likelihood that the PHLX Semiconductor Sector Index (SOX Index) will retest the lows reached in July 2022 in the coming months.

Nonetheless, we remain very bullish on semis in the longer term. Semis have become a basic industrial building block (similar to oil) and the digital densification of the global economy should continue to accelerate, driven by structural trends such as artificial intelligence (AI)/machine learning, compute, connectivity, content growth in autos, and the Metaverse.

Once the earnings reset process is done (over the next few quarters), we return to our favourite semiconductor themes as highlighted below.

We think cloud semis are exposed to the strongest long-term trends. Even as hyperscalers slow their operating expenditure in 2023, datacentre capex outlook should still be rather resilient due to workload growth, the shift to AI and new CPU product cycles.

In the last downturn in 2019 (see Figure 2), datacentre semis sales decelerated together with cloud capex, growing <2% year-on-year (vs ~20% in 2018). Consensus outlook for datacentre semis sales growth of ~20-25% for FY23 (Fiscal year) suggests risk to topline, but we could still end up with positive growth rates.

For semiconductor equipment, pushouts from logic and memory producers have begun and semi equipment spending will likely decline through 2023, especially for memory. For example, a major US memory player together with its latest earnings guide-down indicated it will be cutting spending further, with overall capex to be lower in FY23 vs FY22.

Longer term, we still like this segment. Semi equipment spending over the past eight years has outgrown semiconductor industry revenues by about 700 bps per year on rising capital intensity due to increasingly complex manufacturing technologies.

Moreover, we expect the USD52 billion US CHIPS Act (Creating Helpful Incentives to Produce Semiconductors for America Act) to boost domestic chip manufacturing capacity investments and lower hurdles for investment projects. Semi equipment vendors are the key beneficiaries, with the CHIPS Act likely spurring 2-3% incremental capex from 2024 to 2026 from the US and potential multipliers from the race by other governments to increase technology spending.

We view auto semis as a preferred sector to play the auto electrification theme vs. electric vehicle original equipment manufacturer (OEMS), given intense competition and heightened valuations of the latter group.

In the near term, the sector remains supply constrained due to capacity constraints on legacy node foundries. Demand continues to outpace supply, lead times are extended, and margins are high due to higher pricing. Nonetheless, ongoing cyclical concerns will weigh on the sector.

Memory tends to be the most cyclical sector within semis, given its commoditised/transactional nature. Nonetheless, consolidation in the memory sector over the past decade has meant less volatile cycles (peaks and troughs), more supply discipline and higher profitability throughout the cycle.

Longer term, we expect the sector to benefit from accelerating demand for memory in a broad range of market segments, including datacentre (high performance compute requiring more memory and storage), automotive, industrial, mobile and PC. 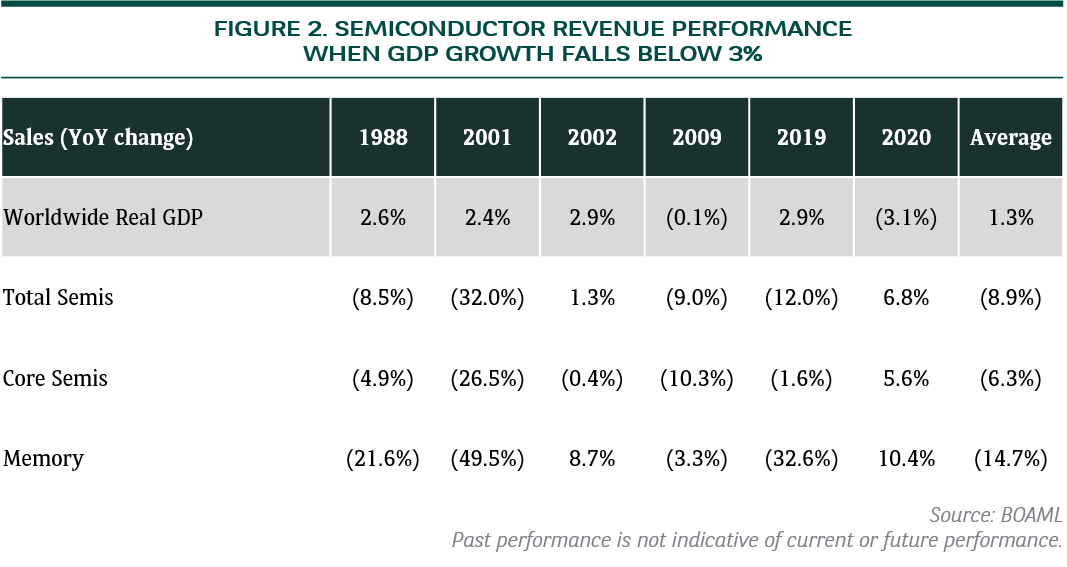