INVESTMENT NAVIGATOR - US Inflation Scare & Tapering Fear
YOUR WEALTH
HAS A VOICE.
LET IT BE HEARD.

The recent higher-than-expected US CPI and strong PCE inflation numbers in April have led to some investor concerns over overheating of the US economy and persistent inflation. However, the Fed officials see the current rise in inflation as “transitory”. What’s our view on inflation? Will this lead to early tightening of monetary policy? What would be the impacts on asset prices?

As 1) to 5) are temporary factors in nature, it is too early to conclude whether this is the start of a sustained inflation uptrend that will force the central bank to tighten aggressively. Are there any indicators that investors should closely watch for a longer term inflation threat?

5. Our base case scenario is that higher inflation is a temporary phenomenon. We expect US CPI inflation to overshoot in 2Q/3Q before declining later this year.

If history is any guide

What is happening now is similar to the inflation scare in 2010-11, when the US economy recovered from the Global Financial Crisis, and  inflation then subsided after several quarters. The chart below indicates that topping out of short-term inflation expectations could be a sign of peaking in US yields. 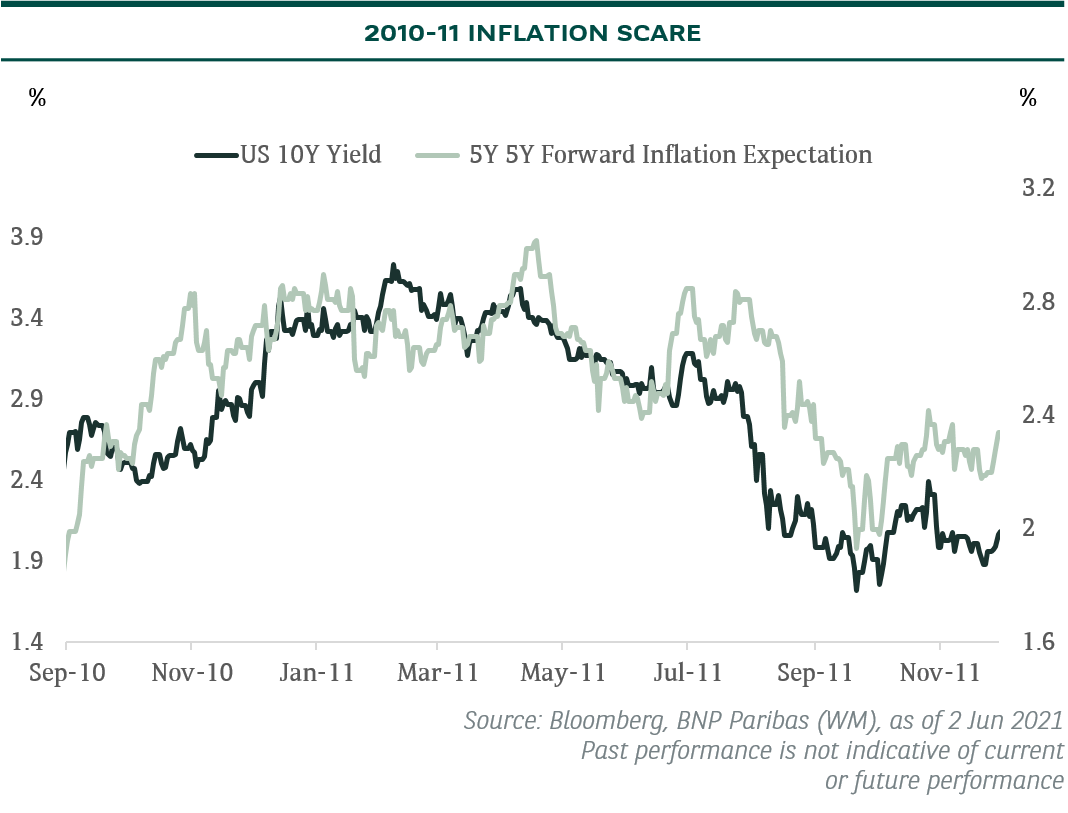 Value/cyclicals tend to outperform when inflation expectation is rising

If you are worried about inflation, our analysis below suggests that materials, financials, industrials and energy show higher positive correlation with rising US inflation expectation. Also, Eurozone (with more cyclical exposure) shows relative outperformance when inflation expectation is in an uptrend.

Furthermore, the underperformance of the tech sector in recent months may imply that once inflation expectations and bond yields peaked, growth stocks may regain their leadership. 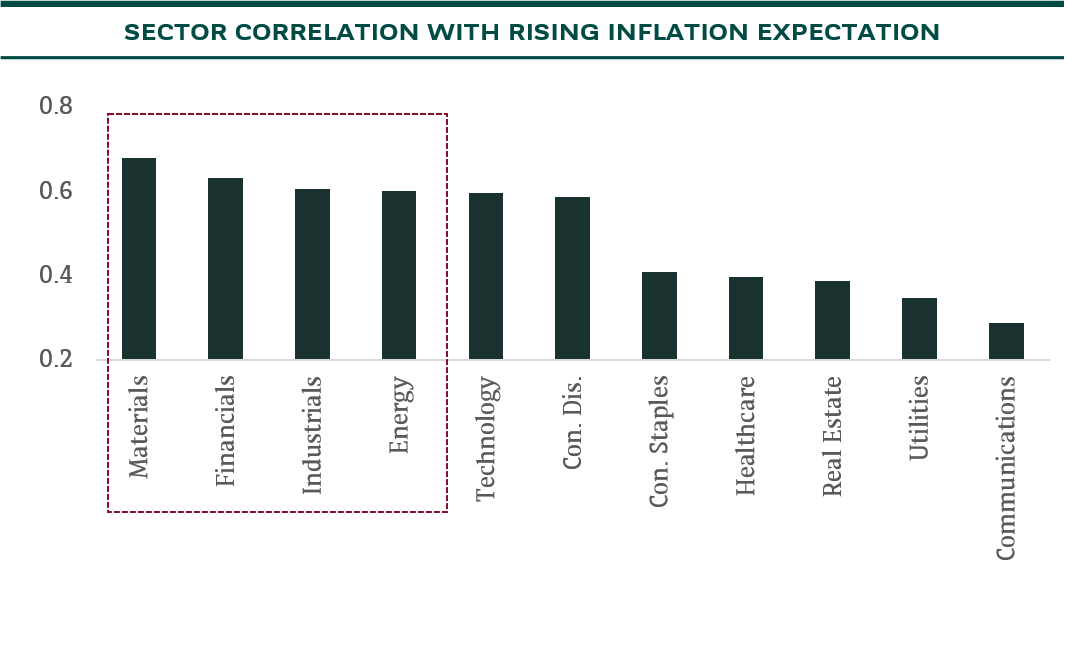 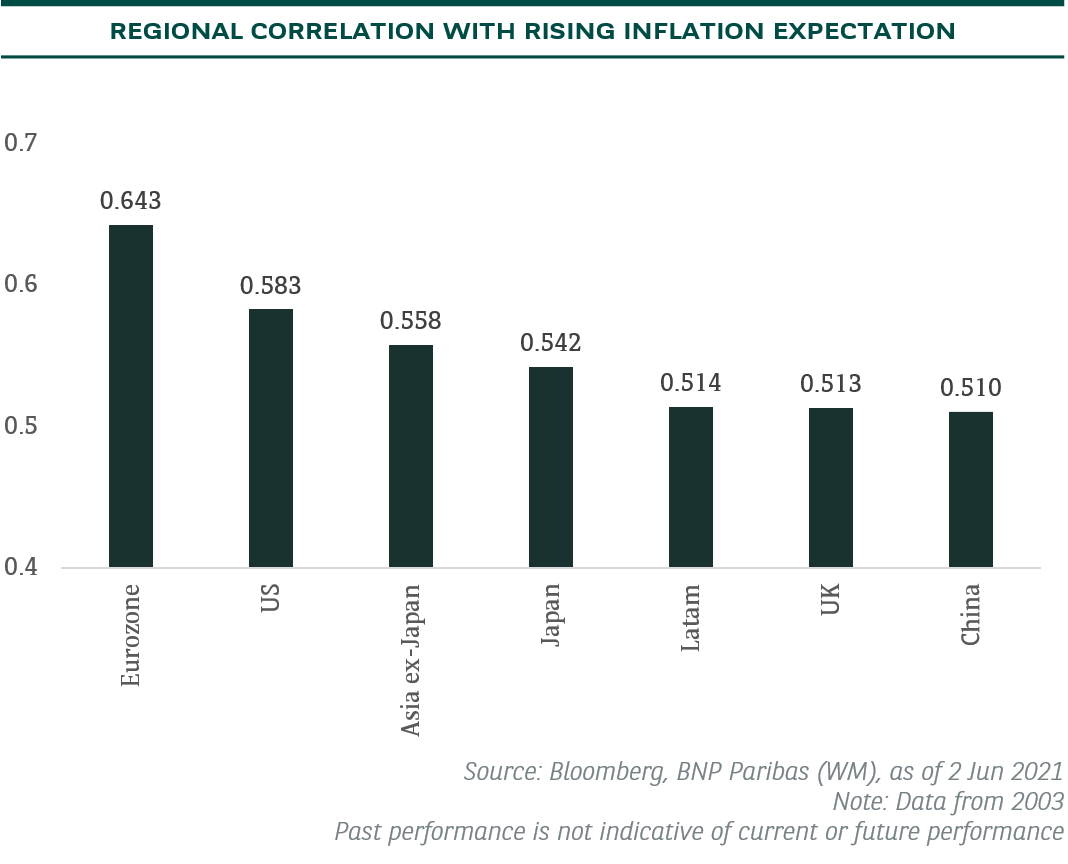 When will the Fed taper?

Inflation expectations stand at 2% (according to the Fed’s own gauge) - a perfect number, not too high, not too low. Thus, unemployment is more of a concern than rising inflation as the latter is seen as transitory.

In our view, the Fed will start discussing tapering at the June meeting and will announce its decision in September. The tapering is likely to be a slow process and to be implemented in early 2022. The tapering could start from the mortgage backed securities (MBS) as the Fed currently holds 32% of the MBS market while the housing market is in good shape.

The chart on the right shows the performance of US 10-year treasury yield, US and emerging markets (EM) equities during 2013, when the Fed announced tapering in May and started implementing it in December. It seems that tapering was less an issue for US equities with S&P 500 having a benign 4% correction after the tapering announcement and rallied into the actual tapering. The US yields also peaked when the implementation started.  Nevertheless, EM equities were more vulnerable to both tapering announcement and actual implementation during 2013.

The impact of tapering could be less pronounced this time compared to the 2013 taper tantrum as the Fed seems to communicate more clearly and hints at a slow move in an attempt to minimise the negative impacts. 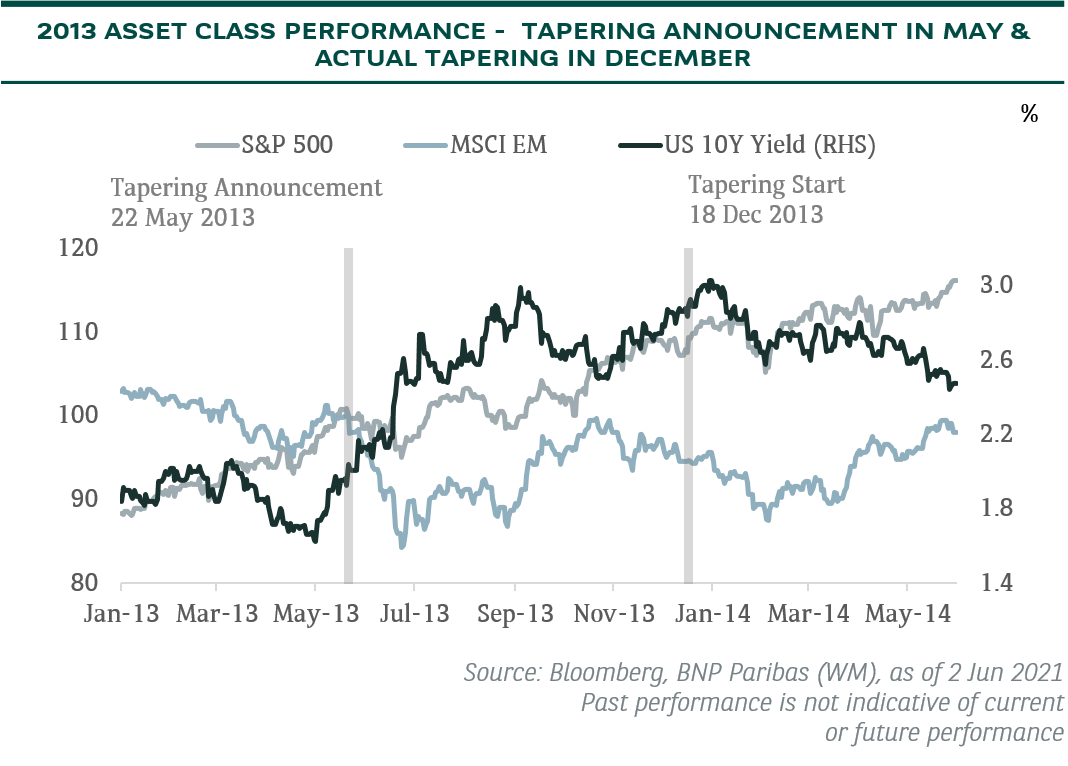 Overview of our CIO Asset Allocation for June 2021 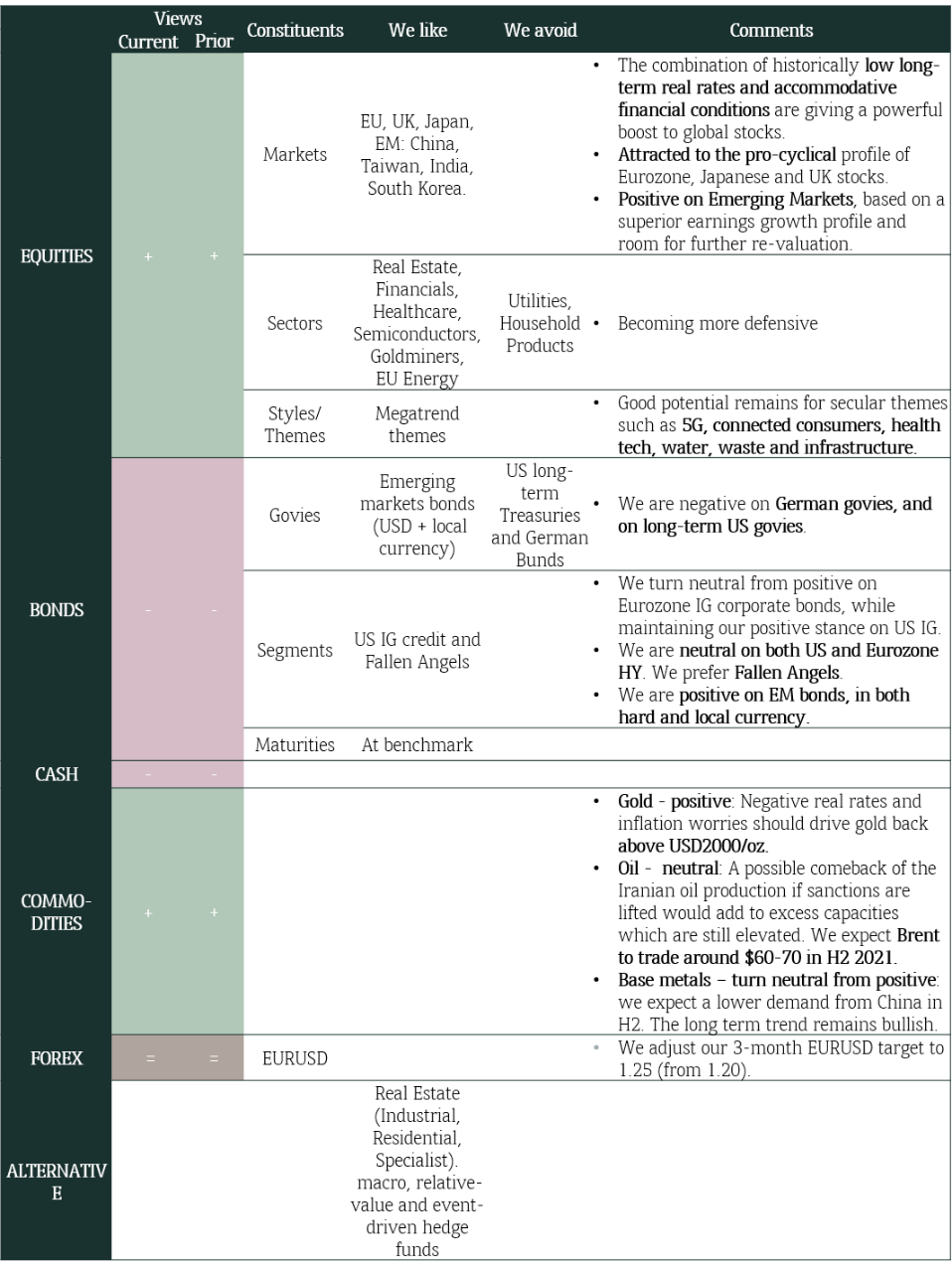 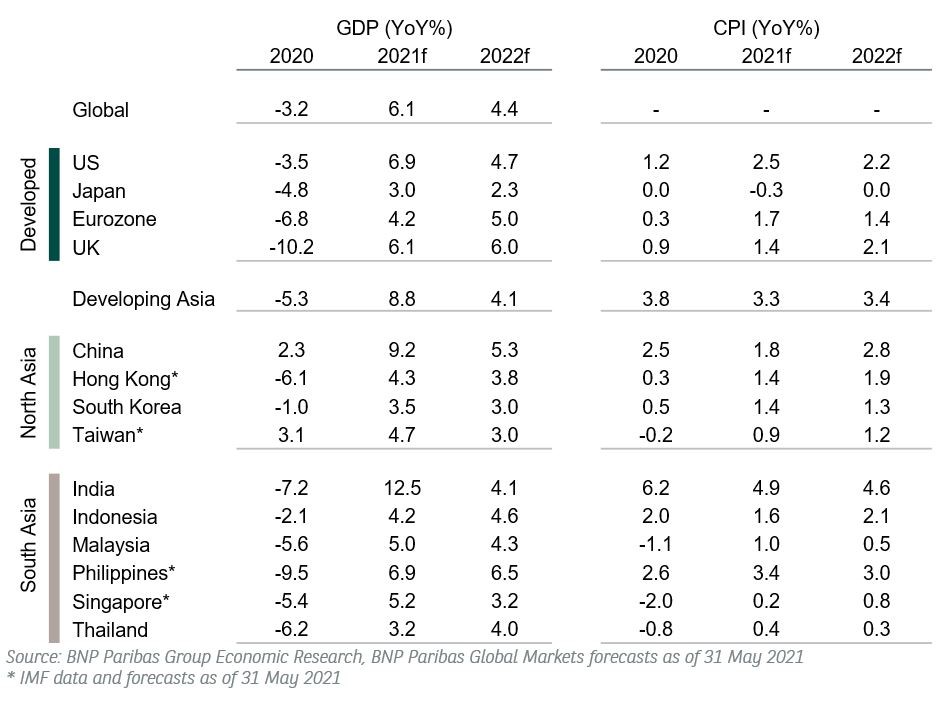 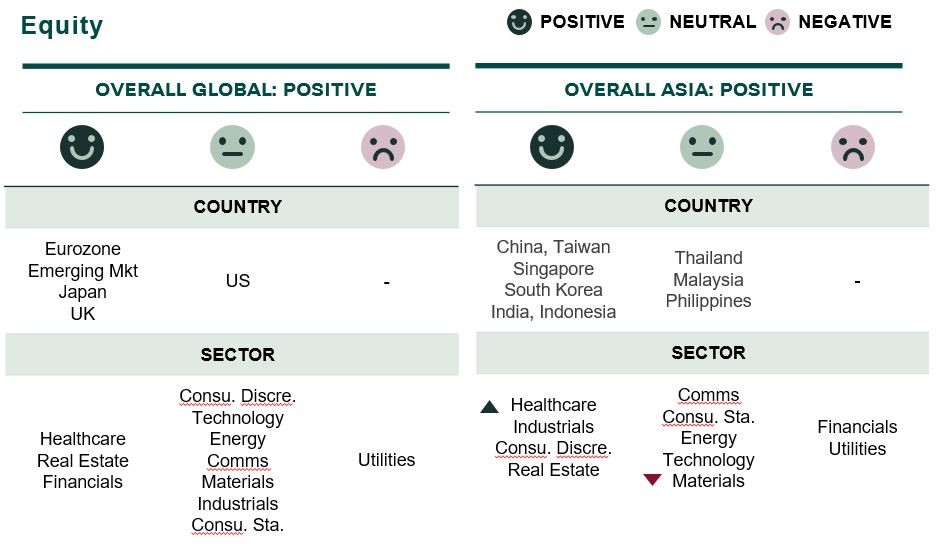 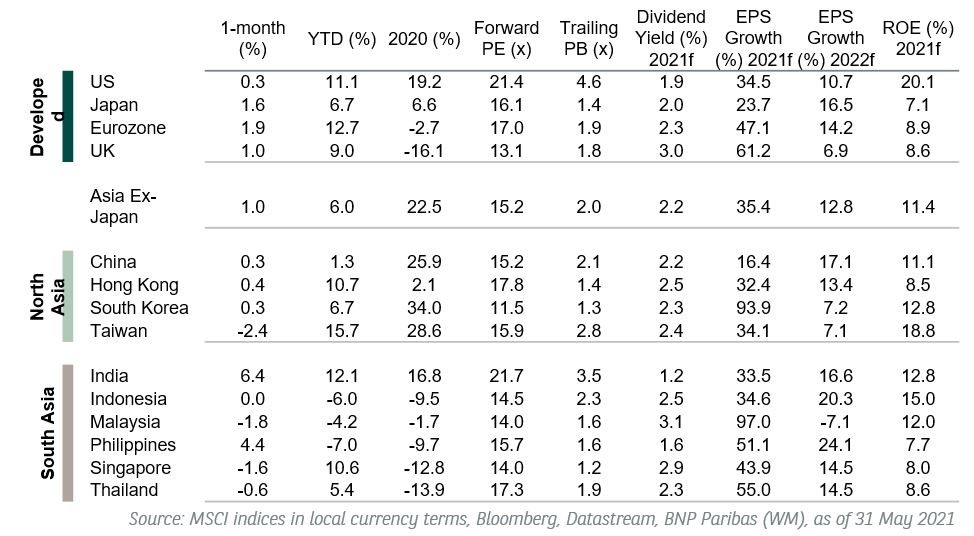 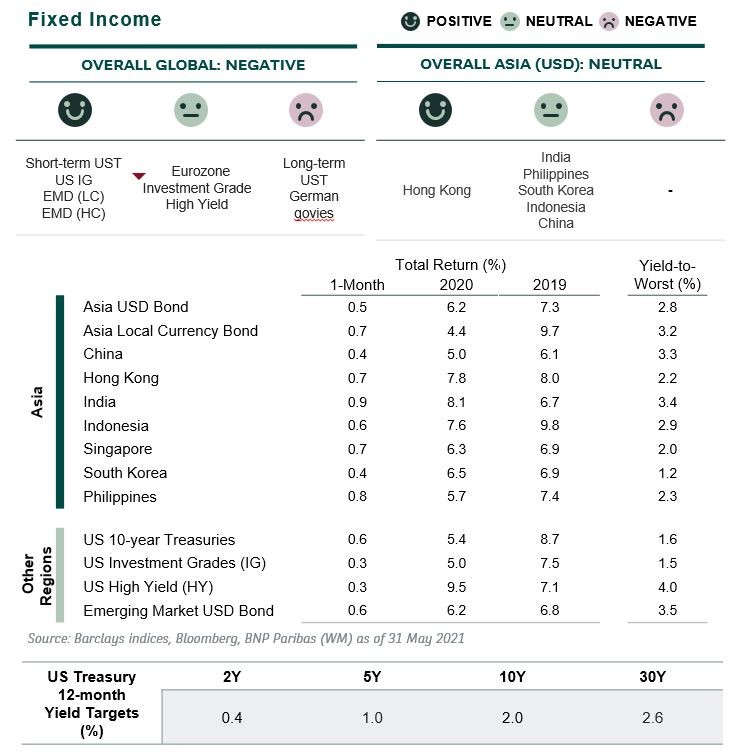 There are talks of vaccination passports to allow cross border travel within Eurozone, which should narrow the region’s GDP growth gap with the US in Q2 and perhaps outgrow the US in Q3. Additional stimulus from the Recovery Fund and the ECB’s potential tapering announcement in June should support the euro. Therefore, we adjust our EURUSD target to 1.25 (from 1.20) for the next 3 months. We keep our 1.25 target in one year.

We also adjust our targets on the CNY to see a rather lateral move over the coming months (6.40 for the 3 and 12-month targets).

OIL: The prospect of a comeback of Iranian exports if sanctions are lifted and the slowly increasing US shale oil production should see Brent trading around $60-70 in the coming months and higher after.

BASE METALS: Our positive stance on base metals has been well rewarded with new all-time highs in copper and tin. But with China’s economy cooling short-term, we take tactical profits and downgrade base metals to neutral. 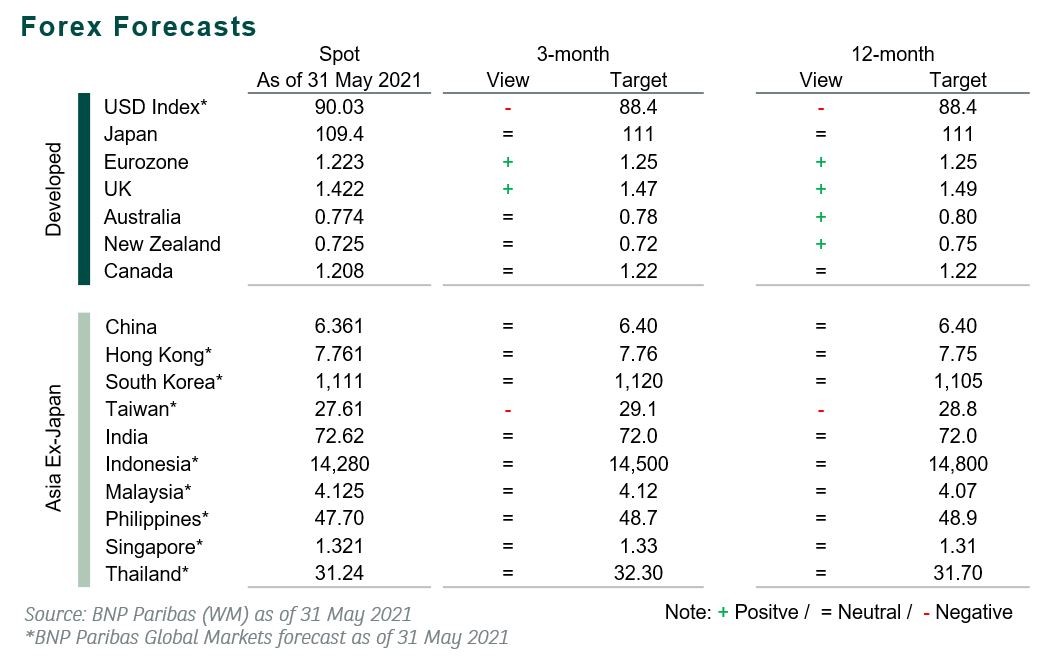