Will the USD continue to gain during the second half of 2018?
YOUR WEALTH
HAS A VOICE.
LET IT BE HEARD.

Mid-Year FX Outlook 2018: Will the USD continue to gain during the second half of 2018?

Developments in the FX market in the first half of 2018 can be divided into two broad themes: USD underperformance in Q1 and USD outperformance in Q2 (the greenback strengthened by 5% in Q2 2018 alone).

Will this trend continue into the second half of 2018? How will this impact other currencies?

The USD struggled in the first half of 2018

The greenback’s muted performance against most of the other majors in Q1 2018 was largely due to optimism stemming from synchronized global growth - the overriding theme for much of 2017.

In its January 2018 World Economic Outlook Update, the International Monetary Fund (IMF) stated that the “pickup in growth has been broad based, with notable upside surprises in Europe and Asia”.

At the same time, market anticipation of the European Central Bank (ECB) ending quantitative easing (QE) earlier than previously expected as well as hopes of a soft Brexit saw the EUR and GBP gain substantial ground on the dollar.

Elsewhere, other currencies, ranging from majors such as the JPY, NZD and CHF, to emerging markets like CNH and SGD, also registered decent gains in Q1 2018.

We then saw a spectacular rebound in the USD’s fortunes as a result of the following developments in Q2 2018:

IS THE DOLLAR BULL RUN SET TO CONTINUE?

As we navigate the second half of 2018, we expect USD strength to continue for the near term as the factors that have contributed to the greenback’s recent outperformance remain largely intact:

Looking further forward however, the dollar bull run is very likely to run out of steam, which is a scenario we expect to see playing out in the longer term. 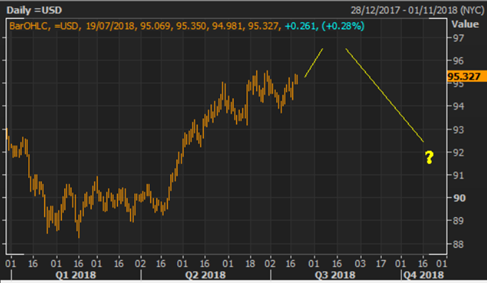 The single currency is expected to be resilient longer term:

The AUD expected to recover later this year:

GBP to endure a continuation of its recent struggles in the near term:

The USD’s recent strength, combined with the yuan’s relative stability, means that the currency has some catching up to do.