Tripled Crowned in "Triple A" Awards – 8 Industry Awards won so far in 2016
YOUR WEALTH
HAS A VOICE.
LET IT BE HEARD. 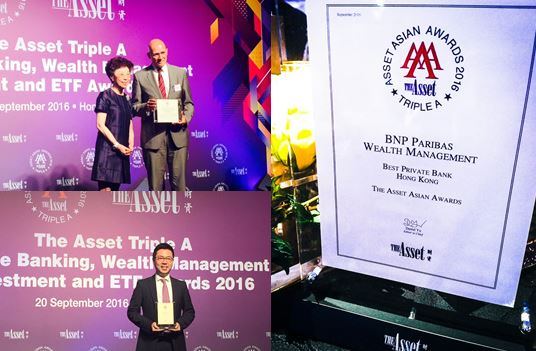 Winners of The Asset’s Triple A Private Banking, Wealth Management, Investment and ETF Awards 2016 were announced at a gala dinner on September 20.  Once again, we were named Best Private Bank, Hong Kong, bringing home the title three years in a row.

Mignonne Cheng, Chairman and Chief Executive Officer, Wealth Management APAC graced the proceedings by presenting the top prize in the leadership category: Private Banker of the Year.  The title was bestowed on her during last year’s ceremony.

Commenting on our consecutive wins, Mignonne said “We are very honored to receive this award three years in a row.  Without doubt, our teamwork, which signifies best-in-class client servicing is key to such achievements”.

Capping a victorious awards season, The Asset win is the latest honour we received this year. Together with the seven awards accorded by Private Banker International and Wealthbriefing Asia, our tally extends to eight.

Discover our awards in Asia