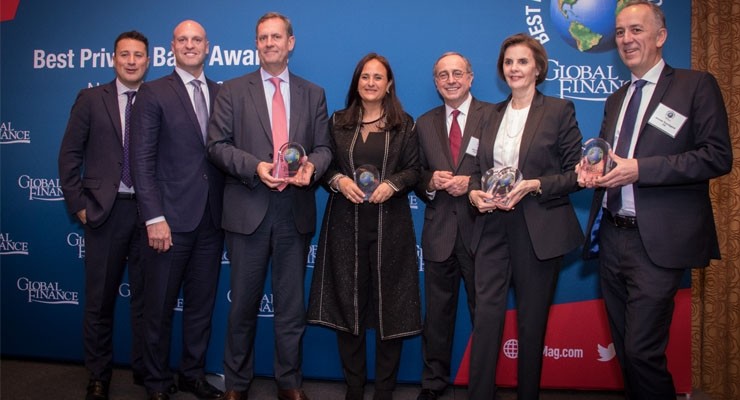 Global Finance magazine has announced its 4th annual World’s Best Private Banks Awards for 2019 and winners have been honored at an Awards Dinner at the Harvard Club of New York City on February 5th, 2019.

These recognitions identify the wealth management teams that are responding most effectively to the mix of challenges and opportunity that characterizes private banking at the start of the 21st century. The winners are those banks that best serve the specialized needs of high-net-worth individuals as they seek to enhance, preserve and pass on their wealth.

In front of 100 international financial leaders in New York City, BNP Paribas Wealth Management has been crowned 5 times, including the most prestigious award: “BEST PRIVATE BANK IN THE WORLD”:

“Private banking is often seen as a battle between Swiss and US-based global giants, with some homegrown Asian tigers challenging them in the fastest-growing markets. But the best-in-business award this year goes to a venerable French institution. BNP Paribas combines European grace and tradition with a thoroughly modern focus on Asia. Its private bank has grown at an average 18% annually there for the past five years, way outstripping most global competitors. Wealth managers everywhere are digitizing, but BNP Paribas brought an original twist to developing its myWealth platform: including hundreds of clients in the process through “incubators” on three continents. A leader in millennial-friendly disciplines like green finance and microfinance through its investment-banking arm, and in philanthropy for its rich clientele, BNP Paribas is well positioned to present a winning image to the rising inheritor generation. There’s nothing backward looking about this icon of Old Europe.” Mentioned the editor of Global Finance Magazine.

World's Best Private Banks 2018: Doing What They Do Best

Global Finance’s editorial board selected the winners for the Private Bank Awards with input from executives and industry insiders. The editors also use information from entries submitted by banks, in addition to independent research, to evaluate a series of objective and subjective factors. Performance data were also drawn from industry sources including Scorpio Partnership’s annual Global Private Banking Benchmark and Asian Private Banker magazine’s regional league tables. Size and growth were a factor, but Global Finance also considered creativity, uniqueness of offering and dedication to private banking as a core business either globally or regionally. This year’s ratings were based on performance during the period covering July 1, 2017 through June 30, 2018.

Global Finance, founded in 1987, has a circulation of 50,050 and readers in 188 countries. Global Finance’s audience includes senior corporate and financial officers responsible for making investment and strategic decisions at multinational companies and financial institutions. Its website — GFMag.com — offers analysis and articles that are the legacy of 31 years of experience in international financial markets. Global Finance is headquartered in New York, with offices around the world. Global Finance regularly selects the top performers among banks and other providers of financial services.