Investing for Better or for Worse

How to survive in an environment threatened by unforeseen shocks

Of course we all remember 2008, the year dominated by one word, “subprime”, and the devastating impact of the US real estate crisis on global financial markets. It was a mammoth shock with dramatic consequences. But who would have thought back in 2007 that we would experience a shock on such a huge scale and that one of the world’s leading banks would collapse? It was totally impossible, unthinkable and absurd.

What is an extreme risk in finance?

The event described above is precisely what we call an extreme risk in finance. It is a shock (in this case financial, but it could also be economic or political), which may cause extreme and unpredictable damage to a financial portfolio. In other words, the extreme risk could be described as an event which triggers a significant financial loss, which comes out of the blue because it has not been predicted or considered likely by economists or common forecasting models. The economist, Nicholas Nassim Taleb, describes these as “black swan” events because for a long time (before the discovery of Australia), Westerners thought that swans were white and that black swans did not exist. The unknown does not exist! And yet, even the unthinkable can happen. As investors, the past decade leaves us in no doubt about this.

And, when we adopt an empirical approach, again we need to be realistic. Indeed, contrary to what certain modelling tools used in the financial markets suggest, stock/asset prices do not obey a normal (Gaussian) statistical law, i.e. a bell-shaped curve. For example, if we use a model based on a normal statistical law, for European equities between January 2000 and December 2016 (see graph below) we would only expect very heavy losses (i.e. monthly loss of more than 8%) to occur for 6 months (out of a total of 204). However, over this period, the loss exceeded 8% over 12 months (i.e. twice as long as the model’s forecast). Another noteworthy point was that during the Lehman Brothers crisis, European equities shed 54% of their value between their high in July 2007 and their low in February 2009, showing that extreme risks exceeded traditional models. 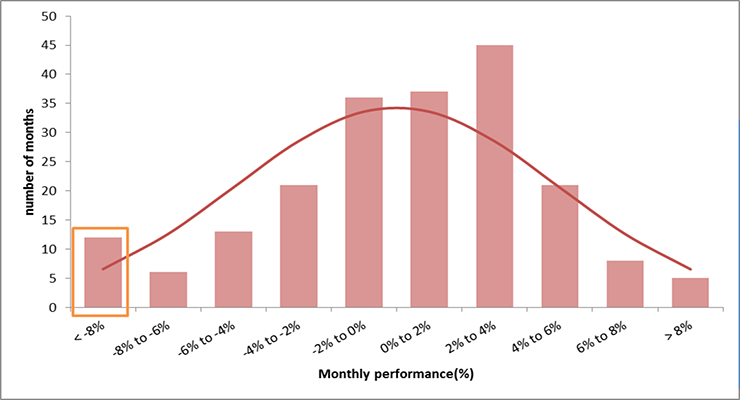 Breakdown of the monthly performance of European equities since January 2000 vs. a model based on a normal law

Also, during crisis periods, volatility levels (particularly in equities) set records, and assets re-correlate, thus limiting the protective effects of diversification. Everything tumbles… In addition to this risk of extreme fluctuations in market values,  other risks (e.g. liquidity, counterparty) appear which in turn create another risk on the whole financial system, known as systemic risk.

So how should we can take into account these extreme risks and protect ourselves against them?

One solution is to take out insurance, but this is often costly in the long term. Hence, it is interesting here to highlight other less costly and very practical approaches (mentioned below) which may offer an equally attractive result, particularly if they are combined:

There have been plenty of shocks in the history of the financial markets: the burst in the dotcom bubble (2000), the subprime crisis (2008), the sovereign debt crisis (summer 2011), etc. The impact of such shocks on portfolios can be disastrous, wiping out long-term savings in one go. So it is preferable to be prepared and consider all this in your long-term portfolio management. As advocated by Andy Grove, co-founder of Intel, “only the paranoid survive”!