The recent dollar comeback should be temporary. For euro based investors, Swedish and Norwegian currencies are attractive.

The United States dollar appreciated versus most of the other major currencies in May, going from 1.20 versus euro to as much as 1.155 in the last days of May before stabilizing around 1.18 at the beginning of June. This sharp appreciation is the result of two main factors. First, the economic momentum remains well in place in the US while other countries saw their economies grow less strongly in the past months. Second, the Federal Reserve is still leaning towards more rate hikes just as most other developed countries have not seen central banks raise rates yet. In our view, the economic soft patch that Europe experienced recently should be temporary. Nonetheless, the euro is unlikely to make a major comeback until economic data strengthen. As a result, we target the EUR/USD at 1.19 in 3 months (value of 1 EUR). Over the coming year, we forecast the EUR/USD at 1.22. We deem that the yield differential between Europe and the US, despite being large, will diminish over time and should not be sufficient to counterbalance the effect of major central banks (among which the ECB) laying out plans to tighten their monetary policies. On top of that, we also note the various structural vulnerabilities facing the USD (especially the expected rise in public deficit).

Since the beginning of May, the British pound mostly oscillated in the 0.77-0.88 range versus the euro. The economic momentum remains relatively weak compared to other G7 countries while prospects are overshadowed by the lack of clarity over what Brexit will really mean for the corporate sector. Indeed, if companies expect the exit to push sales, exports and investment lower overall, UK parties and the government lack of consensus should keep the uncertainty elevated. We see three main factors when looking at the pound. First is the economy which is expected to be relatively weak but unlikely to lead to sharp GBP movement as this outcome is well anticipated. Then there is the central bank. It is a surprise factor which should add volatility depending on the Bank of England hawkishness. Last but not least is Brexit, the risk factor. If negotiations have advanced somewhat, the road to leaving the EU is still long and will likely be tedious. We target the EUR/GBP at 0.88 in both 3 months and 12 months given our relatively “soft” Brexit base case scenario.

The Swedish krona (SEK) and the Norwegian krone (NOK) have both appreciated against euro since May 1st. The strong economic growth in the first quarter associated to better inflation in Norway pushed the EUR/NOK from 9.70 to 9.50 (value of 1 EUR). In Sweden, it was also the better than expected inflation picture than supported the krona in addition to the central bank leaving the door open for raising rate once by the end of the year. As we expect the two Nordic economies to continue to perform well in 2018 and as inflation is likely to pursue its upward trend, we see a strong case for the Norges Bank (Norway central bank) and the Riksbank (Sweden central bank) to turn more hawkish. This should feed to the currencies via higher bond yields and diminished investor’s cautiousness towards both currencies. We target the EUR/NOK at 9.40 in 3 months and 9.10 in 12 months while we expect the EUR/SEK to reach 9.80 in 3 months and 9.30 in 12 months. 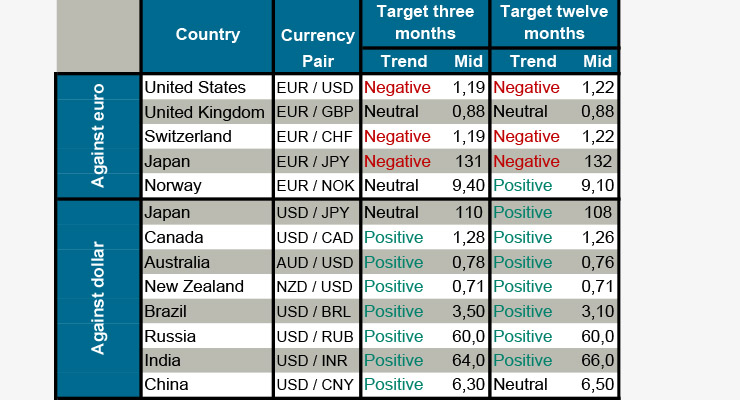