Trade Tensions And Risk Off Mode Continued To Support The USD.

The trend should gradually reverse in the coming months. We continue to favor Norwegian and Swedish currencies against the Euro. 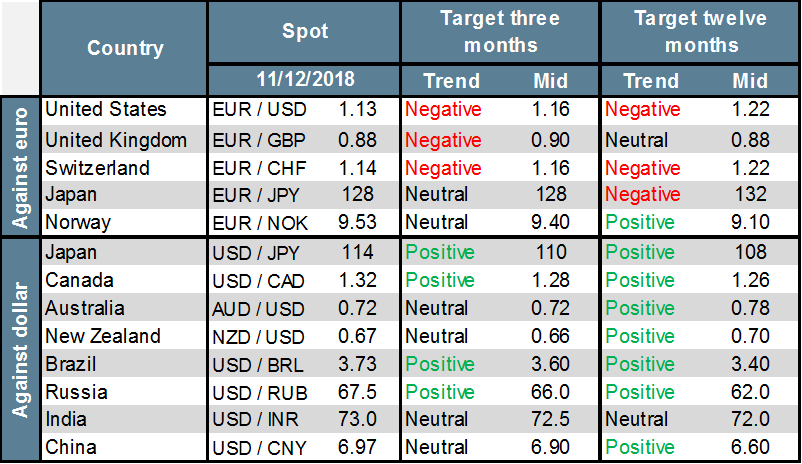 While perceived risks in Eurozone were rising and the US economy continued to perform well, the US dollar appreciated. The EUR/USD which started October around 1.16 has so far fallen to 1.13 in early November. On the one side, the United States economy has been firing on all cylinders, as shown by the recent job report, economic growth in the third quarter and by PMI remaining in expansionary territory. On the other side of the Atlantic, the confrontation between the Italian government and the European Union over the next Italian budget has raised concerns. Moody’s recently downgraded Italy’s credit rating and investors were gauging potential contagion effect. Overall, the impact of the Italian budget debate has mainly impacted Italian assets but also took the EUR/USD lower. In three months the euro will likely remain weak and trade around 1.16 (value of 1 EUR) as geopolitical uncertainties could cap EUR gains. In 12 months, we target the euro at 1.22 given our monetary policy and economic expectations.

In October, Brexit deadlines went on but an agreement has not yet been found. The EU summit in mid-October was expected to bring a breakthrough in negotiations or at least both parties softening their stance and progressing towards the Withdrawal Agreement. Instead of that, both parties stood their ground. Nonetheless, Brexit negotiations advanced in the last part of the month. The EU has removed some contentious phrase of its Brexit plan for Northern Ireland and both parties seem to agree on an option to lengthen the transition period should it prove too short. Given this, the next EU-UK summit (November or December) could see an agreement being signed and both parties pushing the Withdrawal Agreement for approval in parliament. While optimism has increased in recent weeks, we refrain from turning too bullish on the GBP. Important risks still exist, with Withdrawal agreement needed to be ratified by the UK parliament and the transition period that could prove challenging. We maintain our call for the GBP to trade at 0.90 in 3 months (value of 1 EUR) and at 0.88 in 12 months.

Both Australian dollar and New Zealand dollar have depreciated in 2018, by 8.8% for the AUD and by 7.5% for the NZD. The majority of the weakness can be attributed to the relatively strong US dollar while monetary policy divergence between the RBA / RBNZ and the US Federal Reserve also played a role. On top of that, concerns relating to Chinese economic growth and prospects have largely hampered the risk appetite, with the AUD and NZD being used as proxies for the state of the Chinese economy. Given that factors affecting both currencies are unlikely to change over the next three months, we reviewed our AUD forecast to 0.72 and our NZD forecast to 0.66 (value of 1 AUD and 1 NZD versus USD). We also adjusted lower our 12-month targets for the AUD to 0.78 and to 0.70 for the NZD.