Agrifrance 2018 Rural Report: Focus on Agriculture
YOUR WEALTH
HAS A VOICE.
LET IT BE HEARD.

Agrifrance 2018 Rural Report: Focus on the Agriculture Industry in France

Climate in 2017: Milder with Above-Average Temperatures During Nine Months of the Year

The year began with a colder spell compared with the same period in 2016: January temperatures dropped to 2°C below the seasonal average. February made up for the temperature deficit and the spring was milder than usual.
The heat was at its highest in June. The mercury regularly hit 35°C during the month in many regions of France. In early August, scorching weather hit the South-East of the country. On top of the heat, the Provence-Alpes-Côte d’Azur region experienced historical drought conditions, with a rainfall deficit of 35%. Only the North-East of the country totally escaped the drought thanks to several heavy downfalls. Indeed, there was a huge shortage of rain nearly everywhere until October. Cooler temperatures returned in December and rain was widespread. Overall, 2017 was milder and slightly wetter than 2016. 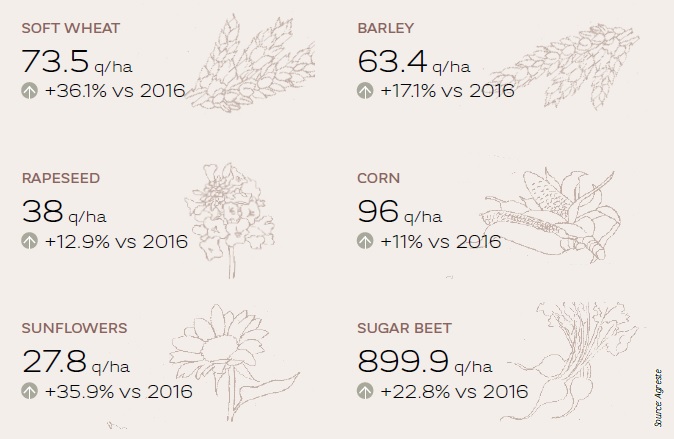 A surge in wheat and corn yields contributed to the 26% annual increase in grain production.

Oilseed production grew by 18% y/y thanks to record yields (especially sunflower seed). The end of quotas led to a marked rise in sugar beet production.

In terms of prices, the larger wheat harvest in Canada supported the upward trend in 2017. Russia is on the verge of becoming the world’s leading exporter of wheat, with a record volume of 32 million tonnes. In Europe,the wheat market comprises two segments. The first, which consists of French wheat with a low protein content (less than 13%), is suffering from world competition, especially Russian exports. The second segment, comprising wheat varieties with a higher protein content (produced last year in Germany and Poland), saw prices hold up better in 2017. The global supply of corn remained abundant, which dragged on prices. Rapeseed prices were pushed down by oils, which were largely impacted by rising stocks of palm oils in Malaysia. However, rapeseed prices should pick up again because global demand remains strong. Indeed, world trade has tripled since 2005; by comparison production has grown by only 60%.