International Trade Tensions: Anticipating The Redistribution Of Roles In Asia

Even before US-China trade tensions emerged, manufacturers were moving their supply chains from China to low-cost regions such as Southeast Asia, India, Eastern Europe and Mexico.  The trade dispute is a wake-up call for companies to grasp the importance of diversifying their production bases.

We believe that trade tensions will accelerate this trend. In the context of this theme we identify the sectors that will benefit from the shift and upgrade in supply chains and we look at their knock-on effects on local consumption markets in the medium to long term. In the 1980s, the sharp appreciation of the dollar caused difficulties in US industries, leading to the signing of the 1985 Plaza Accord (to devalue the dollar against the yen and the deutsche mark). Subsequently, both Japan and Germany faced a significant deterioration in their terms of trade. However, this somehow facilitated their respective industries to move up the value-added ladder in the 1990s in a bid to win back market share. Indeed, this could happen to the Red Dragon.

For the past decade or so, many manufacturers have been moving parts of their supply chains to other Emerging Markets to take advantage of lower wage costs and affordable land prices but also to move up the value-added ladder. Trade tensions have forced companies to think up ways to hedge risks and cut costs, which will likely accelerate the process of shifting and upgrading their supply chains to reduce their length, shorten sourcing times and/or regionalise supply chains to ramp up efficiency.

Looking deeper, when the US imposed an additional 25% tariff on USD 34 billion worth of Chinese goods, with effect from July 2018, figures showed that Germany, Canada, France, Mexico and Thailand were the top 5 “winners” of market share in machinery and electrical equipment exports to the US.

The relocation and upgrade of manufacturing facilities result in higher Capex and an acceleration in automation.

The latter is likely to play a major role along the whole supply chain, providing additional value-added services to customers, such as a greater emphasis on “green production”, design and in-time delivery (shorter order cycle). This would require smart warehouses (run by robots), increased automation for high-speed assembly and packaging as well as enhanced automation in logistics companies.

Meanwhile, Vietnam is on track to become an important low-tech manufacturing production hub.

Favourable demographics and the fast growth of the middle classes in Southeast Asia may strengthen the North-South (Asia) trade corridor, thus reducing reliance on the existing East-West (China-US/Europe) corridor. This process is being facilitated by the free trade agreement between China and ASEAN. Shipping companies, ports, e-commerce players, banks and logistics companies with intra-regional capacities are potential beneficiaries of intra-regional trade growth.

Shifts in production imply employment and income growth in local markets that will have a positive impact on consumption, such as household appliances, consumer electronics and local consumer goods (wholesalers and retailers).

China's enormous scale implies that it is difficult to ignore the country’s essential role in the global supply chain. Nevertheless, shifts in manufacturing already existed before the Sino-US trade tensions as companies were seeking cheaper pastures outside of China. Threats of supply chain disruptions due to ongoing trade disputes are likely to prompt more companies to diversify their production bases.

Shifting manufacturing bases and upgrading supply chains are hugely complex and lengthy exercises. Obviously changes do not happen overnight. The positive impacts on the company/sector winners may only be visible in the medium to long term. 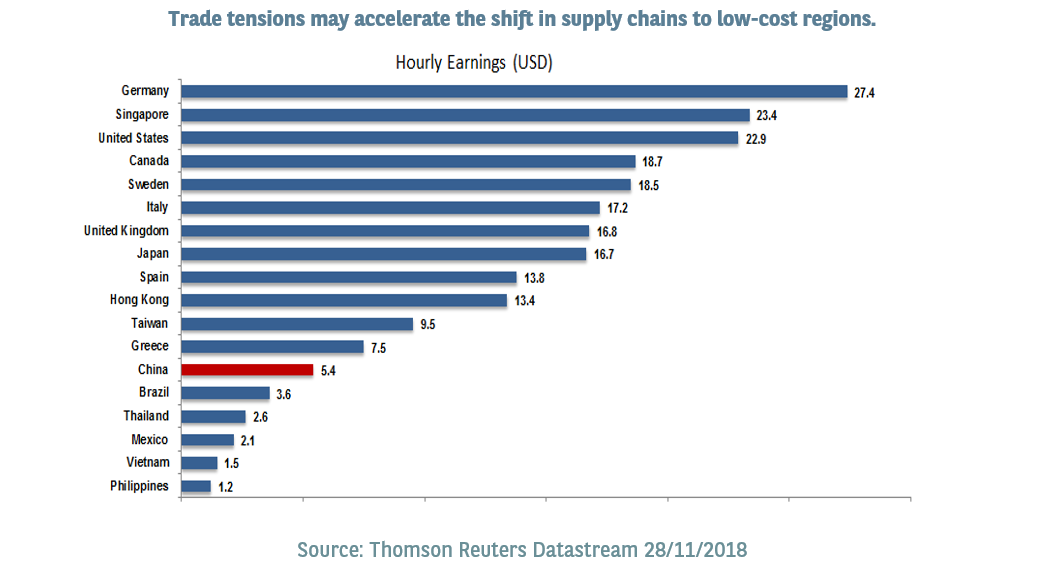