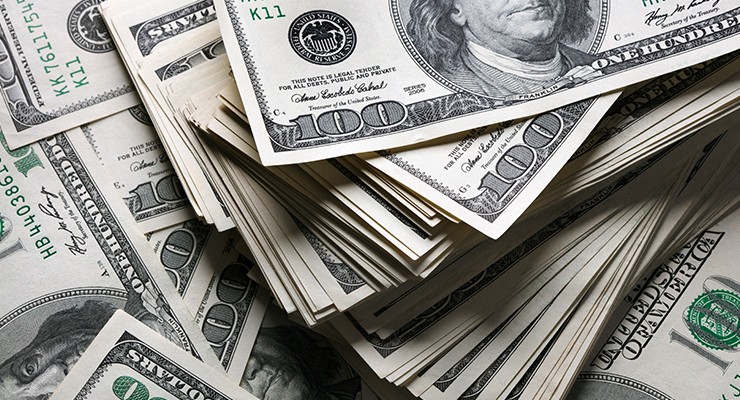 •        There are two key reasons explaining the recent comeback of the dollar: 1) a revised outlook for the US central bank (Fed) interest rate path relative to the ECB and (2) the worsening economic momentum in the Eurozone relative to the US due to COVID resurgence in key countries.

•        The recent sharp move from 1.16 to below 1.12 (value of one euro) is likely to be followed by a temporary bounced but that should be limited in time and in amplitude. Technical indicators suggested an overbought situation.

•        The sharp revisions in our Fed interest rate outlook suggest a structural rise in yield differentials. This should act as a powerful support for the dollar over the coming year. We thus decided to revise our 12-month outlook from 1.18 to 1.12.

What explains the recent dollar strengthening?

The value of one euro (EUR/USD) fell from 1.16 to below 1.12 since early November. This was probably due to higher-than-expected inflation data in the US leading to market expectations that the US central bank will hike rates as early as June 2022. Adding to this, the COVID situation has deteriorated rapidly in the Eurozone. Certain countries, like Austria or Germany, have already moved towards lockdowns or are seriously talking about it. Indeed, hospital admissions have been rising sharply including for emergency care. The so-called stringency index that measures closures at the different levels (school, workplace, restrictions on gathering/ public events etc.) also suggests that restrictions are rising.

Change in outlook for the EURUSD

Our new global economic outlook includes two key assumptions that suggest that any rebound in the euro should be limited in amplitude and short lived. We thus expect the dollar strength to be sustained over the coming quarters. As mentioned, the most important outlook change is regarding the path of monetary policy in the US relative to the eurozone. Indeed, we now expect the Fed accelerate its tapering plan, while using a more hawkish language to pave the way for a first interest rate hike in July 2022. In total, we now forecast three 25bp rate hikes by the US Federal Reserve in 2022, followed by four more in 2023. A quantitative tightening (net reduction of thre balance sheet) is expected in March 2023. In contrast, the ECB is expected to maintain a stimulative monetary policy for much longer. It should slow its bond purchases during 2022 and end net purchases in the first quarter 2023. We forecast a first ECB rate hike of 10 basis points in June 2023. The direct consequence of this scenario change is a sharp widening of the interest rate and yield differentials between the US and the eurozone..

Historically this has been a key driver of exchange rates and suggests a strong dollar for the coming year.

The scope for a short-term rebound of the euro seems limited due to the economic situation. Indeed, the rising probabilities of renewed restrictions linked to COVID in the eurozone has challenged our previous assumption that a catch up of economic momentum would be imminent. The recent evolution on the pandemic in countries like Austria, Germany, the Netherlands, and Belgium for example, suggest more restrictions and thus lower than-expected growth for the coming weeks. We do assume a strong rebound in the region but rather from Q2 onwards. Such an improvement would be already close to the first rate hike in the US that we expect in July. The economic momentum remains strong in the US and lockdowns are less likely despite an expected worsening of the COVID statistics.

Technical analysis has already suggested a temporary rebound. Indeed, the fall in the EURUSD (value of one dollar) has been quite sharp and current levels diverge a lot from the moving averages (see chart 3). The so-called Relative Strength Index (RSI) suggested that the dollar is short-term overbought.  We do not expect this rebound to be lasting over time. We expect quite some volatility but around a broadly lateral trend. We thus forecast the EURUSD to fluctuate around 1.12 both for the coming 3 and 12 months.

Do we underestimate the scarcity of water?

Do we underestimate the scarcity of water?

What reasons are there to be cheerful?

What reasons are there to be cheerful?