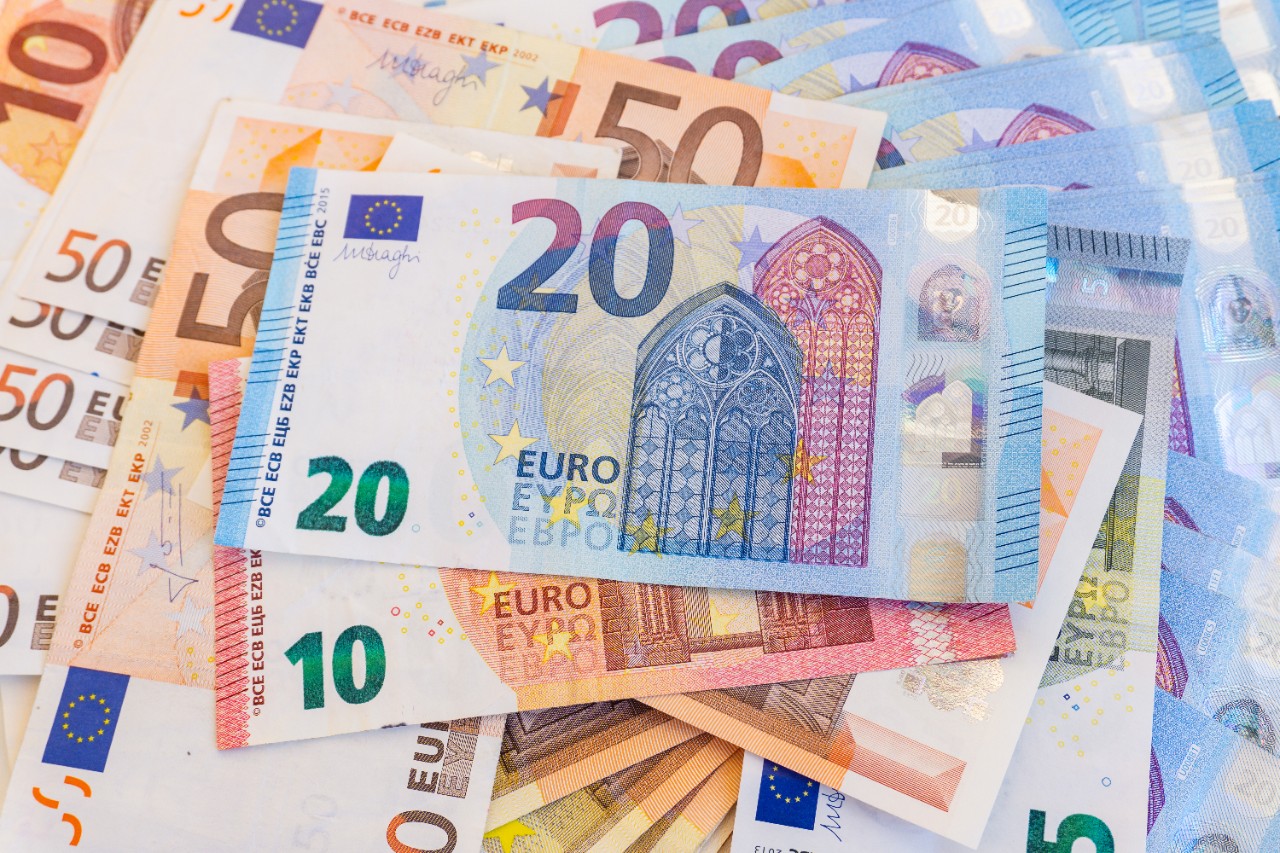 The euro kept strengthening against the greenback in December and spiked at 1.23 (value of one euro) in mid-December. Nevertheless, some European governments decided stricter lockdown measures or pushed back the relaxation of those measures to fight rising infection numbers. This should delay the economic recovery awaited in Q1 2021. Furthermore, there was probably too much optimism regarding the effects of the vaccination campaigns. Given the recent moves, we do not see a major upside for the euro short-term and the dollar should rebound a bit. We revised our target to 1.20 (from our previous forecast 1.18) for the next 3 months.

The expected strong growth recovery in the Eurozone and the strong support from Chinese activity and global trade should be beneficial for global growth and for the euro later this year. Also, the Fed’s shift to targeting an average inflation thus allowing periods of overshoot is likely to push up inflation expectations, even as the Fed continues to cap nominal yields. The resulting decline in real yields and yield differential is supportive for risk sentiment and consistent with a further depreciation of the USD. More US stimulus is expected to come with the Democrats winning the state of Georgia. This should widen the current account deficit which is already high, and this is a further negative driver for the USD. We continue to see a weaker dollar over the next 12 months as we expect the EURUSD trading at 1.25.

Brexit deal and the virus lead the news

The pound sterling has not yet seen a major rebound after the announcement of the Brexit deal. The pound is hovering around GBP0.90 per 1 euro early January. The news of a Brexit deal reduces the uncertainty hanging over the UK economy and supports our forecasts for a sustained recovery over 2021 and 2022. There are however many challenges on the horizon regarding the impact of the change in the UK’s trading relationship with the EU. The Bank of England’s central assumption was already a Brexit deal. The MPC’s reaction function thus still suggests a willingness to act if downside risks materialize, and a strong commitment to look-through upside surprises. We think the threat of Scottish independence is a key theme for the coming months. The new strain of the virus also poses a threat to the UK’s economy if the authorities can’t get it under control. All in all, the outlook for the pound has improved but the upside is still limited. We revise our targets and now expect 0.88 (0.90 previously) over a 3-month horizon and 0.86 (0.88 previously) over a 12- month horizon.

Global economic recovery against the franc

Unemployment increased to 3.5% in December, and is expected to keep rising for some time.  Inflationary pressures remained low with CPI inflation at -0.1% m/m in December.  The SNB continues to favour foreign exchange market interventions over further rate cuts. However, the current policy rate of ˗ 0.75% should not prevent rate cuts if the SNB decides to change its reaction function.

Meanwhile, Switzerland keeps an expansionist monetary policy, supplying the banking system with plenty of liquidity. The base scenario of the SNB is that the covid-related measures should not be eased before the end of Q1 2021.The Swiss currency strengthened beginning of December with EURCHF falling below 1.07 (value of one euro) but ultimately, the EURCHF remained stable over the whole month and 2020 in general.

Low yields, low inflation expectations, the desire of the SNB to cap the appreciation of the CHF together with the expected improvement in the global economic outlook suggest that the franc will weaken over the coming year. We still expect the EURCHF (value of one euro) to rise to 1.11 over the coming year.

The Japanese yen has been rather stable in December, slightly appreciating against the greenback over the month. The yen has gained close to 5% already against the dollar this year and we think it does not have further appreciation potential short-term. Investors’ optimism is boosted by the prospect of the economic recovery supporting the global risk appetite. We thus think the USDJPY will hover around its current level of 104 (value of one dollar) for the next three months.

On the monetary front, the central bank left its policy rate unchanged in December. The BoJ recently extended its lending program by 6 months as the new virus spike could slow the recovery path. The government banned foreign entry in Japan until the end of January as a Covid-19 variant case has been recorded in the country.  Near term, our global bearish view on the USD will be the main catalyst of the USDJPY downward trend. We expect the USDJPY to 102 over the next 12 months.

Trade tensions with China can hurt the AUD

The last time the AUD was so strong was during spring 2018. It gained another 3.1% against the dollar in December, but the momentum seems to be slowing. It has been supported by the global optimism fueled by the vaccination campaigns. The economic indicators are favorable and the continuing economic recovery in China has helped the AUD even further. The Iron ore price keeps rising. However, trade tensions between China and Australia could slow the recovery in 2021. Therefore, we expect a correction towards its 50d moving average (0.73: value of one dollar) due to excessive optimism. Our 3-month target is under review.

Medium-term, the AUD should depreciate somewhat. Given the outlook for both employment and inflation, monetary support will be required for some time and the policy rate is not expected to increase for the coming year. We thus expect the AUDUSD to depreciate.  Our 12-month target of 0.73 (value of one dollar) is however under review.

The NZD recently hit a two-year high. Business and consumer confidence are soaring on the back of optimism fueled by the vaccination campaigns. The economic indicators are favorable but increasing government debt and rising inflation have to be monitored. The impact of closed borders on exports and tourism is also a source of concern.

The central bank of New Zealand’s policy rate (OCR) is still unchanged. Given solid fundamentals of the domestic economy and the still-booming housing market, further easing seems unlikely but the RBNZ is prepared to provide additional support if necessary. The global economic rebound should allow the NZD to maintain its strong level over the coming year. Our 3-month and 12-month targets remain unchanged at 0.69 and 0.71 respectively.

The CAD follows the same trend as the other commodity-related currencies. It hit levels last seen in October 2018, largely reflecting broader USD weakness and the recovery prospects. The CAD underperformed other commodity currencies over the month, but it appreciated 2% against the USD over the year.

In December, Canada lost jobs for the first time since April and further lockdown measures were taken.  Given the government stimulus programs, consumers have built up considerable savings, which should boost the economic recovery when the economy reopens later in 2021. Crude oil prices have witnessed a strong rebound since November and we expect they should remain high. The balance sheet of the BoC has now levelled off as the Bank has slowed the pace of purchases while also lengthening the maturity profile of its buying. It is not expected to raise its overnight policy interest rate this year.

We think that the positive outlook for oil prices and expected closer trade relations with the US will limit the downside for the loonie next year. We keep our USDCAD target at 1.29 over the next 12 months. Our 3- month target of 1.31 is under review.

The Chinese yuan strengthened against the US dollar and was up 6.4% 2020. The positive economic momentum and interest differential relative to the US have been supportive. Economic indicators also hint in favor of a continued strong recovery of Chinese activity. Indeed; exports rose by 21.1% year-on-year in November, much more than expected while industrial production rose by 7%. Retail sales were up 5%, making it this year’s fastest annual increase.  Credit growth indicators also remain well oriented.

China keeps healthy fundamentals. The long term environment should be supportive for the CNY. The economic recovery is expected to accelerate later this year which should fuel global trade. Moreover, the expected global dollar weakness should support the USDCNY. Given the strong appreciation of the yuan this year and how the momentum seems to be slowing (+0.7% in December), we think the CNY should stabilize.

We think the CNY should fluctuate around its 50d moving average of 6.6 (value of one dollar) over the next 3 months. Over the next 12 months, we keep our target at 6.5.